We included all patients with achalasia who underwent POEM at our hospital from August 2011 to October 2012 and had complete GERD evaluation with ≥ 3 years of follow-up. They were divided into circular or full-thickness myotomy groups according to the depth of myotomy. Demographics, Eckardt score, manometry results, 24-h pH monitoring, and GERD symptoms were recorded and compared between the two groups.

Core tip: Gastroesophageal reflux disease (GERD) is a major concern following peroral endoscopic myotomy for achalasia. Although short-term follow-up did not show an increased rate of GERD in patients who received full-thickness myotomy compared with circular myotomy, the long-term difference is still unknown. We found that full-thickness myotomy is associated with a higher rate of clinically relevant GERD.

Achalasia is a rare primary esophageal dysmotility disorder characterized by failed relaxation of the lower esophageal sphincter (LES) and absence of peristalsis of the distal esophagus[1]. All therapeutic options focus on reducing the pressure gradient across the LES, which can result in potential gastroesophageal reflux disease (GERD). Therefore, an antireflux procedure is usually added to surgical myotomy, and it has been proven useful in reducing the rate of postoperative GERD[2,3]. Peroral endoscopic myotomy (POEM) is an endoscopic, minimally invasive treatment for achalasia in which myotomy is performed within a submucosal tunnel approached from the esophageal lumen, and this procedure can relieve symptoms and improve quality of life[4,5]. In contrast to Heller myotomy, no antireflux procedure is included in POEM, and the reported rates of postoperative reflux have varied widely, from 0% to 53%[6-9]. To reduce GERD, circular myotomy without disturbing the longitudinal muscle is usually recommended by most researchers[6,9,10]. Some researchers have performed full-thickness myotomy, and several clinical studies have demonstrated that full-thickness myotomy can accelerate recovery of esophageal emptying and reduce operating time, while not increasing the rate of GERD[11,12]. However, these studies had only short-term follow-up, and whether full-thickness myotomy increases the rate of GERD in the long term is still unknown.

The aims of the present study were to compare the long-term occurrence of GERD in achalasia patients treated with circular or full-thickness myotomy during POEM, and to identify the predictive factors of postoperative GERD.

This was a single-center retrospective study conducted in China. The study was approved by the Ethics Committee of the Second Xiangya Hospital of Central South University, Changsha, China, and all the participants gave signed informed consent. One hundred and ten patients with achalasia underwent POEM at our hospital between August 2011 and October 2012. In the beginning, simple circular myotomy was performed for all patients with achalasia and there were 32 patients included, but we found that some patients did not receive satisfactory outcome. So, we began to perform full-thickness myotomy beginning in March 2012, and there were 24 patients enrolled in total. Each patient was called back for an assessment of GERD at least 3 years after POEM. Only patients who underwent a complete assessment of GERD, including symptom evaluation (including Eckardt score[13] and GerdQ score[14]), esophagogastroduodenoscopy (EGD), high-resolution manometry (HRM) and esophageal pH monitoring were included in the study. The patients’ demographics and clinical history, perioperative data, myotomy type, and follow-up data were retrospectively collected and recorded.

POEM was performed as previously described under general anesthesia via intratracheal intubation, with the patient in the left lateral position[13]: (1) a submucosal injection into the posterior esophageal wall (5 o’clock position) was administered at 8-10 cm above the esophagogastric junction (EGJ); (2) a 2-3-cm longitudinal mucosal incision was made to create a tunnel entry; (3) a submucosal tunnel was created, passing over the EGJ, and approximately 3 cm into the proximal stomach; (4) myotomy was started from 2 to 3 cm below the tunnel entry. Some patients received circular myotomy alone and others received full-thickness myotomy at approximately 3 cm above or below the EGJ; and (5) several metal clips were applied to close the mucosal entry. Figures 1 and 2 describe the procedure of circular and full-thickness myotomy. Patients were maintained as nil by mouth for 24 h with a liquid diet for 3 d, and returned gradually to a normal diet within 2 wk. Intravenous proton pump inhibitor (PPI) was used for 3 d. 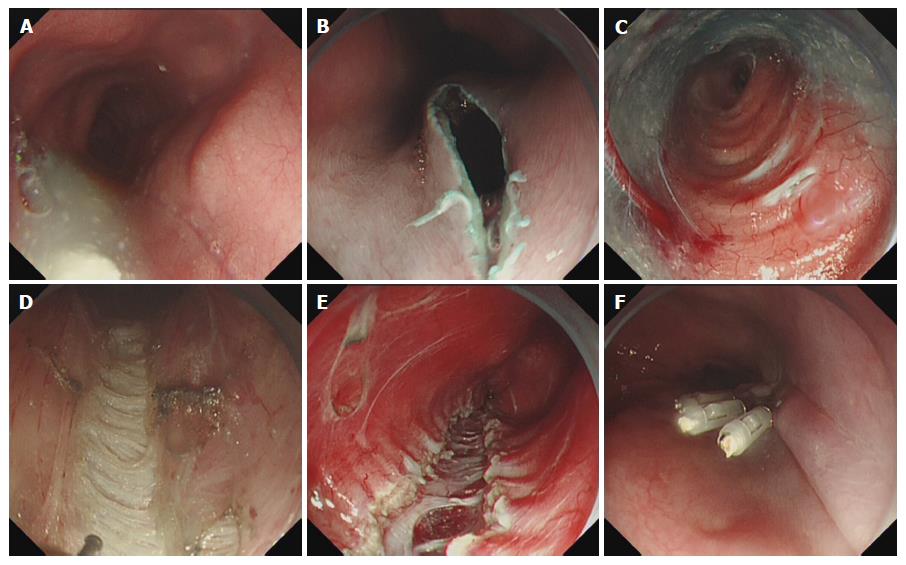 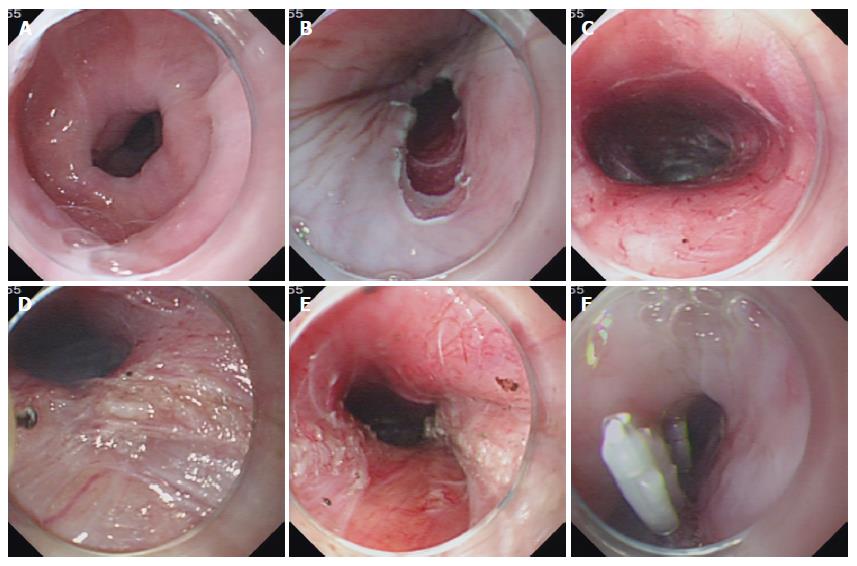 HRM was done using a solid-state manometric assembly with 36 pressure sensors spaced at 1-cm intervals (Manoscan ESO; Given Imaging, Yoqneam, Israel). The HRM assembly was placed transnasally and the manometric catheter was positioned to record from the hypopharynx to the stomach with approximately five intragastric sensors. The manometric protocol included a 5-min period to assess basal LES pressure (LESP), 10 water swallows of 5 mL each, and one water swallow each of 1 mL (dry), 10 mL and 20 mL. Basal LESP and average 4-s integrated relaxation pressure (4sIRP) were recorded.

Twenty-four-hour esophageal pH monitoring (Digitrapper pH-Z Monitoring; Given Imaging) was carried out before EGD. The pH-monitoring catheter with two sensors was introduced transnasally into the esophagus. One of the two sensors was pushed through the EGJ into the stomach; the other sensor was kept approximately 5 cm proximal to the EGJ. Data were recorded for 24 h. Measurements were always carried out after cessation of acid-suppressive medication for at least 7 d. In the analysis of pH signals, episodes with pH < 4 caused by stasis-associated acidification of esophageal contents were discarded.

Fifty-four of the original 110 cases were not included in the present study. We enrolled 56 patients (mean age: 42 years, range: 14-71 years; female/male: 30/26) with completed assessment of GERD (Figure 3). Thirty-two patients received circular myotomy and 24 received full-thickness myotomy. All of the patients underwent POEM, and treatment success (defined as Eckardt score ≤ 3) was achieved in all 56 patients during a mean follow-up of 39.3 mo. Mean Eckardt score decreased significantly from 6.5 ± 1.4 (baseline value) to 0.4 ± 0.7 (P < 0.001). Postoperative mean basal LESP and 4sIRP were significantly lower compared to the preoperative values (39.0 ± 6.6 and 28.6 ± 5.1 mmHg vs 14.4 ± 3.4 and 10.5 ± 2.6 mmHg, respectively, P < 0.01). There was no significant difference between circular and full-thickness myotomy in terms of treatment success, pre- and postoperative esophageal manometry and Eckardt score (Table 1). 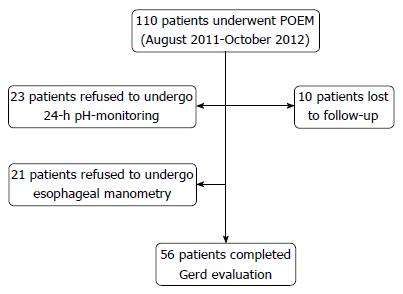 Postoperative abnormal esophageal acid exposure was attested in 25 patients (44.6%). A total of 13 patients (23.2%) had GERD symptoms and 12 had esophagitis (21.4%). Overall, clinically relevant GERD (abnormal esophageal acid exposure, associated with GERD symptoms and/or esophagitis) was diagnosed in 13 patients (23.2%). Among the 12 cases of esophagitis, five were Los Angeles Grade A and seven were Grade B (Figure 4). Patients with GERD symptoms had complete clinical remission under standard PPI therapy (i.e., pantoprazole 40 mg q.d. or lansoprazole 30 mg q.d.). In cases of esophagitis, double-dose PPI (i.e., esomeprazole 40 mg b.i.d. or lansoprazole 30 mg b.i.d.) was prescribed for 6 wk. A follow-up EGD was carried out 6 wk after diagnosis and PPI therapy. Esophagitis healed completely in all patients, and no cases of Barrett’s esophagus were diagnosed.

Each treatment of achalasia aims at reducing basal and swallow-induced pressure of LES to relieve symptoms, facilitate esophageal emptying and prevent development of mega-esophagus[1]. However, iatrogenic GERD caused by decreased LESP is a common concern after endoscopic or surgical treatment of achalasia. GERD can cause symptoms such as heartburn and reflux, which impair quality of life of affected patients and increase their economic burden. Some GERD patients may develop esophagitis with the possible, even if rare, evolution of peptic stricture, Barrett’s esophagus and even esophageal adenocarcinoma[17,18]. Thus, preventing postoperative GERD is important for patients who receive endoscopic or surgical treatment of achalasia. In Heller myotomy, which is still the standard method for treating achalasia, it is accepted that partial fundoplication is mandatory and effective for reducing the incidence of postoperative GERD[2,3]. POEM is an endoscopic treatment for achalasia in which myotomy is performed within a submucosal tunnel approached from the esophageal lumen, and because it includes no antireflux procedure, it has the potential to cause GERD.

The reported rates of prevalence of GERD after POEM vary from 0% to 53%[6-9]. Some of this variability may relate to differences in subjective and objective measurements of GERD. Rarely, GERD was systematically evaluated on the entire POEM population with EGD, HRM and pH monitoring. Familiari et al[15] enrolled 103 patients, and found that 50.5% had abnormal esophageal acid exposure, 18.4% had heartburn, 20.4% had esophagitis, and 29.1% had clinically relevant GERD. In the present study, postoperative esophageal acid exposure was found in 44.6% of the patients, 23.2% had GERD symptoms, 21.4% had esophagitis, and 23.2% had clinically relevant GERD, which was consistent with Familiari’s study[15]. Jones et al[14] found that 58% (15/26) of the achalasia patients had abnormal pH test results after POEM, and subjective symptoms were not correlated with pH test results. Our study also found that not all the patients with abnormal pH test results (25/56) had GERD symptoms (13/56).

The present study had several limitations. First, this was a retrospective study, and only some of our patients who underwent complete assessment of GERD were included. Some of the patients were lost to follow-up or refused to undergo pH testing or HRM. This bias affected the chances of calculating the real prevalence of GERD after POEM, as those who had symptoms were more likely to undergo the assessment. Second, GERD evaluation was done only for those with a minimum follow-up of 3 years, thus we do not know how postoperative GERD changes with time. GERD is regarded as a late complication after POEM, and its incidence increases with time[7]. Thus, GERD evaluation should also be carried out at 5 years, 10 years or even longer after POEM. Third, depth of myotomy was the only perioperative data that we measured. Other data such as myotomy length (all patients underwent a standard myotomy length) and orientation of myotomy (all patients underwent posterior myotomy) were not included in the study. As a consequence, it is not possible to define whether these parameters are associated with postoperative GERD.

In conclusion, our study shows that the treatment efficacy and manometry outcomes were comparable between the circular and full-thickness myotomy groups. However, patients with full-thickness myotomy and low postoperative 4sIRP may have a higher rate of clinically relevant GERD. Randomized, large-scale studies are warranted to confirm our conclusions.

All therapeutic options for achalasia focus on reducing the pressure gradient across the lower esophageal sphincter (LES), and an antireflux procedure is generally recommended in surgery to reduce the risk of potential gastroesophageal reflux disease (GERD). In contrast to Heller myotomy, no antireflux procedure is included in peroral endoscopic myotomy (POEM), especially full-thickness myotomy, and the rate of postoperative reflux varies from 0% to 53%.

In the present study, the authors have demonstrated that achalasia patients who received full-thickness myotomy during POEM had a higher rate of postoperative GERD without obvious advantages of better efficacy than circular myotomy, which suggest that circular myotomy is optimal during POEM for achalasia.

Full-thickness myotomy is a type of POEM that includes completeness of myotomy involving both circular and longitudinal muscle fibers to preserve long-term reduction of LES pressure. GERD is a chronic condition with mucosal damage caused by stomach acid coming up from the stomach into the esophagus. Occasional reflux causes heartburn, but chronic reflux leads to reflux esophagitis, GERD, and sometimes Barrett’s esophagus.

In this study, the authors analyzed the result of POEM and the incidence of GERD in a group of 56 patients who underwent POEM for esophageal achalasia and received a full assessment for GERD 3 years after the procedure. The authors have presented interesting new insights on iatrogenic GERD rates for different types of POEM procedures for a respectable follow-up period.