Cyclophosphamide is a potent cytotoxic agent used in many clinical settings. The main risks of cyclophosphamide therapy include hematological disorders, infertility, hemorrhagic cystitis and malignancies. Gastrointestinal side effects reported to date are often non-specific and not severe. We present the first case of a fatal small bowel enteritis and pan-colitis which appears to be associated with cyclophosphamide. We aim to raise the readers’ awareness of this significant adverse event to facilitate clinical suspicion and early recognition in potential future cases.

Cyclophosphamide is an alkylating agent with cytotoxic and immunosuppressive properties. It is frequently used to treat a variety of inflammatory and malignant conditions, either as a sole agent or in combination with chemotherapeutic drugs or glucocorticoids. Toxicities associated with cyclophosphamide are well-described. Significant adverse effects include dose-related leukopenia, hemorrhagic cystitis, infertility, secondary malignancies and pulmonary toxicity[1]. Reported gastrointestinal side effects include dose-related nausea, stomatitis and a single case of hemorrhagic colitis. In this report, we describe the case of a male patient with fatal small bowel enteritis and pan-colitis which was associated with four weeks of cyclophosphamide therapy.

A 60-year-old male was diagnosed with histologically confirmed glomerulonephritis secondary to anti-neutrophil cytoplasmic antibody -positive microscopic polyangiitis, following investigations for elevated creatinine on routine blood test. He was treated in hospital with intravenous methylprednisolone (500 mg daily) and oral cyclophosphamide (100 mg daily) for three days. He was discharged home on a weaning course of prednisolone and cyclophosphamide, with normalisation of his renal function.

Two weeks following this admission, the patient was admitted to a regional hospital with a two day history of nausea, vomiting and diarrhea with intolerance of oral intake. His wife had had similar symptoms recently. The patient developed large volume watery diarrhea, up to eight liters per day. He required transfer to a tertiary hospital intensive care unit where he received hemofiltration for hypovolemic acute kidney injury. Cyclophosphamide was initially reduced to 50 mg daily and then ceased in setting of potential infectious pathology. The patient had received approximately one month of cyclophosphamide, up to 2.1 g of total dose. Empiric antimicrobial therapy was commenced including tazobactam and piperacillin, intravenous metronidazole and ganciclovir. His stool specimen showed secretory diarrhoea with no infective agents identified. Vasoactive intestinal polypeptide and chromogranin levels were also non-diagnostic.

Serial computed tomographs of his abdomen revealed diffuse mural thickening of the small and large bowel. Upper and lower endoscopic evaluations demonstrated denuded and erythematous mucosa in the duodenum, as well as from sigmoid colon to terminal ileum with no significant interval change in macroscopic appearance (Figure 1). The rectum was relatively spared. Histopathology showed full thickness mucosal ulceration and inflammation throughout the terminal ileum and large bowel (Figure 2). There were no features of inflammatory bowel disease, vasculitis or viral inclusions. 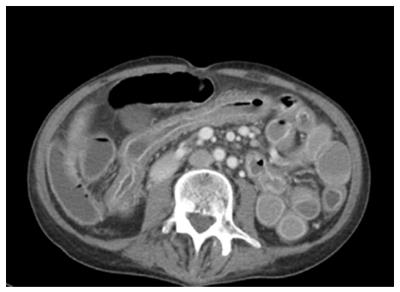 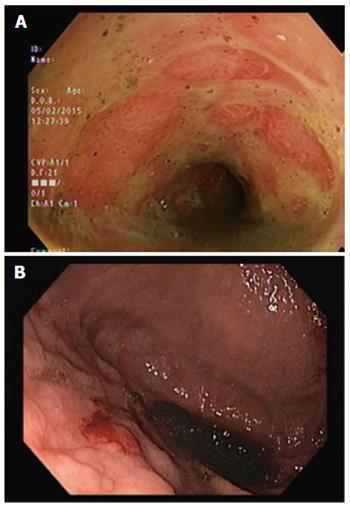 Post-mortem examination showed multiple areas of hemorrhagic ulceration in the small bowel. Histology of the ulcerated areas in small bowel showed minimal residual mucosa. Similar changes, but less severe were seen in sections of ascending and transverse colon. A small amount of retained mucosa was seen in the descending colon with relative sparing of the rectum (Figure 3). No evidence of vasculitis or thromboemboli was seen in multiple sections of the bowel wall and mesentery. No definite infectious etiology was identified in histological sections (no bacteria or fungal organisms seen on PAS or Gram stains, immunohistochemistry for cytomegalovirus, herpes simplex virus-1 and -2 were negative). Viral PCR from the small and large bowel tissue detected herpes simplex virus-1 DNA, but the clinical significance of this was uncertain in the absence of consistent immunohistochemistry and previously negative PCR. 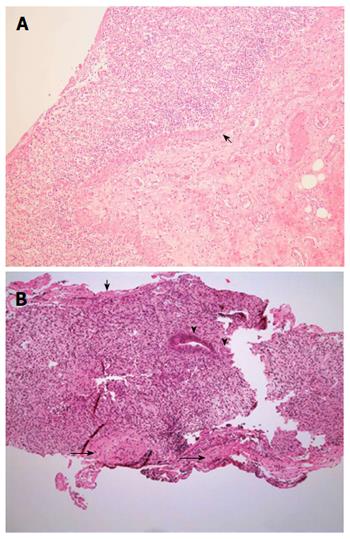 This case was a diagnostic and therapeutic challenge due to the unusual presentation and scarcity of similar case reports in literature. We considered the diagnosis of a severe neutropenic typhilitis secondary to cyclophosphamide. Cyclophosphamide has been associated with neutropenic enterocolitis, which usually occurs within two weeks of chemotherapy[6]. However, it is associated with profound neutropenia on presentation and course of disease. Our patient did not demonstrate significant neutropenia even at nadir. Treatment for an auto-immune or vasculitic cause of enteritis with IV steroid and infliximab was unsuccessful. Tissue PCR and cultures for infective causes were negative ante-mortem but prolonged immunosuppression is associated with high risks of secondary infection. Whether this contributed to failure of mucosal regeneration in this case is unclear.

The pathophysiology of cyclophosphamide-associated enteritis is difficult to ascertain in this case. If the hemorrhagic enterocolitis was related to the cyclophosphamide, one postulated etiology would be extensive mucosal necrosis with such profound loss of the stem cell niches at the base of the crypts that no repopulation of the mucosal epithelium was possible. This does not seem likely as there was evidence of mucosal regeneration on repeat biopsies and at postmortem This would be the first case of this scenario occurring with cyclophosphamide, which is used widely for treatment of inflammatory bowel disease including patients with extensive ulceration and for patients with vasculitis of the gastrointestinal tract. It is not clear why this patient would have suffered such a severe insult with a total dose of only 2 grams. His course was complicated by acute hypovolaemic renal failure, metabolic acidosis and sepsis with Enterobacter and Candida septicemia.

Chemotherapy-related diarrhea is common and is often attributed to alimentary mucositis, which has a complex pathophysiology including alterations in the intestinal microbiome. Abrupt changes in the microbiome may result in excessive generation of reactive oxygen species in the epithelium, thereby upregulating pro-inflammatory cytokines[7]. Changes in the microbial flora in this patient may have contributed to the ongoing enterocolitis even after cyclophosphamide was ceased.

The mechanisms of hemorrhagic cystitis due to cyclophosphamide have been shown to be specific to the bladder and attributed to urotoxicity of acrolein, a metabolite of the drug, and causing damage via multiple factors including tumor necrosis factor-alfa, interleukin-1-beta, cyclooxygenase-2, reactive oxygen and nitric oxide species, and PARP activation. This complication was not seen in our patient

Large volume fluid and electrolyte replacement and parenteral nutrition is required but volumes above three to four litres a day can only be sustained in inpatients, and intestinal transplantation may need consideration. Intestinal transplant was contraindicated in this case due to sepsis and malnutrition. Lastly, empiric treatment of viral and fungal infections seen in immunocompromised patients may be considered.

In conclusion, with this case report, we aim to highlight a potentially fatal and irreversible enteropathy associated with cyclophosphamide. The etiology, risk factors and treatment of this condition are not yet understood. However, early suspicion of this adverse event may facilitate timely cessation of the offending drug and provision of early supportive care and prophylactic antimicrobial therapy to prevent significant morbidity or mortality.

A 60-year-old man with glomerulonephritis presented with a 2-d history of severe watery diarrhoea and worsening renal function, 1 mo after oral cyclophosphamide therapy.

Computed tomography of the abdomen showed diffuse mural thickening of the small and large bowel.

Upper and lower endoscopy demonstrated denuded and erythematous mucosa in the duodenum, as well as from sigmoid colon to terminal ileum. Endoscopic biopsy of the small bowel and colon showed full thickness ulceration and granulation tissue with a few residual glands. There were no viral inclusions or granulomas.

There is a single case report of hemorrhagic colitis following cyclophosphamide treatment of polymyositis. The findings of this case report were similar to our case, but confined to the colon. In that report, endoscopic and histologic examination revealed nonspecific colitis with ulcerations, which resolved after cessation of cyclophosphamide and hydrocortisone rectal enemas.

Cyclophosphamide is an alkylating cytotoxic agent used in a variety of clinical settings as chemotherapeutic agent or immunosuppressant. Its main adverse effects include marrow suppression, infertility, hemorrhagic cystitis and malignancies. Gastrointestinal side effects rare and often non-specific and non-fatal.

This is a rare complication in association with cyclophosphamide therapy. Due to the unusual presentation and scarcity of similar case reports in literature, this case can be a diagnostic and therapeutic challenge. Early suspicion and recognition of this adverse event may help prevent significant morbidity or mortality in potential future cases.

The report is well written. In case of any suspected case of colitis after administering cyclophosphamide, timely cessation of the offending drug should be advised to facilitate early, aggressive supportive care for the affected patient. Moreover, prophylactic antimicrobial therapy should be considered to prevent significant morbidity or mortality. This important message is to be disseminated to protect future adverse events during cyclophosphamide treatment.