Esophageal cancer is an aggressive malignancy associated with dismal treatment outcomes. Presence of two distinct histopathological types distinguishes it from other gastrointestinal tract malignancies. Surgery is the cornerstone of treatment in locally advanced esophageal cancer (T2 or greater or node positive); however, a high rate of disease recurrence (systemic and loco-regional) and poor survival justifies a continued search for optimal therapy. Various combinations of multimodality treatment (preoperative/perioperative, or postoperative; radiotherapy, chemotherapy, or chemoradiotherapy) are being explored to lower disease recurrence and improve survival. Preoperative therapy followed by surgery is presently considered the standard of care in resectable locally advanced esophageal cancer as postoperative treatment may not be feasible for all the patients due to the morbidity of esophagectomy and prolonged recovery time limiting the tolerance of patient. There are wide variations in the preoperative therapy practiced across the centres depending upon the institutional practices, availability of facilities and personal experiences. There is paucity of literature to standardize the preoperative therapy. Broadly, chemoradiotherapy is the preferred neo-adjuvant modality in western countries whereas chemotherapy alone is considered optimal in the far East. The present review highlights the significant studies to assist in opting for the best evidence based preoperative therapy (radiotherapy, chemotherapy or chemoradiotherapy) for locally advanced esophageal cancer.

Core tip: The literature suggests that preoperative chemoradiotherapy followed by surgery results in optimal outcome while managing locally advanced esophageal cancer; however, there is a need to compare preoperative chemoradiotherapy with chemotherapy alone to further refine the role of preoperative therapy. The standard of care continues to be debated due to difference of opinions and practices across the world and lack of any trial with head-to-head comparison between these two established treatment protocols.

The eighth most common cancer in the world is esophageal cancer. Esophageal cancer, being the sixth most common cause of death from cancer, has an overall ratio of mortality to incidence of 0.88[1]. Esophageal cancer comprises of two distinct histological entities, i.e. squamous cell carcinoma (SCC) and adenocarcinoma. These two histological types differ in their epidemiology, etiopathogenesis, tumor biology, management and outcomes. SCC is common in Asia and Eastern Europe while adenocarcinoma is prevalent in North America and Western Europe. Unfortunately, majority of the patients present with locally advanced disease in esophageal cancer and survival is dismal regardless of histology.

Traditionally, surgical resection has been the mainstay of treatment with a potential to ensure loco-regional control as well as long-term survival. However, surgery alone fails to contend against the natural history of disease owing to the presence of occult micrometastasis and fatal distant and loco-regional disease relapse is common. Median survival after esophagectomy is 15 to 18 mo with a 5-year survival rate of 20% to 25%[2]. Therefore, clinicians now are inclined towards use of some form of multidisciplinary treatment including surgery as standard of care for locally advanced esophageal cancer. Locally advanced esophageal cancer can be defined as those restricted to the esophagus or resectable periesophageal tissue (T2-T4) and/or lymphnode involvement (N1-N3) in the absence of distant metastasis[3]. The optimal multimodality treatment is still controversial. Potential contentious issues exist regarding the (1) ideal approach-preoperative, perioperative, or postoperative and (2) ideal combination-radiotherapy, chemotherapy or concurrent chemoradiation. Though various randomized and non-randomized trials have been conducted to address these issues, no standard guidelines have been established till date. This review will highlight the significant studies to assist in opting for the best evidence based multimodality management of esophageal cancer. We limit this review to preoperative therapy followed by surgery as it is presently considered the standard of care. The objectives of preoperative treatment are to downstage the tumor to achieve R0 resection, reduce local and distant disease relapses and thus improve survival.

High rate of local failure after curative resection led to conception of many studies in the ’80s and ’90s to evaluate the role of preoperative radiotherapy (RT) in esophageal cancer. Preoperative RT was envisaged to increase the resectability rates with negative circumferential margins, to lower the loco-regional recurrences and to improve survival. Five randomized control trials (RCTs) addressed this issue and compared preoperative RT followed by surgery to surgery alone. Table 1 displays the salient features of these RCTs[4-8]. None of the studies reported significantly higher complete resections following preoperative RT. Only two studies reported loco-regional recurrences in the study arms: Wang et al[7] reported no difference whereas Gignoux et al[8] observed significantly lower loco-regional recurrences following preoperative RT and surgery compared to surgery alone (46% vs 67%). None of the RCTs reported significant improvement in survival. Nygaard et al[6] reported improvement in 3-year overall survival (OS) (21% vs 9%) among patients who underwent surgery following preoperative RT compared to patients who were operated upfront. Oesophageal Cancer Collaborative Group conducted a quantitative meta-analysis using updated data from these five RCTs comprising 1147 patients to assess whether preoperative radiotherapy improves OS and whether it is differentially effective in patients defined by age, sex and tumour location[9] (Figure 1). In a group of patients with mostly squamous cell carcinoma, who had a median follow up of 9 years, the hazard ratio (HR) was found to be 0.89 (95%CI: 0.78-1.01). This suggested an overall reduction in the risk of death by 11% and an absolute survival benefit of 3% at 2 years and 4% at 5 years. It, however, failed to achieve conventional statistical significance (P = 0.062). There was no apparent difference in the magnitude of the benefit by sex, age or tumor location. The authors concluded that there is not enough evidence to suggest that preoperative radiotherapy improves the survival of patients with potentially resectable esophageal cancer. The effect of such preoperative radiotherapy regimens is likely to be modest, even if they do improve survival. The absolute improvement in survival is not expected to be more than 3% to 4%. To detect such an improvement (from 15% to 20%) reliably, trials or a meta-analysis of not less than 2000 patients (90% power, 5% significance level) would be needed[10].

It can be inferred, based on available RCTs, that preoperative radiation therapy is unlikely to benefit esophageal cancer patients, both in terms of significantly lowering local failure rate and improving survival.

The enthusiasm to use preoperative chemotherapy arose due to its potential to exterminate micro-metastasis, to down-stage the tumor, thus enhancing resectability, to improve loco-regional control and to provide relief of dysphagia. The downside of giving preoperative chemotherapy is development of chemo-resistance and progression of disease in patients who do not respond to it. It is known that almost half of the patients are unresponsive to the presently employed chemotherapy[2]. Moreover, delay in local treatment can further compromise the already marginal nutritional status of the patient when surgery is not the initial treatment.

High risk of both loco-regional and systemic failures following curative treatment, led to integration of all three treatment modalities namely surgery, chemotherapy and radiation in the management of esophageal cancer. As preoperative RT failed to meet the high expectations of providing additional loco-regional control compared to surgery alone in esophageal cancer, attempts were made to use chemo-radiotherapy (CRT) as a double-edged sword. While RT was expected to improve loco-regional control, simultaneously, chemotherapy was thought to eradicate the micrometastasis. Chemotherapy adds several benefits with its use along with preoperative RT by (1) containing micrometastasis and lowering systemic failure; (2) providing additive effect to radiation by acting against the different tumor cell populations; and (3) providing assistance to radiotherapy for control of loco-regional disease (spatial cooperation)[29]. Spatial cooperation may exist at different levels: (1) with altered DNA repair or modification of the lesions induced by chemotherapy or radiation at the molecular level; (2) through cytokinetic cooperation arising from differential sensitivity of the various compartments of the cell cycle to the drug or radiation at the cellular level, notably; and (3) including re-oxygenation, increased drug uptake or inhibition of repopulation or angiogenesis at the tissue level[30].

In sharp contrast to the findings of the CROSS trial, the French trial (FFCD 9901) could not find any significant benefit of preoperative CRT. FFCD 9901 was a multicentre RCT which was conducted to assess improvement in outcomes for patients with stage I or II esophageal cancer with use of preoperative CRT. The investigators randomized 195 patients (in 30 centres) to either preoperative CRT followed by surgery (n = 98) or surgery alone (n = 97). CRT protocol was 45 Gy in 25 fractions over 5 wk with two courses of concomitant chemotherapy composed of fluorouracil 800 mg/m2 and cisplatin 75 mg/m2. Preoperative CRT did not improve R0 resection rates (93.8% vs 92.1%, P = 0.749); there was no difference in 3-year OS either (47.5% vs 53.0%, HR = 0.99, 95%CI: 0.69-1.40, P = 0.94). Moreover, significantly higher postoperative mortality was seen in patients who received preoperative CRT (11.1% vs 3.4%, P = 0.049). The authors concluded that preoperative CRT does not improve R0 resection rate or survival but enhances postoperative mortality in patients with stage I or II esophageal cancer[39]. A number of factors can be attributed to these differences in survival outcomes between the French and Dutch studies: (1) small sample size in the FFCD 9901 trial reducing the statistical power of detecting a survival benefit; (2) different histological profiles in two studies (70% of patients in the French study were SCC compared with 23% in the Dutch study); and (3) larger number of patients with early-stage disease (fewer node-positive and T3 patients) in the French study compared to Dutch study[42]. The CROSS trial investigators cautioned against coming to the conclusion that preoperative CRT is not beneficial in early-stage esophageal cancer, as one might, from the results of the FFCD 9901 trial. They highlighted that CROSS trial findings should still be considered for stage II cancers in view of its larger study population, more consistent inclusion rate, less toxic CRT regimen, more sophisticated radiation techniques and lower postoperative mortality rate[43].

A meta-analysis which was designed to compare the role of preoperative CRT for esophageal carcinoma including 14 RCTs (n = 1737) concluded that it has the potential to improve the long-term survival and reduce locoregional cancer recurrence compared to surgery alone. Five-year survival was significantly better in preoperative CRT group compared to the surgery alone group (OR = 1.64, 95%CI: 1.28-2.12). The authors further reported that a complete pathological response to CRT was observed in 10%-45.5% of patients[44].

In a meta-analysis of 12 trials which compared preoperative CRT followed by surgery versus surgery alone (n = 1854), the Australasian gastro-intestinal trials group reported that preoperative CRT led to significant reduction in all-cause mortality (HR = 0.78, 95%CI: 0.70-0.88, P < 0.0001). The beneficial effect was evident in both histological subtypes - the HR for squamous-cell carcinoma was 0.80 (95%CI: 0.68-0.93, P = 0.004) and for adenocarcinoma was 0.75 (95%CI: 0.59-0.95, P = 0.02). They further undertook the pooled analysis of two RCTs and highlighted that the preoperative CRT seemed to lower all-cause mortality compared to preoperative chemotherapy (HR for the overall indirect comparison 0.88, 95%CI: 0.76-1.01, P = 0.07). They concluded that there seemed to be strong evidence for survival benefit with the use of preoperative CRT or chemotherapy followed by surgery versus surgery alone in resectable esophageal cancer[28]. 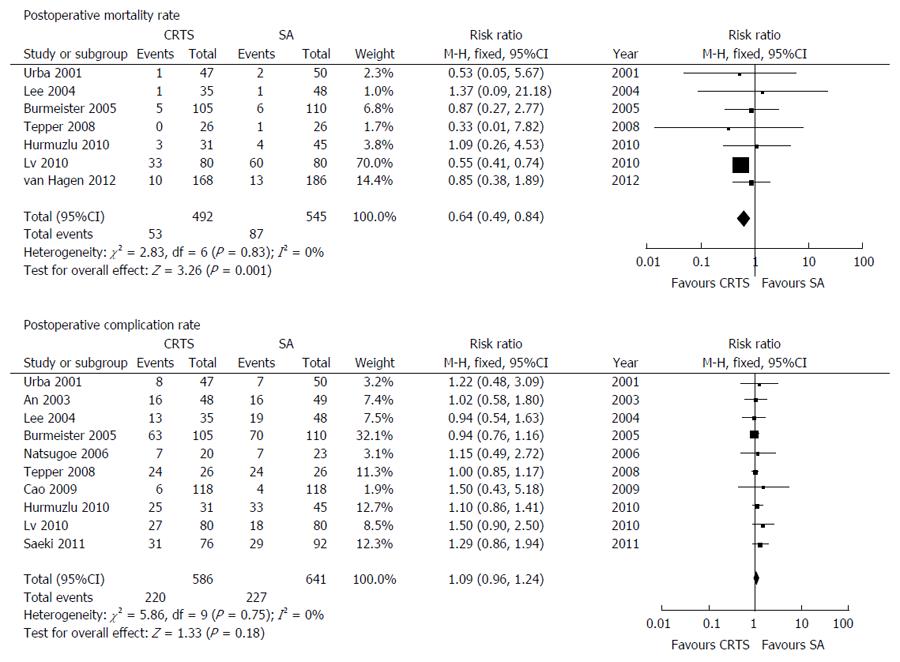 The literature suggests that preoperative chemoradiotherapy followed by surgery results in optimal outcome while managing locally advanced esophageal cancer; however, there is a need to compare preoperative chemoradiotherapy with chemotherapy alone to further refine the role of preoperative therapy. The standard of care continues to be debated due to difference of opinions and practices across the world and lack of any trial with head-to-head comparison between these two established treatment protocols.