Abdominal cocoon syndrome (ACS) is a rare cause of intestinal obstruction due to total or partial encapsulation of the small intestine by a fibrocollagenous membrane. Idiopathic ACS with abdominal cryptorchidism and greater omentum hypoplasia is even rarer clinically. We successfully treated a 26-year-old male case of small bowel obstruction with acute peritonitis. He was finally diagnosed with idiopathic ACS with unilateral abdominal cryptorchidism and greater omentum hypoplasia during exploratory laparotomy. He then underwent enterolysis, cryptorchidectomy, and appendectomy. He recovered gradually from the operations and early postoperative inflammatory ileus. There has been no recurrence of intestinal obstruction since the operation, and he is still in follow-up. We analyzed his clinical data and retrospectively reviewed the literature, and our findings may be helpful for the clinical diagnosis and treatment on ACS.

Core tip: Abdominal cocoon syndrome (ACS) is a rare abdominal disease where a portion or all of the abdominal organs are wrapped in a dense membrane-like fibrous tissue. Intestinal obstruction is the main clinical manifestation of ACS. Because of its rarity and lack of characteristic symptoms, ACS is fairly difficult to diagnose pre-operatively. Surgeons should be aware of this disease when confronted with a case of intestinal obstruction whose abdominal radiography shows intestinal loop aggregation cluster. Accompanying cryptorchidism is possible, and a careful physical examination and operative exploration for the undescended testicle should be performed. Postoperative care and dietary guidance are very important to the rehabilitation of ACS patients. Postoperative re-adhesion and early postoperative inflammatory ileus easily occur after extensive enterolysis.

Abdominal cocoon syndrome (ACS) is a rare abdominal disease where a portion or all of the abdominal organs are wrapped in dense membrane-like fibrous tissue. It was first reported in 1978 and is also known as idiopathic sclerosing peritonitis, primary sclerosing peritonitis, and sclerosing encapsulating peritonitis[1,2]. The etiology and epidemiological characteristics of idiopathic ACS remain unknown. Intestinal obstruction is the main clinical manifestation of ACS. Usually, ACS is chanced upon during abdominal surgery. Because of its rarity and lack of characteristic symptoms, ACS is fairly difficult to diagnose prior to the operation.

A 26-year-old male patient was admitted to the emergency department with complaints of abdominal pain, nausea, and vomiting for about 10 h on November 25, 2014. Although this patient had a history of overeating before hospitalization, he did not have a history of chronic systemic disease or abdominal trauma. Upon physical examination, there was asymmetrical distension and general tenderness with heightened intestinal sounds, especially prominent in the right middle abdomen. The right testicle was not palpable in the scrotum. The laboratory examinations showed normal peripheral leukocyte counts (7.98 × 109/L), but the ratio of neutrophils was slightly elevated to 75.1%. Abdominal radiography detected the dilated intestine with air-fluid levels in the right middle abdomen (Figure 1). Abdominal computed tomography detected dilated small intestinal loops containing air-fluid levels clustered in the middle abdomen that were surrounded by a thick and sac-like membrane (Figure 2). The widespread adhesions between the peritoneum and small intestine were found during exploratory laparotomy. With further exploration, a cocoon-like fibrous structure was identified in the middle abdomen that surrounded the majority of small intestine (Figure 3). The right undescended testicle had softened and adhered tightly to the fibrous membrane near the appendix. The greater omentum was hypoplastic. When the cocoon-like fibrous membrane was opened, the small intestinal segments were dilated due to obstruction, but they were otherwise normal in structure. The obstruction was caused by fibrous bands of irregular thickness inside the cocoon-like fibrous membrane. The operation was completed after total excision of the fibrous membrane and removal of the adhesions. The released small intestinal segments were rearranged and coated with sodium hyaluronate. At the same time, the right undescended testicle and appendix were resected. Postoperative pathologic examination showed that the testis with interstitial fibrosis had no spermatogonium, primary spermatocyte, secondary spermatocyte, spermatid, or spermatozoon present in the seminiferous tubules (Figure 4). 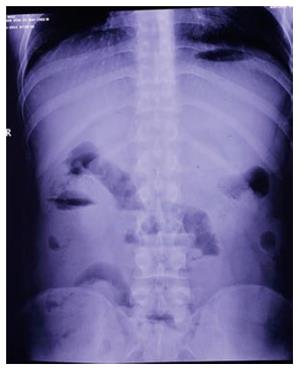 Figure 1 Abdominal radiography. The dilated intestine with air-fluid levels was prominent in the right middle abdomen. 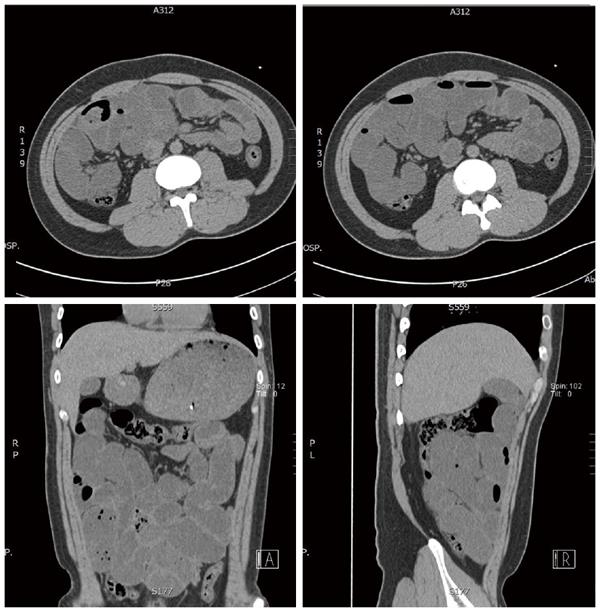 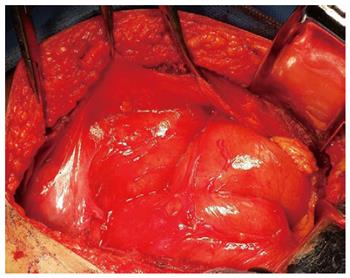 Figure 3 Intraoperative findings. Dilated small intestine was surrounded by a capsular structure in the right middle abdomen, which had a regular surface composed of natural fibrous membranes. 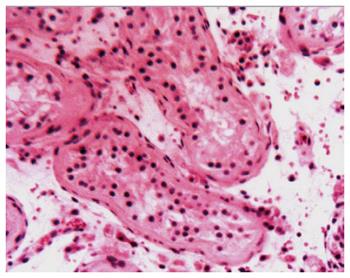 Patient recovery during postoperative week one went well, but he suffered early postoperative inflammatory ileus (EPII) performance with intermittent abdominal pain and vomiting on postoperative day 12. After a series of symptomatic treatments for about 5 d, including fasting, gastrointestinal decompression, inhibiting secretion of digestive juices by octreotide, nutritional support, and maintaining balance of electrolytes; he recovered gradually and was discharged on December 20 2014. The intestinal obstruction has not recurred, and he is still undergoing follow-up.

According to whether its etiology is explicit or not, ACS can be divided into two subtypes: primary (idiopathic) and secondary[3]. Usually, secondary ACS results in chronic asymptomatic peritonitis, such as endometriosis, retrograde menstruation, peritoneal dialysis, and abdominal tuberculosis[4]. Although idiopathic ACS is rare clinically, patients with idiopathic ACS are often accompanied by the absence of the greater omentum and cryptorchidism, suggesting that genetic factors may play a role in the etiology of idiopathic ACS. Our case developed intestinal obstruction and peritonitis without any other known risk factors; but the typical fibrous membrane surrounding the small intestine with greater omentum hypoplasia and undescended testicle confirmed that the diagnosis of idiopathic ACS is correct.

Although ACS is a rare cause of intestinal obstruction, we should vigilantly remember this disease when faced with a case of intestinal obstruction whose abdominal radiography shows intestinal loop aggregation into a cluster[5,6]. When ACS is suspected, accompanying cryptorchidism should be suspected, and a careful physical examination and operative exploration for the undescended testicle should be performed. How to deal with the undescended testicle remains controversial[7,8]. Because surgical options of the undescended testicle interfere with patient fertility and have a high risk of seminoma, it is necessary to fully communicate with the patient about this matter before the operation is performed. As for the appendix, we think appendectomy may be a good option for patients with ACS, because the occurrence of postoperative abdominal adhesions is inevitable, and it will be very difficult to perform appendectomy in these postoperative patients if appendicitis or other appendical diseases occurs[9]. The surgeon should pay attention to reserve the vital intestine and possibly the ileocecal valve and to avoid resecting the “cocoon”, as tumor results in short bowel syndrome.

As to the patients with ACS, postoperative care and dietary guidance are very important to their rehabilitation. Postoperative re-adhesion and EPII occur easily after the extensive dissection of the enterolysis[10]. Therefore, we should encourage patients to get out of bed early in order to promote intestinal peristalsis recovery and to avoid recurrence of intestinal obstruction. The patients’ diet should be gradually restored since their gastrointestinal function recovery is manifested as exhaust and defecation. The whole process of diet restoring maybe take about 10 d to 2 wk, beginning from liquid diet and progressing to semi-liquid diet, soft diet, and finally to general diet. Our case’s discharge time was delayed for about 7 d by EPII because of improper self-eating.

Patient was admitted to the emergency department with complaints of abdominal pain, nausea, and vomiting for about 10 h.

Upon physical examination, there was asymmetrical distension and general tenderness with heightened intestinal sounds, which were especially prominent in the right middle abdomen.

During exploratory surgery, a cocoon-like fibrous structure surrounding the majority of the small intestine was identified in the middle abdomen.

The patient underwent a series of operations, firstly exploratory laparotomy, and then enterolysis, cryptorchidectomy, and appendectomy.

Abdominal cocoon syndrome (ACS) is a rare cause of intestinal obstruction due to total or partial encapsulation of the small intestine by a fibrocollagenous membrane.

When encountering a suspected case of ACS, the surgeon must be aware of the possibility of accompanying cryptorchidism. Then, a careful physical examination and operative exploration for the undescended testicle should be performed. Postoperative care and dietary guidance are very important to their rehabilitation.

This manuscript is a very interesting case report of a rare disease, ACS. Here, the patient presented with a small bowel obstruction with acute peritonitis. ACS is a rare disease where a portion of or all of the abdominal organs are wrapped in dense membrane-like fibrous tissue.