AIM: To investigate the impact of different surgical techniques on post-operative complications after colorectal resection for endometriosis.

CONCLUSION: Although further randomized clinical trials are needed to give a definitive conclusion, laparoscopic colorectal resection for deep infiltrating endometriosis appears to be both feasible and safe. Surgical technique cannot be considered a risk factor of post-operative complications.

Core tip: To the best of our knowledge, this is the first study evaluating the impact of different surgical techniques on the occurrence of post-operative complications. We have evaluated the potential influence of the most relevant surgical differences, including: laparoscopic approach, single access laparoscopy, flexure mobilization, mesenteric artery ligation, specimen extraction site, and diverting ileostomy creation.

Endometriosis is a common condition that affects up to 10% of women in their reproductive years[1]. Deep infiltrating endometriosis (DIE) is characterized by endometriosis implants that penetrate more than 5 mm into the affected tissue. Although the disease is limited in most patients to the genital organs, endometriosis may diffusely involve pelvic structures such as the bowels and urinary tract[2-5]. The estimated incidence of bowel endometriosis is between 3% and 36%[6], while rectal and rectosigmoid junction involvement together account for 70%-93% of all intestinal endometriotic lesions[7].

Due to the limited efficacy of medical therapy and symptom recurrence rates as high as 76%[8], surgical excision is frequently advocated as the treatment of choice[9,10].

Although it is well known that laparoscopic segmental colorectal resection is preferred for the treatment of colorectal endometriosis, little is known about the impact of different surgical techniques on post-operative complications.

Utilizing prospectively maintained endometriosis databases, all consecutive women who underwent colorectal resection for endometriosis from January 2005 to December 2013 were identified for inclusion in a multicenter study after obtaining local ethics committee approval and signed informed consent. A case-controlled study was designed, including 22 women with and 68 women without post-operative complications, to identify potential risk factors for complications after surgery, with a focus on surgical technique.

Only institutions with a high volume of colorectal surgeries were included, and only prospectively recorded data were analyzed. All consecutive procedures were included in our analyses, according to strict inclusion criteria; all patients operated on by expert surgeons with standardized indications for surgery were included in our analyses. The laparoscopic colectomy learning curve can be considered completed after between 30 and 70 procedures. Thus, only procedures performed by an expert surgeon (i.e., with experience of more than 70 laparoscopic colectomies) were included in the study[11]; furthermore, all procedures were performed by a multidisciplinary surgical team, including an expert colorectal surgeon and a gynecologist. Indications for colorectal resection included the presence of colorectal involvement in deep bowel endometriosis diagnosed by laparoscopy[12] and of endometriosis-related symptoms (i.e., pelvic pain, dyschezia, rectal bleeding, obstruction, and dyspareunia).

Different surgical approaches were performed according to the clinical advice of each individual surgeon. A propensity score analysis was performed to exclude any bias related to the allocation of each patient into the different surgical technique groups.

Dissection is performed through the rectovaginal septum, where endometriosis implants are frequently found and must be removed. The rectum is mobilized at least 2 cm below the nodule of the endometriosis. A stapler is introduced into the peritoneal cavity, and then the rectum is sectioned. After extracting the rectal stump, the rectum or rectosigmoid (depending on the disease extension) is resected. Then, the head of the EEA (end-to-end) stapler (usually 29 mm) is positioned, the pneumoperitoneum is reconstituted, and a transanal end-to-end colorectal anastomosis is performed according to the Knight-Griffen technique. According to the clinical advice of each surgeon, flexure mobilization, mesenteric artery ligation, diverting ileostomy, or transvaginal colon extraction may be performed.

To minimize the bias related to the use of differing post-surgical managements, the post-operative period was homogenized to exclude patients who received different medical and nursing care. Specifically, on post-operative day 1, endovenous hydration was suspended, and the patients were allowed to drink liquids and consume oral medicines. Criteria for discharge included symptom absence, tolerance of a minimum of three meals without restrictions, and stool passage.

Short-term follow-up was conducted at 5 and 30 d after discharge. All adverse events that occurred within 90 d after surgery were considered to be complications.

The term anastomotic leakage defines all conditions with clinical or radiologic anastomotic dehiscence, with or without the need for surgical revision. Any bleeding led to an evaluation to determine if a blood transfusion was required. Bowel dysfunction was considered if any problems with the frequency, consistency, and/or ability to control bowel movements occurred after surgery.

Statistical analysis was performed with SPSS 16 (SPSS Inc., Chicago, IL, United States). Continuous data are expressed as the mean ± SD, with categorical variables expressed as a percentage. To compare continuous variables, an independent sample t-test was performed. The Wilcoxon test for paired samples was employed as a non-parametric equivalent of the paired sample t-test used for continuous variables. The χ2 test was employed to analyze categorical data. When the minimum expected value was < 5, Fisher’s exact test was used. All results are presented as 2-tailed values with statistical significance if P values were < 0.05. To adjust for all the other variables and to make predictions, multivariate analyses were performed with post-operative complication occurrence (logistic regression) as dependent variables, and with major clinical and demographic characteristics, as well as surgical approach, as independent variables.

Demographics and disease-related data for each cohort are shown in Table 1. There were no significant differences in terms of age, BMI, or symptoms between the two groups. 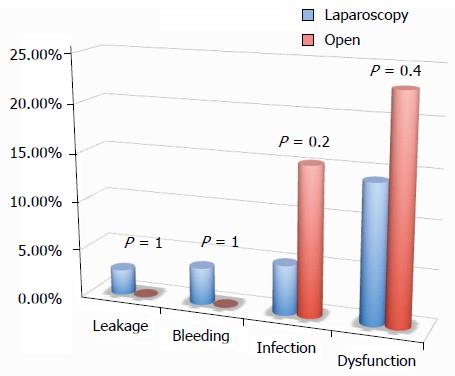 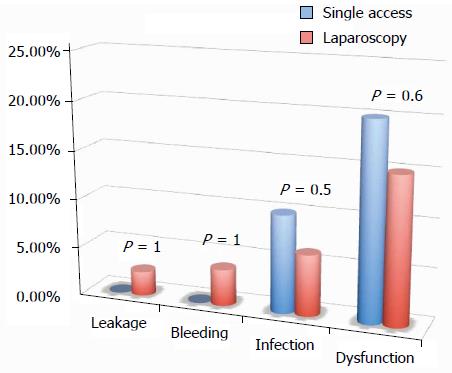 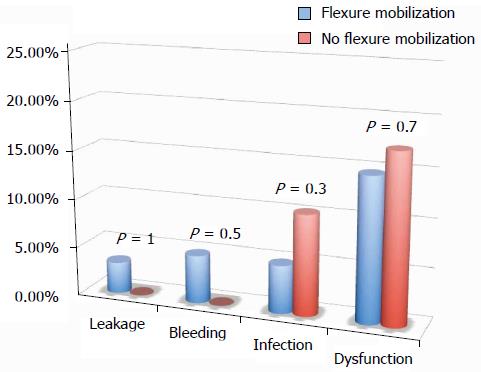 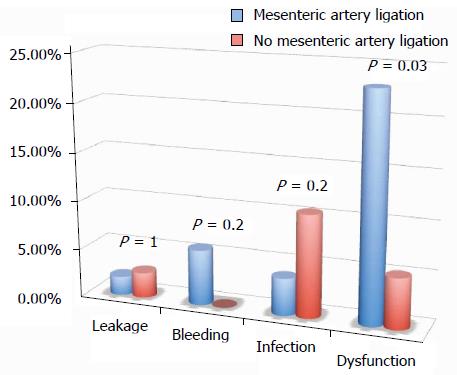 Deep endometriosis invading the bowel constitutes a major challenge for gynecologists. In addition to a greater impact on pain[13,14], the high incidence of surgical morbidity involved with the bowel[2,15,16] poses a therapeutic dilemma for the surgeon[17,18]. Intestinal involvement of deep endometriotic nodules has been estimated to occur in 8%-12% of women with endometriosis[19,20], with colorectal disease involvement representing almost 90% of these cases[4,7,21-23]. The complete excision of all endometriotic lesions is the main objective of both laparoscopic and laparotomic surgeries that require a multidisciplinary approach[24,25] and highly skilled surgeons. Laparoscopic excision of deep infiltrating bowel endometriosis has become a frequently used treatment modality, and segmental bowel resection has been performed in many cases, despite the relatively high morbidity rate.

Brouwer and Woods[33] reported that the type of surgical approach, including full-thickness excision of the rectal wall and segmental resection, does not change the rate of complications. However, many factors are affected by the surgeon’s learning curve, such as the conversion rate, operating time, complication rate, and surgical effectiveness[34]. Nevertheless, complications can occur, even among experienced surgeons[35]. Accordingly, only procedures performed by expert surgeons were included in our analysis.

To the best of our knowledge, this is the first study to evaluate the impact of different surgical techniques on the occurrence of post-operative complications. We have evaluated the potential influence of the most relevant surgical differences, including laparoscopic approach, single access laparoscopy, flexure mobilization, mesenteric artery ligation, specimen extraction site, and diverting ileostomy creation.

Interestingly, we found that the occurrence of post-operative complications was not influenced by surgical technique. Only mesenteric artery ligation was associated with a higher incidence of bowel dysfunction after surgery (P = 0.03). Thus, based on current knowledge, this study confirms that preservation of the inferior mesenteric artery should be recommended to reduce the incidence of defecatory disorders after left hemicolectomy for benign disease[38]. The sectioning of sigmoid arteries close to the colonic wall without sectioning the inferior mesenteric artery may preserve innervations of the neosigmoid and could reduce defecatory disorders.

Furthermore, the absence of a higher incidence of post-operative complications after single access laparoscopy encourages this approach’s introduction in daily practice.

Finally, in contrast with previous publications, we did not find any association between the opening of the vagina and the occurrence of post-operative complications. This could be related to cooperation between the surgeon and the gynecologist.

Some limitations of this study must be addressed. The most major limitation lies in the study design; because this study was an evaluation of a prospective maintained database, there was a lack of patient randomization. However, multivariate analyses including all patients’ characteristics were performed to adjust the results for all other variables. Furthermore, although the surgical approach was dependent on the clinical advice of each individual surgeon, a propensity score was calculated to exclude any bias. Although a relatively small sample size was obtained in this multicenter study, certain biases were excluded, as only procedures performed by expert surgeons in standardized surgical indications with standard post-operative management were included.

Thus, our results encourage the consideration of laparoscopic colorectal resection for deep infiltrating endometriosis owing to its feasibility, safety, and low occurrence of post-operative complications, if performed by experienced surgeons. Furthermore, we cannot identify any surgical technique or approach that should be avoided to reduce major complications after surgery.

This study clearly provides the rationale for a future randomized clinical trial comparing different surgical approaches in order to provide a definitive conclusion.

Although laparoscopic segmental colorectal resection is an established technique for the treatment of colorectal endometriosis, little is known about the impact of different surgical techniques on post-operative complications.

The results encourage the consideration of laparoscopic colorectal resection for deep infiltrating endometriosis owing to its feasibility, safety, and low incidence of post-operative complications, if performed by experienced surgeons. Furthermore, we cannot identify any surgical technique or approach that should be avoided to reduce major complications after surgery.

This study clearly provides the rationale for a future randomized clinical trial comparing different surgical approaches in order to provide a definitive conclusion.

This paper is well constructed, with good data and statistical analysis. Further randomized clinical trials are needed to give more a definitive conclusion.