AIM: To analyze the relationship between lymph node metastasis and clinical pathology of early gastric cancer (EGC) in order to provide criteria for a feasible endoscopic therapy.

METHODS: Clinical data of the 525 EGC patients who underwent surgical operations between January 2009 and March 2014 in the West China Hospital of Sichuan University were analyzed retrospectively. Clinical pathological features were compared between different EGC patients with or without lymph node metastasis, and investigated by univariate and multivariate analyses for possible relationships with lymph node metastasis.

CONCLUSION: We propose an endoscopic therapy for EGC that is limited to the mucosa, size ≤ 2 cm, differentiated and without lymphatic involvement.

Core tip: Early gastric cancer (EGC) is defined as invasive gastric cancer that invades no more deeply than the submucosa, irrespective of lymph node metastasis. Gastrectomy/endoscopic resection can be used for the treatment of patients meeting appropriate criteria. In this study, we retrospectively evaluated the relationship between lymph node metastasis and clinical pathological features of 525 EGC cases. Univariate and multivariate analyses were applied to confirm the risk factors for lymph node metastasis, and to establish indications for a feasible individualized endoscopic therapy for EGC.

Early gastric cancer (EGC) is defined by the Japanese Society of Gastroenterological Endoscopy as invasive gastric adenocarcinoma confined to the mucosa or submucosa, irrespective of lymph node metastasis (T1, any N)[1]. Worldwide, gastrectomy remains the most widely used approach for the treatment of EGC, and the 5-year survival rate of patients who undergo curative surgery exceeds 90%[2]. Hence, it is important to detect and treat the cancer at early stage. In recent years, with the constant development of new endoscopy technology, such as chromoendoscopy, magnifying endoscopy, endoscopic ultrasonography (EUS) and the improvement of endoscopic diagnosis, more and more EGC are detected and accurately diagnosed[3]. Approximately 50% of gastric cancer cases currently found in Japan ar eat early stage, while in China, less than 10% of EGC is diagnosed[4]. The percentage has been gradually improving recently[5]. Meanwhile, minimally invasive techniques, especially endoscopic mucosal resection (EMR) and endoscopic submucosal dissection (ESD) for EGC, have dramatically grown. Compared with traditional radical surgical procedure, endoscopic treatment has many unique features, including being equally effective, less invasive, and having fewer complications and faster postoperative recovery, which make it possibly a better option for EGC patients[6,7]. For EGC with lymph node metastasis, however, EMR and ESD are not ideal since they are unable to remove lymph nodes and thus achieve a radical cure effect. So accurate judgment of lymph node metastasis in patients with EGC is very important for the selection of appropriate therapy and prognosis of patients[8]. This study retrospectively analyzed the clinical data of 525 patients with EGC who underwent gastrectomy with lymph node dissection in our hospital over the last five years. The purpose is to evaluate the relationship between lymph node metastasis and clinical pathological features of EGC, and to propose criteria for feasible individualized endoscopic therapy.

We collected 2913 cases of patients who underwent gastrectomy with lymph node dissection at West China Hospital of Sichuan University between January 2009 and March 2014. Of these, 529 cases were pathologically proven to be EGCs. A total of 525 cases were enrolled in this study, excluding 4 cases of gastric stump carcinoma. Patient characteristics, including age and gender, were collected. In addition, information on tumor size, histological type, invasion depth, ulceration and lymphatic invasion was also retrieved from medical records.

According to the 7th edition of Tumor-Node-Metastasis stage criteria by the American Joint Committee on Cancer, we subdivided EGC into: T1a-invasion of lamina propria or muscularis mucosae; T1b-invasion of submucosa[9]. The depth of tumor invasion was classified as mucosa (T1a) and submucosa carcinoma (T1b). The maximum diameter of tumor was recorded as tumor size according to the operation records and pathologic description. Tumor histology was classified into two groups according to Japanese classification of gastric carcinoma: the differentiated group, which included papillary adenocarcinoma and well or moderately differentiated adenocarcinoma; and the undifferentiated group, which included poorly differentiated adenocarcinoma, mucinous, and signet ring cell carcinoma[10]. Associations between lymph node metastasis and clinical pathological features were assessed by univariate (Table 1) and multivariate (Table 2) analyses, and the lymph node metastasis status of T1a tumors according to gender, tumor size, histological differentiation and lymphatic involvement was analyzed (Table 3).

All the data were analyzed with SPSS 22.0 statistics software (Chicago, IL, United States). Univariate analysis was performed by χ2 test (or Fisher’s exact test when appropriate) to compare the clinicopathological factors between patients with and without lymph node metastasis. Significant factors noted by univariate analysis were subsequently entered into a multivariate logistic regression model to assess the independent risk factors for lymph node metastasis. OR and 95%CI were calculated, and statistical significance was established at P < 0.05.

According to four independent factors including gender, tumor size, lymphatic involvement and histological differentiation, we analyzed 233 cases of T1a tumor.Table 3 shows that lymph node metastasis could not be found in patients with tumor that was limited to the mucosa, size ≤ 2 cm, differentiated and without lymphatic involvement, irrespective of the gender.

After further analysis of 233 T1a carcinomas based on four independent factors including gender, tumor size, lymphatic involvement and histological differentiation, we propose an endoscopic therapy for T1a carcinoma that is limited to tumor size ≤ 2 cm, differentiated and without lymphatic involvement. In the latest edition of Japanese gastric cancer treatment guidelines, the indications for endoscopic treatment of T1a carcinoma are: tumor size ≤ 2 cm, differentiated and no ulcer[29]. Different from the guidelines, we consider “no lymphatic involvement” rather than “no ulcer” as an indication for endoscopic treatment. Consistent with the reports from Park et al[25] and Sung et al[30], our study revealed that ulceration was not an independent risk factor for lymph node metastasis in EGC. Additionally, ulceration is mainly judged by endoscopy and pathology examinations; both have certain subjective bias. If patients had previously undergone mucosa biopsy, it would be quite difficult to identify primary ulcers from biopsy injuries under the endoscope[31]. So it is difficult to judge precisely whether there are ulcers or not in clinical practice. In addition, gastritis profunda cystica has been alongside EGC and mimicked cancer[32]. 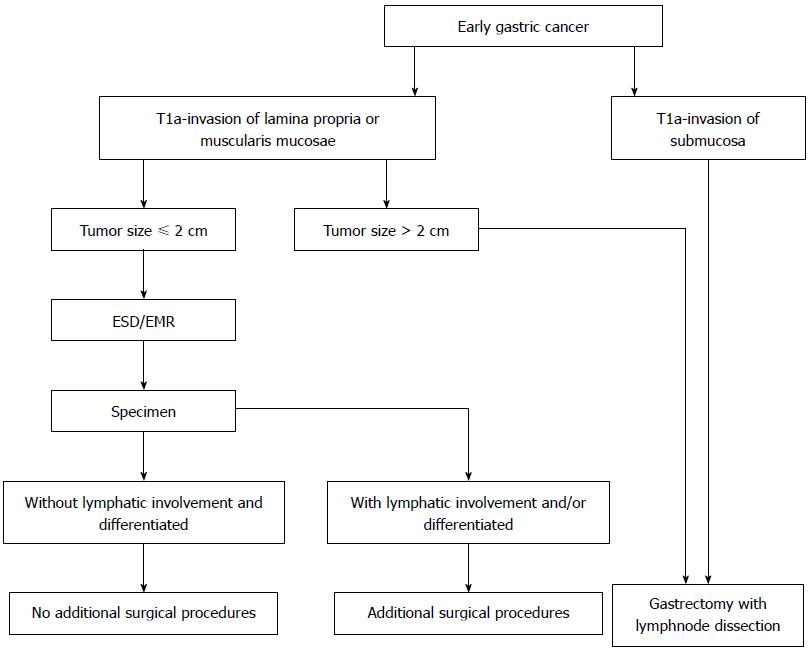 Several studies have attempted to identify risk factors predictive of lymph node metastasis in EGC. Few reports, however, have proposed criteria for endoscopic resection for EGC.

Endoscopic resection could be an alternative treatment in EGC patients without risk factors for lymph node metastasis.

Endoscopic resection (ER) is an endoscopic alternative to surgical resection of mucosal and submucosal neoplastic lesions and intramucosal cancers; EMR: An ER technique providing a minimally invasive treatment for removal of superficial malignancies; ESD: An ER technique using a specialized needle-knife to dissect lesions from the submucosa, which offers the potential to remove mucosal and submucosal tumors en bloc.

This study analyzed the relationship between lymph node metastasis and clinical pathology of 525 EGC patients who underwent surgical operations. This is a good study about endoscopic therapy for EGC.