Visceral myopathy is one of the causes of chronic intestinal pseudo-obstruction. Most cases pathologically reveal degenerative changes of myocytes or muscularis propia atrophy and fibrosis. Abnormal layering of muscularis propria is extremely rare. We report a case of a 9-mo-old Thai male baby who presented with chronic intestinal pseudo-obstruction. Histologic findings showed abnormal layering of small intestinal muscularis propria with an additional oblique layer and aberrant muscularization in serosa. The patient also had a short small bowel without malrotation, brachydactyly, and absence of the 2nd to 4th middle phalanges of both hands. The patient was treated with cisapride and combined parenteral and enteral nutritional support. He had gradual clinical improvement and gained body weight. Subsequently, the parenteral nutrition was discontinued. The previously reported cases are reviewed and discussed.

Core tip: This report describes the case of a 9-mo-old boy who presented with chronic intestinal pseudo-obstruction. Full-thickness small bowel biopsy showed abnormal layering of muscularis propria (additional oblique layer) and serosal aberrant muscularization. There have been only eight previously reported abnormal layering cases and only one case with an additional oblique layer. The patient also had a short small bowel without malrotation, brachydactyly, and absence of the 2nd to 4th middle phalanges of both hands. The patient showed clinical improvement with medical treatment and nutritional support.

Chronic intestinal pseudo-obstruction (CIPO) was first described by Dudley in 1958[1]. It is a rare, severe gastrointestinal disorder in which intestinal motility is impaired. CIPO can be congenital or acquired (primary or secondary)[2], and is characterized by recurrent signs and symptoms of intestinal obstruction in the absence of true mechanical obstruction[3]. It can affect both adults and children. Most pediatric patients manifest at birth or in early infancy[4]. The two main pathophysiologic types of this motility disorder are myopathic and neuropathic[5]. This report describes a pediatric case of CIPO due to visceral myopathy with rare histology (abnormal layering muscularis propria and serosal aberrant muscularization) along with a review of the literature.

A 9-mo-old Thai male baby presented with abdominal distention and bilious vomiting that had begun at 2 wk of age. He could be fed orally and defecate daily. He was the first child with an uneventful history of prenatal, perinatal, and neonatal periods, and his birth weight was 3065 g. No family member had similar symptoms. He had visited another hospital at the age of 3 mo, and upper gastrointestinal studies were conducted revealing no intestinal malrotation or other gastrointestinal obstruction. His abdominal distention and bilious vomiting progressed and he had poor weight gain.

Upon presentation to our hospital, a physical examination showed a body weight of 5500 g (below the 3rd percentile), length 64 cm (10th percentile), no dysmorphic features, marked abdominal distention, hyperactive bowel sounds, visible peristalsis, and bilateral indirect inguinal hernia. He also had brachydactyly on both hands. X-ray film demonstrated an absence of middle phalanges of the 2nd to 4th fingers. The other systems were unremarkable. The plain abdominal radiographs showed diffuse small bowel dilatation (Figure 1). Barium enema showed no transitional zone or signs of Hirschsprung disease, but irregular mucosa of nearly his entire colon was noted. Small bowel follow-through showed dilatation with thickening fold of almost the entire small bowel from duodenum to ileum with hyperperistalsis, and partial distal small bowel obstruction was suspected (Figure 1). A bilateral inguinal hernia was suspected as the cause of partial gastrointestinal obstruction, and bilateral herniorrhaphy was performed. Unfortunately, his symptoms did not improve. Upper endoscopy and colonoscopy were performed to exclude mucosal diseases, and were unremarkable. The histology of biopsies from esophageal, duodenal, gastric, and colonic mucosa showed no significant pathologic findings or tissue eosinophilia. His clinical symptoms were worse with progressive bilious vomiting, abdominal distension, and poor weight gain. As intestinal obstruction could not be excluded, exploratory laparotomy was performed at the age of 9 mo. Intraoperative findings showed normal size of the colon, but thickening of the short small bowel, which measured 86 cm from the duodenojejunal junction to the ileocecal valve. A pale thickened and inflamed Tenia coli-like line was noted on the antimesenteric side from his duodenojejunal junction to 15 cm above the ileocecal valve (Figure 2). Appendectomy and full-thickness biopsy of the distal ileum were performed and sent for intraoperative consultation. The specimen was fixed in formalin afterward. 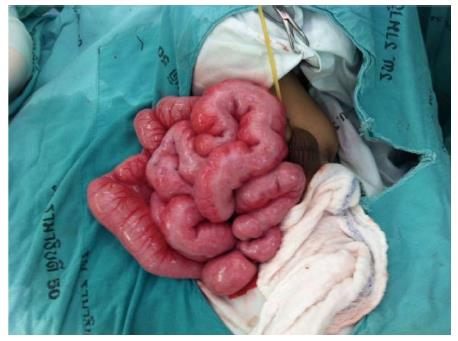 Figure 2 Exploratory laparotomy revealed thickening of the short small bowel. The bowel was pale, thickened, and an inflamed Tenia coli-like line was noted on the antimesenteric side from the duodenojejunal junction to 15 cm above the ileocecal valve.
Histopathology 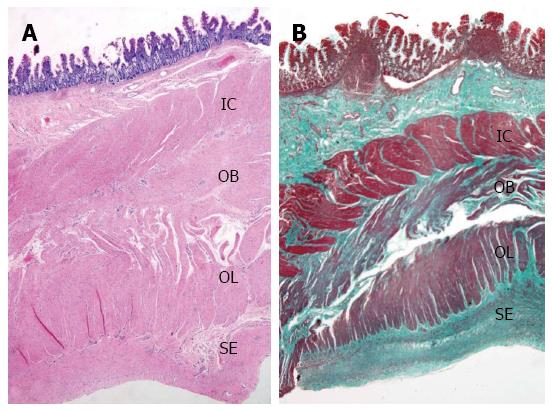 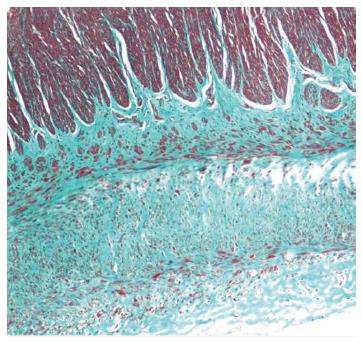 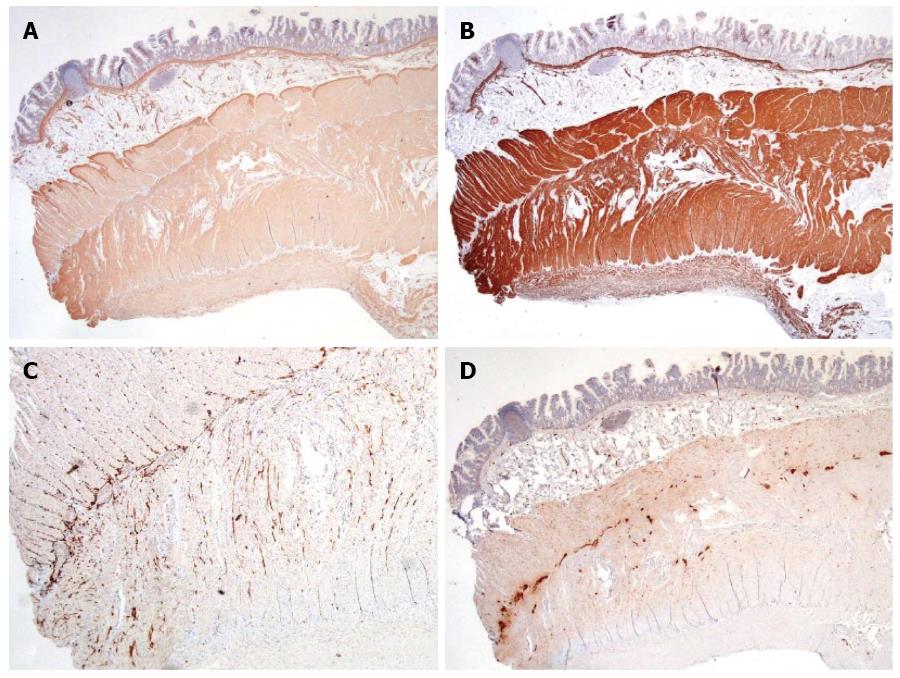 This report describes a pediatric case of primary CIPO due to visceral myopathy from abnormal layering of muscularis propria. Clinical presentations were similar to most cases of CIPO. The symptoms begin at birth in 50% of patients, and by age one year in 75%. Bilious vomiting, abdominal distension, and obstipation are almost universal presentations[6]. The majority of the pediatric cases are primary or idiopathic CIPO. Antonucci et al[7] identified secondary causes, such as organic, systemic, or metabolic causes, in only 4/77 CIPO patients. Antroduodenal manometry is useful for differentiating between the neuropathy and myopathy type[8]. Unfortunately, this investigation is not available in our institute. Definite diagnosis of CIPO requires full-thickness biopsies for histopathology.

Visceral myopathy can be divided into two groups. The first group is comprised of intrinsic myocyte defects with characteristic findings of vacuolar degeneration and fibrosis in inner circular and/or outer longitudinal muscular layers[9-12]. The other changes include nuclear atypia, increased mitotic activity, periodic acid-Schiff-positive intracytoplasmic inclusions[13], and absence or decreased smooth-muscle α-actin immunostaining in the circular muscle layer[14]. The second group comprises morphogenic abnormalities of muscularis propria. Most cases are of an atrophic pattern[8,13,15]. A few cases of a hypertrophic pattern with hypertrophy of one or both layers have been reported[8,16-18]. The abnormal layering of muscularis propria is exceedingly rare, and only eight cases have been reported (Table 1).

Most cases with abnormally layered muscularis propria are male. The clinical symptoms appear early in life and depend on the site of involvement. Patients with colonic involvement present with constipation, whereas small intestine involvement manifests as vomiting and abdominal distension. Additional circular muscle coats in various locations are the most common feature. Only one case with an additional oblique layer similar to our case was reported by Yamagiwa et al[19]. To our knowledge, serosal Tenia coli-like aberrant muscularization has never been described in the literature.

Common associated abnormalities are a short small intestine (mostly with malrotation)[4,20], urinary involvement, including megacystis and megaureter[21], and skeletal deformity (spine and extremities). To our knowledge, there has been no report of association with brachydactyly and absence of the middle phalangeal bones in visceral myopathy cases. Smith et al[9] suggested an X-linked mode of inheritance in three related boys with abnormal layered muscularis propria of small and large intestines with megacystis. DNA analysis was not performed in our case due to unavailability in our institute.

The impact of abnormal layering of muscularis propria on the natural history or prognosis remains unknown as the numbers of cases are small. Among the eight reported cases, clinical outcome could be identified in only two cases. The first case had clinical improvement of constipation and grew into a healthy young man after partial resection of a dilated sigmoid colon and rectum. However, the second case died due to multiple organ anomalies[22].

There is no specific treatment for CIPO from visceral myopathy, and nutritional support is the mainstay of management in these children. Pharmacotherapy, including cisapride, erythromycin, and octreotide, to stimulate intestinal contractions, may be useful in some select cases[23,24]. Small bowel transplantation has a potential role for those who have irreversible intestinal failure and permanent dependence on parenteral nutrition[25,26]. Prognosis is fair to poor and a requirement for long-term parenteral nutrition is common in these patients[27]. A mortality rate of 25% has been reported in a large cohort study, and common causes of death are parenteral-related complications[21]. Our patient also had a short bowel accompanying the CIPO. Management modalities of short-bowel syndrome include enteral and parenteral nutritional support, treating small bowel bacterial overgrowth, and fish-oil-based lipid emulsions[28]. Currently, teduglutide, a recombinant analog of human glucagon-like peptide-2, is an emerging treatment for those with intestinal failure[29]. Our patient was treated with cisapride and combined parenteral and enteral nutritional support. He had gradual clinical improvement and gained body weight, and parenteral nutrition was subsequently discontinued. At the time of the writing of this report, he is 3 years-old and has normal growth, with a body weight of 15 kg (65th percentile) and height of 95 cm (55th percentile).

A 9-mo-old Thai male baby presented with abdominal distention that had been present since birth and bilious vomiting since 2 wk of age.

Unremarkable findings for the laboratory tests.

There have been only eight previously reported abnormal layering cases, and only one case showed an additional oblique layer. The patient also had aberrant serosal muscularization, brachydactyly, and absence of 2nd to 4th middle phalanges in both hands, which have never been reported.

The authors report an interesting case of a very rare situation presenting with intestinal pseudo-obstruction linked to a short small bowel and brachydactyly. In the gut, it was associated with an additional oblique muscle layer and with muscularization of the serosa. Although descriptive, this study also reviews the few cases described in the literature exhibiting visceral myopathy due to abnormal layering of the muscularis propria. It shows that the current case corresponds to a situation never previously reported.