Intussusception is rarely reported in adult patients with acute leukemia. We report a case of intussusception in a 29-year-old woman with acute myeloid leukemia (AML). She developed right lower quadrant pain, fever, and vomiting on day 16 of induction chemotherapy. Physical examination showed tenderness and guarding at the right lower quadrant of the abdomen. Abdominal computed tomography (CT) showed distension of the cecum and ascending colon, which were filled with loops of small bowel, and herniation of the ileocecal valve into the cecum. We proceeded to laparotomy and revealed ileocecal intussusception with the ileocecal valve as the leading point. The terminal ileum was thickened and invaginated into the cecum, which showed gangrenous changes. Right hemicolectomy was performed and microscopic examination of the colonic tissue showed infiltration of leukemic cells. The patient recovered after the operation and was subsequently able to continue treatment for AML. This case demonstrates that the diagnosis of intussusception is difficult because the presenting symptoms can be non-specific, but abdominal CT can be informative for preoperative diagnosis. Resection of the involved bowel is recommended when malignancy is suspected or confirmed. Intussusception should be considered in any leukemia patients presenting with acute abdomen. A high index of clinical suspicion is important for early diagnosis.

Core tip: Gastrointestinal complications are common in patients with acute leukemia, but intussusception is rarely reported in adult leukemia patients. Previous reports have mainly been in children with leukemia. We report a case of intussusception in an adult after chemotherapy for acute myeloid leukemia (AML). A 29-year-old woman with AML presented with fever, vomiting and right lower quadrant pain. Abdominal computed tomography showed features of intussusception. Resection of the involved bowel was performed and the patient recovered from the operation. A high index of clinical suspicion is important for early diagnosis.

Gastrointestinal complications are common in patients with acute leukemia. They can be due to leukemic invasion of the bowel, an altered immune state, or the toxicity of chemotherapy[1]. Intussusception is the telescoping of one segment of the gastrointestinal tract into an adjacent one, and it is more common in children than in adults[2,3]. It is rarely reported in adult patients with acute leukemia and there is only one other case report of intussusception in an adult patient with AML, confirmed by bone marrow examination[4].

We report a case of intussusception in an adult with acute myeloid leukemia (AML). Although this complication is rare in adults, it should be considered as a differential diagnosis in patients with acute leukemia presenting with abdominal pain.

A 29-year-old woman was diagnosed with AML, confirmed by bone marrow examination, which showed AML with maturation (WHO classification) and poor-risk cytogenetics. She was given induction chemotherapy with daunorubicin 60 mg/m2 daily for 3 d and cytarabine 100 mg/m2 daily for 7 d. On day 16 of induction treatment, she developed right lower quadrant pain, fever, and vomiting. There was no history of prior surgery. Physical examination showed tenderness and guarding at the right lower quadrant of the abdomen, but no palpable abdominal mass. Bowel sounds were normal.

Abdominal computed tomography (CT) showed that the cecum and ascending colon appeared distended and filled with loops of small bowel (Figure 1). The ileocecal valve was herniated into the cecum. The wall of the ascending colon and cecum appeared thickened, and adjacent stranding was noted around the cecum, likely due to inflammation. The transverse colon appeared collapsed and the proximal small bowel was dilated with increased air-fluid level. Intussusception was suspected and emergency surgery was performed. 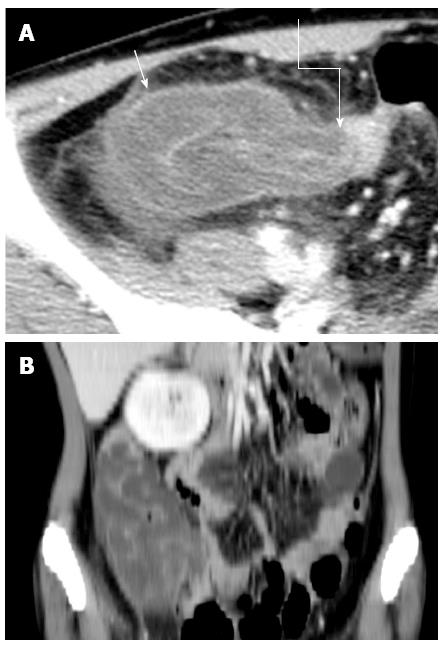 Figure 1 Contrast-enhanced computed tomography image of the lower abdomen. A: Axial image showed the terminal ileum (intussusceptum, arrow with rugged line) invaginating into the cecum (intussusceptum, arrow with straight line); B: Reformatted oblique coronal image of the iliac fossa showed thickened terminal ileum invaginating into the caecum. The wall of the cecum and ascending colon were thickened and edematous.

Laparotomy revealed ileocecal intussusception with the ileocecal valve as the leading point. The terminal ileum was thickened and invaginated into the cecum, which showed gangrenous changes. Right hemicolectomy was performed and a 5-cm long segment of ileum and a 5-cm long segment of ascending colon were examined. Macroscopic examination showed a mass 2 cm from the ileocecal junction. The mass had a whitish/brownish cut surface and was firm in consistency. The mucosal surface of the cecum and colon appeared edematous. Microscopic examination of the mass and colonic tissue showed that the submucosal and muscle layers were extensively infiltrated by leukemic cells. The cells were medium sized with irregular nuclear membranes and scanty cytoplasm (Figure 2). The cells were immunoreactive to myeloperoxidase, which is a myeloid marker.

Intussusception is the telescoping of a proximal segment of the gastrointestinal tract within the lumen of the adjacent segment[2]. This condition is uncommon in adults and the diagnosis is usually made at laparotomy[3]. Most cases of adult intussusception involve the small or large bowel, but it sometimes occurs in the stomach or a surgically created stoma[3,5]. Intussusception may occur at sites of benign or malignant lesions, or may be idiopathic[6].

A metastatic intestinal mass may act as the leading point of the intussusception[8]. Leukemia can produce a tumor mass by leukemic infiltration and hyperplasia of a polypoid nature or by intramural extravasation of blood with the formation of hematomas[7]. An intramural hematoma can be the leading point of each intussusceptum. Patients with acute leukemia usually have thrombocytopenia at presentation or after chemotherapy and are prone to hematoma formation.

The presenting symptoms of intussusception are non-specific in adult patients, but are generally chronic and consistent with partial obstruction[16]. Abdominal pain is the most common presenting symptom, followed by vomiting and bleeding from the rectum[6]. Patients may also present with an abdominal mass or intestinal obstruction[2,16].

Preoperative diagnosis of intussusception is difficult. Plain abdominal films may demonstrate features of intestinal obstruction and reveal the site of the obstruction[17]. Ultrasonography may show “pseudo-kidney” or “hay-fork” signs in the longitudinal view and “doughnut” or “target” signs in the transverse view[18]. The diagnostic accuracy of ultrasonography is dependent on the experience of the radiologist, and may be affected by obesity or the presence of massive air in the distended bowel loops.

Abdominal CT is the most useful investigation for making a preoperative diagnosis, especially in patients with non-specific abdominal pain, and it can help to assess the site and nature of the mass and the relationship to surrounding tissues. CT findings indicative of intussusception may include an apparent mass lesion, a crescent-like, eccentric, low-attenuation fatty mass or a rim of contrast material encircling the intussusceptum[19,20].

Adult intussusception requires surgical intervention[16]. However, there is still controversy regarding the extent of bowel resection, and whether reduction of the intussuscepted lesion should be attempted at operation. The potential risks of preliminary reduction of an intussuscepted bowel include perforation and seeding of tumor cells or microorganisms into the intra-abdominal cavity, venous tumor dissemination, and anastomotic complications of the edematous bowel tissue[21]. Therefore, it is recommended that resection is performed without attempting reduction when there are features of inflammation or ischemia of the bowel, or when malignancy is suspected or confirmed[21]. Our patient had ileocecal intussusception with underlying leukemia, and leukemic infiltration was suspected, so resection of the involved bowel was performed.

In conclusion, intussusception is a rare complication in adult patients with acute leukemia. Diagnosis can be difficult because the presenting symptoms are often non-specific, but abdominal CT can be informative in making a preoperative diagnosis. Resection of the involved bowel is recommended. Intussusception should be considered in any leukemia patients presenting with acute abdomen. A high index of clinical suspicion is important for early diagnosis.

A 29-year-old woman with acute myeloid leukemia (AML) presented with abdominal pain, fever and vomiting, and was finally diagnosed with intussusception.

The clinical presentations of adult intussusception are non-specific and our patient presented with abdominal pain, fever and vomiting.

Other causes of acute abdomen such as intra-abdominal abscess and acute appendicitis were considered and these diagnoses were excluded by imaging.

Laboratory testing may not have been applicable in this case. The white cell count was not reliable because the patient received chemotherapy causing pancytopenia.

Contrast computed tomography showed the terminal ileum invaginating into the cecum. The wall of the cecum and ascending colon were thickened and edematous.

Biopsy of the resected specimen showed leukemic infiltration of the bowel.

There is another case report of intussusception in an adult with AML who presented with epigastric pain, vomiting, and intestinal obstruction; surgery revealed ileo-ileal intussusception.

Intussusception is rarely reported in adult patient with acute leukemia in the literature and it is the uncommon term present in this case report.

Intussusception should be considered in adult patients with acute leukemia presenting with abdominal pain or intestinal obstruction.

The authors reported an interesting case of intussusception in an adult with acute myeloid leukemia occurred during induction chemotherapy. It is important to notice clinical suspicion of this entity, while this complication is rare.