METHODS: One hundred and sixty patients with early colorectal cancer were evaluated for tumor location, clinical history of polypectomy, depth of tumor invasion, and lymph node metastasis. Two radiologists assessed preoperative CT and/or MRI for the primary tumor site detectability, the presence or absence of regional lymph node, and the size of the largest lymph node. Demographic, imaging, and pathologic findings were compared between the two groups of patients based on pathologic lymph node metastasis and optimal size criterion was obtained.

RESULTS: The locations of tumor were ascending, transverse, descending, sigmoid colon, and rectum. One hundred and sixty early colorectal cancers were classified into 3 groups based on the pathological depth of tumor invasion; mucosa, submucosa, and depth unavailable. A total of 20 (12.5%) cancers with submucosal invasion showed lymph node metastasis. Lymph nodes were detected on CT or MRI in 53 patients. The detection rate and size of lymph nodes were significantly higher (P = 0.000, P = 0.044, respectively) in patients with pathologic nodal metastasis than in patients without nodal metastasis. Receiver operating curve analysis showed that a cut-off value of 4.1 mm is optimal with a sensitivity of 78.6% and specificity of 75%.

Two experienced board-certified radiologists (with 10- and 2-year experience in abdominal CT and MRI, respectively) were blinded for histological results and assessed preoperative CT and/or MR images for this study by consensus with access to the endoscopic findings of tumor location. Radiologists recorded the location and size of the mass, detectability of regional LNs 3 mm or larger and the size of regional LNs, when tumors were viewed on CT or MRI. Suspicious lymph nodes less than 3 mm were ignored because they cannot be differentiated from vascular structures or other non-specific soft tissue densities. The corresponding segment mentioned on endoscopy was evaluated for the evaluation of regional LNs, if the primary tumors were not visible; subsequently, radiologists evaluated the mesorectum for cases of rectal cancer and evaluated the sigmoid mesocolon for cases of sigmoid colon cancer. Two readers assessed primary tumor site detectability and the presence or absence of regional lymph nodes. They also measured the largest diameter of primary mass and short diameter of regional lymph nodes. A 3rd radiologist reviewed medical records for a clinical history of polypectomy (or endoscopic mucosal/submucosal resection) when patients were imaged and reviewed colonoscopic and histopathologic reports.

A total of 52 patients underwent CT or MRI after preoperative polypectomy and 17 endoscopic tumor resection sites were detected on CT or MRI among 52 patients. Out of 160 primary colonic masses, 77 tumors (mean size 2.7 cm; range: 0.8-8 cm) were detected on CT or MRI. The tumor location was divided into 5 groups; ascending (n = 17), transverse (n = 15), descending (n = 8), sigmoid colon (n = 50), and rectum (n = 70). A total of 160 early colorectal cancers were divided into 3 groups based on the pathological depth of tumor invasion; mucosa (n = 17), submucosa (n = 133) and depth unavailable (n = 10). A total of 20 (12.5%) cancers with submucosal invasion showed lymph node metastasis; however, there was no lymph node metastasis in any patients with mucosal cancer or with early cancer with unavailable depth. Recognizable lymph nodes were detected in 53 patients on CT or MRI near the primary tumor (Figures 1 and 2) or corresponding colonic segment of endoscopic finding (mean short diameter of lymph node; 4.5 mm, range: 3-14 mm). The average short diameter of 20 pathologic metastatic lymph nodes was 4.8 mm (range: 1.9-8.5 mm). 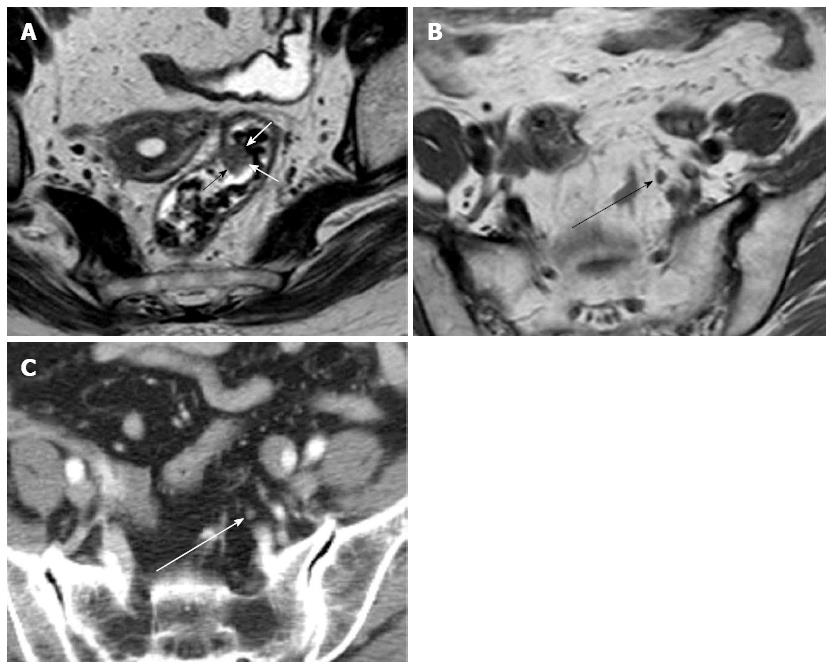 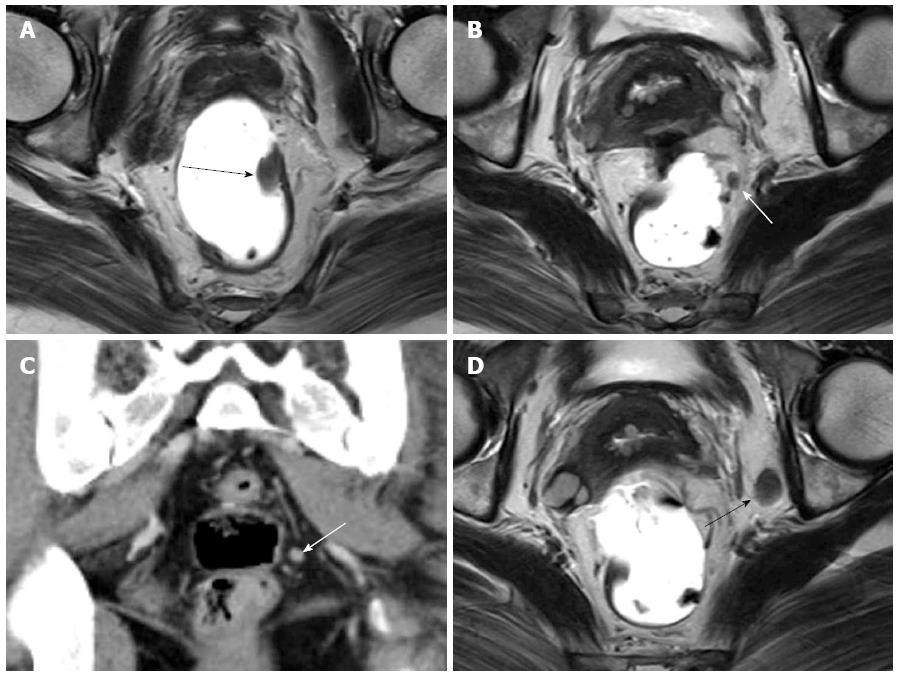 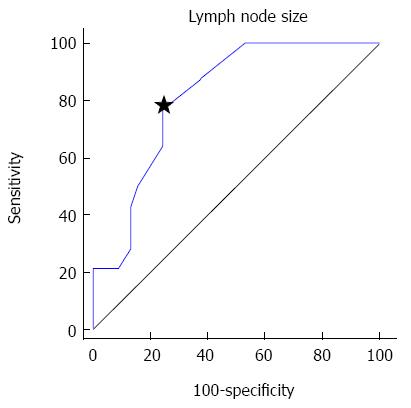 Conventional radiologic lymph node metastasis evaluation is traditionally based on nodal size and shape. There have been significant efforts to assess lymph node metastasis by size or other criteria. In previous reports, one of the general size criteria for nodal metastasis was 1cm in the short diameter[24]. Continuous technological advancements in CT and MR equipment made it possible to detect LNs as small as 5 mm on CT and MRI due to improved image resolution. Additionally, a higher rate of nodal micro metastases smaller than 5 mm has been reported in pathologic reports. Recent studies for rectal cancer presented 5 mm as an optimal size criterion, which showed moderate sensitivity (68%) and specificity (78%)[14-16,21,22]. However, a 5 mm cut-off value for LN metastasis in our early CRC group resulted in a sensitivity of 50% and a specificity of 81.6%. This too low sensitivity was caused by small-sized metastatic LNs. According to the pathologic reports, 30%-50% of metastatic lymph nodes in rectal cancer including both advanced and early cancer were smaller than 5 mm in size[21,22]. In the review of pathologic reports of our early CRCs, the average short diameter of metastatic lymph nodes was 4.8 mm and 56% of metastatic LN was less than 5 mm. Consequently, we need a modified size criterion for early colorectal cancer. The ROC curve analysis of short axis diameter of LNs in our study showed that a criterion of 4.1 mm or larger was optimal to diagnose LN metastasis in early CRC.

One obstacle to a smaller cut-off value of LN diameter was the ability of imaging modalities to detect small lymph nodes. Previous studies indicated that the smallest lymph nodes that can be detected were 5 mm for CT, and 3 mm for MR with using a spiral CT and a 1.5-T MRI[16,22]. Our study differentiated lymph nodes as small as 3 mm from other structures (such as blood vessels) due to the improved resolution of a 64 channel multi-detector row CT.

There are several limitations to our study. It was a retrospective study that may have various biases. Of particular note, most of metastatic LNs could not be correlated with the CT or MRI due to retrospective design. Nevertheless, our study showed significant difference in LN detectability of CT and MRI between metastatic and non-metastatic group. Therefore, our findings imply that LNs around early cancer on CT and MRI require attention in clinical practice. The number of metastatic lymph nodes were relatively small (n = 20); and may not reveal a real difference between the two groups. Selection bias is another inevitable component in a retrospective study. Although our study did not show significant difference among demographic data between nodal metastatic and non-metastatic groups, measurement error or inconsistent sensitivity of radiologists can be a confounding factor. To overcome this limitation, we need further prospective studies. In addition, we did not apply morphologic criteria, because morphologic evaluation was difficult in early CRC due to the small size of the lymph nodes. This study included patients without detectable primary tumors, and a limited evaluation of the corresponding mesocolon of primary tumor. However, our results indicated that the detectability of the primary tumor did not affect the pathologic LN metastasis. In clinical practice, radiologists should evaluate nodal status even in cases blinded to the exact location of the primary colon mass or when not visible due to small size, incomplete colon distention or post removal state. Our results indicated that a careful observation of the corresponding mesocolon segment is still important even in cases without detectable primary colon mass. The final limitation to our study was that the CT scanners used in our study were the most state-of-the-art equipment; 64 channel multi-detector CTs. Further studies are required for the reproducibility of small LN detection of 3 mm in lower-powered 8 or 16 channel CTs.

In conclusion, the advancement in imaging modalities will enable the detection of smaller lymph nodes and the establishment of more accurate size criteria for lymph node metastasis. Lymph node detectability and size of visible lymph nodes on CT/MR were significantly different between pathologic nodal metastatic and non-metastatic groups of patients with early colorectal carcinomas. A 4.1 mm short axis diameter criterion is believed optimal in the CT/MR evaluation of regional lymph node metastasis in patients with early colorectal carcinoma.

Continuous development of computed tomography (CT) and magnetic resonance imaging (MRI) made it possible to detect small LNs by CT and MRI due to improved image resolution. This study evaluates the radiologic risk factors for LN metastasis in early CRCs and develops adequate diagnostic size criteria for LN metastasis in patients with early CRC.

Most of previous studies for evaluation of radiologic criteria included both advanced and early colorectal cancer, but the portion of included early cancer was very small. The size criteria (approximately 0.5-1 cm) for diagnosing metastatic LNs in previous study showed low to intermediate sensitivity, because the ranges of sizes of metastatic and non-metastatic LNs were overlapped. However, the sizes of LNs in the metastatic group and the non-metastatic group were as significantly different in this study. Authors presumed that this different result from previous study was because their study included only early CRCs. They concluded that the differentiated criteria for early CRC is needed and evaluated optimal size criteria for LN metastasis. The newly suggested size criterion for metastatic LNs in early CRC is 4.1 mm, slightly smaller compared to the existing criterion for both advance and early CRC.

For the CT or MRI evaluation of early colorectal cancer, an application of a differentiated size criterion from advanced cancer for LN metastasis could be helpful in management planning for early CRC.