Cirrhosis is the main complication of chronic liver disease, leads to progressive liver function impairment and is the main risk factor for the development of liver cancer. Liver failure at endstage cirrhosis is associated with increased mortality with liver transplantation as the only possible treatment at this stage. The pathogenesis of liver cirrhosis is not completely elucidated. Although the common factors leading to liver injury, such as viral hepatitis, alcohol consume or fatty liver disease can be identified in the majority of patients a small percentage of patients have no apparent risk factors. Moreover given the same risk factors, some patients progress to cirrhosis whereas others have a benign course, the reason remains unclear. In order to develop new diagnostic and therapeutic tools, it is s essential to understand the pathogenesis of cirrhosis. The identification of genetic risk factors associated with cirrhosis is one of the possible approach to achieve these goal. In the past years several studies have supported the role of telomere shortening and cirrhosis. In the recent year several studies on the relation between several single nucleotide polymorphism (SNPs) and cirrhosis have been published; it has been proposed also a cirrhosis risk score based on seven SNPs. Also epidemiological studies on identical twins and in different ethnic groups have been supporting the importance of the role of genetic risk factors. Finally in the very recent years it has been suggested that telomere shortening may represent a genetic risk factor for the development of cirrhosis.

Cirrhosis represents the main complication of chronic liver disease[1-3], leads to progressive liver failure, eventually to hepatocarcinoma[4] and is associated with increased mortality[5] with liver transplantation as the only possible therapeutic option at this stage. The pathogenesis of liver cirrhosis remains unclear and although the common risk factors, such as viral hepatitis, alcohol and non-alcoholic fatty liver disease (NAFLD) can be identified in the majority of patients, there is a small percentage of patients with no identifiable risk factors[6]. Moreover it is known that patients with the same risk factors present different clinical manifestations, some develop cirrhosis and hepatocarcinoma (HCC) others have a benign course, the reason of the different evolution is not completely elucidated[7]. Understanding the complex pathogenesis of cirrhosis is important for its prevention and to identify new diagnostic tools as well as new therapeutic options; one of the possible approaches to this issue might be to understand the genetic bases of cirrhosis[8,9].

In the past years several studies have supported the role of telomere shortening and cirrhosis.

In a recent study it was proposed a cirrhosis risk score (CRS) based on a panel of seven single-nucleotide polymorphisms (SNPs) in six genes: AP3S2, AQP2, AZIN1, STXBP5L, TLR4, TRPM5 and in the intergenic region between DEGS1 and NVL for identifying the risk of developing cirrhosis in Caucasian patients with chronic hepatitis C infection[10]. The CRS performance resulted even a better predictor of cirrhosis than clinical factors. It is also been utilized and validated in another study on patients with hepatitis C virus (HCV) hepatitis[11], it was observed that host genetics defined by CRS, predict fibrosis progression and may help for prognostic evaluation and treatment decision.

A study by Browning et al[15] revealed that given the same prevalence of diabetes in Hispanics and African Americans they had a different cryptogenic cirrhosis’ prevalence, respectively, 3-fold higher and 4-fold lower compared to European Americans; these finding not only indicate that this form of cirrhosis is unexpectedly rare among Afro Americans, but indicate also that there is a different genetic predisposition among different ethnic groups.

In addition to the results from SNP and epidemiological studies, recently it has been suggested that telomere shortening may represent a genetic risk factor for the development of cirrhosis.

Telomeres consist of repetitive DNA sequences (TTAGGG) located at the ends of linear chromosomes. They function as a cap to stabilize and protect chromosomes from erosion and from being mistaken for double-strand DNA breaks. During each cell division, telomeres shorten due to the ‘‘end-replication problem’’ that is the DNA polymerase’s inability to fully replicate the 3’ end of chromosomes. Telomere attrition is avoided by telomerase that elongates telomere DNA after each cell division[17]. In conditions of chronic liver injury there is a high cell turnover as a regeneration and repair process, telomeres become too short and the cell does not divide anymore, the mechanisms by which cell growth arrest is profibrogenic is not yet defined (Figure 1). 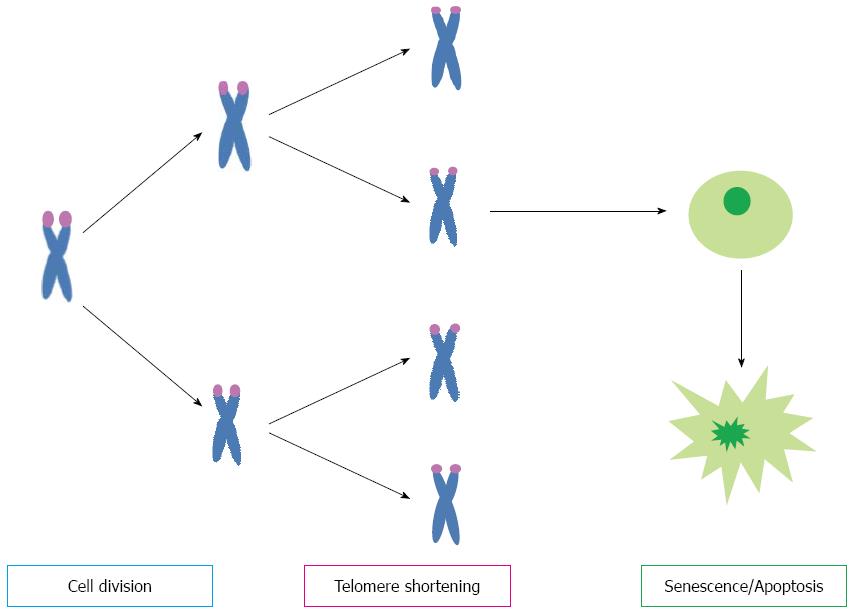 Figure 1 Telomere shorten at each cell division, when they became critically short cellular signaling cascades are activated resulting in cell senescence or apoptosis.

Several studies have investigated the relationship between cirrhosis and telomere shortening. Studies on humans showed that shortened telomere length in hepatocytes is correlated with degree of fibrosis and it may be considered as a marker of cirrhosis formation. In 1995 Kitada et al[18] demonstrated the relationship between telomere shortening and liver cirrhosis. They observed that telomere length was increasingly shorter in tissue from cirrhotic and chronic hepatitis livers and obviously shorter than normal liver tissue. Following studies confirmed that telomere length was related to the degree of fibrosis, suggesting that it may contribute to the development of cirrhosis[18-20].

Moreover, studies on telomerase-deficient mice provided experimental evidence that shortened telomeres, in response to chronic liver injury, are associated with impaired liver regeneration and accelerated cirrhosis development. Restoration of telomerase activity into the liver of these mice resulted in reduction of cirrhosis and improved liver function[21]. These findings suggest that reduced telomerase activity may contribute to cirrhosis development. Mutations in the telomerase complex genes have been implicated in rare human diseases characterized by accelerated telomere shortening and organ failure such as dyskeratosis congenita. Interestingly, patients suffering from these diseases showed an increased frequency of liver pathologies including fibrosis and cirrhosis[22]. Recently, two studies have also investigated the frequency of telomerase mutations in patients with sporadic cirrhosis compared to healthy controls[21,22]. Both studies screened patients for variation in the TERT and TERC genes. In the first study by Calado et al[23]. The Authors found missense mutations in the TERT and TERC genes. The frequency of TERT gene mutations in cirrhotic patients was significantly greater than controls. Moreover cirrhosis was also associated with shorter telomeres in peripheral blood leukocytes. Finally, most TERT variants showed reduced telomerase activity in vitro. In the second study Hartmann et al[24]. Screened patients with sporadic cirrhosis and noncirrhotic controls for telomerase mutations. Of note, control group was composed of 473 healthy individuals and 127 patients with chronic HCV infection who did not develop cirrhosis during a long follow-up. The data analysis revealed a significantly increased frequency of telomerase mutations in the cirrhosis group compared to the control group. Again, TERT gene mutations in cirrhotic patients were associated with reduced telomerase activity in vitro and shorter telomeres in peripheral blood leukocytes compared to non-cirrhotic patients. Our group recently reported on the coexistence of cryptogenic cirrhosis (CC) and IPF, not in the setting of dyskeratosis congenita, and telomere dysfunction[25]. In our study was described a case of a 48-year-old woman, diagnosed of cryptogenic liver cirrhosis, idiopathic pulmonary fibrosis and diabetes. Both CC and IPF had a rapid progression and after eighteen months the patient died. Sequencing and mutation analysis of TERT and TERC genes demonstrated the presence of a heterozygous TERT mutation (L153M). The TERT L153M variant results in a change of methionine for leucine at amino acid 153, in the protein region that seems to be involved in the template RNA and telomeric DNA binding. Furthermore, leukocyte telomere length was significantly shorter. Our case report gives further evidence of telomere involvement in liver disease progression and suggests short telomere as genetic risk factor for cirrhosis. Moreover very recently our group reported on a similar case of a 58 years old man who presented a short telomere syndrome : pulmonary fibrosis, mild bone marrow fibrosis and a liver cirrhosis. The patient was an active smoker and obese. He rapidly developed ascites and progression of the pulmonary fibrosis, the patient became oxygen-dependent in few months. He presented a very short leukocyte telomere length and reduced telomerase activity compared to a group of controls, but did not show any hTERT and hTERC genes mutations[26]. Since the prevalence of telomerase mutations seems to be rather low in the general population, they may not be the major contributing factor to cirrhosis. Probably looking for telomerase genes mutations only, there is the risk to underestimate the real contribution of the telomere system dysfunction to the development of cirrhosis. In fact other components of the telomere complex such as dyskerin and the telomere binding proteins have been shown to be important for telomerase activity[27]. Mutations in these components can lead to an impairment of telomere function; recently a mutation of the binding protein TIN2 has been involved in the evolution of aplastic anemia[28]. Finally also the mutations in the noncoding sequence of TERC and TERC could be responsible for impairment in the expression of TERC and TERT. Probably the sequence analysis of all components of the “telomere system or telosome” will reveal the real contribution of telomere complex genes mutations to the development of liver cirrhosis. Together, the current data would suggest that telomere attrition may play a role in the sequence of events leading to cirrhosis. According to this view chronic liver injury induces hepatocyte regeneration and therefore an elevated cell turnover; hence increased telomere shortening and cell senescence. Eventually, if the injury persists, other cells, such as stellate cells become activated leading to fibrogenesis[29]. Therefore telomerase mutations might be considered as genetic risk factors for cirrhosis and telomere shortening as an important step in its pathogenesis. A clinical implication of these findings would be the future use of assay of telomerase gene mutations in the selection and treatment of patients with liver disease[7]. What is the relationship between cirrhosis, HCC and telomere complex dysfunction? Since carcinogenesis reactivate telomerase activity, it is not clear yet if patients with telomerase mutations have a greater predisposition to develop HCC after cirrhosis[7]. More data and larger studies are needed to understand the real impact of telomere dysfunction on HCC development. It is not known; neither is clear why some patients with cirrhosis will develop HCC relatively early in the natural history of cirrhosis whereas others with more advanced stages of liver dysfunction do not develop HCC; if this could be related to telomere dysfunction needs to be investigated. Future studies with large number of patients are needed to provide answers to these questions.