Core tip: Primary retroperitoneal mucinous cystadenomas are very rare tumors for which the biologic behavior and histogenesis remain speculative. No effective diagnostic measures have been established for an accurate preoperative diagnosis of these tumors. Symptoms of these retroperitoneal masses are caused by exertion of pressure and obstructive effects on adjacent organs. This report describes a case of a large, primary retroperitoneal mucinous cystadenoma in a female patient, which was visualized on multidetector computed tomography exam and completely enucleated at laparotomy.

Tumors range between 7 cm and 30 cm in size[4], and most commonly present with nonspecific abdominal pain or distension and a palpable abdominal mass, which induces mass effect on adjacent organs. Acute abdomen pain due to intestinal obstruction caused by PRM cystadenoma has also been reported[5]. PRM cystadenomas are typically discovered with standard imaging modalities [computed tomography (CT), magnetic resonance imaging (MRI), ultrasound]. However, laboratory and imaging findings are inconclusive in the majority of cases, and definitive diagnosis is obtained only after histologic examination. In this report, we describe a case of a large PRM cystadenoma in a female patient, which was visualized on multidetector CT exam and completely enucleated at laparotomy.

A 60-year-old female patient was admitted to our hospital because of abdominal pain and a palpable mass in the left lower abdominal quadrant. The symptoms had been present for 3 mo. Laboratory findings and tumor markers were within reference ranges. Multidetector CT (MDCT) scanning revealed a large (12.3 cm × 10.8 cm) cystic mass in the left hemiabdomen located within the retroperitoneal space (Figure 1). Volume rendering and three-dimensional reconstruction of the MDCT showed an oval, well-delimited, cystic lesion located in the left retroperitoneal space and embedded in the left iliac fossa, but without infiltration of surrounding structures (Figure 2). The differential diagnosis included a mesenterial pseudocyst and cyst of the left ovary. 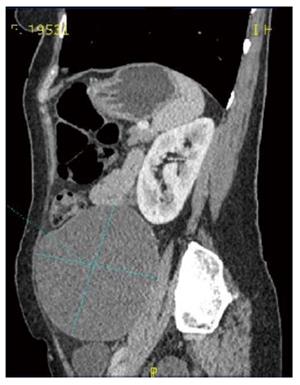 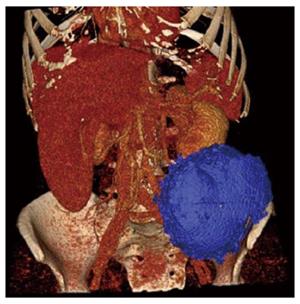 A midline laparotomy was performed, revealing the mass located between the left portion of the anterior abdominal wall and the lateral border of the left psoas muscle, embedded in the left iliac fossa. The cystic tumor was completely removed (Figure 3) and sent for histopathologic assessment. Hematoxylin and eosin staining revealed a single layer of mucin (MUC)-producing columnar epithelium with underlying fibrous connective tissue and rare papillation, but without invasion (Figure 4). Immunohistochemistry for MUC identified unevenly distributed moderate cytoplasmic expression of MUC1 and MUC2, and strong cytoplasmic expression of MUC5AC (Figure 5). Strong nuclear CDX2 immunoreactivity was also observed. Therefore, a diagnosis of PRM cystadenoma was confirmed. 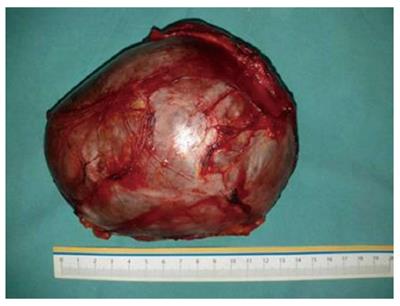 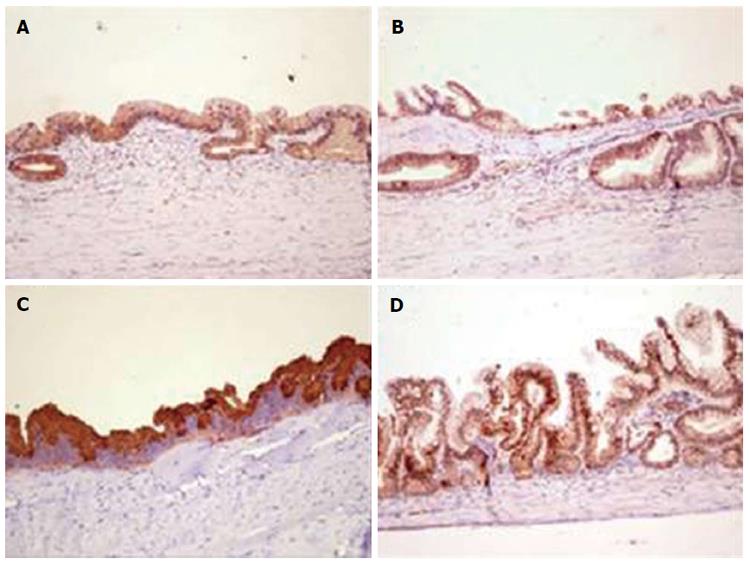 There are several theories explaining the development of PRM cystademonas, including origination from a teratoma, ectopic ovary, or mucinous metaplasia of the mesothelial lining. Subramony et al[13] found that stromal cells in PRM cystademonas express the estrogen receptor, which may be why these tumors are more frequently found in women. Also, the growth of the tumor could be a consequence of estrogen activity via estrogen receptor activation. In men, the undescended testicle is a potential source of tumor cells, as the retroperitoneum has no epithelial cells[9].

There are no pathognomonic clinical or radiologic findings for this disease, thus obtaining an accurate preoperative diagnosis with standard imaging modalities is nearly impossible. PRM cystadenomas usually present as a multi- or unilocular cystic mass, varying in size and localized anywhere in the retroperitoneal space, without adherence to the ovaries. Imaging findings often include displacement of the ureter, kidney, liver, and large abdominal vessels. The diagnostic value of MRI and CT is similar; MRI provides a variety of images and can identify correlations between the mass and the soft tissues[8], whereas CT reveals the extension of the mass and shows mural calcifications, which support the diagnosis of cystadenoma rather than teratoma.

Laparotomy with complete surgical excision of the tumor has been the therapy of choice in most reported cases, as well as it was in our case; although, a laparoscopic approach can also be successfully performed[14]. When diagnosed, complete surgical enucleation of the tumor is always advised, due to complications such as compression effect on adjacent organs, infection, and rupture or malignant transformation of the tumor. Therefore, when a retroperitoneal cystic mass is encountered, mucinous cystadenoma should be taken into consideration. The small number of globally registered cases and insufficient surveillance data show that there is a need for effective registration and further study of these rare tumors.

A palpable mass in the left lower abdominal quadrant, with no palpable lymphadenopathy or hepatosplenomegaly.

Laboratory findings and tumor markers were within reference ranges.

Laparotomy with complete surgical excision of the tumor.

This report describes a female patient with abdominal pain and a palpable mass in the left lower abdominal quadrant. Laboratory findings were within reference ranges, and a large cystic mass was observed in the left hemiabdomen within the retroperitoneal space upon multidetector CT scanning. The tumor was diagnosed as a primary retroperitoneal mucinous cystadenomas upon histopathologic examination.

This article applies laparotomy and the complete resection of the tumor, with pathologic and valuable immunohistochemistry reports to confirm the final diagnosis of primary retroperitoneal mucinous cystadenoma.