Weber-Christian disease (WCD) is an inflammatory disease whose main histological feature is lobular panniculitis of adipose tissue. The location of panniculitis determines the clinical presentation, being the subcutaneous adipose tissue the most frequent one, followed by liver, spleen, bone marrow and mesenteric adipose tissue. Systemic corticosteroids are first line treatment, but other options should be considered if systemic symptoms are observed or in case of refractory clinical situation. We report herein a case with WCD showing orbital, mesenteric and ileocolonic involvement, which required surgical treatment and also developed postoperative recurrence. Symptoms were resolved by administration of thalidomide and, afterwards, infliximab. To our knowledge, this is the first report of Weber-Christian disease with luminal ileocolonic involvement, treated with infliximab.

Core tip: Weber-Christian disease is an autoimmune panniculitis affecting most frequently subcutaneous adipose tissue; liver, spleen, bone marrow and mesenteric adipose tissue might be also involved. We report a case of this uncommon disease with luminal ileocolonic involvement, mimicking Crohn’s Disease, which required hemicolectomy and distal ileum resection. As the intestinal inflammation and symptoms recurred after surgery infliximab was started, leading to an improvement in clinical and radiological signs.

Weber-Christian disease (WCD) was first described by Pfeifer in 1892, and established in the 1920s by Weber and Christian. Its etiology is unknown and it can be described as an autoinflammatory disease affecting adipose tissue. Its main histological feature-and the key for the diagnosis - is lobular panniculitis. The location of panniculitis determines the clinical presentation, being the subcutaneous adipose tissue the most frequent one. Therefore, the disease is characterized in most of the patients by the development of painful subcutaneous nodules, usually located in limbs and torso; systemic symptoms and signs such as relapsing fever episodes, fatigue and polyarthralgia are also frequent. Other locations such as liver, spleen, bone marrow and mesenteric adipose tissue might be affected; such cases have been associated with a significant mortality[1-3]. Most patients respond to corticosteroid therapy; nevertheless other treatment options must be considered, especially when systemic manifestations or steroid-dependencedevelop. We report herein a case with WCD showing orbital, mesenteric and ileocolonic involvement, which required surgical treatment and also developed postoperative recurrence. Symptoms were resolved by administration of thalidomide and, afterwards, infliximab.

A 42-year-old, Latin American woman was admitted into our hospital, presenting a 72-h history of fever and right exophthalmos. She was evaluated since childhood because recurrent urinary tract infections, amigdalytis and oral aphtoid ulcers. She referred an episode of pancytopenia (10.9 gr/dL hemoglobin; 1200 leucocytes, 104000 platelets) 6 years before, which was related to bone marrow hemophagocytic lymphohistocytosisoriginally attributed to Epstein Barr virus infection. She needed granulocyte colony-stimulating factor (G-CSF) therapy, and immunosuppressive treatment, initially cyclosporine that was not effective and withdrawn, and later prednisone. No history of skin nodules or unknown origin fever was suffered during childhood or youth.

On admission, an orbital CT scan was performed confirming the protrusion of the right eyeball due to a significant enhancement of the soft tissue in the right orbit. Surgical samples showed adipose tissue with a cellular infiltration composed by foam histiocytes, small non-cytotoxic lymphocytes (CD3+, CD8/GzB-) and multinucleated foreign-body giant cells around peri-adipocyte granulomas. Microbiological stains (Gram, PAS, Ziehl) were negative. On this basis, diagnosis of lobular panniculitis (probable WCD) was made and oral administration of 1 mg/kg per day prednisone started, followed by a gradual tapering and switch to cyclosporine (8 mg/kg per day). Fever and orbital inflammation improved rapidly, and clinical remission was achieved; 3 mo later cyclosporine treatment was stopped. Eight months after the first episode the patient was readmitted because of a 24-h history of fever and abdominal pain. Laboratory findings showed raised inflammatory markers (C-reactive protein (C-RP) 13.7 mg/dL) and pancytopenia (hemoglobin 10.6 gr/dL, platelets 103000/mL, leucocytes 2200/mL, neutrophils 1600/mL, lymphocytes 530/mL). Renal function, liver biochemistry, lactate dehydrogenase, creatin-phosphokinase, pancreatic amylase were normal. 1-antitrypsin was normal. Antinuclear and anti-double stranded DNA were negative. An abdominal CT scan demonstrated thickening of cecal and terminal ileum wall, with associated enhancement of mesenteric adipose tissue (Figure 1). Colonoscopy showed alarge cecal ulcer covered with fibrin and nodular, hyperemic and friable margins; terminal ileum intubation was not possible because of ileocecal valve inflammation and stenosis. In this setting, differential diagnosis between Crohn’s Disease, Non-Hodgkin Lymphoma, infectious ileocolitis, luminal involvement of WCD or other systemic inflammatory disease as lupus was proposed. Histological analysis of the endoscopic biopsies showed a chronic, non-specific inflammatory infiltrate of the lamina propria. All cultures were sterile, however a 15-d meropenem treatment was performed. As increasing suspicions of inflammatory mediated disease, intravenous cyclosporine (1 mg/kg) was started again aswell as prednisone (1 mg/kg); after failure of medical treatment and the development of obstructive symptoms two weeks later, laparoscopic right hemicolectomy and distal ileum resection with ileostomy was performed. Histological study of the surgical specimen (Figure 2) revealed lobular lympho-histiocytic panniculitis (CD68+ histiocytesand non cytotoxic lymphocytes inflammatory infiltrates surrounding pericecal adipose tissue), lipophagic granulomas and a deep cecal ulcer surrounded by thrombosed vessels. No vasculitis, epithelioid granulomas, parasitic, fungal or viral elements were seen. Fourteen days after surgery the patient was discharged keeping cyclosporine as maintenance treatment, but three days later she was readmitted presenting fever and abdominal pain. An abdominal CT showed a thickening of the last segment of ileum and ileostomy. Based on previous reports[4], and assuming such clinical manifestations as a WCD recurrence once infectious complications were ruled out, treatment with thalidomide was started (50 mg per day). Clinical situation improved significantly in the following days but after 14 d of treatment and being the patient in clinical remission, she started to refer symmetric dysesthesia in lower extremities, with associated hyperreflexia. These signs were attributed to thalidomide-related neurotoxicity and the drug was withdrawn. Thus, and based on a recent report of successful treatment of orbital WCD[5],infliximab was started (5 mg/kg, repeated at week 2, 6 and then every 8 wk after achieving clinical and endoscopic remission). Eight months later, a new endoscopy through ileostomy was performed showing no pathological findings; the patient underwent subsequent ileocolonic anastomosis, keeping clinical and endoscopic remission after two years of follow-up. 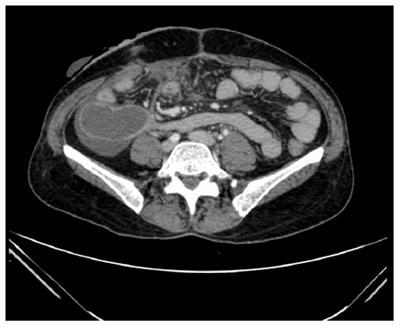 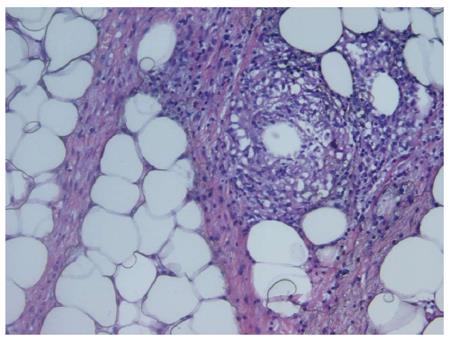 Intraabdominal manifestations of WCD have been described previously. A review of the literature was performed, searching for combination of the following items: “Weber-Christian disease”; “idiopathic lobular panniculitis”; “ileitis”; “colitis”. Mesenteric panniculitis is a chronic fibrosing inflammation of the mesentery of small and large intestine. It is reported in the literature under several names: mesenteric panniculitis, isolated lipodystrophy of the mesentery, retractile mesenteritis, sclerosing mesenteritis, or mesenteric lipomatosis. This fact has caused considerable confusion, and reflects the unspecific nature of its pathogenesis and clinical manifestations[2]. Therefore, it is difficult to clarify its real epidemiology, as it seems to be often underdiagnosed. It is usually asymptomatic, but may cause abdominal pain, bloating, distension and diarrhea. In symptomatic patients active treatment may be necessary, mainly immunosuppressants as corticosteroids, azathioprine or metothrexate, and surgery must be considered in case of acute complication (perforation)[7] or absence of medical therapy efficacy. This entity can be identified in the setting of several diseases, including surgery, trauma, infection[8], malignancy[9,10], rheumatological diseases as SLE and Henoch-Schonlein Purpura[11], granulomatous diseases and pancreatitis[12], alpha 1 anti-trypsine deficiency, Ig G4-related disease[13].

Luminal involvement without mesenteric affection has also been described by Kiguchi et al[14]. They report a case of a 57-year-old man diagnosed of WCD that required emergent surgery exploration due to sudden abdominal pain, finding three perforations of the ascending colon and two perforations of the distal ileum. Right hemicolectomy and ileal resection was performed, and subserosal acute panniculitis was demonstrated to be the cause of the perforations. He presented no recurrence of the intestinal involvement of WCD. In this setting, other causes of enteritis should be rulled out, as Crohn’s Disease, Non-Hodgkin Linfoma, infectious ileocolitis, autoimmune diseases as SLE15 (with or without mesenteric vasculitis). Moreover, other entities such collagen vascular diseases, lymphoproliferative disorders, SLE[15] and pancreatic lesions may cause abdominal pain and subcutaneous nodules, and should be taken into account for differential diagnosis.

To our knowledge, there are no published cases describing luminal intestinal manifestations due to WCD successfully treated with IFX. Al-Niaimi et al[16] describe a corticoid-refractory case of lobular panniculitis with subcutaneous involvement successfully treated with IFX, after therapeutical essays with cyclophosphamide, hydroxycloroquine, dapsone, potassium iodide and azathioprine. Mavrikakis et al[5] also present a WCD case with orbital and subcutaneous involvement with dramatical response to IFX, and switch to Adalimumab due to hypersensitivity, with long-term sustained response. Finally, therapy with IFX combined with methotrexate and corticosteroids reached improvement in clinically life-threating sclerosing mesenteritis in a 8 year-old boy newly diagnosed with celiac disease[17].

A 42 year-old women diagnosed 8 mo before with Weber-Christian disease (WCD) was admitted in our institution with fever and abdominal pain.

Right hemicolectomy and primary anastomosis.Postoperative recurrence was managed with thalidomide, interrupted because of related neurotoxicity. Infliximab induction doses (5 mg/kg at weeks 0, 2 and 6, and every 8 wk after) were administered and remission was achieved.

Orbital and subcutaneous involvement of WCD cases have been treated with IFX. No reports concerning antiTNF therapy in luminal digestive disease have been described.

Panniculitis is an inflammatory disorder of subcutaneous tissue that can be divided in two subtypes: lobular and septal.

WCD is an immune-mediated inflammatory disease that may cause severe ileocolonic inflammation. Biologic agents blocking TNF-α may be considered for treatment of refractory cases.

This article remarks in the differential diagnosis of ileo-colonic wall inflammation, and potentially safety and efficacy of IFX treating inflammatory conditions of the intestine.