AIM: To evaluate whether postoperative radiotherapy is an alternative to neck lymph node surgery and if it provides a survival benefit for those receiving two-field, chest and abdomen, lymphadenectomy.

METHODS: A total of 530 cases with middle and lower thoracic esophageal carcinoma in our hospital from January 2008 to April 2009 were selected and analyzed, of which 219 cases received right chest, upper abdominal incision Ivor-Lewis surgery and simultaneously underwent mediastinal and abdominal two-field lymphadenectomy. If regional lymph node metastasis occurred within the recurrent laryngeal nerve, the patients would receive bilateral supraclavicular radiotherapy (DT = 5000cGy) to be adopted at postoperative 4-5 wk (Group A) or cervical lymphadenectomy at postoperative 3-4 wk (Group B). If there were no regional lymph node metastases within the recurrent laryngeal nerve, the patients only underwent two-field, chest and abdomen, lymphadenectomy (Group C).

CONCLUSION: For patients with middle and lower thoracic esophageal carcinoma combined with lymph node metastasis within the recurrent laryngeal nerve, cervical radiotherapy can be a substitute for surgery and provide benefit.

After preoperative examination, patients who had a definitive diagnosis of esophageal squamous cell carcinoma, with the location of the tumor in the middle and lower thoracic cavity, expected to achieve R0 resection at surgery, with no evidence of distant metastasis were included. Exclusion criteria: (1) the presence of preoperative palpation or ultrasound or positron emission tomography computed tomography (PET-CT) indicated that there were obvious cervical lymph nodes, highly suspicious transfers, or after pathological examination, cervical lymph node metastasis was confirmed (such patients need surgery before radiotherapy and chemotherapy); (2) preoperative diagnosis by CT or endoscopic ultrasound (EUS) of T4 (such patients tend to have lower rates of surgical resection, surgery is required before radiotherapy and chemotherapy); (3) patients with severe disease (severe cirrhosis, diabetes or heart and lung complications); and (4) patients with a history of previous gastric resection surgery (usually not as a substitute for the esophageal tube after surgery).

Patients with lower thoracic and cardia cancer, or confirmed adenocarcinoma through preoperative histological examination, were also excluded (such as specific pathological types, and if there was a possibility that accumulation at lower esophageal gastric region was present).

A total of 530 cases with middle and lower thoracic esophageal carcinoma in our hospital from January 2008 to April 2009 were selected and analyzed, of which 219 cases receiving right chest, upper abdominal incision Ivor-Lewis surgery, and simultaneously undergoing mediastinal and abdominal two-field lymphadenectomy, met the above criteria. Of 219 cases, 91 cases were diagnosed with regional lymph node metastasis within the recurrent laryngeal nerve. Among these, 48 cases received cervical radiotherapy at postoperative 4-5 wk (Group A), 43 cases underwent second cervical lymphadenectomy at postoperative 3 wk (Group B); 128 cases of postoperative recurrent laryngeal nerve pathology without lymph node metastasis received only two-field lymphadenectomy.

Abdominal surgical procedures: After abdominal incision, patients received abdominal surgery. Tissue was removed at a distance of ≥ 5 cm from the lower edge of the tumor, cardia and proximal stomach, where a gastric tube would be made. Simultaneously, abdominal lymph node resections were undergone (including the 16th set of pericardial lymph nodes, 17th set at drainage area of the left gastric artery, 18th set at the drainage area of common hepatic artery, 19th set at traveling area of splenic artery, 20th set of lymph nodes around the celiac artery) as shown in Figure 1.

Thoracic surgical procedures: Thoracic surgery was undergone through a posterolateral incision at the right side, dissociated almost from the entire thoracic esophagus; meanwhile, mediastinal lymph node regions were removed on the recurrent laryngeal nerve (2, 3, and 4 sets), as shown in Figure 2A and 2B, especially the cervicothoracic junction within the thoracic lymph entrance, and the middle and lower mediastinal lymph nodes (7, 8, 9, 10, and 16 sets), as shown in Figure 2C. 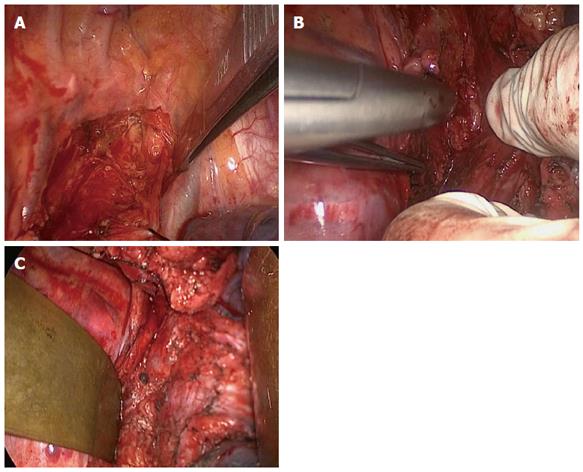 At the edge of the tumor lesions at ≥ 5 cm, the esophagus was cut, and a gastric tube was put into the thoracic cavity as a substitute. Through the esophageal bed, the stomach and top right pleural esophagus was anastomosed. 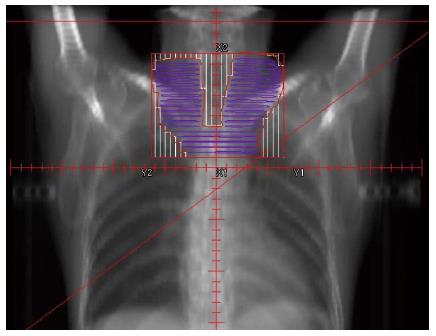 The data were analyzed using Mann Whitney’s U-test and Fisher’s exact test. Kaplan-Meir survival curves were used to analyze the subsistence data. The differences between groups were compared using log-rank test. P < 0.05 was considered to be statistically significant.

The characteristics of the three groups are shown in Table 1. The UICC TNM classification (the 7th edition) was used for staging. Significant differences in patient age, gender and tumor location were not observed.

Comparison of recurrence and metastasis

Cause-specific survival curves for groups A and B are shown in Figure 4. The 5-year survival rates of groups A and B were not significantly different, at 47% and 50%, respectively. 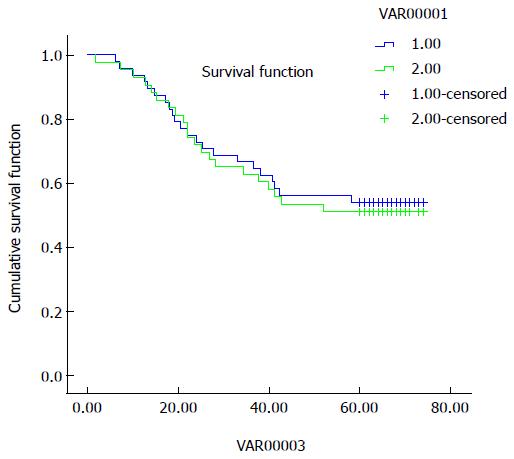 Figure 4 Cause-specific survival curves for groups A and B.
DISCUSSION

In our study, only 91 cases with postoperative recurrent laryngeal nerve lymph nodes from 219 patients received two-field lymphadenectomy; these were considered to need follow-up treatment on cervical lymph nodes. The similarities of radiotherapy and surgery are that both of them can kill local tumor cells, but radiotherapy has the comparative advantage over surgery in that it is relatively non-invasive, and can reduce the patients’ psychological and physical adverse effects. Thus, for patients receiving two-field lymphadenectomy, can radiation therapy be used to replace the operation when there is the possibility of cervical lymph node metastasis? Based on this idea, we had 91 cases of two-field lymphadenectomy, of whom 48 patients were treated with postoperative cervical radiotherapy and 43 cases were given cervical lymphadenectomy. The results showed there was no significant difference in cervical lymph node recurrence rate between the two groups, while the 5-year survival rate was not significantly different in comparison. In other words, with this model, it can still achieve the efficacy of lymph node dissection without additional surgery. Postoperative cervical radiotherapy can reduce the pressure on doctors, reduce surgical trauma to patients, avoid neck incision, and be more easily accepted mentally.

In conclusion, for middle and lower thoracic esophageal carcinoma patients, postoperative radiotherapy after bilateral supraclavicular lymph node surgery can avoid cervical lymph node surgery, and the clinical efficacy is the same as with three-field lymphadenectomy.

A surgical procedure is the main method for treatment of esophageal cancer, and usually includes three aspects: tumor resection, lymph node resection and digestive tract reconstruction. Regarding lymph node resection, the scope and eradication are key factors influencing the surgical efficiency and also the focus of clinical research. Due to the special anatomic and lymphatic draining characteristics, neck, chest and abdomen are possible locations of metastasis. Theoretically, resections of all the possible lymph nodes may maximize the eradication, which however causes increased trauma during surgery. Currently, resections of thoracic and abdominal lymph nodes are the consensus of scholars dedicated to esophageal surgery. Thus, how to choose the appropriate patients for cervical lymphadenectomy and whether some surgical procedures can be replaced by non-surgical methods are investigated in this study.

In this study, the authors did not use techniques such as ultrasound, computed tomography, etc. to predict the lymph node status, but predicted cervical lymph node status according to the patterns of lymph node metastasis and pathological status of lymph nodes in the recurrent laryngeal nerve region. Based on this, selective subsequent treatment was performed, which avoided false positive results and micro-metastasis of technical methods. The obvious difference from previous studies is that they replaced traditional surgery with radiotherapy, which reduced the injuries of patients while relieving the mental pressure of both physicians and patients.

This study proved that it is feasible to selectively perform cervical lymphadenectomy according to the patterns of lymph node metastasis and the pathological status in the thoracic recurrent laryngeal nerve region. Therefore, surgical procedures might be replaced by regional radiotherapy. Furthermore, the regional recurrence rate and the 5-year survival rate were not significantly different from surgical procedures. Additionally, radiotherapy produces lighter injuries than surgery. Therefore, it is more easily accepted by patients and widely used clinically.