IgG4-related disease is a recently recognized entity linked initially to autoimmune pancreatitis and has been subsequently described in nearly every organ system. Men over the age of 50 represent the most affected demographic group and a comprehensive set of diagnostic criteria has been developed to aid treating clinicians. Though elevated levels of IgG4 in the serum are suggestive of the disease, definitive diagnosis is made on histopathology. Treatment is tailored to the clinical presentation with corticosteroid therapy known to have proven efficacy. Gastric manifestations of the IgG4-related disease primarily come in two varieties, notably chronic ulceration or pseudotumor formation. Autoimmune pancreatitis conveys increased risk for IgG4-related disease of the stomach, which is independent of Helicobacter pylori status. In this case report, we present an acute gastric-pericardial fistula secondary to IgG4-related disease that required urgent operative management. To our knowledge, this is the first report in the medical literature describing this complication of IgG4-related disease.

Core tip: IgG4-related disease has been an increasingly recognized entity affecting multiple organ systems. Lesions may mimic neoplasms, yet corticosteroid therapy is highly efficacious. In the stomach, manifestations include ulceration and pseudotumor formation. This case report describing a complication of the disease, notably an acute gastric-pericardial fistula has yet to have been described in the medical literature.

IgG4-related disease was first recognized as a new clinicopathological entity by Kamisawa et al[1] in 2003 when extrapancreatic manifestations were diagnosed with higher frequency in patients with autoimmune pancreatitis (AIP). Multiple organ systems are now known to be affected by the disease, including gastrointestinal, hepatobiliary, pulmonary, genitourinary, cardiovascular, lymphatic, skin, salivary, endocrine and central nervous system[1-9]. Furthermore, with respect to gastric disease, autoimmune pancreatitis is a risk factor for high prevalence of chronic gastric ulceration, which is independent of Helicobacter pylori (H. pylori) infection status[10,11]. In this case report, we describe a patient who underwent urgent repair of a gastric-pericardial fistula secondary to chronic gastric ulceration by a dense lymphoplasmacytic infiltrate of IgG4-positive plasma cells. To our knowledge, this complication of IgG4-related disease has not yet been described in the medical literature.

The patient is a 65 years old male with a history of tobacco abuse and poor hygiene, who three years prior to the current presentation underwent an emergent antrectomy with Roux-en-Y reconstruction secondary to massive bleeding from erosion of a posterior duodenal ulcer into the gastroduodenal artery (GDA) and penetration into the pancreatic head. The bleeding was arrested by undersuturing of the GDA in four quadrants, and a tube duodenostomy was utilized to manage the difficult stump. Post-operative course was unremarkable and he was discharged home after 10 d. He was followed by the gastroenterology service with findings of a benign marginal ulcer at the gastro-jejunal anastomosis on endoscopy which was treated conservatively, though the patient was poorly compliant and lost to follow-up.

At this time he presented to the emergency department with a three day history of intense upper abdominal and inter-scapular back pain, associated with fever up to 38.4  °C. The patient appeared anxious and malnourished. Heart rate was regular at 86 bpm with blood pressure of 90/50 mmHg. Abdomen was soft, non-distended without peritoneal signs and there was no melena on rectal exam. Laboratory analysis was significant for leukocytosis (WBC = 14.4 × 103/μL with bandemia of 7%), severe anemia (Hgb = 6.7 g/dL) and renal insufficiency (Cr = 1.5 mg/dL). He was found to have a metabolic acidosis (pH = 7.33, Lactate = 9.0 mmol/L), elevated troponin-I (0.3 ng/mL) and nutritional depletion (albumin = 2.2 g/dL). Diagnostic work-up included an abdominal ultrasound which was negative for an abdominal aortic aneurysm or free peritoneal fluid. Chest X-ray was remarkable for pneumopericardium (Figure 1). Computed tomography (CT) of the chest demonstrated a large pneumopericardium (Figure 2) as well as pneumomediastinum, whose source was a possible fistula emanating from the upper GI tract below the diaphragm (Figure 3). Upper gastrointestinal endoscopy (performed without air insufflation secondary to risk of cardiac tamponade) confirmed a large, necrotic gastric ulcer emanating from the cardia with fistulization toward the pericardium. 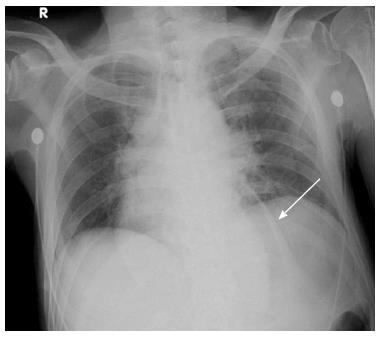 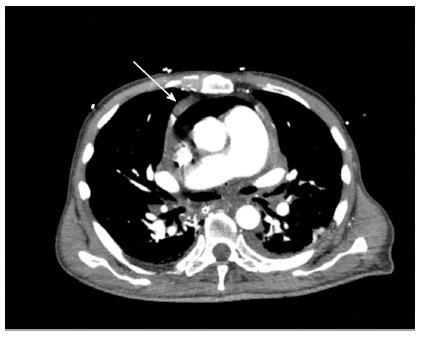 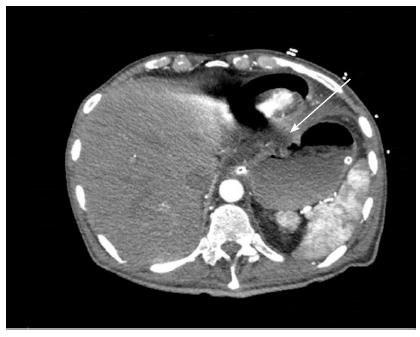 Figure 3 Computed tomography axial section at upper abdominal level revealing the presence of a gastric-pericardial fistula, as denoted by arrow.

After a short period of fluid resuscitation, the patient was brought to the operating room for an exploratory laparotomy. An inflammatory mass was found in the stomach remnant with evidence of fistulization via the diaphragm into the pericardium. A completion gastrectomy was performed with Roux-en-Y esophagojejunostomy and the pericardium was drained. The post-operative course was complicated by respiratory failure requiring percutaneous tracheostomy, as well as treatment for pneumonia and pulmonary embolus. Final pathology revealed a chronic gastric ulcer with extensive fibrosis and chronic inflammatory changes. On immunohistochemistry, multiple IgG4 positive plasma cells were scattered in the fibrous stroma with an IgG4:IgG ratio > 40%. Furthermore, serum IgG4 was elevated at 620 mg/dL [normal range (NR): 8-140 mg/dL] with total IgG 1350 mg/dL (NR: 680-1560 mg/dL). The patient was initiated on corticosteroid therapy and ultimately discharged to a rehabilitation facility. On clinical follow-up, the patient’s overall health improved significantly, with weight gain and return to his normal daily activities.

Stemming from a histopathological study of organs in patients with AIP, the pancreatic lesion was found to be a manifestation of a systemic process, notably a new clinicopathological entity known as IgG4-related disease[1]. It has since been described in multiple succeeding reports in nearly every organ system[1-9]. From epidemiologic studies, the majority of patients affected by IgG4-related disease are men over the age of 50, although the true prevalence of the disease is likely underestimated secondary to the lack of familiarity with this disease entity[12]. Indeed, the diagnosis of IgG4-related disease must be considered in the differential diagnosis where appropriate, as the clinical and radiographic characteristics may mimic neoplasm, resulting in unnecessary surgical resection[13]. In order to facilitate the diagnosis, a comprehensive set of clinical diagnostic criteria has been devised by the Ministry of Health, Labor, and Welfare of Japan: a characteristic diffuse or localized swelling or mass in single or multiple organs with elevated IgG4 serum levels, or distinctive pathological findings, notably tumefactive lesions with a dense lymphoplasmacytic infiltrate rich in IgG4-positive plasma cells and storiform fibrosis[12,13].

Gastric manifestations from this pathological basis are two-fold, either chronic ulceration or pseudotumor formation. Shinji et al[11] evaluated EGD findings in patients undergoing ERCP for obstructive jaundice. Compared to the control group, patients with AIP were more likely to have gastric ulcer (34.8% vs 13.5%, P = 0.007). In addition, the gastric ulcers in the AIP group were more likely to be located on the lesser curvature with linear appearance perpendicular to the incisura angularis.

Two recent reports have illustrated the potential for chronic gastric ulceration[14,15]. Fujita et al[14], describe a patient with a chronic gastric ulcer which failed to heal after standard treatment regimens including proton pump inhibitor therapy and H. pylori eradication. Biopsy revealed the presence of an intense infiltration of plasma cells containing IgG4, though the patient subsequently refused corticosteroid treatment. Similarly, Bateman et al[15], report a patient who underwent a partial gastrectomy for a chronic gastric ulcer due to concern for occult malignancy in which final pathology yielded the causative factor as IgG4-related disease.

With respect to pseudotumor formation, multiple reports have documented the etiology of IgG4-related disease with findings of either multiple gastric polyps[16], or more commonly solitary sclerosing nodular lesions of the stomach[17-19]. The diagnosis of IgG4-related disease in these cases was secured on final pathology after laparoscopic wedge resections[17,18] and endoscopic submucosal resection[19]. It is speculative whether these lesions would have responded completely to corticosteroid therapy had the causative factor been elucidated preoperatively.

In the current report, we describe a novel presentation of IgG4-related disease involving the stomach, notably a chronic gastric ulcer which fistulized to the pericardium requiring urgent operative management. The final pathology met diagnostic criteria for IgG4-related disease and elevated serum level of IgG4 was confirmatory. Given the increased recognition of this disease entity in the stomach, early diagnosis based on the typical clinical, serological and histological findings, followed by treatment with corticosteroid therapy may ameliorate gastric complications of IgG4 related-disease.

Authors report a case of a 65-year-old man diagnosed with an acute pneumopericardium secondary to a gastric-pericardial fistula, ultimately attributed to IgG4-related disease of the stomach.

The patient presented with 3 d history of intense interscapular and upper abdominal pain associated with fever.

Given the acute presentation in this case, an emergent gastrectomy was required, though the vast majority of IgG4-related disease is treated effectively by corticosteroid therapy.

IgG4-related disease is an increasingly recognized entity, requiring a high index of suspicion by the treating clinician to make the diagnosis based on typical clinical, serological and histological findings.

The authors present a novel case of IgG4-related disease of the stomach causing an acute gastric-pericardial fistula requiring surgical treatment, although the vast majority of chronic IgG4-related gastric ulcers will heal with corticosteroid therapy.