A 50-year-old female visited a local medical center with hemoptysis, cough and chest pain that had lasted for 3 d. Chest computed tomography (CT) was used to diagnose a mediastinal mass with invasion of the right middle lung and pleural thickening. She was transferred to our hospital and admitted to our emergency department. She had a history of daily alcohol intake equivalent to 1-2 bottles of hard liquor and she had suffered from recurrent acute pancreatitis and pseudocysts since 2008.

A chest radiograph on admission showed right lung field haziness subsequently eliminated as pneumonia. Chest CT (Figure 1) revealed mediastinitis with fat lysis due to pseudocyst rupture (black arrow), loculated effusion at the right anterior paramediastinal space (white arrow), pleural effusion (black arrowhead), and pneumonic infiltration of the paracardiac area (white arrowhead). A contrast study of the esophagus excluded the possibility of esophageal perforation. Biochemistry from a right thoracentesis revealed a highly elevated amylase level at 83495 IU/mL. These results suggested mediastinitis and loculated effusion of pancreatic etiology. To confirm the relationship between the pancreas and mediastinum, we performed magnetic resonance cholangiopancreatography (MRCP). MRCP showed an 8-mm pseudocyst at the pancreatic tail connected with the distal pancreatic duct (arrow). This pseudocyst communicated with another 2.6 cm pseudocyst in the right paraesophageal area. This second pseudocyst was connected with the mediastinum, as indicated by the arrowhead (Figure 2). 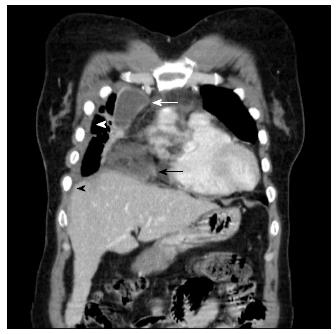 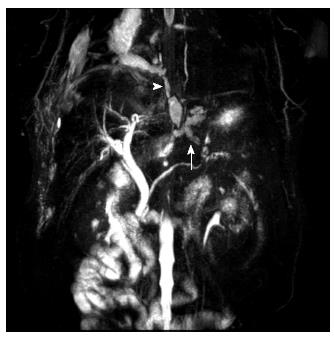 An abdominal CT scan did not reveal severe inflammation around the pancreas. We attempted to insert a pancreatic duct stent by endoscopic retrograde cholangiopancreatography (ERCP). However, due to severe stenosis in the middle pancreatic duct, we could not insert the stent into the pancreatic duct (Figure 3). We located a 5-Fr pig-tail catheter at the proximal pancreatic duct and tried conservative therapy with octreotide. However, the laboratory findings and symptoms of the patient did not improve. Ten days after ERCP, surgery was performed and the operative findings included severe adhesion due to chronic pancreatitis at the distal pancreas and stomach with fistula formation caused by severe adhesion and pseudocyst rupture. Adhesiolysis and fistula resection were performed (Figure 4). A follow-up chest CT scan after surgery showed complete recovery of the mediastinitis. The patient remained under observation in the outpatient department of our hospital. 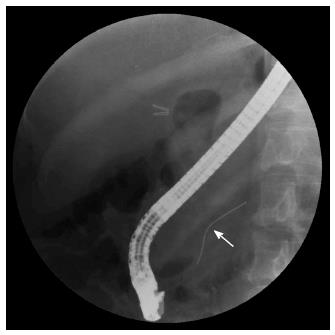 Figure 3 Endoscopic retrograde cholangiopancreatography of the patient. The white arrow indicates that the guide wire did not pass through the mid-pancreatic area. 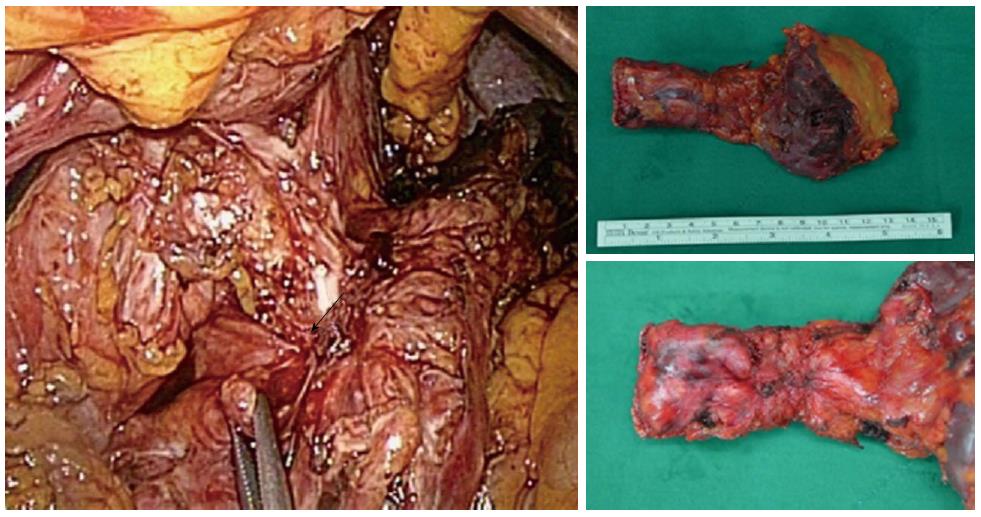 The general etiology of acute mediastinitis includes esophageal rupture and complications of thoracic operation, although bacterial infection of the oral and pharyngeal cavity may be rare causes that can lead to a fatal clinical course due to conditions such as septic shock[1-3]. Other reports describing mediastinitis secondary to pancreatitis have determined that it was accompanied by bacterial infection and the primary treatment was antibiotics with surgical drainage of the infected mediastinum[3,14]. In contrast, our patient had no abnormal findings on the esophagogram and no retrograde bacterial infection though the fistula tract. The patient suffered from chemical mediastinitis, rather than infectious mediastinitis, and the primary treatment was fistula resection instead of antibiotics.

The pathophysiology of this patient’s condition was similar to internal fistula. The fistulous tract passes either through the aortic or esophageal diaphragmatic orifices or directly through the diaphragm. If pancreatic duct disruption occurs anteriorly and is not walled off, a pancreatic-peritoneal fistula will develop, manifesting with ascites. If the disruption develops posteriorly, the pancreatic juice will flow into the retroperitoneal space and may dissect through the aortic or esophageal hiatus into the mediastinum to form a pleural fistula or present as a mediastinal pseudocyst, which ruptures into the pleural cavity and forms a pleural fistula[15].

In this case, chronic recurrent pancreatitis produced multiple pseudocysts that communicated with long fistula in a manner similar to a tunnel. We postulated that acute mediastinitis occurred because of continuous pancreatic juice leakage through the fistula. Most of the pancreaticopleural fistula patients are admitted to the hospital with respiratory symptoms since common complaints include dyspnea, chest pain, cough, sputum and fever[7]. Analysis of internal pancreatic fistula reports from 1990 to 2004 revealed that 84% of patients had a history of chronic alcoholic use, 74% had a past history of pancreatitis and 81% were male. The most common symptom was dyspnea, in 70% of patients. Other common complaints were chest pain and cough in 30% and 22% of patients, respectively[16]. Thus, before diagnosing a pancreatic form of the disease, patients might undergo respiratory testing, which could delay the diagnosis and contribute to the high mortality and morbidity.

Our case was a female who suffered from coughing with hemoptysis during the initial stage and she had nearly stopped drinking due to chronic pancreatitis. A chest imaging study showed a mass-like lesion at the mediastinum with pneumonia. Thus, the patient was admitted to the respiratory division and later transferred to the gastroenterology division. Thoracentesis and body fluid analysis are important in evaluating the etiology of this condition[3,5,7,8]. Pancreatic pleural effusion originating from pancreatitis can usually be identified by high levels of amylase, lipase, and albumin[15]. The patient in our cases did not have sufficient pleural effusion to suggest pancreatitis, although chest CT showed a specific loculated form of pleural effusion. Analysis of body fluids showed a high level of amylase indicative of mediastinitis with pleural effusion secondary to pancreatitis.

MRCP performed an important role in making a treatment decision in this case[17] because we recognized that the main pancreatic duct communicated with each pseudocyst to the mediastinum, which allowed identification of mediastinitis origin. We postulated that the pathophysiology of this mediastinitis was similar to pleural and peritoneal fistula.

The primary treatment for pancreaticopleural fistula is non-surgical drainage of pleural effusion, fasting, medications such as octreotide, and pancreatic duct stent insertion under ERCP. There are some reports that these types of therapies can result in a complete cure, although recurrence can occur in the presence of distal pancreatic duct stenosis or a failure of stent insertion. Two reports have determined that 62% and 69% of pancreaticopleural fistula patients require surgical treatment[16], and two cases of pancreaticopleural fistula in South Korea resulted in a full recovery after surgical intervention[7,8]. Surgical treatment can differ depending on location and visualization of the fistula. Generally, a pancreatic tail resection is performed when the fistula is located at the pancreatic tail. Pancraticojejunostomy can be performed when the fistula is at the pancreatic head or when there is proximal duct stenosis at the pancreatic head. The success rate of surgery was reported to be 80%-95%[16]. In this case, we initially attempted medical intervention; however, due to severe stenosis of the mid-portion of the pancreatic duct, we did not insert a guiding wire. After inserting the stent in the proximal pancreatic duct, we proceeded with medical therapy. However, serum amylase levels remained elevated and the patient’s symptoms did not improve, which led to surgical treatment. Following pancreatic tail and pancreatic-mediastinal fistula resection, follow-up chest and abdominal CT showed near-total recovery.

In conclusion, acute mediastinitis is a rare complication of pancreatitis. The primary indicators are respiratory symptoms such as hemoptysis and cough, which delay the diagnosis. In the absence of bacterial infection, physicians should consider stent insertion and conservative therapy as the primary treatment, although rapid progression of acute mediastinitis may require prompt surgical intervention when the response to medical treatment is not sufficient.

A 50-year-old female with respiratory symptoms such as hemoptysis and cough.

She presented decreased breath sound and crackles on auscultation of the right lung.

Magnetic resonance cholangiopancreatography revealed mediastinitis with fat lysis due to pancreatic mediastinal fistula that communicated with the distal pancreatic duct.

The cytologic examination of pleural effusion did not show malignant cells.

After failure of stent insertion under endoscopic retrograde cholangiopancreatography, adhesiolysis and fistula resection were performed.

This paper presents a rare case of acute mediastinitis that is a complication of pancreatitis with long pancreatic mediastinal fistula that needs surgical intervention.