Core tip: A very rare case of anaplastic carcinoma with remarkable intraductal tumor growth into the main pancreatic duct is reported. This case presented unique features and might help us to better understand the pathogenesis of this rare entity.

Anaplastic carcinoma of the pancreas is an aggressive tumor. The incidence of anaplastic carcinoma varies from 2.1% to 6.8% among reported case series[1-5]. It was first reported by Sommers and Meissner as pleomorphic carcinoma[6]. Pathologically, it is classified into spindle cell, giant cell and pleomorphic types. When detected, patients usually have huge tumors showing rapid growth, which are associated with a very poor prognosis. It usually presents as a large cystic pancreatic tumor with areas of hemorrhage and necrosis. En-bloc surgical resection is the only appropriate treatment for the tumors[5,7]. We herein report the clinicopathological features of a case of anaplastic carcinoma of the pancreas with remarkable intraductal tumor growth into the main pancreatic duct.

A 76-year-old male was admitted to our hospital for further investigation of a pancreatic tumor. He had received treatment for type 2 diabetes mellitus, essential hypertension and severe arteriosclerosis obliterans. He received ultrasonography as a screening examination, which showed a cystic tumor in the body and tail of the pancreas. He had no significant symptoms. The laboratory findings revealed that the serum carbohydrate antigen (CA19-9) was elevated to 57 U/mL, but the other tumor markers, carcinoembryonic antigen and DUPAN-II, were all within the normal ranges. Abdominal CT revealed a tumor measuring 6.0 cm × 3.5 cm in the body and tail of the pancreas. It consisted of a multilocular cystic component and a solid tumor in the lumen of the dilated main pancreatic duct (MPD) (Figure 1). No distant metastasis or lymph node swelling were detected. Endoscopic ultrasonography showed a heterogeneous hypoechoic tumor with a cystic component. On abdominal magnetic resonance imaging, the solid tumor presented with low intensity on T1-weighted images and relatively high intensity on T2-weighted images. MR cholangiopancreatography showed a segmental defect of the MPD by the solid tumor associated with the multilocular cystic lesion in the body and tail of the pancreas (Figure 2). Endoscopic retrograde cholangiopancreatography showed significant dilatation of the MPD from the body to the tail of the pancreas, and an elliptic filling defect in the MPD, suggesting the presence of an intraductal tumor in the lumen of the MPD (Figure 3A). Intraductal ultrasonography demonstrated a solid tumor filling the main pancreatic duct and a cystic lesion in the body of the pancreas (Figure 3B). The diagnosis of the exfoliative cytology was adenocarcinoma. We therefore diagnosed the tumor as an intraductal papillary mucinous neoplasm (IPMN) of the pancreas with obvious dilatation of the MPD. At laparotomy, the tumor had invaded into the transverse mesocolon, but dissemination and distant metastasis were not found. We performed distal pancreatectomy with splenectomy. We decided to make the transecting line of the pancreas by conforming it to the tumor extension using intra-operative ultrasonography. When we transected the pancreas, a reddish tumor protruded from the lumen of the MPD in the resected pancreas (Figure 4A). The main tumor, which replaced the body and tail of the pancreas, was dark reddish-brown and white on the surface, and had infiltrated into the adjacent MPD (Figure 4B). There was a papillary tumor associated with the main tumor in the lumen of the MPD. The MPD was significantly dilated by this protruded tumor. Hematoxylin and eosin staining showed that the part of the tumor presenting a white surface consisted of an adenocarcinoma (tub1, tub2) component, and the part of the tumor presenting the dark reddish-brown surface consisted of anaplastic carcinoma (giant cell type). The projecting tumor in the MPD was composed of anaplastic carcinoma (Figure 5). There was moderate dysplasia with no malignancy (pancreatic intraepithelial neoplasm-2) in the epithelium of dilated main pancreatic duct. The pathological diagnosis was a mixture of anaplastic carcinoma (giant cell type) and adenocarcinoma of the pancreas. The postoperative course was uneventful. The patient is now receiving chemotherapy because liver metastasis was detected 12 mo after surgery. 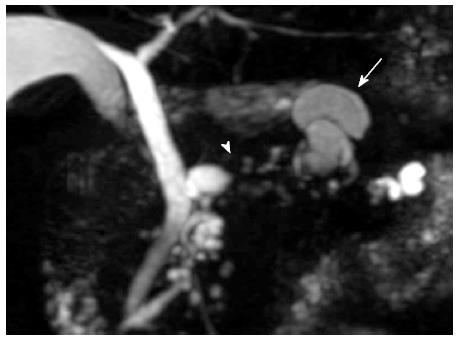 Figure 2 Magnetic resonance cholangiopancreatography revealed a segmental defect of the main pancreatic duct by the solid tumor (arrow head) associated with the multilocular cystic lesion (arrow) in the body and tail of the pancreas. 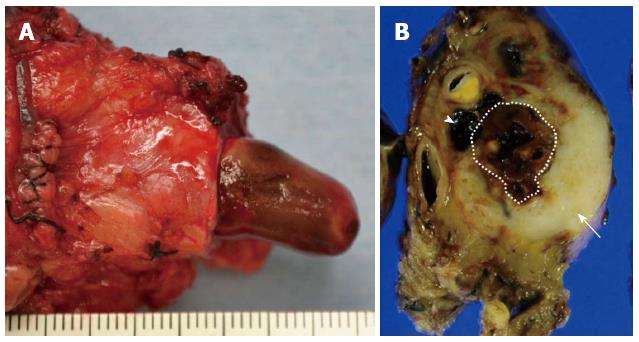 Figure 4 Pathological findings. A: The dilated main pancreatic duct was filled with a papillary projecting tumor; B: The main tumor was dark reddish-brown (arrow head) and white (arrow) on the surface, and showed significant dilatation of the main pancreatic duct (dotted line region). 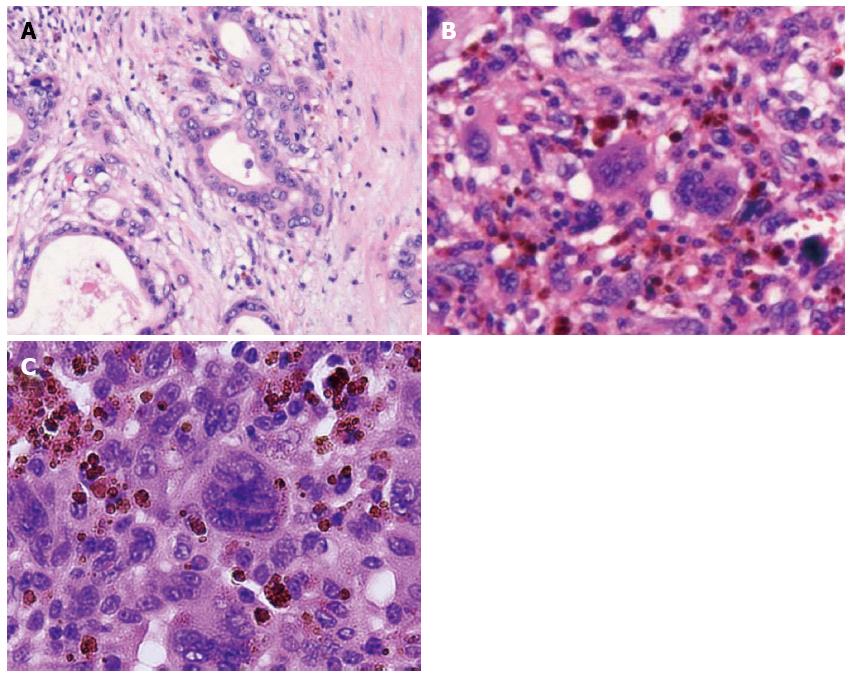 The clinical features of anaplastic carcinoma have been reported in the literature. The clinical symptoms induced by this tumor are non-specific, such as abdominal pain, fatigue, jaundice, body weight loss, anorexia and back pain[3], which resemble those induced by adenocarcinoma of the pancreas. In the imaging study, anaplastic carcinomas are usually detected as large, moderately hypervascular and exophytic tumors with large areas of necrosis[2].

The prognosis of anaplastic carcinoma of the pancreas is worse than that of poorly differentiated ductal adenocarcinoma of the pancreas[3,8,19]. Reyes et al[20] reported that the median survival time of pleomorphic giant cell carcinoma patients was three months. Strobel et al[4]suggested that the median duration of survival was significantly prolonged after R0/R1 resection, as compared with palliative surgery (7.1 mo vs 2.3 mo). We recommend that patients with anaplastic carcinomas of the pancreas should be offered pancreatic resection whenever possible. Due to its aggressive nature and ability to rapidly recur, the benefits of radiotherapy and chemotherapy have not yet been demonstrated[21,22]. Sporadic case reports have demonstrated a reduction of the tumor mass and prolongation of survival by treatments with 5-fluorouracil, gemcitabine, paclitaxel and radiation[23-25]. However, there is insufficient evidence to recommend any particular treatment, except for surgical resection.

In conclusion, we herein reported a very rare case of anaplastic carcinoma with remarkable intraductal tumor growth into the MPD. This case presented unique features and might help us to better understand the pathogenesis of this rare entity.

A 76-year-old male was admitted to our hospital for further investigation of a pancreatic tumor, but he had no significant symptoms.

This case was diagnosed as an intraductal papillary mucinous neoplasm of the pancreas.

Adenocarcinoma of pancreatic was mentioned in the differential diagnosis.

The laboratory findings revealed that the serum carbohydrate antigen was elevated to 57 U/mL, but the other tumor markers, carcinoembryonic antigen and DUPAN-II, were all within the normal ranges.

Computed tomography, endoscopic ultrasonography, magnetic resonance imaging, endoscopic retrograde cholangiopancreatography and intraductal ultrasonography showed significant dilatation of the main pancreatic duct (MPD) from the body to the tail of the pancreas, and an elliptic filling defect in the MPD.

Distal pancreatectomy with splenectomy was performed in this case.

Only 9 cases of anaplastic carcinoma with intraductal growth into the MPD, including our case, have been reported in the English literature.

Anaplastic carcinoma with intraductal growth into the MPD is rare.

Anaplastic carcinomas are highly malignant tumors, and the authors will follow up the patient closely and continuously.

This case presented unique features and might help us to better understand the pathogenesis of this rare entity.