Article-Type of This Article
Evidence-Based Medicine

METHODS: One hundred and twenty eight patients with chronic hepatitis C were examined using ARFI elastometry and APRI, calculated according to known formulae. The gold standard of liver biopsy was referred; ROC curve analysis was used to assess all ARFI and APRI values. The corresponding cut-off values, sensitivities, and specificities were calculated and compared. In addition, the correlation of liver fibrosis stages in chronic hepatitis C patients with ARFI measurements and APRI were also tested to evaluate significant data.

CONCLUSION: Both ARFI and APRI could evaluate liver fibrosis stages in chronic hepatitis C. ARFI is more accurate than the APRI index.

One hundred and twenty-eight patients with chronic hepatitis C, who were treated in our hospital from February 2011 to June 2013, were enrolled as the subjects. Patients with other types of hepatitis and liver cancer were excluded. All the subjects gave informed consent, and the ethics committee of our hospital approved the study. There were 86 males and 42 females, with an average age of 69.1 ± 4.7 years. The diagnostic standard of hepatitis C was based on the Viral Hepatitis Prevention and Treatment Programs, which were revised at the Xi’an Conference in 2000[12].

ARFI detection: The ARFI elastometry used in this study was a color Doppler ultrasound technique (Philips IU22) with a convex array probe. To avoid the influence of respiration and cardiac impulse, the right anterior lobe of the liver was detected while patients were in the lateral decubitus position, with the right upper limb elevated. During measurements with the probe in the vertical position, the patients were asked to hold their breath; pipeline structuring was avoided. The sampling depth was 3-4 cm from the body surface. The region of interest was set far away from the pipe and was continuously measured 8-9 times. The shear wave velocity and depth of sampling were recorded. The recorded liver stiffness index was the average value of the measurements.

Liver biopsy method: Liver biopsy was taken within 3 d after ARFI. Beforehand, hepatic function and routine blood tests were done. Liver samples were taken from the region of interest by a Bard Magnum biopsy gun, which was then sliced, stained and observed under a microscope. The Scheuer scheme was adopted as the pathological diagnosis standard. Generally, liver fibrosis is divided into five stages; S0, S1, S2, S3 and S4. S0: no fibrosis; S1: fibrotic portal regions, expanded local perisinusoidal and intralobular fibrosis; S2: fibrosis around portal regions, fibrous septum formation, and lobular structure preservation; S3: a lot of fibrous septum formation and lobular structure disorder without cirrhosis; and S4: early period of cirrhosis[13].

APRI index determination: An automatic biochemistry analyzer and an automated hematology analyzer detected the AST and PLT levels just before, or one day before, the liver biopsy. APRI = AST (ULN)/PLT (109/L)[14].

Table 1 shows the comparison of ARFI measurements and APRI in different stages of liver fibrosis of patients with chronic hepatitis C. The results showed that the ARFI and APRI values significantly increased with increasing liver fibrosis; the differences were statistically significant (P < 0.05).

In patients with chronic hepatitis C, ARFI and APRI values were positively correlated with liver fibrosis stage. Both showed increasing trends with increased degree of fibrosis. The Spearman correlation coefficients were 0.649 (P = 0.001) for ARFI and 0.478 (P = 0.001) for APRI (Figure 2).

The comparison of diagnostic parameters, such as diagnostic threshold, sensitivity and specificity of ARFI and APRI at different stages of liver fibrosis is shown in Table 2. The ROC curves of different stages are shown in Figure 3. The area under the ROC curve was used to evaluate different degrees of liver fibrosis in patients with hepatitis C. The results showed that in stages ≥ S2, ≥ S3, and = S4; all ARFI values were greater than the corresponding APRI value, indicating that ARFI had a higher credibility rating in detecting liver fibrosis than APRI. The highest value of the ROC curve (0.901) was in the ARFI detection at stage ≥ S3. 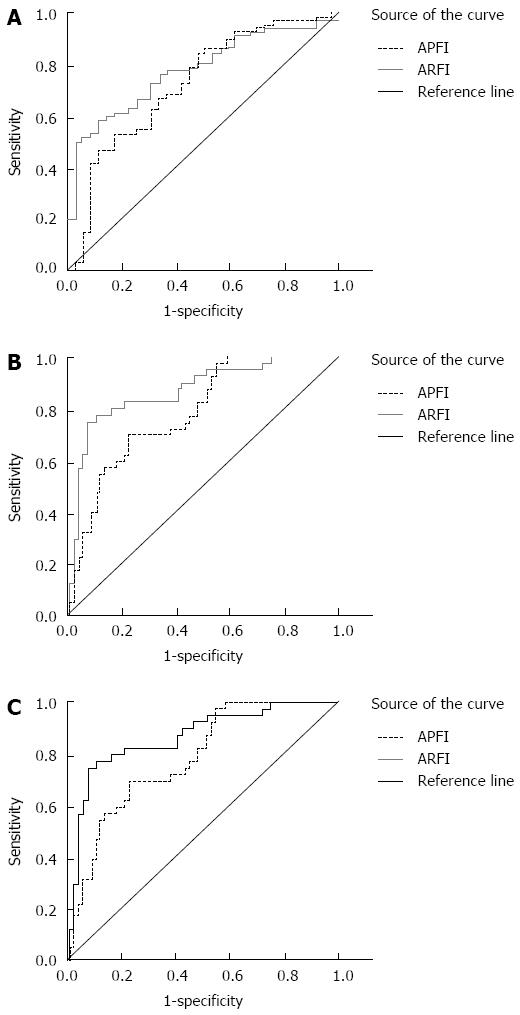 This study used ARFI and APRI models to detect and analyze the degree of liver fibrosis in 128 patients with hepatitis C. The test results of these two methods were assessed and compared to determine their accuracy. Their clinical significance in evaluating liver fibrosis stages of patients with chronic hepatitis C was also determined. The findings of the present study should initiate and promote the use of these noninvasive methods as new tools for quick detection and treatment of patients with chronic hepatitis C.

The incidence of chronic hepatitis C has been increasing gradually, and is a potentially deadly threat to people’s health. Sustained and repeated inflammatory stimuli can cause a stress repair response in the body, leading to the accumulation of a large number of extracellular matrixes in the liver tissue, with accompanying fibrosis hyperplasia[15-19]. Untimely and ineffective degradation of fibrosis can cause cirrhosis or even liver cancer. Therefore, early diagnosis is important for the timely prevention and treatment of liver fibrosis and cirrhosis. Currently, liver biopsy is the main diagnostic method for liver fibrosis. However, it is an invasive method and associated complications limit its safe use[20].

Liver fibrosis assessment was evaluated based on two facts; (1) liver stiffness is caused by fibrosis; and (2) Elastrography - an objective and reliable technique to measure hepatic tissue elasticity[21-24]. Castera et al[25] used transient elastography technology and reported that chronic hepatitis C significantly correlated with the stages of liver fibrosis. However, the disadvantages of early transient elastography findings were their instability and inaccuracy. These disadvantages were influenced by certain factors during assessment, e.g., obesity, width of the intercostal space and ascites. It may also limit the use of elastography in evaluating the degrees of liver fibrosis of patients with hepatitis C[26,27]. ARFI is a new noninvasive real-time dynamic ultrasound imaging technology for evaluating liver tissue elasticity. It can measure the degree of liver fibrosis by detecting and evaluating stages of liver stiffness[22,23,28]. As a complement to ARFI technology, various mathematical modalities for assessing liver fibrosis objectively have ben developed in recent years, such as the AAR index, the APRI and the Shata index. The APRI is a mathematical technique to assess the degree of liver fibrosis. Its advantage is that only two simple biochemical markers (AST and PLT) are used. Therefore, the APRI is receiving more attention as a non-invasive diagnostic tool[15,29,30].

In this study, the degrees of liver fibrosis of patients with chronic hepatitis C were positively correlated with ARFI and APRI values (Spearman correlation coefficients were 0.649 and 0.478, all P < 0.05). Furthermore, a correlation coefficient analysis showed that the correlation between ARFI measurements and the stages of liver fibrosis was better than that of the APRI. The difference may reflect the basic principle of these methods. The theory of ARFI is to emit low-frequency pulse shear waves via the convex array probe. The elastic modulus of the underlying tissue is obtained by longitudinal focal compression and lateral displacement, which are produced by the high frame rate of ultrasonic imaging. The state of elasticity of the liver tissue can be measured without any external pressure[31]. APRI index is calculated using determined AST and PLT levels. AST is easily influenced by liver protection and immuno-enhancement activities, which cannot reflect the real content. Therefore, correlations between the APRI and the stages of liver fibrosis are less accurate than the ARFI.

The present study suggested that 1.779 m/s can be used as an ARFI diagnostic threshold to diagnose severe liver fibrosis (S3-S4). Patients with < 1.779 m/s real-time hepatic tissue elasticity had lower grades of fibrosis; therefore, liver biopsy was temporarily postponed for close monitoring, which could help the patients avoid early biopsy and associated complications. In performing an ARFI elastometry, the patient’s respiration and shear-wave measurements, near large vessels, might be unsuccessful because of subcutaneous fat thickness, which can be avoided by careful and professional handling.

In conclusion, both ARFI and APRI could evaluate the degree of liver fibrosis objectively. ARFI measurements were more accurate and provided quantitative values to assess the real time hepatic tissue elasticity states (liver fibrosis stages) for patients with chronic hepatitis C, compared with the APRI. These preliminary findings could be used as an important reference for clinical investigations on noninvasive modalities for diagnosing liver fibrosis stages in patients with chronic hepatitis C.

The degree of liver fibrosis caused by chronic hepatitis C is an important factor affecting the treatment and prognosis of patients with liver diseases. Therefore, quantitative assessment of the stage and grading of liver fibrosis is very important.

This study attempted to develop practical guidance for diagnostic purposes.