METHODS: A retrospective study of patients treated for CD was performed. CD was defined on computed tomography by the presence of a localized abscess, pelvic abscess or extraluminal air. For follow-up, patients were contacted by telephone. Numbers of elective surgeries, recurrences and abdominal pain were analyzed.

RESULTS: A total of 114 patients (median age 57 years (range 29-97)), were admitted for CD. Nine patients required surgical intervention for failure of conservative therapy (Hartmann’s procedure: n = 6; resection and colorectal anastomosis: n = 3). Of the 105 remaining patients, 24 (22.9%) underwent elective sigmoid resection. The 81 (71%) non-operated patients were all contacted after a median follow-up of 32 mo (4-63). Among them, six had developed a recurrent episode of diverticulitis at a median follow-up of 12 mo (6-36); however, no patient required hospitalization. Sixty-eight patients (84%) were asymptomatic and 13 (16%) had recurrent abdominal pain.

CONCLUSION: Conservative policy is feasible and safe in 71% of cases, with a low medium-term recurrence risk.

Core tip: We sought to determine whether a conservative approach to the sigmoid colon could be proposed after complicated diverticulitis. One hundred and fourteen patients were included in this study, which confirmed that the conservative approach is feasible in 71% of cases after an episode of complicated diverticulitis (CD). Indications for elective sigmoid resection should not be based solely on CD episode. This approach not only has an impact for the patient, but also for the health care system.

Diverticular disease is a common gastrointestinal disorder, found in a third of people over the age of 60 years in the Western world[1]. It is thought to be caused by the low fiber diet in developed countries and affects the sigmoid colon in 90% of cases[2].

Lifetime prevalence of diverticulitis is 10%-25% among patients with diverticular disease, and is increasing[1,3].

In 2006, the American Society of Colon and Rectum Surgeons revised its practice parameters for sigmoid diverticulitis, and stated that “elective colon resection should typically be advised if an episode of complicated diverticulitis is treated nonoperatively”[7].

Conversely, some authors reported management using a conservative policy. Myers et al[8] reported 92 patients with Hinchey III peritonitis managed by laparoscopic peritoneal lavage only. Of these patients, only two re-presented with diverticulitis at a median follow-up of 36 mo (range 12-84). Recently, Gaertner et al[9] reported 32 patients that received percutaneous drainage of diverticular abscess without subsequent colectomy, with a recurrence-free survival of 58% at 7.4 years.

We performed a retrospective study of patients admitted between January 2008 and December 2012 for CD managed by conservative approach.

CT-guided percutaneous drainage was performed if clinical and biological parameters had not improved with antibiotics and if the radiologist considered the procedure safe.

Initial response to therapy was assessed in an inpatient setting and included the following criteria: improvement in abdominal pain and tenderness, normal vital signs (blood pressure, heart rate, respiratory rate and fever), normalization of leukocytosis and C-reactive protein, and return of antegrade GI function while tolerating an oral diet.

Treatment failure was defined as the need for emergency surgery or mortality. Radiologically guided drainage of intra-abdominal abscess(es) and recurrent symptoms were not considered as treatment failure. Recurrence was defined as recurrence of symptoms more than 30 d after discharge. The patient selection procedure is summarized in Figure 1. Patients were followed up 6 wk later with a colonoscopy. Indication for subsequent colectomy was left to the discretion of the surgeon in charge. In May 2013, patients (or the family physician) managed nonoperatively were contacted by telephone. The numbers of elective surgeries, recurrences and abdominal pain were analyzed. 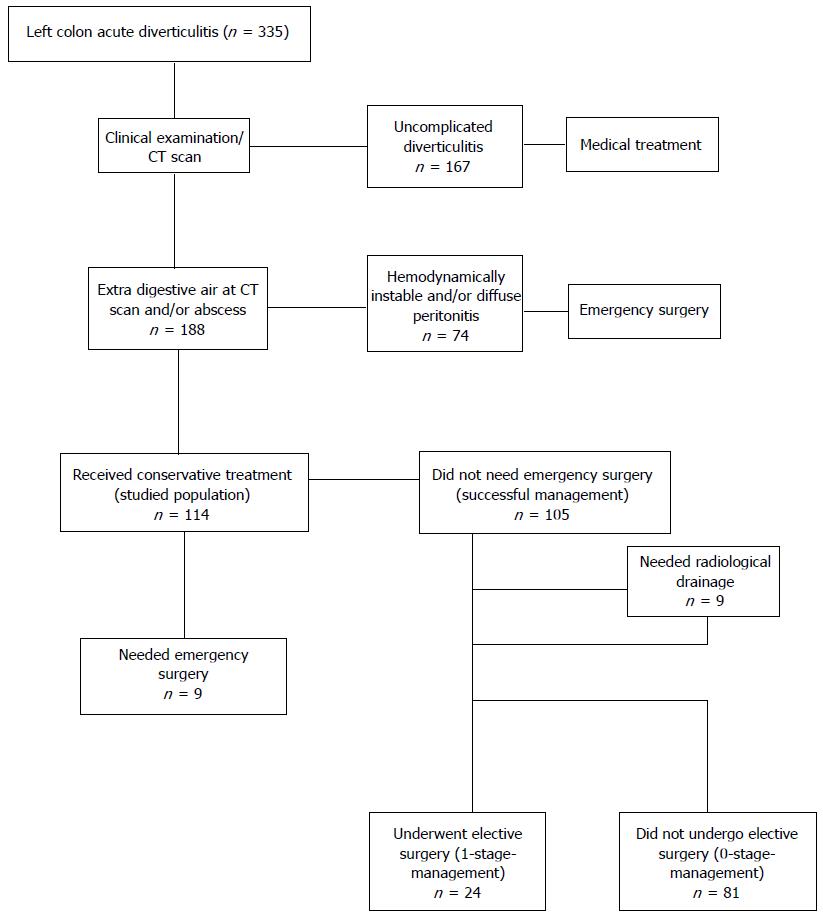 Continuous data were presented either as median (min.-max.) or mean (± SD). Considering the small number of patients per group, multivariate analysis and logistic regression to assess any relative risk could not be performed. A P value ≤ 0.05 was considered significant. Statistical analyses were performed using SPSS 13.0 (SPSS, Inc., Chicago, IL, United States).

During the study period, 335 patients were admitted to our department with acute diverticulitis (Figure 1).

Seventy-four patients were excluded who underwent immediate surgery because of hemodynamic instability and/or generalized peritonitis. The remaining 114 patients were hemodynamically stable and had CT evidence of extra digestive air and/or abscess without any extra digestive stools/liquid; they constituted the studied population [median age: 57 years (range 29-97); 49 female (43%)].

Sixty-three patients had evidence of a mesocolic abscess (in 52 cases) or a pelvic abscess (in 11 cases) (Table 3). In 48 cases, the abscess was the only extracolic anomaly on the CT. Nine patients had percutaneous drainage of a large abscess (Table 4), one of whom required subsequent operation.

Of the 105 patients who were discharged without resection, 20 subsequently underwent elective sigmoid resection in our department and four in another hospital (Table 6). Median interval until elective sigmoid resection was 5 mo (range, 2-9) and no patient underwent emergency surgery. Indications for surgery were: persisting symptoms for four patients, recurrent and disabling bouts of diverticulitis for three patients, fistula for three patients (coloenteric, colovesical and colovaginal), sigmoid stenosis for one patient, portal venous pneumatosis for one patient, immunodeficiency for one patient, and surgeon decision for 11 patients (colonic resection to prevent further attacks, or complicated disease).

According to our policy, all patients underwent medical examination and colonoscopy systematically 6 wk after discharge and none of them showed colic adenocarcinoma.

In total, 81 patients (71%) were managed only with medical treatment. These 81 non-operated patients (or the family physician) were all contacted after a median follow-up of 32 mo (range, 4-63). Four patients died during follow-up, but cause of death was not related to diverticular disease. Six patients (7%) developed a recurrent episode of diverticulitis with a median follow-up of 12 mo (range, 6-36); however, none of these patients required hospitalization. At the end of follow-up, 68 patients (84%) were completely asymptomatic and 13 (16%) had recurrent abdominal pain.

In univariate analysis, the only factor associated with elective sigmoid resection following successful nonoperative management was the period of the episode [2008-2009 (n = 16) vs 2010-2012 (n = 8), P = 0.006]. Age less than 50 years, free air or abscess on CT were not associated with need for elective surgery.

In our study, nonoperative treatment with intravenous antibiotics, associated with CT-guided percutaneous drainage in selected patients, has enabled us to avoid surgery in 71% of cases.

Although clinical presentation of sigmoid diverticulitis as abscess has increased in recent years[11], questions remain concerning the therapeutic strategies in an acute setting and after successful conservative treatment[8,12-14].

It is generally acknowledged that elective resection should be performed after complicated acute diverticulitis to avoid the high risk of recurrence and further complications[15-17]. However, recent studies have highlighted the fact that an episode of severe diverticulitis may result in a buttressing effect around the affected portion of the colon, thereby protecting it from subsequent attacks[18].

In our study, only 10% of patients had previously been admitted for diverticular disease. Furthermore, of the 85 patients who did not undergo elective surgery, but who continued successful nonoperative treatment, only six had recurrence. This rate is consistent with the 7%-25% reported previously after conservative management of uncomplicated diverticulitis[21].

The decision to operate must also take into account operative morbidity and mortality associated with elective colectomy and its effectiveness in preventing recurrence. Prophylactic colectomy is not without risk. Surgery for elective diverticular resection has been associated with a mortality risk of up to 4% and with morbidity rates of 25%-55%, including a 10%-14% incidence of stoma formation[22-25].

Moreover, elective resection is not curative in all patients, with recurrence rates following surgery estimated at 2.6%-10.4%[26-30]: a large number of patients report impairment in bowel function[28,31,32].

Ambrosetti et al[33] conducted a study of 73 cases of diverticular abscesses with 43-mo of follow-up. They found that 58% of patients with a mesocolic abscess who had received successful nonoperative treatment during their first hospitalization did not require operative treatment, vs 47% of patients with a pelvic abscess. The authors concluded that a mesocolic abscess by itself is not an absolute indication for colectomy.

Dharmarajan et al[12] showed that 93% (25 of 27) of their acute diverticulitis patients who presented with stable examination results, and distant free air on computed tomography, were successfully managed without urgent surgery, with 37% of these patients receiving percutaneous drains. Costi et al[34] reported a 92.3% (36 of 39) success rate for nonoperative management in patients with diverticulitis and a pneumoperitoneum, excluding those with hemodynamic instability and/or diffuse extravasation of rectal contrast on computed tomography.

The limitations of our study are its relatively short follow-up and retrospective nature. Furthermore, multiple individual surgeons managed patients, and selection criteria for nonoperative management were not standardized. Our univariate analysis shows that the risk of elective colectomy decreased after 2010, probably reflecting the time required for surgeons from our department to take ownership of this new concept.

However, these data still provide a valuable insight into the natural history of complicated diverticular disease, and might be considered preliminary to a future, multicenter prospective trial to better define target groups for prophylactic resection in this very prevalent and pervasive disease.

In our opinion, the decision to proceed to elective laparoscopic colectomy should not be automatic, but should taken on a case-by-case basis. Transplant patients, immunocompromised patients, or patients who need treatment that increases the risk of perforation (NSAID, steroids etc.), may be proposed for prophylactic sigmoid resection[35], even if the benefit of this approach has not been demonstrated[36,37].

Elective surgery for diverticular disease is intended to treat complications (fistula and symptomatic stenosis) or rare patients with recurrent and disabling bouts of diverticulitis.

A conservative policy is both feasible and safe in 71% of cases, with a low short-term recurrence risk.

We propose that after a complicated episode of diverticulitis treated nonoperatively, elective colectomy should be offered to treat complications (fistula and symptomatic stenosis), or for rare patients with recurrent and disabling bouts of diverticulitis. This attitude warrants further confirmation with larger cohorts.

We are grateful to Nikki Sabourin-Gibbs, Rouen University Hospital, for reviewing the manuscript’s English.

Although sigmoid complicated diverticulitis has increased in recent years, questions remain concerning the therapeutic strategies in an acute setting, and after conservative treatment has been successful.

It is generally acknowledged that elective resection should be performed after complicated acute diverticulitis to avoid the high risk of recurrence and further complications. However, recent studies have highlighted the fact that an episode of severe diverticulitis may result in a buttressing effect around the affected portion of the colon, thereby protecting it from subsequent attacks.

The authors report the outcomes of 114 patients admitted for complicated diverticulitis (Hinchey I or II and/or extraluminal air). Of these 114 patients, 81 were managed by medical treatment only. After a median follow-up of 32 mo (4-63), six patients (7%) had developed a recurrent episode of diverticulitis at a median follow-up of 12 mo (6-36), but no patient required hospitalization. Of the 81 patients managed nonoperatively, 68 (84%) were asymptomatic and 13 (16%) had recurrent abdominal pain.

This study results suggested that a conservative approach is feasible in 71% of cases after an episode of complicated diverticulitis (CD). Indications for elective sigmoid resection should not be based solely on CD episode. This approach has an impact not only for the patient, but also for society.

This study shows that in patients with complicated acute diverticulitis, conservative management is a “possible” approach in over 70% of cases. This is an encouraging result based on a retrospective design that could lead to superselection of patients with the best prognosis.