Core tip: We conclude that a correct clinical history and imaging interpretation will enable us to diagnose intestinal anisakiasis correctly and successfully manage patients with conservative measures, avoiding unnecessary surgery.

Patients with perforations or strangulation of the intestine require surgical therapy, but conservative therapy is the basic treatment of anisakiasis. Cases of non-gastric anisakiasis are not only very rare, but are also difficult to diagnose because the small intestine is an inaccessible zone for endoscopy. Thus, the diagnostic procedure required for anisakiasis, which is to detect the whole worm, is not feasible. As a result, patients with intestinal anisakiasis, have been diagnosed with acute abdominal or intestinal obstructions preoperatively, and have undergone unnecessary surgical operations[5-10]. We herein describe three cases of intestinal anisakiasis, which were correctly diagnosed clinically and treated successfully with conservative therapy.

A 62-year-old man presented to the ER of our hospital because of abdominal pain that started abruptly. He was diagnosed with urinary tract stone, and a pain killer was prescribed. The abdominal pain was not relieved, and thus, he presented to our hospital the following day. He had a past history of hypertension, for which he was still being treated. He was a heavy smoker, and enjoyed alcohol with fresh sashimi everyday.

The patient was alert and his vital signs, except for his blood pressure (177/87 mmHg), were normal. On physical examination, tenderness with rebound tenderness and rigidity were revealed in the lower part of the abdomen. Laboratory examination was normal, except for a slight increase in C-reactive protein (CRP) levels (0.78 mg/dL) (Table 1). Abdominal X-ray showed gaseous dilatation of the small intestine (Figure 1A). An abdominal computed tomography (CT) scan demonstrated swelling of the partial segment of the small bowel and dilatation of the intestine with fluid collection on the oral side of the lesion (Figure 1B). No ascites was detected.

Figure 1 Abdominal X-ray (A) and computed tomography scan (B).

The patient was admitted to our hospital, and conservative therapy was started after a gastric tube was inserted into his stomach. On the second hospital day, the patient had to rely on pain-killers to control the abdominal pain. Therefore, he underwent another abdominal CT, that demonstrated ascites collection, in addition to the worsening of the observations from the first day (Figure 2A). By then, we had learned that the patient had raw fish (katsuo) 2 d before hospital admission. Therefore, we performed an anti-Anisakis IgG/A antibody test. Although imaging findings were worse, his vital signs were stable, which was another reason why we strongly suspected that the disease was intestinal anisakiasis and did not perform an emergency operation. 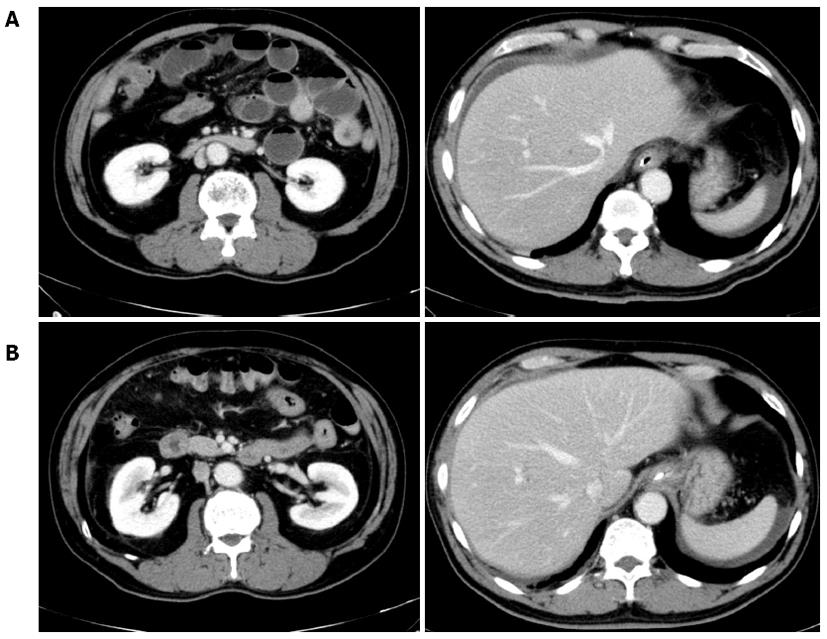 Figure 2 Abdominal computed tomography scan. A: Showing swelling of the partial segment of the small bowel and dilatation of the intestine (upper left) and ascites around liver and spleen (upper right); B: Demonstrating improvement in the partial swelling of the small bowel and the dilatation of the intestine and ascites collection.

On the third hospital day, the abdominal symptoms were relieved, and an abdominal CT scan demonstrated a reduction in ascites (Figure 2B). On the fourth day, the gastric tube was removed and an oral diet was started. The serum titer of anti-Anisakis antibody was 1.68 (normal range < 1.50), and the patient was formally diagnosed with intestinal anisakiasis. No signs of the recurrence of the abdominal symptoms were observed, and the patient was discharged on the tenth hospital day.

A 38-year-old male experienced abdominal pain that started abruptly. The abdominal pain was not relieved after the intake of an antacid. Therefore, he presented to the ER of our hospital. The patient had no particular past medical and family history. He had smoked 20 cigarettes/d for the past 18 years, and was a regular drinker.

The patient was alert and his vital signs were normal. On physical examination, tenderness was revealed in the upper abdomen. Laboratory examinations were normal except for a slight increase in white blood cells (WBC, 15460 cells/μL; Table 1). Abdominal X-ray showed gaseous dilatation of the small intestine (Figure 3A). An abdominal CT scan demonstrated swelling of the partial segment of the small bowel and dilatation of the intestine with fluid collection on the oral side of the lesion (Figure 3B). A slight amount of ascites was detected in the Douglas pouch. 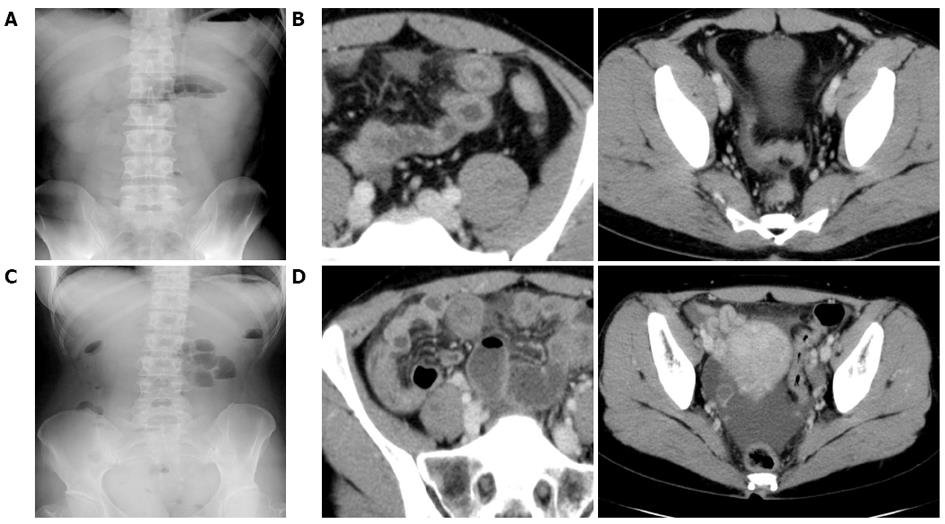 The patient was admitted to our hospital, and conservative therapy was started. He had taken fresh ika the day before the symptoms developed, and the anti-Anisakis IgG/A antibody titer was 1.88 (normal range < 1.50). On the second hospital day, his abdominal pain had been relieved quite a lot. An oral diet was started from the third day, and he was discharged on the sixth hospital day, confirming no recurrence of the abdominal symptoms.

A 47-year-old woman experienced an abdominal pain that started abruptly. The intermittent abdominal pain that was felt every 5-10 min was not relieved after the intake of a non-prescription drug. Thus, she presented to the ER of our hospital. The patient had acute hepatitis A 10 years ago. She neither drank nor smoked.

The patient was alert and her vital signs were normal. On physical examination, tenderness was revealed in the right side of the abdomen. Laboratory examinations were normal except for a slight increase in WBC (11080 cells/μL), and CRP levels (2.52 mg/dL) (Table 1). Abdominal X-ray (Figure 3C) and an abdominal CT scan (Figure 3D) demonstrated findings that were similar to those of the other two cases.

The patient was admitted to our hospital, and conservative therapy was started after a gastric tube was inserted into her stomach. She had taken fresh katsuo 2 d before she had the symptoms, and the anti-Anisakis IgG/A antibody titer was 1.91 (normal range < 1.50). On the second hospital day, the abdominal pain was relieved. On the third day, the gastric tube was removed, and an oral diet was started from the fifth day. She was discharged on the ninth hospital day, confirming no recurrence of the abdominal symptoms

The adult anisakis lives in the intestine of marine mammals, such as whales and dolphins. The eggs that they lay, come out and spread in the ocean when these mammals defecate. L2 larvae hatch out-of the eggs and swim freely in the water. These larvae are ingested by crustaceans in which, they mature into L3 larvae. These crustaceans are eaten by fish and squid, which are finally eaten by humans and marine mammals. For those that are eaten by marine mammals, the larvae molt and mature into the adult worms, which lay eggs and enter into the life cycle again. Larvae eaten by humans cause anisakiasis.

Anisakiasis was first reported by Van Thiel et al[11] Since then, many cases have been reported in different parts of the world. Because of the tradition of eating raw fish (sushi and sashimi) in Japan, the incidence of anisakiasis is higher than that in other countries (2000-3000 cases per year according to the Ministry of Labor, Health, and Social Welfare).

The most common symptom of anisakiasis is severe abdominal pain, for which the patient often requires painkillers, as observed in case 1. Anisakiasis is diagnosed by the detection of the worm sticking to the gut wall. However, as far as intestinal anisakiasis is concerned, diagnosis is difficult because the small intestine is an inaccessible zone for endoscopy, although capsule endoscopy or double balloon endoscopy can be performed in a very few institutions. The only method for diagnosing anisakiasis, other than endoscopy, is immunological examination (e.g., by examining Anisakis-specific IgA, IgG, and IgE). The sensitivity is as high as 70%-80%[12,13], but the results take time (a week) and, therefore are not at all helpful in the clinical field.

Because abdominal pain is severe and abrupt and the findings of clinical imaging are very remarkable, intestinal anisakiasis is often misdiagnosed as acute abdomen or intestinal obstruction and is treated surgically. According to the report by Ishikura et al[14] intestinal anisakiasis was correctly diagnosed postoperatively in only 23% cases, whereas 38% cases were acute appendicitis, 12% were intestinal obstructions and 10% were acute celiopathy. Anisakis larvae survive only for a few days in the intestinal tract of humans. Therefore, the symptoms due to acute inflammation subside within 2-3 wk and are treated well by conservative therapy[15]. However, there have been cases of strangulation or severe long segmental stenosis of the intestine caused by Anisakis, which of course required surgical therapy[10,16]. However, there are cases involving acute abdominal pain that are not intestinal anisakiasis. They should be correctly diagnosed and treated surgically.

Collecting correct details of clinical history is the first step required for the correct diagnosis of intestinal anisakiasis. The onset of intestinal anisakiasis varies from 1-7 d after the ingestion of the raw fish and differs from that of gastric anisakiasis, which develops symptoms a few hours after the ingestion of raw fish[1,17]. However, there are cases in which the patients forget the food they ate, and thus, we should be very careful in collecting their clinical history details.

Accurate reading of the findings of the clinical images is the second step that is required for making a correct diagnosis of intestinal anisakiasis. CT shows swelling of a partial segment of the small bowel, dilatation of the intestine with fluid collection on the oral side of the lesion, and collection of ascites, as observed in all three cases experienced[8,10,18]. Ultrasound shows marked local edema of Kerckring’s fold, which is known as the corn sign, dilatation of the oral portion of the small intestine with fluid accumulation, and accumulation of ascites. We did not use ultrasound during the diagnostic procedure in our cases, but integrating the information from different modalities of images would certainly increase the rate of correct diagnosis.