AIM: To evaluate the incidence of late biliary complications in non-resectable alveolar echinococcosis (AE) under long-term chemotherapy with benzimidazoles.

Human alveolar echinococcosis (AE) is caused by the larval stage of the fox tapeworm, Echinococcus multilocularis. The parasites’ dominant definitive host is the red fox, which can be infected in up to 60%[1]. Echinococcus multilocularis is widely distributed throughout the Northern Hemisphere, with a disease-endemic area stretching from North America through central Europe (eastern France, southern Germany, Switzerland and western Austria) to central and east Asia[2,3]. AE remains a rare disease in Western Europe, but not in highly endemic regions such as Sibiria and China, where a human prevalence rate of 3% or higher has been described[4].

In early untreated cohorts, the fatality rate exceeded 90% within 10 years[5]. However, survival rates have improved tremendously within the last three decades due to the increasing success of several treatment options, including surgery as the preferred first line therapy[6], long-term chemotherapy with benzimidazoles (available since 1975[7]), interventional procedures, and in rare cases liver transplantation[8]. As a result, the life expectancy for a middle aged patient with AE has increased by approximately 20 years and is now only slightly reduced (by about 3 years) compared to healthy controls[7]. However, if complete surgical resection of the parasite is not possible, long-term (life-long) chemotherapy with benzimidazoles remains the standard of care[6], and AE continues to be a disease with significant morbidity and mortality.

In unresected AE, biliary complications can influence the course of the disease significantly. The intrahepatic bile ducts or the extrahepatic biliary tree can either be directly infiltrated and destroyed by the growing parasite or compressed due to surrounding growth. Biliary (and other) complications include cholangitis, liver abscess, septic shock, portal hypertension and biliary cirrhosis[9]. Detailed knowledge of biliary complications is crucial for the management of patients with non-resectable AE.

Currently, our knowledge of adverse effects in AE is very limited. There are case series describing biliary complications of cystic hydatid disease (caused by Echinococcus granulosus). In these publications, bile duct obstruction with liver atrophy in the cyst-bearing lobes[10], rupture of hepatic hydatid cysts in the biliary tree with secondary cholangitis[11] or biliary obstruction by daughter cysts with further complications such as portal hypertension, ascites, abscesses and the development of bronchobiliary fistulas have been described[12,13]. However, these data are not directly applicable to alveolar hydatid disease (AE; caused by Echinococcus multilocularis) which is much more frequent in central Europe. We aimed to evaluate late biliary complications in a cohort of patients with non-resectable AE.

From the prospective database of the Swiss National Center for Echinococcosis, we retrospectively analysed all available data of AE patients followed at the University Hospital of Zurich with a diagnosis of AE before 2003. The detailed study protocol has been published earlier[14]. The study was performed according to the declaration of Helsinki and the protocol was approved by the hospital ethics committee. All patients provided written informed consent to participate in the study. Patients were examined at yearly intervals, including a physical examination, routine laboratory tests, and additional immunodiagnostic tests, a chest radiograph, ultrasonography, and CT scan of the abdomen according to the study protocol. Further magnetic resonance imaging of the upper abdomen was performed in unclear cases.

The patient selection process as described above is illustrated in Figure 1. All patients in Zurich with a diagnosis of AE between 1967 and 2003 were included (n = 148). Fifty-four patients with successful R0 resection were excluded. A total of 94 patients had non-resectable or recurrent AE and received continuous long-term chemotherapy with benzimidazole carbamates (either mebendazole or albendazole). Of the 94 non-resectable AE patients, 26 patients developed late biliary complications as diagnosed by imaging [endoscopic retrograde cholangiopancreaticography (ERCP), computed tomography scan (CT), magnetic resonance cholangiopancreaticography (MRCP)] and blood tests. Liver biopsies were not routinely performed in these patients to find biliary cirrhosis. 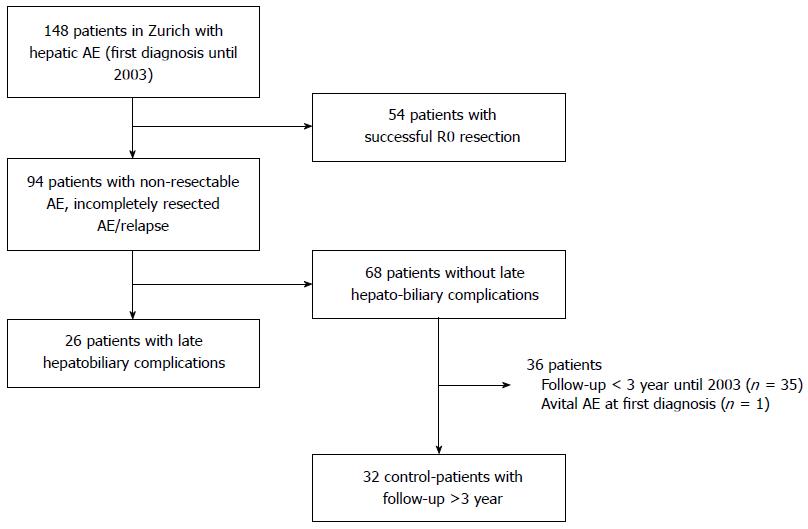 Late biliary complications were defined as biliary disease occurring at least 3 years after initial diagnosis of AE. The following were assessed: (1) Sclerosing cholangitis-like lesions, defined as abnormal ERCP or MRCP findings with features resembling those of primary sclerosing cholangitis such as multilocular annular strictures within the intrahepatic and/or extrahepatic bile ducts with alternating normal or slightly dilated segments; (2) Stenosis of the common bile duct, defined as isolated strictures in the proximal or distal common bile duct as well as strictures in the hilar region or extensions to the extrahepatic left and right duct; (3) One or several episodes of late cholangitis; (4) Hepatolithiasis and choledocholithiasis; (5) Secondary biliary cirrhosis; (6) Postoperative biliary stenosis after hepaticojejunostomy; and (7) Biliary fistulas.

Descriptive statistics were calculated using Microsoft Office Excel 2007. Results of numerical data are presented as medians (quartiles). Group comparisons were performed using the Fisher’s exact test or the Mann-Whitney-U test of the statistics program GraphPad Prism 5. Furthermore, Pearson’s correlation analysis and linear regression analysis were done using SPSS. For the linear regression analysis the potentially confounding factors: gender, age at diagnosis of AE, years of follow-up, years from diagnosis of AE until endpoint (either late biliary complications or end of follow-up), years of albendazole, mebendazole and total benzimidazole treatment as well as previous surgery were considered.

Late biliary complications developed in 26 patients with non-resectable AE undergoing chemotherapy after a median of 15 (interquartile range, IQR: 8.25-19) years. The 11 male and 15 female patients had a median age of 55.5 (35.5-65) years at diagnosis of AE. Further patient characteristics are provided in Table 1, which summarizes patients with and without late biliary complications. AE was diagnosed between 1967 and 1997. All patients received long-term chemotherapy with benzimidazoles, mostly mebendazole (25/26), rarely albendazole (5/26). Switching from one benzimidazole to the other was necessary in 4/26 patients. Benzimidazoles were given for a median of 13 (IQR: 8.1-20) years.

To identify potential risk factors for late biliary complications, we performed Pearsons’ correlation and linear regression analysis of several possible risk factors (Table 3). Age at diagnosis of AE, age at diagnosis of biliary complications and time from diagnosis of AE until endpoint were not associated with an increased risk. However, longer duration of benzimidazole treatment was associated with an increased risk of developing biliary complications, also after adjustment for additional factors in the linear regression analysis. Both years of albendazole and mebendazole treatment correlated with the risk for the development of biliary complication even though directionality was different with albendazole apparently protective and mebendazole increasing the risk. At this point, this different directionality is based on very small subgroups, difficult to explain and other unknown confounding factors could be responsible.

A total of 15/26 patients with late biliary complications died until the endpoint of 2006. Five of the 15 deaths were AE induced liver failures. The ten other deaths were caused by infectious complications (n = 3), lethal gastrointestinal bleeding (n = 2), advanced age (n = 2) and cardiovascular diseases (n = 3). Overall, a substantial number of deaths (8/15, 53%) were probably or likely linked to the AE infection (5 liver failures, 1 variceal bleed after secondary biliary cirrhosis and 2 septic shocks in patients with biliary cirrhosis). 7/17 deaths (47%) were not clearly liver-related or due to biliary complications.

Death occurred on average 3.0 (2-5) years after the diagnosis of biliary complications.

The short time interval between the occurrence of late biliary complications and death underlines the prognostic value of such complications. However, survival after first diagnosis of AE was not different in the biliary complications group compared to the control group. Of note, only 4 out of 7 patients with secondary biliary cirrhosis died (1 due to progressive liver disease after terminating treatment, 1 due to gastrointestinal bleeding, 2 because of septic shock). Five of 14 patients with late cholangitis died during follow-up.

Is the occurrence of a late biliary complication a poor prognostic sign?

AE is a severe infectious disease with relevant morbidity despite substantial increases in life expectancy over the last three decades[5,7]. Diagnostic and therapeutic improvements include better imaging techniques, improvements in surgical and perioperative strategies and the possibility of indefinite treatment with benzimidazoles in patients with non-resectable AE. Our data from a large national AE cohort demonstrate that biliary complications are a frequent problem in these patients in the course of the disease. Despite prolonged life expectancy, our data show that late biliary complications may predict a poor prognostic outcome. Mortality after the occurrence of biliary complications is substantially increased, with a median and mean survival of only 3 and 3.6 years, respectively.

Despite the known beneficial effect of benzimidazoles on longterm survival[5,7], benzimidazoles seem to be unable to completely prevent biliary complications in non-resectable AE. Despite the regression or stabilization of lesions, 28% (26/94) of patients in our study with non-resectable AE developed late cholestatic complications such as cholestatic jaundice or cholangitis 3 to 26 year after the initial diagnosis of AE. In regression analysis, follow-up time was not associated with biliary complications. This suggests that our data are credible despite different mean and median follow-up times in the biliary complications and control group (mean follow up 11 years vs 20.3 years, median follow up 8.6 years vs 32 years). However, the range of follow-up was not substantially different. This makes it unlikely that differences in follow-up time are distorting the data.

The reasons for late cholestatic complications on benzimidazole treatment are probably multifactorial and not just a consequence of previous surgery, larval proliferation and biliary infiltration. Hypothetical explanations include malcompliance with benzimidazole treatment, which was not addressed in our study. However, in clinical practice benzimidazole levels are measured regularly (usually 4 h after drug intake) making malcompliance an unlikely cause for most patients. Furthermore, inactive AE cysts may trigger a non-productive immunological reaction, resulting in progressive fibrosis. In another scenario, the altered bile duct anatomy after AE infiltration might promote secondary infections or duodenal reflux causing secondary inflammation and fibrosis. This would explain why benzimidazoles seem to be able to inhibit AE growth, but not always the occurrence of AE complications such as biliary obstructions[19]. In any case, we are unable to determine whether benzimidazoles are only partially effective for the prevention of biliary complications or were started too late in the course of the disease.

How should the knowledge of biliary complications and their impact on long term survival change our management of non-resectable AE? It seems crucial that primary care physicians and gastroenterologists caring for such patients pay attention to the relevant risk of late biliary complications under long-term benzimidazole treatment, which is no guarantee for symptom-free long-term survival. After the detection of biliary complications, patients might benefit from advanced treatment options and tertiary care centers should be consulted. Centers will consider the benefits and risks of interventional procedures including ERCP and PTCD in the treatment of biliary complications. Furthermore, early liver transplantation in incurable symptomatic biliary AE has been suggested[20], which has so far only rarely been done due to insufficient available data. Nevertheless, an individual discussion about the risks and potential benefits of liver transplantation with otherwise eligible patients can be considered.

We thank our study nurse, Karin Riederer, for her meticulous help in conducting this study.