METHODS: Twenty patients with gastrointestinal adenocarcinoma based on endoscopic and biopsy findings (ten patients with gastric cancer and ten patients with colorectal cancer) who received treatment in our hospital between August 2007 and December 2008 were included in this study. None of the patients had received anti-tumour agents prior to As2O3 treatment. As2O3 was administered intravenously at a dose of 0.01 g/d diluted with 5% glucose in normal saline for 2-3 h for 3 consecutive days before surgery. Morphological changes associated with apoptosis of gastrointestinal cancer cells were observed by light microscopy. Changes in the apoptotic index induced by As2O3 were investigated using the terminal deoxynucleotidyl transferase dUTP nick end labelling method. Expression levels of p53 and Bcl-2 proteins in gastrointestinal cancer tissues were determined by immunohistochemistry.

Core tip: In this study, patients with gastrointestinal cancer were treated with arsenic trioxide for the first time. The use of arsenic trioxide in neoadjuvant chemotherapy prior to surgery improved surgical results.

Gastrointestinal cancer (GIC) is one of the most common malignant tumours in China. Although early GIC can be treated by surgical resection, the response of advanced-stage GIC to conventional chemotherapy or radiotherapy is usually unsatisfactory. Following studies in Harbin and Shanghai, arsenic trioxide (As2O3) was reported to be an effective drug for the treatment of patients with acute promyelocytic leukaemia (APL), by selectively inducing apoptosis in APL cells[1-3]; the effect of As2O3 on solid tumours has since been demonstrated in GIC cells in vitro and in vivo[4-7]. However, the clinical efficacy of As2O3 for the treatment of GIC remains unknown. Based on the above studies, we treated GIC patients with As2O3, observed its ability to induce apoptosis in GIC cells, and explored the possible molecular mechanism underlying this effect by detecting the expression levels of p53 and Bcl-2 in As2O3-treated GIC cells.

Twenty patients with gastrointestinal adenocarcinoma based on endoscopic and biopsy findings, including ten patients with gastric cancer and ten patients with colorectal cancer who received treatment in our hospital between August 2007 and December 2008, were included in this study. None of the patients had received anti-tumour agents. As2O3 was administered as an intravenous infusion at a dose of 0.01 g/d diluted with 5% glucose in normal saline for 2-3 h for 3 consecutive days before surgery.

Human gastrointestinal adenocarcinoma tissue specimens were obtained endoscopically from the same patients before and after As2O3 treatment and surgery.

The apoptotic cell morphology of GIC cells was examined by light microscopy.

Apoptosis was assessed via transferase dUTP nick end labelling (TUNEL) assay according to the instructions of the In Situ Cell Death Detection Kit (Boehringer-Mannheim, Germany). Briefly, after three washes with phosphate-buffered saline (PBS), 400 μL TUNEL reaction solution was added to the well, followed by incubation at 37 °C for 1 h. Stained cells were examined under the light microscope. Apoptotic cells were scored as the number of positively stained cells per 1000 cells (n = 5). The apoptotic index (AI) was calculated as follows: AI = (number of apoptotic cells/total number of cells) × 100%.

Results were analysed using the SPSS13.0 statistical software package. All values were expressed as mean ± SD. Comparisons of values before and after As2O3 treatment were performed using one-sample t tests, and correlation analysis was performed using linear correlation. Values of P < 0.05 were considered statistically significant.

The number of apoptotic cells increased after As2O3 treatment as determined by light microscopy. Typical apoptotic morphological features were detected in GIC cells after treatment, including cellular shrinkage, cell nuclear fragmentation, chromatin condensation, and the production of apoptotic bodies (Figure 1). 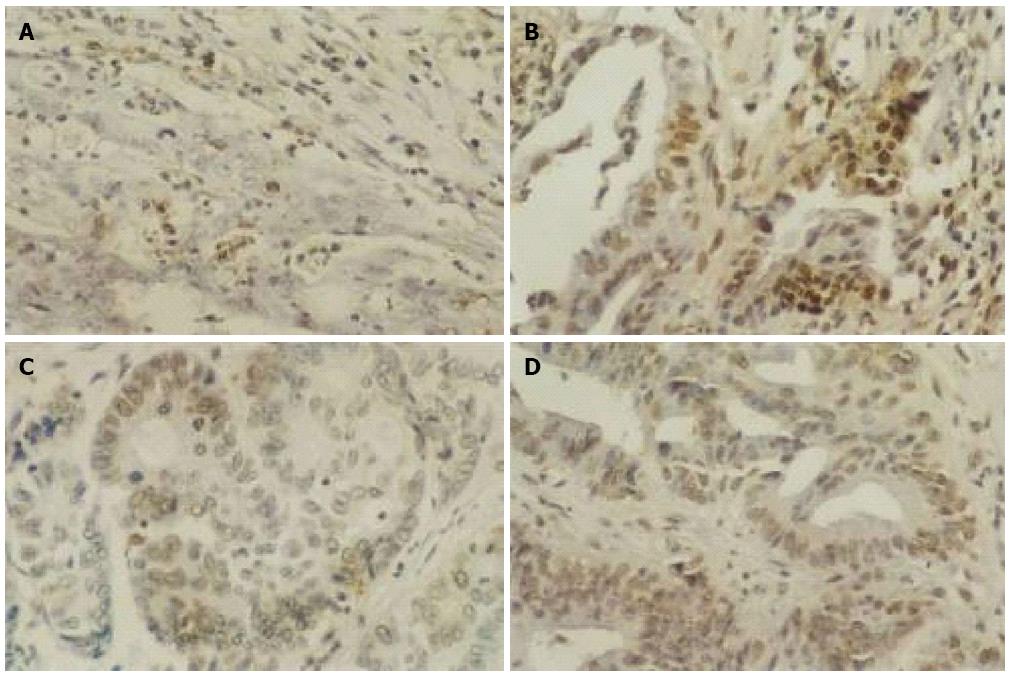 There was no significant change in p53 protein expression in either gastric or colon cancer tissues after As2O3 treatment, suggesting that the anti-apoptotic p53 gene was not sensitive to As2O3 at a dose of 0.01 g/d for 3 d (Table 1, Figure 3). 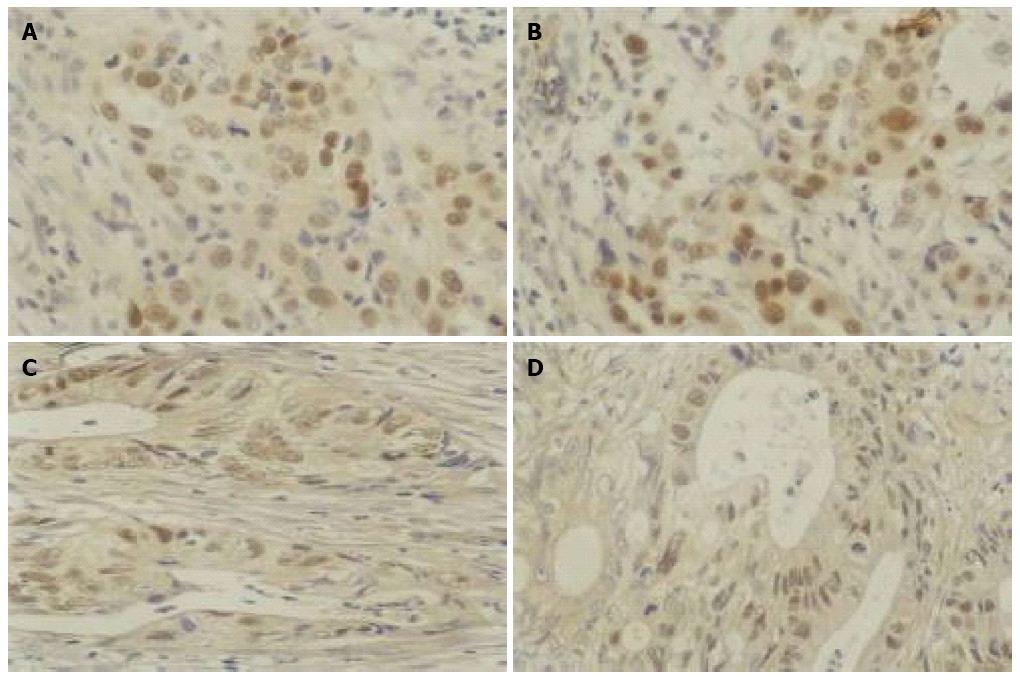 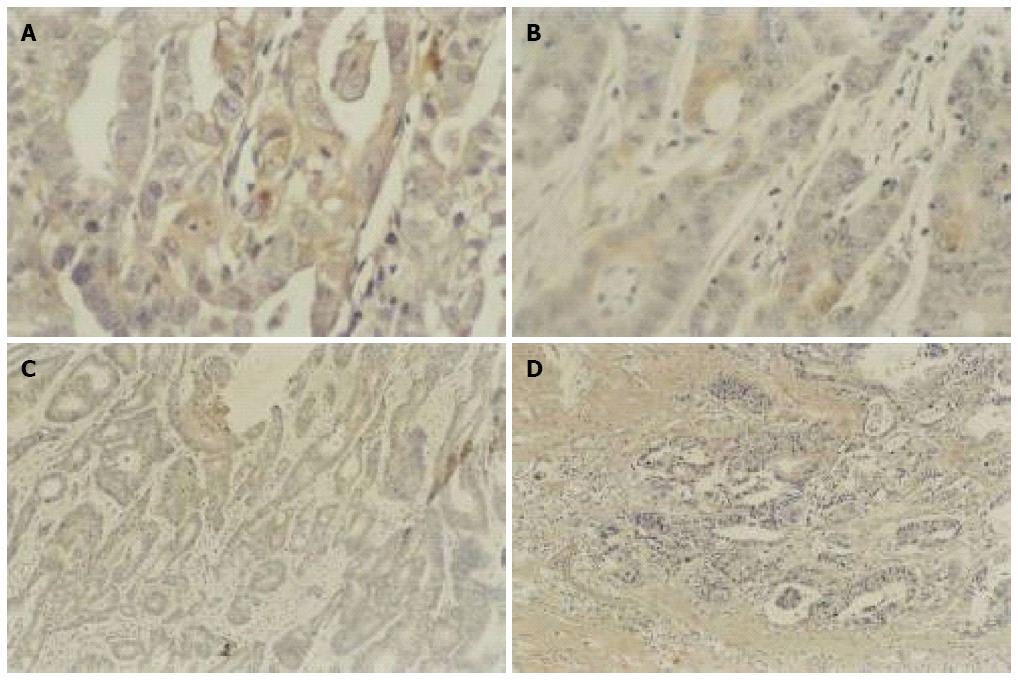 According to the above observations, the AI of GIC cells increased following the down-regulation of Bcl-2 protein expression. The correlation between apoptosis and Bcl-2 expression was examined to determine whether changes in Bcl-2 expression represented the molecular mechanism responsible for As2O3-induced apoptosis of GIC cells. The results showed no significant correlation between these measures in either gastric or colon cancer cells (Figure 5).

Figure 5 Linear correlation analyses between apoptotic index and Bcl-2 expression in gastric cancer (A) and colon cancer (B) (%). Data are given as mean ± SD. No significant correlation was detected.
Clinical safety of As2O3 treatment

Two patients experienced vomiting after As2O3 treatment, which resolved after symptomatic treatment. Second-degree atrioventricular block occurred during As2O3 treatment in one patient, who recovered after treatment. There were no other secondary effects in any other patients.

The use of arsenic compounds as drugs has a long history in traditional Chinese medicine. As2O3 has been identified as an effective drug for the treatment of APL, with induction of apoptosis representing the main mechanism of action. Numerous clinical trials on As2O3 are therefore underway for the treatment of haematopoietic malignancies and solid tumours[8-10].

Recent studies[11-15] reported that As2O3 could induce apoptosis in various solid tumour cell lines, including GIC cell lines, as well as in animal models of GIC, especially gastric cancer. However, no clinical trial on As2O3 in patients with gastric cancer has been reported.

In the present study, we treated GIC patients with As2O3 and examined its effect on GIC cells. Light microscopy showed morphological changes characteristic of apoptosis in GIC cells in As2O3-treated patients. TUNEL assay showed that AI was also significantly increased in GIC cells of treated patients. These results suggest that As2O3 induces apoptosis of GIC cells not only in cell lines and animal models, but also in the clinical setting. The induction of apoptosis in GIC cells from GIC patients may indicate a new potential strategy for the treatment of these tumours. Gu et al[16] found that the induction of apoptosis was time- and concentration-dependent. In line with previous clinical reports, we chose a relatively safe dose of As2O3 in this study. However, the optimal dose required to produce the maximal clinical effect with minimal toxicity remains to be determined.

To further confirm the possible mechanism of As2O3-induced apoptosis, we determined the effect of As2O3 on p53 and Bcl-2 expression. In contrast to the previous reports, our immunohistochemical analysis found no significant change in p53 protein expression in either gastric or colon cancer tissues following As2O3 treatment. Possible reasons for this discrepancy are as follows: (1) As2O3 treatment was only administered for a short period (3 d); (2) the dose of As2O3 used in the current study may have been too low; (3) the effect of As2O3 on p53 expression may be related to the stage of GIC; or (4) the internal environment in GIC patients may be more dynamic than that in cell lines. Further studies are needed to clarify the effect of As2O3 on p53 protein expression in human GIC cells.

Bcl-2 is considered a survival gene that plays an important role in inhibiting tumour cell apoptosis[22]. Our experimental results revealed that As2O3 down-regulated the expression of Bcl-2 protein in human GIC tissues. However, the change in Bcl-2 protein expression was not correlated with AI in either gastric or colon cancers, suggesting that other genes may be involved in the process of As2O3-induced apoptosis in human GIC.

In conclusion, the results of this study indicate that clinical treatment with As2O3 induced apoptosis of GIC cells without causing serious adverse effects. In addition, although Bcl-2 gene expression was down-regulated by As2O3, this did not seem to be the mechanism responsible for As2O3-induced apoptosis. Similar to P53 and Bcl-2 genes, SIRT6 is a new tumor suppressor gene in colorectal cancer as shown in recent studies, and it is possible that the glycolytic pathway limits the growth of tumors. We also used SIRT6 antibody on the tissue samples before and after As2O3 treatment, and SIRT6 was found to be higher after treatment than before treatment. Further comprehensive clinical studies are needed to clarify the significance and precise mechanism of action of As2O3 in the treatment of GIC patients.

Gastrointestinal cancer is a common clinical malignancy, and is often diagnosed when it is unresectable. Therapeutic options are required to improve patient condition prior to surgery and this is a research hotspot.

This study assessed the effects of arsenic trioxide on gastrointestinal cancer cell apoptosis.

Arsenic trioxide was administered properatively in gastrointestinal cancer patients and its efficacy as neoadjuvant chemotherapy was assessed.

The use of arsenic trioxide as neoadjuvant chemotherapy may be extended in to other types of tumors.

The experimental design is reasonable and practical, with patients giving fully informed consent, and complies with legal requirements, with satisfactory results.