RESULTS: The thickness of gastric mucosa in the body was not significantly different between each group (P < 0.05), but in the antrum the mucosa showed obvious atrophy in the two model groups wen compared with the N group (P < 0.0 and, P < 0.05, respectively); the thickness in the treatment groups given the large dose and moderate dose was remarkably recovered in comparison to that in the model groups (P < 0.01 and P < 0.05, respectively). The main ultrastructural changes were atrophy and degeneration of the epithelial cells and mucous cells, and increased intercellular space, especially in the antrum. In general, these changes were similar in the two model groups. The treatment of large dose and moderate dose decreased the degree of mucosal injury or recovered the injury significantly.

CONCLUSION: The characteristics of pathological changes of chronic gastritis in rats were atrophy and degeneration of epithelial cells and mucous cells, which thereby led to atrophy of the gastric mucosa. After treatment with JWD and SHD, the atrophic lesion recovered significantly.

Chronic gastritis is a common disease, and the atrophic form is closely related to gastric cancer. It is important to further explore the stereological and ultrastructural changes related to this disease in order to accurately define its pathogeny, pathology, parameters for diagnosis and treatment. The aim of this study was to examine the stereological and ultrastructural changes of chronic gastritis using a rat model and to observe the therapeutic efficacy of Jianpiwenwei decoction (JWD, invigorating the spleen and warming the stomach) and Shuganhewei decoction (SHD, dispersing the stagnated liver-qi and regulating the stomach) in respective treatments based upon the presence of Piweixuhan (PXG, cold of insufficiency syndrome of the spleen and the stomach) and Ganweibuhe (GBG, incoordination syndrome of the liver and the stomach). Although some reports of ultrastructural observations in chronic gastritis[1-4] have been published previously, the results have not been completely consistent. Stereological and ultrastructural changes related to chronic gastritis, particularly in the rat model, have not yet been reported. In this paper, we will report our results from these types of observations to expand the overall body of data on chronic gastritis.

The treatment groups and the model groups were respectively given oral decoction and NS once daily for 7 wk. JWD and SHD, which were Professor Jian-Xiong Zhao′s prescription that has been applied clinically for many years, were mainly composed of Sijunzi decoction and Sini powder, respectively. The decoctions were prepared according to the method described in the Chinese National Pharmacopoeia[7]. The crude drug content in each decoction was 1600 g/L.

After 7 wk of treatment, we euthanized all of the rats and obtained several specimens of gastric mucosa from the body and antrum, which were subsequently processed by routine methods to generate paraffin-embedded, ultrathin sections. The former specimen sections were stained with hematoxylin-eosin to allow for measurement of the thickness of gastric mucosa by the stereological method. In a square test system designed by us[8], PT = 368, LT = 20 mm, and we used the Weibel point-counting method[9] and the formula τ = LT·(ΣPb)/(ΣIa + ΣIb)[10]. In this formula, τ was thickness of gastric mucosa, Pb was the test point numbers in the mucosal section, and Ia and Ib were the intersection point numbers between the test lines and the mucosal surface and the basement side, respectively. All the data were processed statistically. The latter specimen sections were observed and photographed using a JM-100 CX electron microscope.

The stereological study showed that the thickness of gastric mucosa in the body was not significant different between each group (P > 0.05), but in the antrum the thickness of gastric mucosa was remarkably different. Specifically, the mucosal thickness of the two model groups was evidently diminished in comparison with that of the N group (P < 0.01 and P < 0.05), suggesting that the pathological changes were more severe in the antrum. The mucosal thickness in the treatment groups given the large dose and moderate dose recovered significantly, as compared to that in the model groups (P < 0.01 and P < 0.05); the efficacy of the small dose was not obvious (P > 0.05; Table 1).

The ultrastructural study indicated that the ultrastructure of mucosal epithelial cells and gastric glandular cells were nearly normal in the N group. There were a small number of G cells and ECL cells scattered throughout the glandular epithelium, with the former being distributed mainly in the antrum and the latter being mainly in the body. EC cells were also occasionally present in the antrum. Additionally, the mucosa of the two model groups showed a large number of acidophilic granulocytes and lymphocytes as well as a small number of plasmacytes that had infiltrated the tissue; in addition, the numbers of ECL cells was higher than the N group. The main ultrastructural changes were as follows: atrophied mucosal epithelial cell tissue, increased electron density and widened intercellular space, sparse surface microvilli, malformed nuclei, increased heterochromatin, decreased mucigen granules, and presence of fat droplets and vacuoles in the cytoplasm (Figure 1); in addition, the mucous cell tissues were also atrophied and showed widened intercellular space with lengthened microvilli on side surfaces and reduced presence of organelles. In the antrum specimens, in particular, the atrophied mucosa showed narrowing of the columnar or squamous cell epithelium, appearance of large vesicles in the cytoplasm and disappearance of mucigen granules (Figure 2); in the gastric chief cells, the rough endoplasmic reticulum (RER) was expanded to varying degrees, even to an extent that led to intracisternal sequestration, and some mitochondria were swollen and there was a general reduction in the presence of secretary granules. However, parietal cells showed only slight pathological changes, the main features of which being increased number of alveoli in the tubuloalveolar system, degenerated secretory channels in some cells, atrophied microvilli, and substantial shortening of channels with possible transition into vacuoles; finally, the perinuclear space was enlarged in a small number of cells. The above changes were basically similar between the two model groups, but the GBG group showed a slightly more severe degree of changes than the PXG group. After treatment, the injury in the groups treated with the large dose showed more improvement than that in the groups treated with the moderate dose; no effect of the small dose was observed. 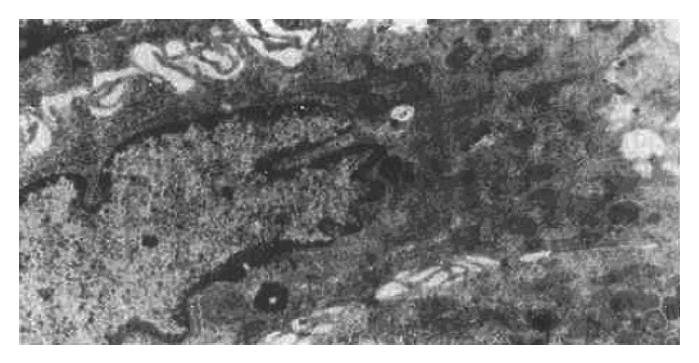 Figure 2 Mucous cells show atrophy and larger vesicles in the cytoplasm of the antrum tissues of the stomach.
DISCUSSION

In this study, the gastric mucosal thickness was measured and calculated by using the stereological method. The results revealed that the antral mucosa atrophied and became thinner with gastritis disease, as well as recovered significantly after treatment, but the changes of mucosa in the body were not obvious. Stereology a branch of applied mathematics[9], and it has been successfully adopted to study the relationship between structural stereoscopic morphology and its section, providing a much more precise and reliable way to measure and calculate microscopic images than the classical methods. The stereological method is simple and worth adopting to biological study, particularly for ultrastructural pathological changes of chronic gastritis, the findings of which to date have not been completely consistent[1-4].

Some researchers of gastritis have proposed that the major pathological changes related to the disease are swelling and vacuolation of the mitochondria. Indeed, these changes, along with RER enlargement, were found to occur in the epithelial and glandular cells of specimens in our current study; in addition, some of these changes involved G cells. However, the majority of the ultrastructural pathological changes that were observed in the rat models of chronic gastritis employed in our current study have not been reported so far. The major ultrastructural pathological changes of the two model groups we established were atrophy and degeneration of cells, with a particular involvement of the cells in the antrum, which thereby caused the mucosa of this region to become thinner. The mechanism underlying these observations may be that the isoimmunization stimulated the body to produce an immune reaction, which in turn injured the mucosal cells.

Our study also found that ECL cells were increased in mucosal epithelium. This cell type is known to secrete histamine[11] and to have a chemotactic extruding function that effects eosinophilic leucocytes. Therefore, it was not surprising to find a large number of eosinophilic leucocytes had infiltrated the gastric mucosa of our disease models. It is well known that the latter can take up immune complexes, inhibit immune reactions, stimulate release of histaminase to destroy and neutralize any histamine that has penetrated into the sub-epithelium, and reduce the extent of injury to tissue. The mucosal injury of our rat models did not lead to any serious necrosis of cells, but only changed the activity of some enzymes, reduced the cellular metabolic function and led to atrophy and degeneration of the cells. In addition, the findings from these models confirmed the above-mentioned morphological characteristics related to acidophilic leucocytes[12].

The ultrastructural pathologic changes of the two model groups were not completely consistent with those of the clinical patients that have been reported previously in the literature nor of those observed clinically by our team[1-4,13]. These discrepancies may be related to the following. First, the time of the animal model is shorter than that of humans, in whom the disease course is longer due to the presumed increased complexity of the human system. Second, unknown factors undoubtedly underlie the slightly different ultrastructural pathological changes of the two model groups.

Experimental results indicated that the JWD and SHD treatments using large and moderate doses can effectively treat the ultramicroscopic pathologic changes related to PXG and GBG. The mechanism lies in the likelihood that the decoction can not only regulate the body′s immune function but also regulate the functions of the vegetative nervous system, the digestive system and the endocrine system, and thereby achieve a significant therapeutic efficacy.