A 57-year-old male worker suffered from recurrent dull pain over the upper abdomen for 2 years and presented with worsening over the recent past 3 mo. The pain was described as persistent, irregular and without radiation but accompanied by loss of appetite, remarkable emaciation, anemia and weight loss of 10 kg. The patient was admitted on February 29, 1988.

The findings included: P.E., no positive findings; red blood cell count, 1.5 × 1012/L; Hb, 40 g/L; stool occult blood, positive. X-ray examination showed a filling defect of about 6 cm in diameter with a 2 cm niche over the lesser curvature below the cardia. A 0.5 cm niche was also found over the pyloric canal. The X-ray diagnosis was protuberant lesion of the upper gastric body on the lesser curvature. Gastroscopy showed a 3 cm ulcerative lesion with projected margin near the cardia. Biopsy diagnosis was gastric ulcer, but a second gastroscopic biopsy diagnosis was gastric leiomyobastoma.

The patient underwent an exploratory operation under general anesthesia on March 3, 1988. Proximal gastrectomy and gastroesophagostomy were carried out smoothly with uneventful recovery. The pathological findings included a mass of 8 cm × 7 cm × 6 cm in size, with an ulcer about 4 cm in diameter (Figure 1). The tumor was covered with gastric mucosa and showed partial necrosis, ectoplasm and round or oval nuclei, around which there was sharp transparent halo (Figure 2) interposed with a small amount of collagen fibers. There were 5 karyokinetic phases observed per high power field. Masson staining revealed muscle cells and myoblastic cells as red and the interstitial cells as green. The plasma was negative by PAS staining. Two of the three lymph nodes from the right side of the cardia were found to be occupied by metastasis of the leiomyoblastic cells. 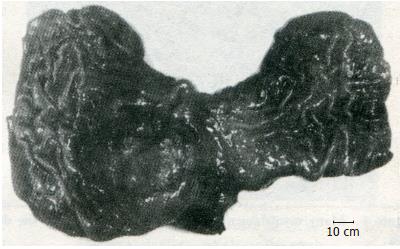 Figure 1 A stomach mass located at the cardia on the lesser curvature, having 8 cm × 7 cm in volume, projecting into the gastric lumen with a 4 cm ulcer. 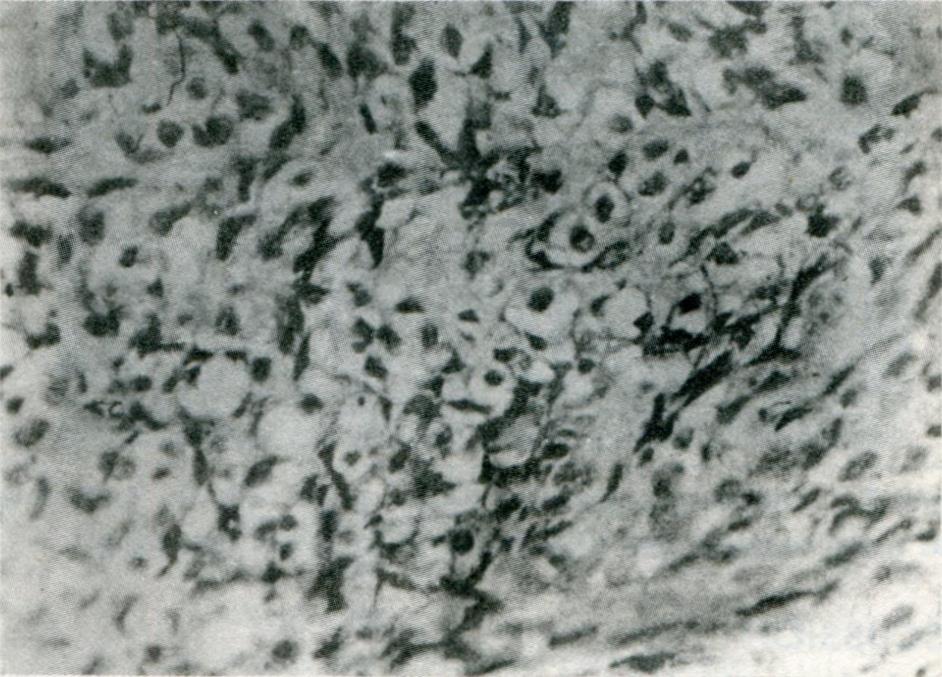 Figure 2 Round and polygon-shaped tumor cells interposed with small amount of collagen fibers, with round central nuclei and clear perinuclear zones.

Electron microscopy showed that the nuclei were spindle-shaped, with both clear and dark cells in apposition. Many pinosomes were observed on the surface of the membrane of the clear cells (Figure 3). The dark cells were shown to penetrate into the clear cells, which were abundant in the rough endoplasmic reticulum with a remarkable amount of myofilaments and dense patches within the dark cells (Figure 4) and abundant organelles within the clear cells. Golgi complex and rough endoplasmic reticulum were well developed with cystic extension (Figure 5). 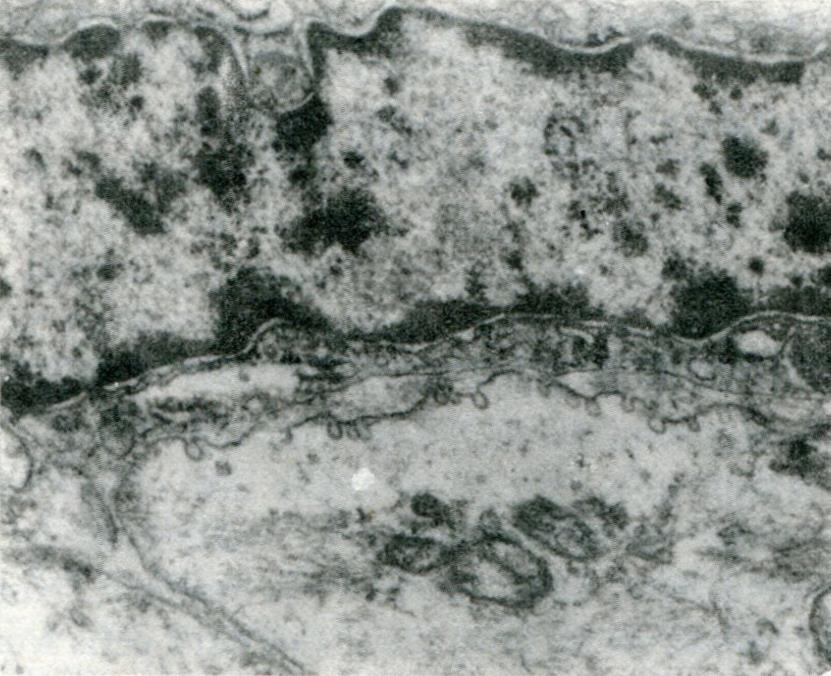 Figure 3 Both clear and dark cells with spindle-shaped nuclei are in apposition, with many pinosomes on the membrane of the clear cells. 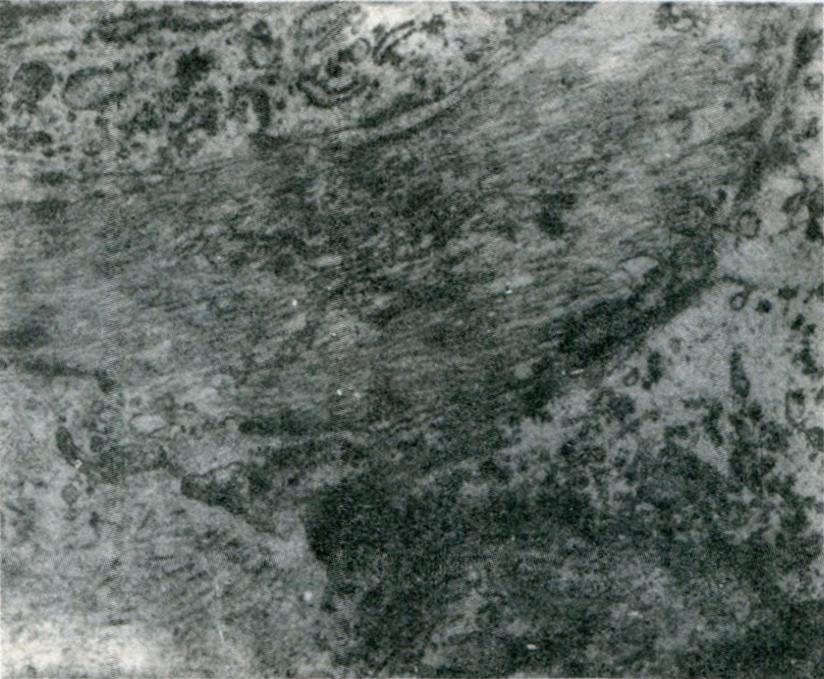 Figure 4 Many myofilaments and dense patches within the dark cells. 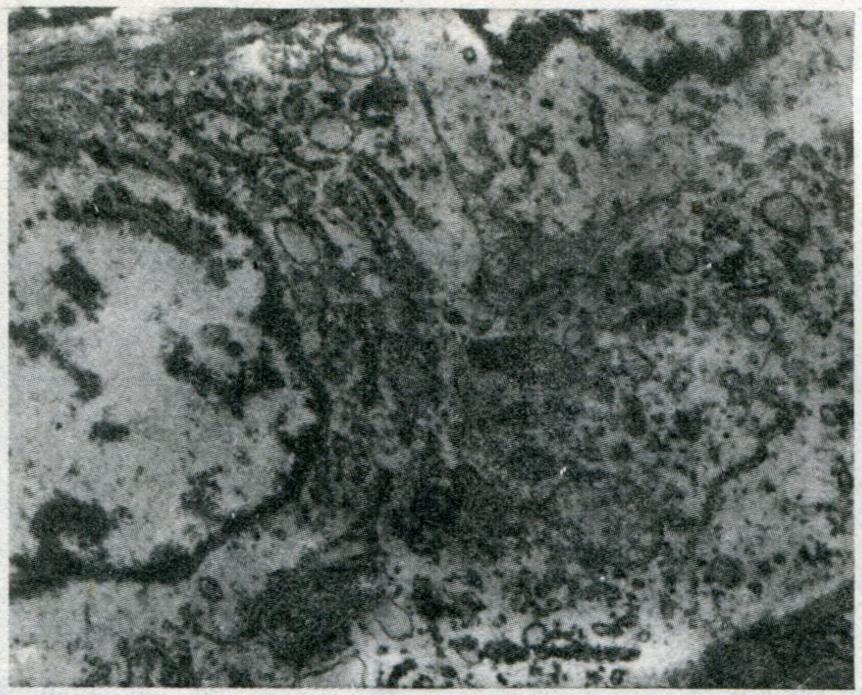 Leiomyoblastoma is also termed Bizarre leiomyoma. In 1962, Stout[1] reported 69 cases of Bizarre leiomyoma and first termed this condition as leiomyoblastoma or Bizarre leiomyoma, which has been used universally since then. The gastrointestinal tract and esophagus are especially prone to developing leiomyoblastomas. Some other organs and tissues, such as uterus, vulva, retroperitoneum, mediastinum, lungs, urinary bladder, prostate and subcutaneous tissue, can also develop this disease. In the stomach, the tumor is often found over the antrum and the body, and the cardia. The present case was located near the cardia. One-hundred-and-fifty cases reported by Salajar[2] had a mean age of 56.6 years. Tumor size ranged from 0.5 cm to 20 cm in diameter and the heaviest one weighed 3500 g. In general, the tumor is single, with only 6.8% presenting as multiple.

Since the preoperative diagnosis is not easy, most cases are diagnosed pathologically after operation. The biopsy could be taken directly from the tumor since the ulceration of the mucosal surface usually exposes the tumor. Recently, Paparzin[3] reported the first case of leiomyoblastoma in the lung, which was found by bronchoscopy. Our case was grossly diagnosed as ulcerative carcinoma by gastroscopy. The first biopsy failed to reach the tumor and was diagnosed as an ulcer, but the second time the specimen was accurately taken and accurate diagnosis of leiomyoblastoma of the stomach was made pathologically. This is the first case of leiomyoblastoma diagnosed by gastroscopic biopsy in our country. It is clear that it is possible to diagnose the disease accurately through multiple biopsies before operation.