AIM: To elucidate the biological and clinicopathological significance of neuroendocrine (NE) cells in gastric carcinoma (GC).

METHODS: One hundred and eighty nine patients with various histological types of GC were observed using light microscopy, histochemistry, immunohistochemistry and electron microscopy. Of these, 127 patients were followed up.

RESULTS: Chromogranin A (CgA)-positive GC was demonstrated in 85 cases (45.0%). The types of NE cells in GC were probed using 9 kinds of hormone antibodies, and 49 cases (67.2%) presented more than one hormone. NE cells were found more often in poorly differentiated GC than in well differentiated GC (P < 0.01). Expression of some kinds of hormone was related to the differentiation and histological types of GC. bombesin, calcitonin (P < 0.01), gastrin and serotonin (P < 0.05) were more highly expressed in poorly differentiated cases than in well differentiated ones. Nineteen cases with metastatic foci in the regional lymph nodes were found to have CgA-positive cancer cells. The presence of HCG in metastatic lymph nodes was more often observed than that of other hormone (P < 0.01). The survival rate of patients with NE cell-positive GC was 38.9%, and of NE cell-negative GC was 52.7%. Five of 7 patients (71.4%) with somatostatin-positive GC were still alive at the follow-up (range: 33-66 mo), but 4 patients with HCG-positive GC had died (range: 12-29 mo).

Resected GC specimens (n = 189) and normal stomach specimens (n = 5) obtained from autopsy were collected from the general Hospital of Beijing Commanding Area during the period of 1987 to 1990. The patients (154 men, 35 women) were aged 21 to 83 years (mean, 55.9 years). The specimens were cut along the greater curvature. Four-five blocks were taken for each specimen including tumor and regional lymph nodes. The blocks were fixed in 10% formalin and embedded in paraffin. Fifteen serial sections (5 micron each) were cut from each block. Hematoxylin and eosin, alcian blue-periodic acid (AB-PAS), and orcein/AB staining were carried out. The immunohistochemical staining was visualized with the ABC procedure (ABC kit, K355; Dako, United States). The primary antibodies and positive control are listed in Table 1. All antibodies are polyclonal except for the monoclonal SERO (antibodies from Dako, Copenhagen, Denmark, except for bombesin (Bom) which was from Cambridge Research Biochemical Limited, England). Peroxidase was revealed using DAB. Control of the specificity of the immunoreaction was performed by incubating consecutive sections with non-immune serum instead of the primary antiserum or with the specific antiserum that had been preabsorbed with an excess of respective antigens.

The fresh GC specimens obtained via surgery and biopsy were fixed immediately by incubating in 3% sodium salt-buffered glutaraldehyde solution for 4 h, followed by rinsing with 0.17 mol/L sodium carboxylate buffer, dehydrating through an alcohol series, embedding in Epon-Araldit, and making semi-thin sections for orientation and ultra-thin sections thereafter. The sections were double-stained with lead citrate and uranium acetate for observation under a JEM-1200EX electron microscope.

Statistical significance was determined using the chi-square test for the measurements of NE cells in GC. Kaplan-Meier survival curve was evaluated using the log-rank test.

Eighty-five of 189 total GCs showed variable extent of chromogranin A (CgA) staining, 73 of which were observed by immunohistochemical methods with 9 types of hormonal antibodies. Only 4 of these expressed CgA without any hormonal expression, while 20 contained only one kind of hormone, 18 two kinds, 12 three kinds, 9 four kinds, 7 five kinds, 1 six kinds and 2 seven kinds. Forty-nine of the 73 cases contained more than one kind of hormone. The 9 hormones found in the GCs were as follows: serotonin (5-HT) (n = 31), HCG (n = 28), pancreatic polypeptide (PP) (n = 26), ACTH (n = 22), calcitonin (CT) (n = 17), glucagon (Glu) (n = 16), somatostatin (SS) (n = 16), Bom (n = 15) and gastrin (GAST) (n = 13). The positive cells were triangular, flat or cylindrical in shape, with characteristic positive staining at the infranuclear spaces (Figure 1). The positive staining varied considerably in the NE cells, which were found to be scattered all over (Figure 2) and penetrating the deeper layers of the gastric wall or restricted within a small area of the tumor. 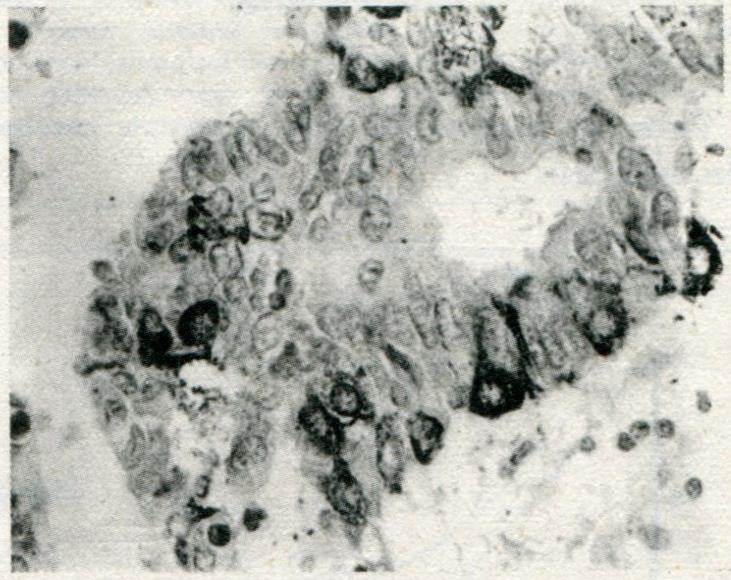 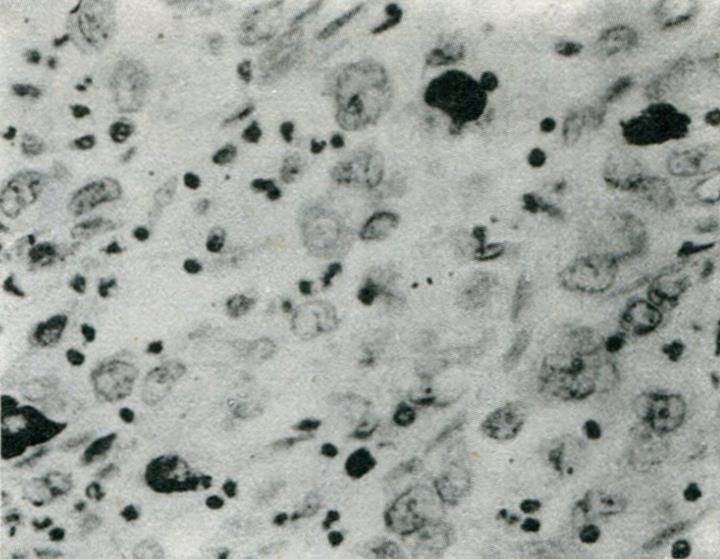 The 189 cases of gastric adenocarcinoma were grouped as well-differentiated or poorly-differentiated. There were more NE cells in the first group than in the second (Figure 3, P < 0.01). GAST, 5-HT, Bom and CT were more highly expressed in the second group. In 72 of 161 cases, metastasis of the lymph nodes was found; moreover 32 of 88 (36.4%) GC cases showing CgA negativity and 40 of 73 (54.8%) showing CgA positivity also presented with metastasis in lymph node (P > 0.05). Nineteen out of the 40 cases with lymph nodes metastatic foci showed CgA positivity, with HCG positivity in 13 cases, which was more frequent than the other hormones (Figure 4, P < 0.01). 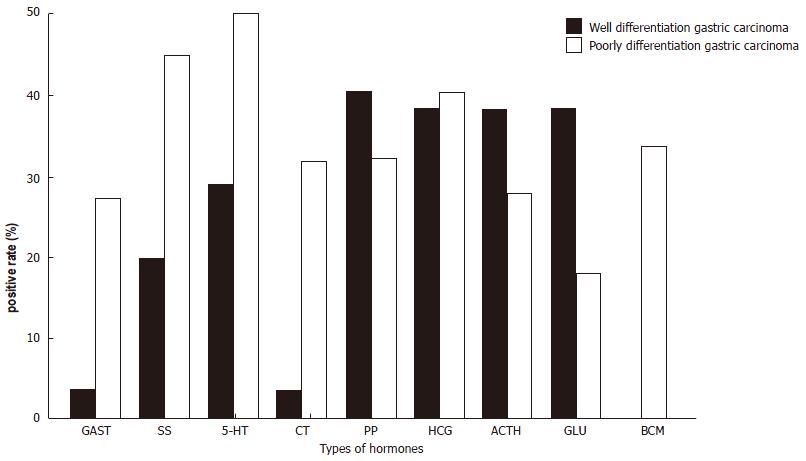 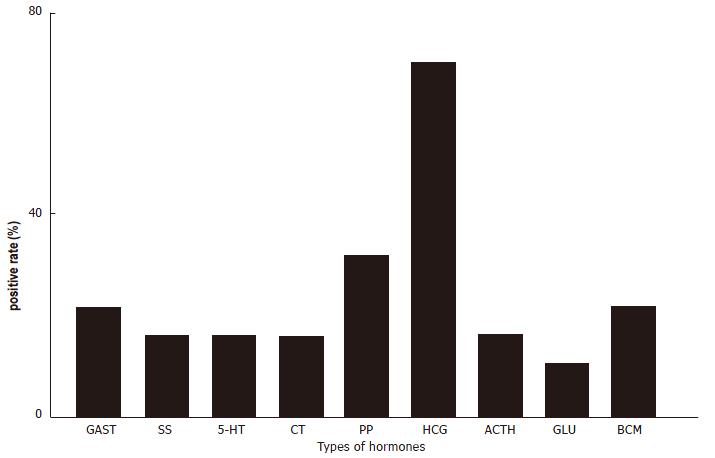 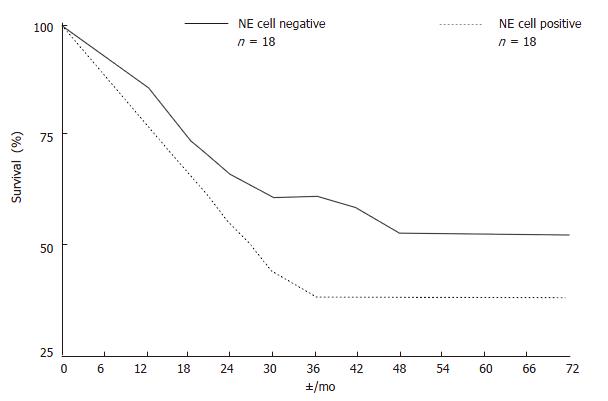 Under the electron microscope, the NE cells with dense granules were easily recognized in 8 of 20 cases. The NE cell presented dysplasia, irregular nucleus and large nulceolus. NE cells were divided into three types by endocrine granules: type I (3 cases), showing small pleomorphic granules and granule diameters of 100-200 nm (Figure 6), similar to enterochromaffin cells; type II (6 cases), showing either vesicular granules with an irregular dense core or a round and relatively homogeneous to coarsely granular dense core surrounded by a membrane (Figure 7), with granule diameter of 100-250 nm and similarity to enterochromaffin-like cells; type III (1 case), showing vesicular granules of larger diameter (150-350 nm). Eight of the 20 cases were CgA positive by immunohistochemistry. 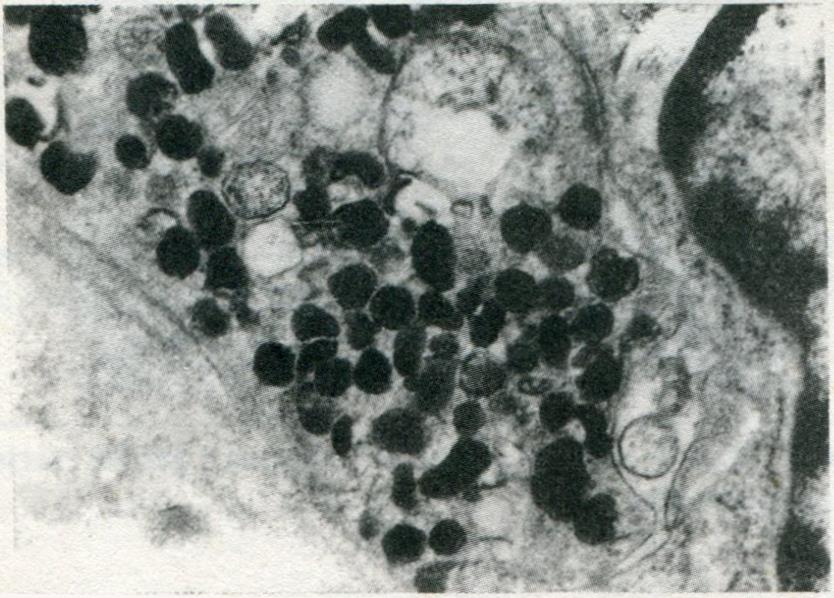 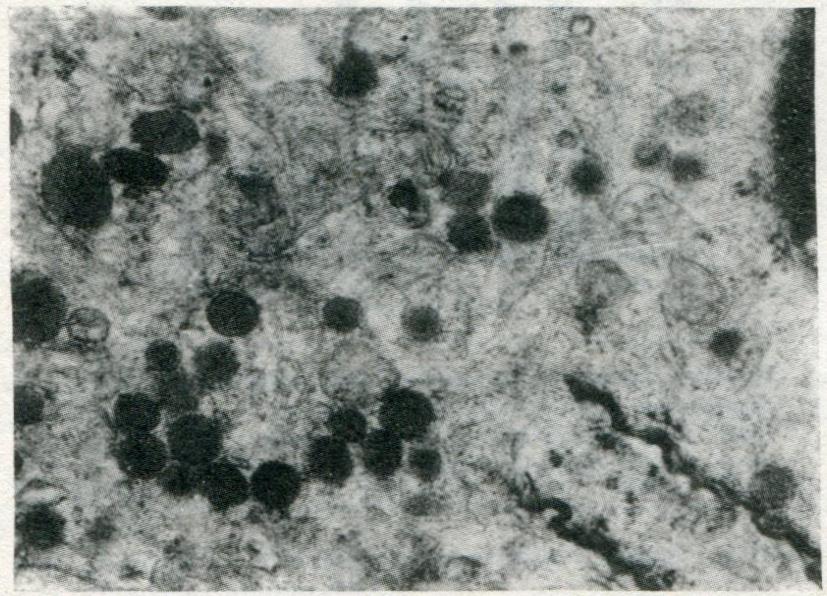 The presence of NE cells in GC has long been established. Endocrine differentiation is not a rare phenomenon in conventional gastric carcinoma (3.1%-53.3%). Using immunohistochemistry and electron microscopic examinations, with combination of 10 antibodies, we found that 85 of 189 cases of GC (44.9%) contained NE cells. 5-HT was the most frequent hormone antigen. Previous studies have suggested that endocrine-positive carcinomas are more frequent in poorly-differentiated, advanced and diffuse GC than in well-differentiated, intestinal type and early GC.[1]. In our study, the frequency was 54.2% to 32.9% (P < 0.01). It was interesting that we found some relationship between different types of hormones and histological types of tumor. Bom (P < 0.01), CT (P < 0.01), GAST (P < 0.05), and 5-HT (P < 0.05) were more frequent in poorly-differentiated cancers; in contrast, GLU was more frequent in well-differentiated cancers. Some reports pointed out that GC with NE cells tended to advance slowly and was associated with longer survival than GC without NE cells. In other studies, however, GC with NE cells was shown to occur much more frequently in advanced GC and to have poor prognosis.

The mortality of the cases with NE cells and without NE cells was 61.1% and 47.2%, whereas the lymph node metastasis rate in these cases was 54.8% and 36.4% respectively. The poor prognostic tendency in GC patients with NE cells was apparent, although the difference was not significant by statistical analysis. The different types of hormone might have some relation with tumor metastasis and prognosis. In our study, 19 of 40 cases with lymph node metastasis showed NE cells and 13 of those 19 cases (68.4%) were HCG positive in metastatic foci, which was significantly higher than that for other hormones (10%-31.6%) (P < 0.01). Four cases with HCG positivity died (range, 12-38 mo) and 5 cases with SS positivity survived (range, 36-66 mo).

Some peptides can act as growth factors stimulating proliferation of GC cells, such as GAST[2,3], Glu[4], CT and Bom[5]. Production of some hormones might be a marker of prognosis, such as HCG[6], which was not found in normal gastric mucosa. It has been reported that GC patients with high levels of HCG in the serum or a high density of HCG-positive cells in tumor tissue had a poor prognosis. Other hormones, such as SS, can be inhibitory to the growth of tumor cells. SS has been found to inhibit the growth of several experimental cancers, many of which are endocrine-dependent. The presence of receptors for gastrointestinal hormones, such as GAST and VIP[7], has been reported for GC cell lines. Some in vitro evidence of tumor cell growth regulation by autocrine and paracrine mechanisms led us to presume the existence of a paracrine interaction between NE cells in GC. Our findings suggest that some hormones, such as GAST, Bom, CT, HCG and Glu, may act as promoters of tumor growth and may be able to stimulate the growth of GC. On the other hand, such hormones as SS may be able to inhibit tumor growth. The relation of some hormones with GC, such as ACTH and PP, remains unclear.

In conclusion, we think that there are different NE cells producing different hormones in GC that may play different roles in the cancer pathogenesis. Further investigation is required to elucidate the significance of relations between GC and hormonal substances.