Hyperbilirubinemia has been presumed to prevent the process of atherogenesis and cancerogenesis mainly by decreasing oxidative stress. Dubin-Johnson syndrome is a rare, autosomal recessive, inherited disorder characterized by biphasic, predominantly conjugated hyperbilirubinemia with no progression to end-stage liver disease. The molecular basis in Dubin-Johnson syndrome is absence or deficiency of human canalicular multispecific organic anion transporter MRP2/cMOAT caused by homozygous or compound heterozygous mutation(s) in ABCC2 located on chromosome 10q24. Clinical onset of the syndrome is most often seen in the late teens or early adulthood. In this report, we describe a case of previously unrecognized Dubin-Johnson syndrome caused by two novel pathogenic mutations (c.2360_2366delCCCTGTC and c.3258+1G>A), coinciding with cholestatic liver disease in an 82-year-old male patient. The patient, suffering from advanced atherosclerosis with serious involvement of coronary arteries, developed colorectal cancer with nodal metastases. The subsequent findings do not support the protective role of Dubin-Johnson type hyperbilirubinemia.

Recent data have indicated the potent antioxidant properties of mild or moderately elevated serum bilirubin levels with substantial positive clinical consequences and especially their protective effect on atherogenesis and cancerogenesis[1]. A direct link between low serum bilirubin levels and peripheral vascular disease and the protective effect of mild or moderate unconjugated hyperbilirubinemia on atherosclerosis were confirmed in numerous clinical trials[2-5]. Antiproliferative, cytostatic and pro-apoptotic effects of bilirubin are well-known and have been demonstrated in both in vitro and in vivo studies[6-10]. However, conflicting data on the possible protective effect of elevated bilirubin levels against sporadic colorectal carcinoma have been reported in the literature[11-13].

Dubin-Johnson syndrome (DJS, OMIM 237500) is a rare, autosomal recessive disorder characterized by non-hemolytic hyperbilirubinemia with no progression to end-stage liver disease[14]. Both the conjugated and unconjugated form of bilirubin can be elevated in DJS subjects, with the former ranging from 17% to 88% of the total bilirubin with a mean value of 60%[14,15]. In addition to the fluctuating jaundice caused by biphasic hyperbilirubinemia due to absence or deficiency of human canalicular multispecific organic anion transporter MRP2/cMOAT[16-18], DJS subjects may suffer from non-specific symptoms such as weakness and abdominal discomfort. Urinary coproporphyrin output is normal; however, 80% of the coproporphyrin fraction is represented by coproporhyrin I (normally 25%)[19]. The biliary excretion of anionic dyes including bromosulfophthalein, indocyanine green and cholescintigraphy radiotracers is delayed. Liver histology in DJS shows an accumulation of distinctive melanin-like lysosomal pigment in an otherwise normal liver, which gives the organ a characteristic dark pink or even black colour[14,20].

In this report, we describe the case of unintentionally detected DJS complicating liver injury in an 82-year-old patient who was being followed for previously diagnosed colorectal cancer and ischemic heart disease.

An 82-year-old Caucasian male patient, a normotensive non-smoker with a history of right-sided hemicolectomy due to colorectal adenocarcinoma with nodal metastases five years ago and ischemic heart disease, was referred to the hospital due to clinical jaundice with elevated serum bilirubin (total bilirubin 220 μmol/L, direct bilirubin 171 μmol/L), gamma-glutamyltransferase (γGT) activity (4.7 μkat/L) and fluctuating alkaline phosphatase (ALP) activity (1.3-3.6 μkat/L) to exclude bile duct obstruction or metastatic liver disease. The patient complained of slight upper abdominal discomfort without pruritus or nausea. Complete blood count and serum electrolyte levels were normal, as was his serum lipid profile (serum cholesterol 3.5 mmol/L, high-density lipoprotein cholesterol 0.9 mmol/L, low-density lipoprotein cholesterol 2.5 mmol/L, triglycerides 1.3 mmol/L). Abdominal ultrasonography, endoscopic retrograde cholangiopancreatography and magnetic resonance cholangiopancreatography did not detect any obstacle or dilation of the biliary tree, and only slightly imperfect filling of the ductus choledochus was observed. Serological examinations for viral hepatitis (hepatitis A virus, hepatitis B virus and hepatitis C virus) and autoantibodies were completely negative. During the patient’s hospitalization, the activity of γGT and ALP gradually decreased but, due to persistent marked hyperbilirubinemia, a percutaneous liver biopsy was performed.

The liver tissue obtained at biopsy was standardly processed. Sections cut at 4-6 μm were stained with hematoxylin and eosin, periodic acid Schiff, Schmorl’s and van Gieson’s method. Analysis of the liver biopsy specimen revealed preserved architecture of liver parenchyma with perivenular and perisinusoidal fibrosis, subtle steatosis and only discrete intracellular cholestasis in centrilobular hepatocytes. The most striking feature, however, was an intense parenchymal pigmentation, with centrilobular and midzonal accentuation, consisting of coarse brown black pigment (Figure 1, Panel A-C). Special stainings (Gömöri, silver ammonium complex-Masson’s and Perls Prussian blue method) for pigment characterization were added. The pigment was negative in the Perls reaction and displayed rudimentary autofluorescence with gradually increasing intensity, especially in Shandon mounting medium and simultaneously reduced Masson’s solution. A retrospective analysis of the patient’s medical records back to 1994 revealed long-term, persistent, mixed, predominantly conjugated hyperbilirubinemia (total bilirubin fluctuating within the range 23.0-215.6 μmol/L, conjugated bilirubin 17.7-170 μmol/L). The conjugated-to-total bilirubin ratio was within the range of 40% (total bilirubin 202 μmol/L and conjugated bilirubin 80.6 μmol/L in 2009) to 89% (total bilirubin 41.8 μmol/L and conjugated bilirubin 37.2 μmol/L in 1994). Taking into account the normal activity of aminotransferases, γGT and ALP, DJS was suspected. 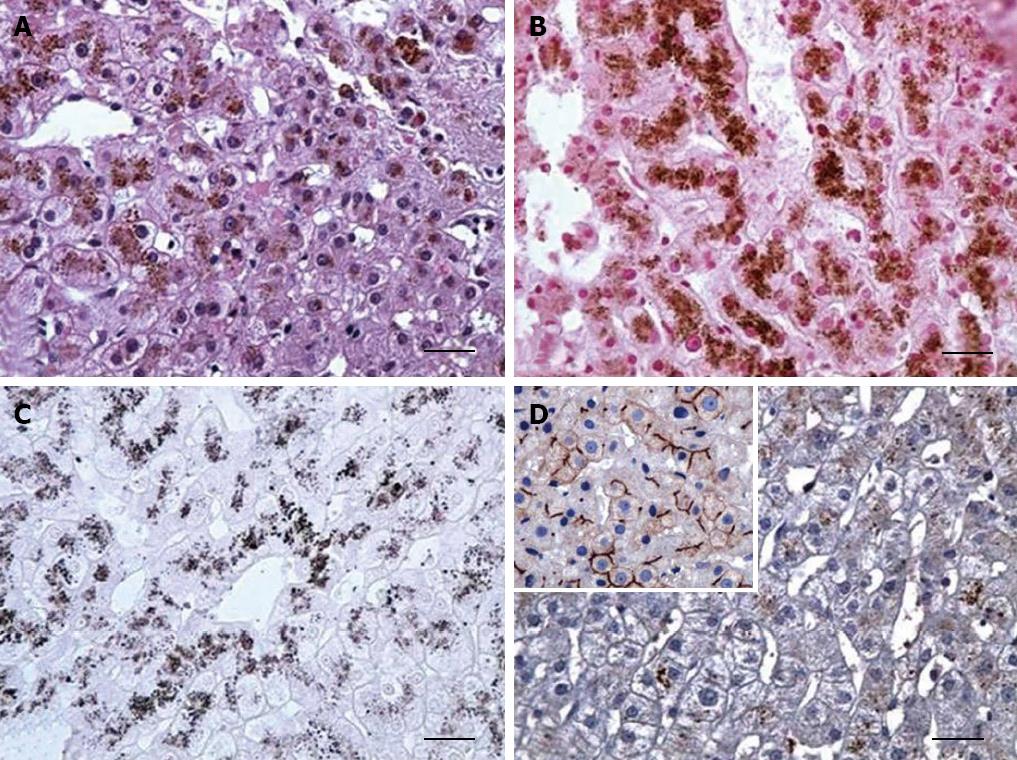 Figure 1 Histochemistry and immunohistology of the liver in Dubin-Johnson syndrome patient. A: Accumulation of distinctive dark brown pigment in hepatocytes was detected in hematoxylin and eosin staining; B: The pigment was negative in Perls reaction; C: The pigment reduced Masson’s solution; D: Immunohistochemical analysis for ABCC2/MRP2 protein was negative compared to the positive control (inset). Original magnification ×400 (bars correspond to 100 μm).

For immunohistochemical analysis, 4 to 6 μm-thick sections were incubated with the anti-MRP2 mouse monoclonal antibody (clone M2III-6, Kamiya, Seattle, WA). The EnVision Peroxidase Kit (Dako, Glostrup, Denmark) was used for visualization and counterstaining with Harris’s hematoxylin was performed. As a positive control, sections of an adult liver without cholestasis were stained, and liver sections incubated without primary antibody were used as negative controls. Immunohistochemical analysis for MRP2 protein was completely negative (Figure 1D).

Ultrastructural analysis was performed on the liver sample fixed with 4% buffered paraformaldehyde, osmicated, dehydrated in ascending ethanol solutions and embedded into Epon-Araldite mixture. Ultrathin sections were double-stained with uranyl acetate and lead nitrate and then examined under a JEM 1200 EX electron microscope. Intralysosomal localization of the pigment was demonstrated.

A mutation analysis of the ABCC2 gene was indicated to confirm the diagnosis of DJS at the molecular level. Written informed consent was obtained from the patient before the genetic investigation. ABCC2 was analyzed by direct sequencing of genomic DNA extracted from peripheral leucocytes. All 32 exons, with the adjacent parts of the intronic sequences, were amplified by polymerase chain reaction (PCR) using the intronic oligonucleotide primers listed in Table 1. Amplified fragments were gel-purified, extracted from the gel with QIA quick spin columns (Qiagene, Hilden, Germany), and sequenced on an ABI 3130 Genetic Analyzer (Applied Biosystems, Foster City, CA). The obtained sequence was compared with the reference sequences GenBank NM_000392 (mRNA) and NT_030059 (genomic DNA). An exon with suspected deletion was cloned into a pCR4.1-TOPO plasmid vector (Invitrogen, Carlsbad, CA), and the wild-type and mutated alleles were sequenced separately. Presence of the second mutation was confirmed by PCR-restriction fragment length polymorphism analysis (PCR-Bsh1236I RFLP).

Analysis of the ABCC2/MRP2 gene disclosed two novel mutations: a heterozygous deletion c.2360_2366delCCCTGTC in protein coding exon 18 (Figure 2A), and a heterozygous mutation c.3258+1G>A in intron 23 (Figure 2B and C). The former mutation in exon 18 was predicted to cause a reading frame shift and premature termination of DNA translation at position 803 with protein alteration p.Pro787LeufsX7. The latter mutation affecting the donor splice site of intron 23 was predicted to cause abnormal splicing of mRNA. Therefore, both mutations were considered as pathogenic. Histochemistry and mutation analysis accordingly established the diagnosis of DJS. 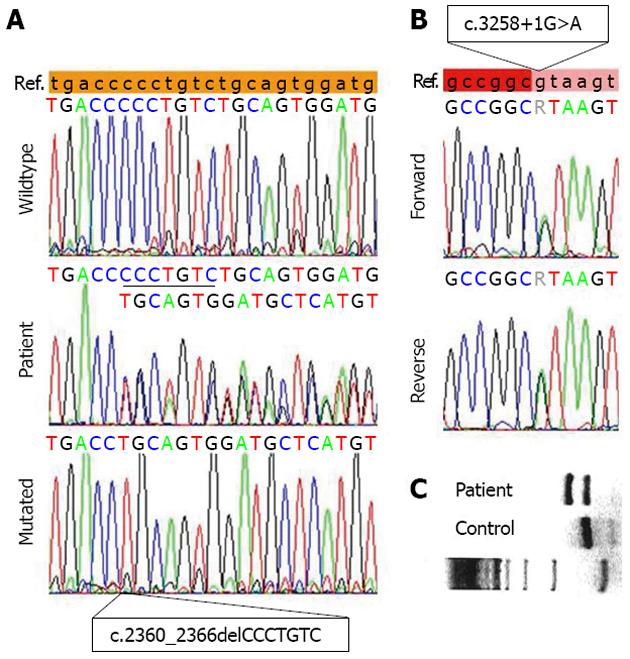 The patient suddenly died several months after being released from the hospital. The patient’s autopsy revealed no liver metastases and confirmed the diagnosis of advanced atherosclerosis with serious involvement of coronary arteries with signs of chronic myocardial ischemia.

The diagnosis of DJS is indicated by the presence of fluctuating predominantly conjugated hyperbilirubinemia, an increased ratio of urinary coproporphyrin I to coproporphyrin III, and a unique cholescintigram showing delayed visualization of the liver and biliary tract. Neither a percutaneous liver biopsy with evidence of melanin-like pigment and the absence of MRP2 protein nor mutation analysis are necessary for the diagnosis. Nonetheless, both methods may be helpful in complicated cases to establish the correct diagnosis and rule out more serious liver pathology.

In our patient, neither an examination of urinary coproporphyrin levels nor cholescintigraphy was performed. The diagnosis was based on biochemical evidence of fluctuating biphasic hyperbilirubinemia and characteristic findings in the liver biopsy, and further supported by disclosure of two pathogenic mutations by subsequent mutational analysis. Considering the clinical picture and the results of laboratory tests, the two mutations are supposed to be in transposition. Unfortunately, no living relatives of the patient were found to confirm our presumption.

As the clinical onset of DJS is most often seen during the teenage years or in early adulthood, the first recognition of the disease in old age is highly unusual. To the best of our knowledge, our patient is the oldest reported newly diagnosed DJS patient confirmed by mutation analysis.

The clinical presentation and laboratory findings of our case indicated the coincidence of DJS with mild cholestatic liver damage, the etiology of which remained obscure. The simultaneous occurrence of the syndrome with another hepatobiliary disease is well-known and the coincidence with another disease or pathologic stimulus can modify the clinical picture and results of laboratory tests, including histomorphology[21-24].

A significant fact in our case is the presence of colorectal adenocarcinoma with nodal metastases in a patient with chronic mixed hyperbilirubinemia. Numerous clinical trials have demonstrated the protective effects of hyperbilirubinemia against the development of sporadic colorectal cancer and an association of low bilirubin levels with an increased risk of colon cancer morbidity and mortality[10-12].

In addition, there are reports describing the protective effect of bilirubin on the development of atherosclerosis emphasizing the antioxidative and anti-inflammatory properties of bilirubin[2-5]. Interestingly, our patient, a lifelong normotensive non-smoker with normal lipidogram, suffered from ischemic heart disease and advanced atherosclerosis affecting both large arteries and peripheral circulation, especially coronary arteries.

In conclusion, our case demonstrates that DJS should be included in the differential diagnosis of liver diseases even in atypical age categories. The fact that our patient with DJS developed colorectal adenocarcinoma and clinically significant atherosclerosis indicates that Dubin-Johnson hyperbilirubinemia may not be sufficient to protect from atherogenesis and cancer development, even in the absence of established risk factors.