Direct-acting antiviral agents (DAAs) for hepatitis C virus (HCV) infection are one of the major advances in its medical treatment. The HCV protease inhibitors boceprevir and telaprevir were the first approved DAAs in the United States, Europe, and Japan. When combined with peginterferon plus ribavirin, these agents increase sustained virologic response rates to 70%-80% in treatment-naïve patients and previous-treatment relapsers with chronic HCV genotype 1 infection. Without peginterferon plus ribavirin, DAA mono-therapies increased DAA-resistance mutations. Several new DAAs for HCV are now in clinical development and are likely to be approved in the near future. However, it has been reported that the use of these drugs also led to the emergence of DAA-resistance mutations in certain cases. Furthermore, these mutations exhibit cross-resistance to multiple drugs. The prevalence of DAA-resistance mutations in HCV-infected patients who were not treated with DAAs is unknown, and it is as yet uncertain whether such variants are sensitive to DAAs. We performed a population sequence analysis to assess the frequency of such variants in the sera of HCV genotype 1-infected patients not treated with HCV protease inhibitors. Here, we reviewed the literature on resistance variants of HCV protease inhibitors in treatment naïve patients with chronic HCV genotype 1, as well as our experience.

Core tip: The standard of care for the treatment of hepatitis C virus (HCV) infection was peginterferon plus ribavirin until the recent approval of telaprevir- and boceprevir-containing combination therapies. These HCV protease inhibitors occasionally cause HCV variants with resistance mutations. We reviewed the literature reports of resistance variants of HCV protease inhibitors in treatment-naïve patients with chronic HCV genotype 1, as well as our experience. Even in treatment-naïve patients with chronic HCV genotype 1, naturally occurring HCV protease inhibitor-resistance mutations exist in some cases. The combination of direct-acting antiviral agents against regions other than HCV NS3/4A could eradicate HCV with these resistance variants.

Hepatitis C virus (HCV) is a positive-sense, single-stranded RNA virus, approximately 9600 nt in length, that belongs to the Flaviridae family. Globally, HCV infects 170 million people and approximately 120-140 million chronic HCV carriers exist[1,2]. HCV infection causes acute and chronic hepatitis, cirrhosis and hepatocellular carcinoma (HCC)[3,4]. HCV is classified into six major genotypes and > 100 subtypes[5]. HCV genotype 1 (subgenotypes 1a and 1b) is the most common genotype in western countries and Japan[5]. Treatment of HCV is complicated by the existence of different HCV genotypes. The standard of care was peginterferon plus ribavirin until the recent approval of telaprevir- and boceprevir-containing combination therapies[6-14]. Combination of peginterferon plus ribavirin results in sustained virological response (SVR) in nearly 70%-80% of patients with HCV genotype 2 or 3, but in only approximately 50% of those with HCV genotype 1[15,16]. Thus, treatment response is dependent on HCV genotypes and viral loads[17], viral sequence[18-21], host factors such as IL28B genotypes[22-35], drug adherence[36], and adverse events induced by therapeutic drugs[36].

Pharmaceutical companies are actively investigating and developing direct-acting anti-viral agents (DAAs) against HCV, which directly target specific HCV proteins such as NS3/4A protease[6-14], NS5A protein[37-39], and NS5B polymerase[40], which are important for HCV replication in hepatocytes. Two first-generation HCV protease inhibitors, boceprevir and telaprevir, were approved in combination with peginterferon plus ribavirin for treatment of chronic HCV genotype 1 in 2011[6-14]. Both protease inhibitors combined with peginterferon plus ribavirin increased SVR rates up to 70%-80% in treatment-naïve patients and previous-treatment relapsers with chronic HCV genotype 1 infection[6-14]. Next-generation HCV protease inhibitors will be available in clinics in the near future (Table 1)[41]. For example, simeprevir[42,43], faldaprevir[44,45], and vaniprevir[46-48] are currently in phase 3 trials. HCV protease inhibitors primarily are specific agents for HCV genotype 1. However, studies have demonstrated that simeprevir is fairly active against most HCV genotypes with the exception of HCV genotype 3a[42], and recently, in a phase 2 trial, the novel protease inhibitor MK-5172 showed even broader activity across HCV genotypes compared to simeprevir[49].

The low fidelity of HCV NS5B polymerase, high replication rate, and strong selective pressures on this virus lead to emergence of viral quasispecies. The quasispecies nature exists in a mixed population of viruses, with the fittest viruses being the predominant viral populations, as observed by sequence analysis[50,51]. In addition, new populations with every potential substitution are likely created and lost each day, some of which convey various degrees of resistance to DAAs[52-54]. Due to the high sequence diversity of HCV, naturally occurring pre-existing resistance mutations have been found at a low prevalence in HCV-infected, treatment-naïve patients[55,56].

We estimated a 98%-99% prevalence of HCV subgenotype 1b among patients infected with HCV genotype 1 in Japan[60]. Sera from 88 Japanese patients infected with HCV genotype 1b who were not treated with HCV protease inhibitors were examined. Some patients had been included in a previous study[60]. We investigated the naturally occurring pre-existing resistance mutations in these patients by using a direct-sequencing method. The study protocol was approved by the Ethics Committee of Chiba University School of Medicine.

Despite extensive efforts to develop more potent next-generation protease inhibitors, the long-term efficacy of this drug class is challenged by the rapid emergence of resistance[62,63], which could result in treatment failures such as viral breakthrough or relapse. Our identified mutations associated with resistance to protease inhibitors are shown in Figure 1. In the Protease Inhibitor for Viral Evaluation (PROVE) 1 and 2 clinical trials[8,9] of telaprevir in combination with peginterferon plus ribavirin, viral breakthrough occurred in approximately 7% of patients with HCV genotype 1a infection, compared with about 2% of those with HCV genotype 1b infection; approximately 10% of patients with either subgenotype 1a or 1b suffered a relapse after cessation of HCV protease inhibitor-treatment. In both ADVANCE and Illustrating the Effects of Combination Therapy with Telaprevir (ILLUMINATE) trials[11,13], about 60% of patients treated with telaprevir-based triple therapy achieved an extended rapid virologic response (eRVR), with no virus detected at weeks 4 and 12. 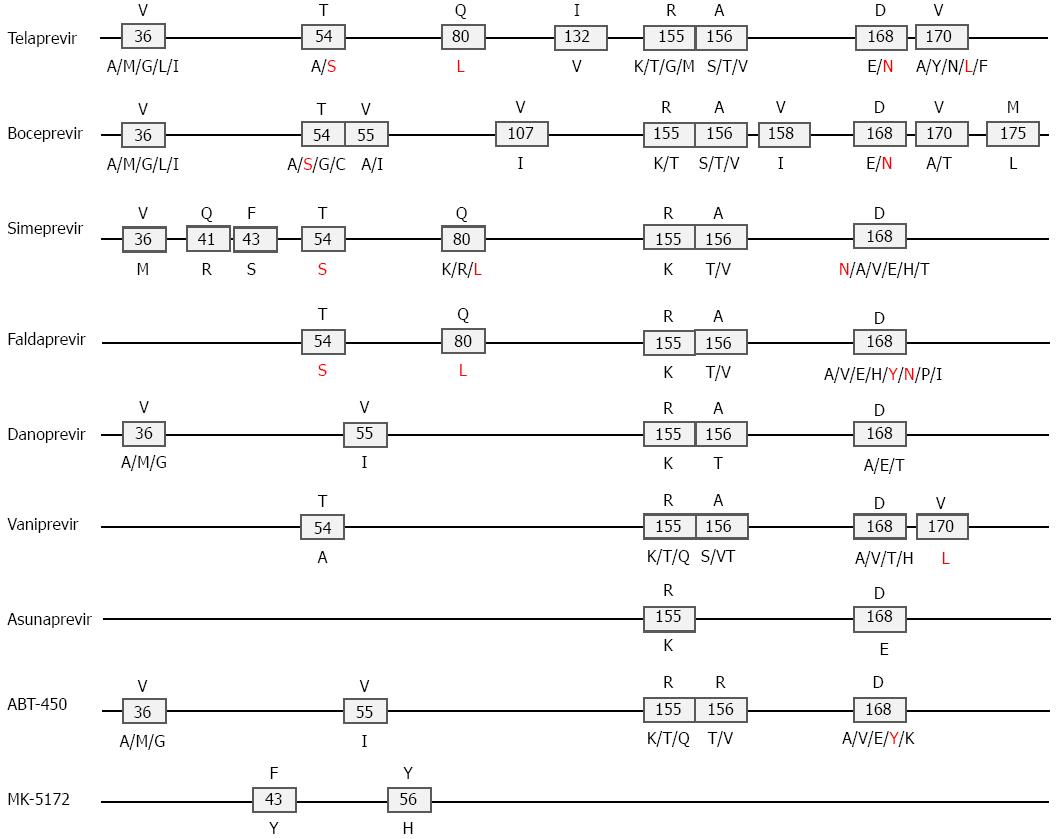 HCV variants associated with on-treatment virologic failure or relapse were evaluated by using site-directed mutagenesis in HCV replicon assay[62,64]. Variants V36A/M, T54A/S, R155K/T, and A156S conferred lower levels of in vitro resistance to telaprevir (three- to 25-fold increase in telaprevir IC50), and A156V/T and V36M + R155K variants conferred higher levels of in vitro resistance to telaprevir (> 25-fold increase in telaprevir IC50). HCV replicon variants generated from patient-derived sequences showed similar results. The in vitro replication capacity of telaprevir-resistant variants was lower than that of wild-type virus in the HCV genotype 1b Con1 replicon system[64-67]. When telaprevir-resistant variants were tested for cross-resistance against representative protease inhibitors in the HCV replicon system, HCV replicons with single substitutions at position 155 or 156 and double variants with substitutions at residues 36 and 155 showed cross-resistance to all protease inhibitors tested with a wide range of sensitivities. All telaprevir-resistant variants studied remained fully sensitive to interferon-alpha, ribavirin, and representative HCV nucleoside and non-nucleoside polymerase inhibitors in the replicon system. There are limited clinical data regarding re-treating patients who have failed an HCV NS3-4A protease inhibitor-based therapy such as telaprevir monotherapy, suggesting that re-treatment with triple therapy might be useful for certain patients.

In the boceprevir Serine Protease Inhibitor Therapy 2 (SPRINT-2) trial[6], patients showing a decrease in HCV viral load ≥ 1 log10 IU/mL during the four-week lead-in period of peginterferon plus ribavirin therapy had very low rates of emergence of boceprevir-resistant mutants (4%-6%) during subsequent triple therapy, whereas those with a < 1 log10 IU/mL decrease in HCV RNA had higher rates (40%-52%) of boceprevir-resistance-associated variants (genotypic mutations of the protease conferring reduced sensitivity to boceprevir). The majority of boceprevir-treated subjects not achieving SVR had one or more specific treatment-emergent NS3 amino acid substitutions, most of which were previously shown to reduce the anti-HCV activity of boceprevir. These substitutions included V36A, V36M, T54A, T54S, V55A, V107I, R155K, A156S, A156T, A156V, V158I, D168N, I/V170A, and I/V170T. Detection of these substitutions was most common among subjects who experienced virologic breakthrough or incomplete virologic response[68].

COMBINATIONS OF DAAS FOR HCV STRAINS WITH RESISTANCE MUTATIONS

Protease inhibitors are used in combination with peginterferon plus ribavirin because monotherapy with protease inhibitors results in the early emergence of drug-resistance mutations[62,63]. As peginterferon plus ribavirin treatment is frequently associated with serious adverse events, an interferon-free DAA combination therapy such as protease inhibitors with an NS5A inhibitor and/or NS5B inhibitor would offer an ideal treatment option for patients with chronic HCV infection. However, combinations of DAA-resistant variants both in a single target protein and across multiple targets have been reported following failure of single and combination DAA regimens[55,69-71]. HCV population sequences of the complete HCV NS3 and 4A regions obtained from 2,111 HCV subgenotype 1a and HCV subgenotype 1b DAA-naïve patients were analyzed by Bartels et al[72]. It was reported that the strongest association was the combination of variants at NS3 V55, with lower-level resistance to boceprevir, and NS3 T54, with lower-level resistance to boceprevir and telaprevir[73]. The complete HCV NS3 study dataset showed that 69% (33/48) of patients with HCV NS3 V55I also had T54S. An association was also observed between HCV NS3 positions 54 and 155, with 17% (3/18) of the patients with the HCV NS3 T54S substitution also having R155K. The HCV NS3 T54S and R155K combination appeared in boceprevir and telaprevir trials. The study[73] also reported that treatment-naïve patients with viral populations containing the telaprevir-resistant variants HCV NS3 V36M, T54S or R155K at baseline achieved a 74% SVR rate with DAAs, similar to that (76%) in patients without resistant variants detected prior to treatment. Further studies are needed to confirm these findings.