Intramural duodenal hematoma is a rare cause of a proximal gastrointestinal tract obstruction. Presentation of intramural duodenal hematoma most often occurs following blunt abdominal trauma in children, but spontaneous non-traumatic cases have been linked to anticoagulant therapy, pancreatitis, malignancy, vasculitis and endoscopy. We report an unusual case of spontaneous intramural duodenal hematoma presenting as an intestinal obstruction associated with acute pancreatitis in a patient with established von Willebrand disease, type 2B. The patient presented with abrupt onset of abdominal pain, nausea, and vomiting. Computed tomography imaging identified an intramural duodenal mass consistent with blood measuring 4.7 cm × 8.7 cm in the second portion of the duodenum abutting on the head of the pancreas. Serum lipase was 3828 units/L. Patient was managed conservatively with bowel rest, continuous nasogastric decompression, total parenteral nutrition, recombinant factor VIII (humateP) and transfusion. Symptoms resolved over the course of the hospitalization. This case highlights an important complication of an inherited coagulopathy.

Core tip: Spontaneous non-traumatic duodenal hematoma has been linked to coagulopathy, but this case includes a rare form of coagulopathy in von Willebrand type 2B. Early identification with computed tomography imaging and treatment of the coagulopathy aided the usage of conservative therapy which allowed the patient to avoid surgical intervention consistent with prior successful cases of duodenal hematomas.

Computed tomography (CT) of the abdomen without contrast revealed a hyperdense mass in the second and third portions of the duodenum measuring 4.7 cm× 8.7 cm with associated retroperitoneal hemorrhage, extending from the right anterior pararenal space to the right pelvic sidewall. The duodenal mass resembled a hematoma and was abutting the pancreatic head to the left. Liver, spleen, adrenal glands and genitourinary organs were normal. The findings led to a diagnosis of intramural duodenal hematoma complicated by acute pancreatitis (Figure 1).

Figure 1 Axial image (A) and coronal image (B) from abdominal computed tomography with contrast depicts the intramural hematoma as it compresses the head of the pancreas and its’ associated hemorrhage as it extends into the retroperitoneum (arrows).

The patient was transfused one unit of single donor platelets and administered human antihemophilic factor/von Willebrand factor complex (Humate P®) 80 Units/kg prior to transfer from outside facility. A nasogastric (NG) tube was placed, and intravenous bolus of three liters of normal saline was given. Surgery consultation was obtained. He received factor replacement therapy (Humate P® 40 units/kg every 12 h) for the next 72 h, following an initial loading bolus.

Esophagogastroduodenoscopy and endoscopic ultrasound were delayed until day eleven of the hospitalization due to potential risk for hemorrhage from the hematoma during endoscopy. Endoscopy showed a near complete obstruction in the second portion of the duodenum with large amount of gastric fluid (Figures 2 and 3). The patient was discharged to home on day 15 of hospitalization after patient’s pain receded, repeat imaging noted unchanged duodenal and retroperitoneal hematoma and resolution of gastric outlet obstruction. The patient was readmitted to the hospital the following day with worsening abdominal pain with development of nausea and vomiting. On readmission a repeat abdominal CT was performed due to concern of enlargement and extravasation of the hematoma. Imaging revealed a minute increase in size of the duodenal hematoma that measured 5.3 cm × 5.8 cm (previously 5.3 cm × 5.2 cm) in the AP and transverse dimensions and persistent retroperitoneal hematoma. After control of the patient’s symptoms and his ability to tolerate a modified and limited oral diet the patient was finally discharged home on day 23 of the second hospitalization. Following discharge the patient had not experienced return of abdominal pain, nausea and vomiting. Patient was able to tolerate a full diet and total parenteral nutrition (TPN) was discontinued shortly after discharge. Abdominal CT performed at day 68 from presentation revealed decreased size of the duodenal hematoma with measurements of 2.1 cm × 2.6 cm (initially 4.7 cm × 8.7 cm). 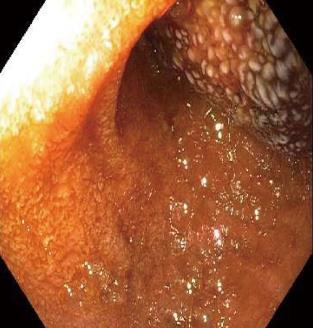 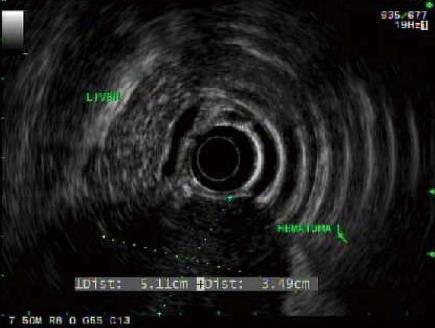 McLachlan described the first published report of duodenal hematoma in 1838 as a false aneurismal tumor[5]. Decades later, the first case of a non-traumatic intramural hematoma was reported by Sutherland in a child with Henoch-Schonlein purpura that presented as intussusception.

Common signs and symptoms on presentation typically include abdominal pain that ranges from vague abdominal complaints to intestinal tract obstruction with vomiting and tenderness mimicking an acute abdomen[7]. Abbas noted that most of the patients presented after having symptoms for several days[7]. Other infrequent signs and symptoms include jaundice and right upper quadrant tenderness due to bile duct obstruction secondary to compression by the hematoma[8]. In this case, the patient’s elevated lipase identified pancreatitis induced by the hematoma as opposed to the case of Bellens et al[9] in which pancreatitis was the inciting event.

The location of the hemorrhage in spontaneous non-traumatic intraluminal hematoma is submucosal and originates from a small vessel[7]. In our case, based upon the imaging findings, the bleeding originated from the gastroduodenal artery. Extravasation of submucosal hematomas can occur into intraluminal, intra-mesenteric, and retroperitoneal sites[7]. Whereas traumatic small-bowel hematomas commonly affect the duodenum, most spontaneous small-bowel hematomas involve the jejunum[7,10]. Additionally, Abbas noted that no spontaneous intramural hematoma was less than 8 cm in length, consistent with our findings of an 8.7 cm length[7].

In recent years, there has been an increase in detection of non-traumatic intramural small bowel hematomas in patients that are anti-coagulated. This increase has also coincided with more sensitive imaging modalities that have led to earlier detection. In general, CT is the imaging choice for diagnosis of spontaneous intramural small bowel hematoma, but as a rapid screening modality, ultrasound can be used effectively during the initial evaluation, as it is inexpensive, rapid, noninvasive and readily available in most instances[5,7]. Characteristic features have been described include circumferential bowel wall thickening, intramural hyperdensity with Hounsfield units characteristic for blood (30-80 H), luminal narrowing and intestinal obstruction[7]. Reassessment of the status of the hematoma is generally recommended with CT in 2 wk following diagnosis and conservative management[8].

In prior case reports, the initial treatment regimen for IDH favored medical management; if feasible in a stable patient, as spontaneous local absorption of the hematoma occurs in most circumstances[5-8]. Conservative management constituted bowel rest, continuous NG decompression, TPN, blood transfusion and correction of coagulopathy. Minimally invasive drainage through image-guided modalities is generally not recommended in consideration to the technical difficulty required to access the precarious location of the pathology as well as the risk for bowel perforation[8]. Complete resolution of the hematoma and healing of the intestine usually occurs within 2 mo after diagnosis in cases of non-extensive hematomas[5,7]. Surgical intervention is only indicated if there is significant intraluminal hemorrhage, bowel perforation or identifiable risk of ischemia[4,5,7]. Surgical evacuation of the hematoma through laparotomy or laparoscopy tends to be the best surgical treatment in these situations, specifically in instances in which the abdominal pain or obstruction did not resolve and objective findings of bowel infarction were present[11-13]. Limited case reports have detailed successful outcomes with percutaneous aspiration and endoscopic dilation[4,14,15]. Finally, bypass surgery is reserved for patients with severe duodenal perforation and multiple comorbidities precluding resectional surgery[8].

Our case highlights a rare but important complication of coagulopathy. Acute abdominal pain with signs and symptoms of obstruction in patients with coagulopathy should raise suspicion for spontaneous intramural small-bowel hematoma. Prompt diagnosis with CT imaging is a crucial contribution to patient treatment, because conservative medical management can be achieved in most patients. Whereas, in cases of failed conservative medical management surgical intervention is performed.