Esophageo-tracheal fistula is a rare condition, and in most cases such fistulas are caused by malignant disease or emergency endotracheal intubation. A case where a wrapped tablet produced a fistula between the esophagus and trachea is described. The patient is a male born in 1938 who swallowed a tablet without unwrapping it. The patient was treated with self-expanding metal stents (SEMS), but closure of the fistula was not achieved. Different examinations and treatment options are discussed. Surgical treatment for this condition has demonstrated considerable mortality and morbidity. In some cases closure of the fistula can be achieved by use of SEMS. Although we advise treatment of such cases with SEMS, in some cases treatment with stents will prove troublesome and the risk/benefit analysis will have to be reevaluated.

Esophagotracheal fistula is a rare condition, and in most cases such fistulas are caused by malignant disease or emergency endotracheal intubation. We describe a case with a unique etiology where a wrapped tablet produced a fistula between the esophagus and trachea. Challenges in diagnosis and treatment are described.

The patient is a male born in 1938. In 1997 he had prosthetic hip surgery, for which he was re-operated in 2008. Parkinsons disease was diagnosed in 2009, and he suffers from benign prostatic hyperplasia.

In 2008, during hospitalization for the hip-reoperation, he was given four tablets by a staff nurse as ordinated by a physician. Upon swallowing the tablets, the patient felt intense chest discomfort, and it was speculated whether he had swallowed one of the tablets without unwrapping it. No further investigation was done at this point.

In 2010 the patient was referred to the Department of Gastroenterology because of dysphagia.

An upper endoscopy was performed and at 25 cm from the teeth the endoscopist discovered a stenosing process with mucosal “irritation” and signs of ulceration. Biopsies from the area revealed ulceration, but no signs of malignancy. Distally, the esophagus was normal. He had signs of gastritis with a positive Helicobacter pylori-test. The duodenum was normal.

The initial computer tomography (CT) raised suspicion of malignancy, as it described a 4-5 cm tumor of the esophageal wall and adjacent pathological lymph nodes in the mediastinum.

Three weeks later a new endoscopy was performed, and the suspicion of a foreign body was raised. The structure in the esophagus had a blueish discoloration, and the consistency was “hard as a rock”.

The patient was referred to a tertiary centre for possible endoscopic removal of a foreign body but, due to the risk for perforation, instead of trying to remove the foreign body a self-expanding, fully covered esophageal stent was placed. The patient now was able to eat.

Five months later the patient came back after having coughed up a foreign body. He brought the item to the outpatient clinic. Upon inspection it measured 2 cm × 2 cm and the tablet remained intact inside the wrapping (Figure 1). The patient reported chest discomfort, but no respiratory symptoms. Another endoscopy was performed. The stent was in place, and there was no visible fistula. Biopsies showed inflammation and proton pump inhibitor treatment was initiated. 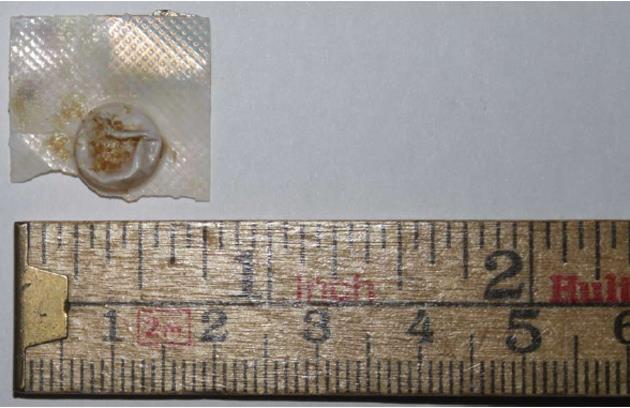 Again a CT was performed, describing fibrotic changes in the right lung, and low-grade brochiectasia. No contrast leakage between the esophagus and the respiratory tract was seen.

The patient was in good health, but felt some discomfort having a stented esophagus. An informed decision was made to attempt stent removal under anaesthesia.

The stent was removed endoscopically, and 15 min after the procedure bleeding from the endotracheal tube was noticed. There was no subcutaneous emphysema. The patient was extubated and was able to breathe normally. The suspicion of a esophago-tracheal fistula was raised and antibiotic therapy was initiated. CT confirmed a fistula, 20 mm × 6-7 mm, at aortic arch level (Figure 2). 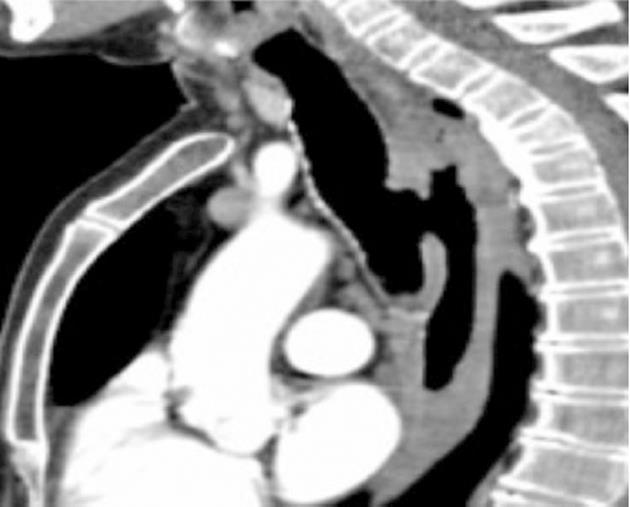 In order to - as far as possible - prevent aspiration from the esophagus to trachea, and to see if a spontanous closure of the fistula was achievable, a percutaneous endoscopic gastrostomy (PEG) was placed. This also ensured nutritional adequacy.

The patient was observed as an outpatient, and attended two control CTs. The fistula persisted unchanged.

After another three months it was decided to place a new esophageal stent. Upon esophagoscopy the fistula still measured 20 mm × 7 mm, and there was direct visability into the carina and the left and right main bronchus. The PEG was removed, and a fully covered, self-expanding stent was placed to cover the fistula. We chose a stent with a diameter of 28 mm at the two ends in an attempt to avoid food/liquids from getting access from the esophagus to the trachea. The length of the stent was 12.5 cm and the diameter in the center of the stent was 23 mm. A bronchoscopy was performed, during which the stent was directly visible from the tracheal side (Figure 3). A CT was performed, showing the stent in place (Figure 4). 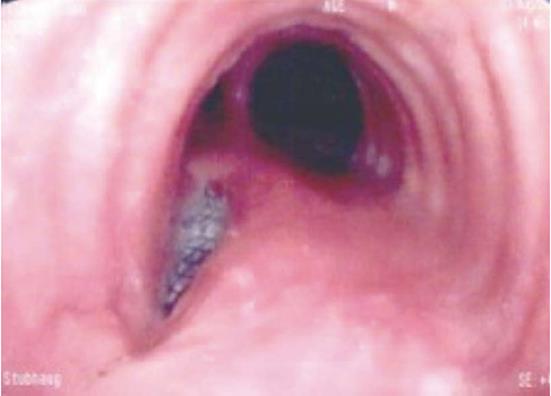 Figure 3 Bronchoscopy was performed, during which the stent was directly visible from the tracheal side. 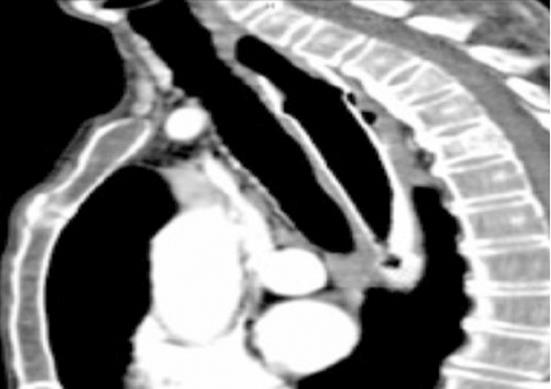 Figure 4 Computed tomography was performed, showing the stent in place.

Two months after the last stent placement the patient is asymptomatic, and is obtaining natural nutrition. A follow-up CT is scheduled.

A report on surgical correction in two cases of iatrogenic esophago-tracheal fistulas is available[1]. These fistulas were secondary to traumatic emergency endotracheal intubation. Another report on four patients with iatrogenic fistulas demonstrated considerable mortality and morbidity in relation to emergent surgery[2]. Two patients were under long term treatment in the ICU, one suffered a stroke, and one died. A study on four patients with esophago-tracheal fistula being treated with self-expanding oesophageal stents reported fistula closure in two patients[3]. A review on surgical techniques is available[4], outlining the invasiveness of the procedures. Management of an iatrogenic tracheo-esophageal fistula using a Y-stent on the tracheal side is described[5]. A self-expanding metal stent is, according to one study, safe and effective in palliation of malignant fistulae in selected patients[6]. However, this study was conducted on 90 patients with malignant changes in the esophagus, of which only 5 patients had a fistula.

Our case illustrates a unique etiology of an esophago-tracheal fistula. The patient presents a continuous challenge in treatment. Discussions and considerations with thoracic surgeons have so far concluded with stenting as the treatment of choice. The patient’s age and comorbidity is being taken into account in this decision. However, if the management with esophageal stents proves troublesome, the risk/benefit analysis will have to be re-evaluated.

The wrapped tablet was forced from the esophageal wall to the trachea, probably powered by the self-expanding stent. Long-term stenting has so far given no reduction in the size of the defect.