AIM: To explore the alteration of tyrosine phosphatase SHP-2 protein expression in gastric cancer and to assess its prognostic values.

METHODS: Three hundred and five consecutive cases of gastric cancer were enrolled into this study. SHP-2 expression was carried out in 305 gastric cancer specimens, of which 83 were paired adjacent normal gastric mucus samples, using a tissue microarray immunohistochemical method. Correlations were analyzed between expression levels of SHP-2 protein and tumor parameters or clinical outcomes. Serum anti-Helicobacter pylori (H. pylori) immunoglobulin G was detected with enzyme-linked immunosorbent assay. Cox proportional hazards model was used to evaluate prognostic values by compassion of the expression levels of SHP-2 and disease-specific survivals in patients.

RESULTS: SHP-2 staining was found diffuse mainly in the cytoplasm and the weak staining was also observed in the nucleus in gastric mucosa cells. Thirty-two point five percent of normal epithelial specimen and 62.6% of gastric cancer specimen were identified to stain with SHP-2 antibody positively (P < 0.001). Though SHP-2 staining intensities were stronger in the H. pylori (+) group than in the H. pylori (-) group, no statistically significant difference was found in the expression levels of SHP-2 between H. pylori (+) and H. pylori (-) gastric cancer (P = 0.40). The SHP-2 expression in gastric cancer was not significantly associated with cancer stages, lymph node metastases, and distant metastasis of the tumors (P = 0.34, P = 0.17, P = 0.52). Multivariate analysis demonstrated no correlation between SHP-2 expression and disease-free survival (P = 0.86).

Gastric cancer remains the fourth most commonly diagnosed cancer and is the second leading cause of cancer related deaths worldwide[1]. The SHP-2 tyrosine posphatase encoded by tyrosine phosphatase SHP-2 (PTPN11) is an evolutionarily conserved protein, containing two Src homology domains at the N terminus, a central catalytic domain, and a C-terminal tail[2,3]. SHP-2 positively regulates many signaling pathways, such as insulin, epidermal growth factor, platelet-derived growth factor, fibroblast growth factor, interleukin (IL)-1, and IL-6[4-6]. SHP-2 has been identified as an essential component in several oncogenic signaling pathways. Elucidation of the events underlying SHP-2-evoked transformation may provide new insights into oncogenic mechanisms and novel targets for anti-cancer therapy[7-11]. Meanwhile, infection with Helicobacter pylori (H. pylori) is the leading cause for developing atrophic gastritis and gastric cancer worldwide. Many studies reveal that strains of H. pylori carrying the major protein virulence factor, cytotoxin-associated antigen A (CagA), are associated with increased risks of gastric cancer compared to strains of H. pylori lacking CagA[12]. H. pylori inject CagA protein into gastric epithelial cells via the bacterial type IV secretion system and then CagA localizes to the cell membrane and aberrantly activates SHP-2 and its downstream effectors. However, little effort has been devoted to assess an association of the expression level of SHP-2 with gastric cancer risk[13-15]. To investigate the relationship between H. pylori infection and SHP-2 protein production in gastric cancer, the SHP-2 protein expression was investigated in 305 patients with gastric cancer, and paired adjacent normal tissue samples were collected in 83 patients. Associations of the protein expression with patient clinical characteristics and prognostic values were also explored in this study.

Three hundred and five consecutive cases of gastric cancer were enrolled in the study. The patient did not receive any treatment before the surgical operation. Gastric cancers were removed by surgical excisions. Adjacent normal gastric epithelial samples were also collected from 83 patients for comparison. Patient ages ranged from 32 to 87 years, with a median age of 64 years. The diagnosis of gastric cancer was confirmed by two pathologists (Jin MS, Wang YP) independently at First Hospital of Jilin University. Written informed consent was obtained from each patient and the study protocol was approved by the Ethics Committee of the First Hospital of Jilin University.

The section (4 μm in width) of the archival paraffin-embedded block was excised, deparaffinized and stained using a streptavidin-biotin immunoperoxidase technique. The primary antibody, anti-SHP-2 monoclonal antibody (Santa Cruz Biotec, United States), was used in 1:500 dilution; and 3, 3-diaminobenzidine was employed as a chromogen. The section was counterstained with hematoxylin. The stained slides were evaluated by two independent pathologists (Jin MS, Wang YP), who were blinded to the clinical data. The widely accepted H-score system was used to assess staining intensity and percentage of the cells stained with a specific magnitude of intensity. The H-score was calculated with the following equation: H-score = ∑Pi (i) (i = 0, 1, 2, 3, Pi = 0%-100%), where i means the intensity of staining, 0 = no staining, 1 = weak staining, 2 = moderate staining and 3 = strong staining. and Pi represents percentages of stained cells with intensities varying from 0% to 100%. Therefore, the H-score ranged from 0 to 300. The H-score ≥ 100 is considered as positive staining and < 100 is considered as negative staining.

Among 305 gastric cancer patients, blood samples were collected from 100 patients for the examination of H. pylori infection before the surgical operation. Four mL of fasting blood samples were left at room temperature for 30 min and the centrifuged. The serum was drawn and stored at a -80 °C freezer. Serum immunoglobulin G (IgG) antibodies to H. pylori were detected by H. pylori-IgG enzyme-linked immunosorbent assay kit (Biohit, Helsink, Finland). The antibody titers were defined by optical density values according to the manufacturer’s protocol, and titers higher than the cut off value of 30EIU were considered as positive for H. pylori infection. The kit quality control samples showed CVs of 4.5% for H. pylori infection examination.

SHP-2 staining was found diffuse mainly in the cytoplasm and the weak staining was also observed in the nucleus (Figure 1). SHP-2 positive staining was found in 62/83 (62.6%) gastric cancer samples and in basal cells of 27/83 (32.5%) normal mucosal samples, respectively. There was a significantly increased rate of SHP-2 positive expression in gastric cancer compared to the normal mucosa (P < 0.001). In addition, the results showed statistically significant difference in the median H-score of SHP-2 expression between the cancer lesion and normal mucosa (160 vs 20, P < 0.001; Table 1).

Statistically, the SHP-2 expression in gastric cancer was not associated with the tumor stage, lymph node metastasis and distant metastasis of the tumors (P = 0.34, P = 0.17, P = 0.52). Kaplan-Meier survival curve was plotted for the 305 patients according to H-score of SHP-2, the overall survival rates of the four groups was not significantly different (log rank test, P = 0.86; Figure 2). In addition, the multivariate analysis did not demonstrate an association between SHP-2 expression and disease specific death. There were no differences of SHP-2 levels, age, sex, tumor differentiation, lymph-vascular invasion, TNM staging and survival time between subgroups (83 and 100 cases) and total subjects. The clinical characteristics of subjects are summarized in Tables 2 and 3. 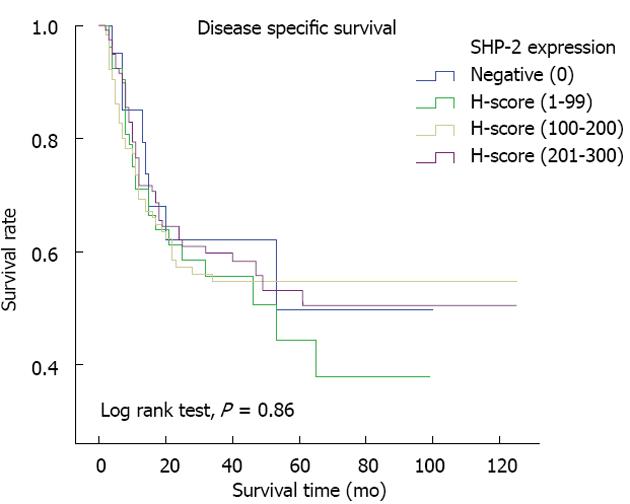 Tyrosine phosphorylation and dephosphorylation are coordinated by tyrosine kinases and phosphatases. Recently, SHP-2 has been identified to play a vital role in the pathogenesis of human cancers[10,16,17]. Over-expressions of SHP-2 were reported in infiltrating ductal carcinomas of breast and in gastric cancers as well,[16,18] suggesting that the up-regulation of SHP-2 protein is involved in developing these cancers. In addition, the SHP-2 expression in breast cancers was positively correlated with lymph node metastases and tumor grades, implying that SHP-2 expression is associated with the progression of breast cancers[16]. By contrast, SHP-2 expression in gastric cancers was not found to be associated with lymph node metastases, neither tumor grades in our study (Table 2). The down-regulation in SHP-2 expression was identified to be a better prognostic marker in patients with hepatocellular carcinoma, indicating that SHP-2 plays a role in the tissue specific manner[10].

H. pylori is a group I carcinogen according to the World Health Organization and International Agency for Research on Cancer[23]. It has been generally accepted that gastric cancer is a multistep process involving a series of events such as atrophic gastritis, intestinal metaplasia, dysplasia and carcinoma. Several studies demonstrated that CagA molecules tethered to the inner surface of plasma membrane of gastric epithelial cells, where they are tyrosine phosphorylated[14,24-26]. SHP-2 is specifically bound by tyrosine phosphorylated CagA, which provokes RAS- and extracellular signal-regulated kinase-dependent signaling cascades. The deregulation of SHP-2 signal transductions leads to loss of epithelial cell polarity, manifested by cell elongation and increased motility, that has been considered to be an important mechanism by which CagA-positive H. pylori promotes gastric carcinogenesis[14]. Recently, we reported that rs12423190 polymorphism of the PTPN11 gene (encoding SHP-2 protein) is significantly associated with an increased risk of gastric atrophy in H. pylori infection[27]. To the best of our knowledge, the present study is the first clinical evaluation of SHP-2 expression levels and H. pylori infection in gastric cancer. Although SHP-2 expression level was higher in the H. pylori (+) group of gastric cancer compared to the H. pylori (-) group, no statistical difference was found (76.1% vs 66.6%, P = 0.40).

In conclusion, we demonstrated that SHP-2 is over-expressed in gastric cancer. However, the level of SHP2 expression was associated with neither H. pylori infection nor prognosis of the tumor. Targeting SHP-2 might lead to development of a novel treatment for gastric cancer. The precise mechanisms underlying the effect of SHP-2 on gastric carcinogenesis remains to be further investigated[28-31].

The authors would like to thank those who participated in this study, and particularly thank Mr. Chang-Song Guo and Ms. Ying Song for their technical supports.

Gastric cancer remains the second leading cause of cancer-related deaths worldwide. Recently, SHP-2 has been identified to play a vital role in the pathogenesis of human cancers.

SHP-2 has been identified as an essential component of several oncogenic signaling pathways. Mutation in SHP-2 has been confirmed in several types of solid tumors. Elucidation of the events underlying SHP-2-evoked transformation may provide new insights into the novel targets for anti-cancer therapy.

The present study is the first clinical evaluation of SHP-2 expression levels and Helicobacter pylori infection in gastric cancer patients.

Targeting SHP-2 might lead to development of a novel treatment for gastric cancer in the future, such as SHP-2 inhibitors.

The authors showed that SHP-2 expression was higher in cancer specimen compared with normal specimen. However, no association was found between SHP-2 and other clinical parameters.