When a distal common bile duct neoplasm is at the stage of carcinoma in situ or high-grade dysplasia, it is difficult for the surgeon to decide whether to perform pancreaticoduodenectomy. Here we describe a patient with a progressive dysplastic lesion in the common bile duct, which developed from moderate-high to high-grade dysplasia in approximately 2 mo. The patient refused major surgery. Therefore, endoscopic-assisted photodynamic therapy was performed. The result at follow-up using a trans-T-tube choledochoscope showed that the lesion was completely necrotic. This report is the first to describe the successful treatment of high-grade dysplasia of the distal bile duct using photodynamic therapy via a choledochoscope.

Endoscopic treatment is an alternative treatment option with low morbidity. Premalignant lesions such as high-grade dysplasia are being treated increasingly via endoscopy. Furthermore, as a promising clinical protocol, endoscopic-assisted photodynamic therapy may result in a more precise effect due to its selective damage to tumor cells. Saleem et al[1] reported successful photodynamic treatment (PDT) via endoscopic retrograde cholangiopancreatography (ERCP) for a villous adenoma with high-grade dysplasia. Here we report a unique case of progressive dysplasia in the distal common bile duct, which developed from moderate-high to high-grade dysplasia in approximately 2 mo, and was successfully treated by PDT via a choledochoscope. 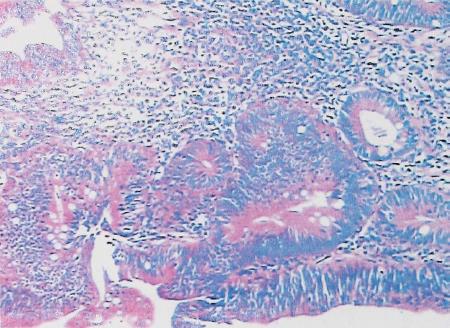 Choledochoscopy showed the same easily bleeding lesion as before (Figure 2A), and a second endoscopic biopsy revealed villous adenoma-like epithelia with moderate-high dysplasia and focal high-grade dysplasia. A trans-T-tube cholangiogram was performed, which demonstrated a dilated biliary tree with an irregular filling defect in the distal common bile duct (Figure 3). 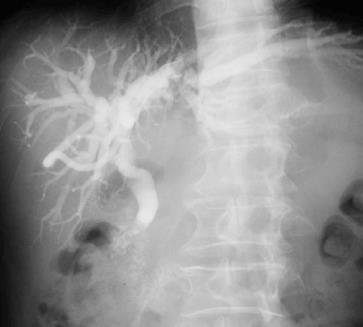 The patient refused major surgery. Therefore, endoscopic-assisted PDT was performed. Informed consent was obtained from the patient prior to PDT. Hematoporphyrin (5 mg/kg) was administered intravenously 48 h before PDT. According to the surgical record and a previous computer tomography (CT) scan, we performed PDT through the T-tube sinus tract using a 4-cm long, cylindrical light diffuser at a power output of 250 mW/cm2 in one application for a total dose of 70 J/cm2. This covered the whole distal common bile duct area. We noticed that the lesion became purple soon after light irradiation (Figure 2B). The patient felt well after the procedure and was discharged the next day.

Tumors of the distal common bile duct present a serious surgical problem because they necessitate a complicated and extensive resection. Pancreaticoduodenectomy (the Whipple procedure) is one of the most difficult procedures in general surgery, but should only be considered if the tumor is locally contained when identified. However, these small lesions tend to present late in the disease course, and many are unresectable[2]. Unfortunately, these lesions are not sensitive to chemotherapy or radiotherapy. In addition, studies have shown that intrahepatic bile duct hyperplasia is a potent precursor of cholangiocellular carcinoma. Livers with cholangiocellular carcinoma are closely associated with atypical hyperplasia and carcinoma in situ[3]. Therefore, when they are at the stage of carcinoma in situ or high-grade dysplasia, a new set of management dilemmas occur with regard to major surgery.

With more attention being paid to earlier detection and more careful pathological assessment, these previously overlooked histological features are attracting more interest not only in the diagnosis but also in the treatment.

Endoscopic surgery is an alternative treatment option with low morbidity in many cases[4]. Endoscopic-assisted photodynamic therapy is a promising method for lesions in the biliary tree due to the thickness of the bile duct wall being within the penetration depth of the light. PDT can be regarded as a standard palliative therapy for unresectable cholangiocarcinoma as reported in previous studies[5]. In our case, it demonstrated high selectivity for the dysplastic lesion, and did not damage the duodenal papilla. This indicates the potential for endoscope-assisted PDT to provide precise ablation of intraductal lesions with progressive dysplasia. This protocol may serve as a standard modality for patients who are not candidates for surgery, and the T-tube sinus provides a good tract for both treatment and follow-up.

We want to thank our colleagues from the Department of Digestive Endoscopy for providing the pictures taken via a choledochoscope.