METHODS: Twelve patients (6 men and 6 women) aged 53-64 years (mean age, 58 years) who underwent regular examination 3-12 mo after esophageal ESD for neoplasms of the esophageal body were included in this study. The ESD procedure was performed under deep sedation using a combination of propofol and fentanyl, and involved a submucosal injection to lift the lesion and use of a dual-knife and an insulated-tip knife to create a circumferential incision around the lesion extending into the submucosa. Esophageal motility was examined using a high-resolution manometry system. Dysphagia was graded using a five-point scale according to the Mellow and Pinkas scoring system. Patient symptoms and the results of esophageal manometry were then analyzed.

CONCLUSION: Extensive esophageal ESD may cause esophageal dysmotility in some patients, and might also have an influence on dysphagia although without esophageal stricture.

Core tip: Endoscopic submucosal dissection (ESD) is widely used to treat esophageal epithelial neoplasms. ESD has the advantage over esophagectomy of being less invasive and having lower postoperative morbidity. ESD also has the advantage over endoscopic mucosal resection of enabling the removal of larger epithelial neoplasms in an en bloc manner for complete resection. It is not known whether esophageal ESD affects esophageal motility. Therefore, the present study aimed to evaluate the effects of ESD on esophageal motility.

Endoscopic submucosal dissection (ESD) is widely used to treat esophageal epithelial neoplasms[1-3]. ESD has the advantage over esophagectomy of being less invasive and having lower postoperative morbidity[4-6]. ESD also has the advantage over endoscopic mucosal resection (EMR) of enabling the removal of larger epithelial neoplasms in an en bloc manner for complete resection[7-9]. Some postoperative complications such as bleeding and perforation may occur, but can be minimized by the development of the endoscopist’s skill and the use of advanced equipment[10,11]. Postoperative stricture is a major complication of ESD due to the increase in the scope of ESD resection, which can result in dysphagia and thus affect patients’ quality of life. Some studies have found that more than 3/4 of the circumference of esophageal ESD has a high risk of esophageal stricture[12,13]. Post-ESD stricture can be prevented with repeated endoscopic balloon dilation and oral prednisolone[14,15].

In addition, dysphagia is not always related to esophageal stricture and motility abnormalities also play an important role[16-19]. Some patients undergoing esophageal ESD at our center complained of sporadic dysphagia without postoperative esophageal stricture, especially when swallowing a large mass of food. This observation has raised concerns that sporadic dysphagia in these patients may be due to postoperative esophageal dysmotility. Moreover, the healing of an ESD-induced iatrogenic esophageal ulcer is also involved in destruction and fibrosis of the muscularis propria[20]. It is not known whether esophageal ESD affects esophageal motility. Therefore, the present study aimed to evaluate the effects of ESD on esophageal motility.

Twelve patients (6 men, 6 women; mean age, 58 years; range, 53-64 years) examined between 3 and 12 mo after ESD for neoplasms of the esophageal body at the Chinese PLA General Hospital were included in this study. Clinicopathological data of the patients are shown in Table 1. After written informed consent was obtained, data on dysphagia were collected by questionnaire and all patients underwent esophageal manometry.

The ESD procedure was performed in a standardized way under deep sedation using a combination of propofol and fentanyl. Patients were continuously monitored by electrocardiography. The margins of the lesion were marked by electrocautery (30 W soft coagulation) to determine the resection border. A submucosal injection was then performed to lift the lesion. When the lesion was lifted sufficiently, a dual-knife and insulated-tip knife were used to create a circumferential incision around the lesion extending into the submucosa and a submucosal dissection was performed to remove the lesion in an en bloc fashion.

Assessment of esophageal motility was performed using a high-resolution manometry system with 36 channels spaced at 1 cm intervals (outer diameter 4.2 mm) (Sierra Scientific Instruments, Los Angeles, CA, United States). This system can automatically capture esophageal motor function from the pharynx to the stomach with a single placement of the catheter.

Esophageal manometry was performed after fasting for at least 6 h, and the high-resolution catheter was passed transnasally, positioned 2 cm below the lower esophageal sphincter (LES) and then fixed in place by taping it to the nose. The upper esophageal sphincter and LES were located using a real-time pressure monitor. The protocol included a 5-min period to assess basal sphincter pressure and then ten swallows of water (5 mL each swallow) in the supine position[22]. All swallows and pressure measurements were analyzed by Manoview Analysis Software (Sierra Scientific Instruments, United States).

Esophageal manometry showed that of the 6 patients with above semi-circumference of resection extension, 5 patients had low esophageal body pressure, including four patients with low mean esophageal body pressure and one with low pressure at an interval of 3 cm below the LES (Table 1). Of these 5 patients, 1 patient (with post-ESD esophageal stricture) complained of grade 2 dysphagia, 1 patient (without post-ESD esophageal stricture) complained of grade 1 dysphagia and 3 patients complained of sporadic dysphagia. Segmental simultaneous wave was observed in ESD scar site in 4 of these 5 patients, and wave amplitude was significant decreased (Figure 1). 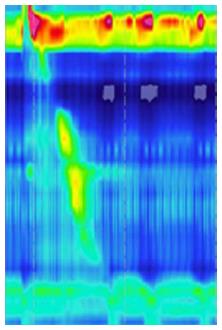 ESD is a feasible method for treating early esophageal epithelial neoplasms, and was developed for en bloc and complete resection of large esophageal epithelial neoplasms, to allow precise histological assessment of specimens excised in one piece with tumor-free lateral/basal margins and to reduce residual disease and local recurrence[1-3]. With the increase in the scope of esophageal ESD resection, postoperative esophageal stricture and dysphagia are major complications during long-term follow-up, and require repetitive endoscopic balloon dilatation which severely affects patient quality of life. More than 3/4 of the circumference of esophageal ESD is a significant cause of postoperative esophageal stricture[12,13]. Ono et al[10] reported that post-ESD stricture with dysphagia was successfully managed with repeated endoscopic balloon dilation in a median of 2 sessions.

Honda et al[23] found that in a dog model, mucosal defects after EMR were associated with inflammation and although the muscularis propria appeared not to have been damaged by the EMR procedure, myofiber atrophy was found to develop after the first postoperative week, eventually leading to fibrosis. Ota et al[20] found that an artificial ulcer after esophageal EMR/ESD in humans had a similar healing time to that in dogs. Kahrilas et al[24] reported an increased proportion of failed primary peristalsis and a reduction in peristalsis amplitude in peptic esophagitis. Singh et al[25] found a reduction in peristaltic amplitude after healing of esophagitis. Malhi-Chowla et al[19] found that photodynamic therapy may worsen esophageal motility in some patients with esophageal adenocarcinoma and Barrett’s esophagus or Barrett’s esophagus with high-grade dysplasia. Esophageal dysmotility resulting from photodynamic therapy or caustic esophageal burns is due to muscularis propria destruction. Bautista et al[16] found that caustic esophageal burns can also result in esophageal dysmotility without stricture. McDougall et al[26] found that there was no improvement in esophageal motility after healing of esophagitis, and they suggested that there was either a primary motility problem, or that reflux damage caused irreversible impairment of motility which failed to recover when the mucosa healed. Healing of post-ESD esophageal ulcer is a similar process to that in caustic esophageal burns and photodynamic therapy. It is not known whether esophageal ESD affects esophageal motility.

In the present study, ineffective esophageal body motility was observed in 5 of 6 patients with above semi-circumference of resection extension. Segmental simultaneous wave was observed in ESD scar site in 4 of these 5 patients, and wave amplitude was significant decreased. These results showed that extensive esophageal ESD might have an effect on esophageal motility. These were some observed phenomenon, and further research was needed to confirm.

The study involved testing the esophageal motility after esophageal ESD and analyzing the relation of esophageal dysmotility and extension of ESD.