CONCLUSION: With the help of technological improvements, we may use enteroscopy as a safe modality more frequently in younger and smaller children.

Core tip: Small bowel diseases are encountered frequently in adults and children. For diagnosing small bowel disease, endoscopy, barium series, ultrasound, and computed tomography methods were used before advanced techniques such as capsule endoscopy and double balloon enteroscopy (DBE). Many centers began to use DBE widely in adults and children. Interventional procedures of DBE in children are also as safe as in adult patients. Although a small number of children were included in the present study, this is believed to be the first comparison of DBE in adult and pediatric patients.

Considerable progress has been made in the area of diagnostic or therapeutic endoscopic interventions since Hirschowitz et al introduced the fiberoptic endoscope in 1950[1]. Endoscopic imaging of the whole small intestine is more difficult than the colon due to its length, free mobility and tortuosity within the abdominal cavity. Capsule endoscopy (CE) is one of the latest techniques, and provides single pass visualization of the intestines but without biopsy or therapeutic capabilities. Small bowel diseases are common in children and adults. However, surgical approaches were the first choice for diagnostic and therapeutic applications before using techniques like CE and double balloon enteroscopy (DBE). DBE provides significant progress in diagnosis and management of small intestinal diseases. The diagnostic and therapeutic benefits of DBE in adults are well documented and DBE is widely used in many centers. Although DBE is a safe method in adults, its use in children was limited to case reports, which were followed by center reports about the DBE experience[2-6].

In the present study, we report our preliminary comparison of DBE in pediatric and adult patients, focusing on the evolving indications, limitations, associated risks, and complications of this endoscopic therapeutic technique, in the setting of a tertiary care referral center.

DBE included a complete small bowel enteroscope, an overtube, balloons and a special air pump. The Fujinon EN-450T5 DBE system (Tokyo, Japan) used a 200-cm working length enteroscope with an outer diameter of 8.5 and 2.8-mm working channel. The flexible overtube had a length of 140 cm and outer diameter of 12 mm. The enteroscope and overtube had balloons fitted at the distal tip. An air pressure controlled pump system had a maximum inflatable pressure of 45 mmHg. For oral DBE procedures, there was no difference in preprocedural preparation of adult and pediatric patients and overnight fasting of at least 6 h prior to the start of the procedure was adequate. Bowel cleansing was performed by oral administration of sennosides A and B solution, 2 mL/kg, and anal saline laxative enema. DBE procedures were performed in an operating room under general anesthesia by two endoscopists. The patients were followed up for 2 h after the procedure to assess possible complications.

Information about the DBE procedure, including its requirements and potential complications, were explained to all adult patients and parents of the children before the procedure. Informed consent was obtained from all the participants.

Diagnosis was made by enteroscopy, evaluation of biopsy or surgical material, or clinical and laboratory data. Results were as follows: diffuse gastric angiodysplasia (n = 1); diffuse jejunal angiodysplasia (n = 1); ulceration in the bulbus (n = 1); scalloping of the folds in the bulbus and bowel mucosa compatible with celiac disease (n = 3); ulceration crater in the jejunum with 8-9 mm diameter covered with white exudate (low differentiated metastatic carcinoma, n = 1); polyps (3 patients with Peutz-Jeghers syndrome and 1 with adenomatous polyp); and stricture formation in anastomosis line (n = 1) (Table 2). In 23 patients, monitoring of the small bowel mucosa throughout the process was normal. Demographic characteristics of pediatric patients are given in Table 3.

Small bowel diseases are encountered frequently in adults and children. For diagnosing small bowel disease, endoscopy, barium series, ultrasound, computed tomography (CT) methods were used before advanced techniques such as CE and DBE. Segments of the small intestine that cannot be reached are now viewed via DBE and progress has been made in diagnosis and treatment of lesions in this region. Although a small number of children were included in the present study, this is believed to be the first comparison of DBE in pediatric and adult patients. Demographic characteristics of pediatric patients.

Analyzing pediatric patients, patient 1 had abdominal pain and diarrhea whereas patients 4 and 5 had abdominal pain only. In all three patients acute phase reactants and leukocyte count were normal and stools were negative for blood. There were no pathological imaging signs and endoscopic and colonoscopic examinations were considered as normal. Abdominal pain was the most common indication for enteroscopy in our limited number of pediatric patients. Evaluating the adult group of patients, abdominal pain constituted the most common indication for enteroscopy, with 11 patients (33%). Reviewing the literature for adult enteroscopy, Pata et al[7] reported that obscure bleeding constituted the major indication, with 42.1%, whereas abdominal pain ranked last with 9.47%. He et al [8] reported that abdominal pain with 15 patients (25.4%) ranked second below melena with 36 patients (61.01%) as the major indications. In our adult series, three of the 11 patients with abdominal pain had special features. Stool examinations of all three patients were normal. Endoscopic and colonoscopic examinations did not reveal any clear pathological sign. However, due to visualization of local irregularities and scalloping in jejunal bowel mucosa in some areas, celiac serology was performed and biopsy results were compatible with celiac disease.

In our study, four patients had polyps and resections were done. Patient 2 was being followed for Peutz-Jeghers syndrome in a different center and was referred to our department due to development of ileus symptoms. In abdominal CT scans, a mass of 3 cm × 2.5 cm was noted. Enteroscopy was performed and a giant three-leaf-clover-shaped polyp completely filling the intestinal lumen was seen (Figure 1). Complete resection was done without postprocedural complications. Patient 3 was also being followed for Peutz-Jeghers syndrome and prominent anemia. The patient was positive for occult blood in stool examination. During endoscopy, a jejunal polyp was seen in an area that was out of reach. Polypectomy was performed with the help of an enteroscope without any complications. 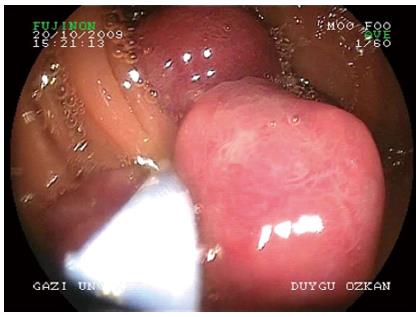 Enteroscopy was performed in one adult patient who had Peutz-Jeghers syndrome in childhood due to anemia and recurrent abdominal pain. Polypectomy was performed for multiple polyps with the help of an enteroscope, without any complications. One adult patient being investigated for anemia with normal endoscopy and colonoscopy was referred to our center for enteroscopy. Jejunal polyps were seen and complete resection was performed without any complications. Biopsies were found to be compatible with adenomatous polyps.

Yoon et al[14] reported the resection of a giant ileal polyp of 2.5 cm × 2.5 cm via enteroscopy. Miyata et al[15] reported a case of small bowel intussusception due to inflammatory polyps that was preoperatively diagnosed using DBE. Thus, minimal laparoscopic resection could be performed by shortening intussusception. Until recently, primary surgical resection and intraoperative endoscopy were the only available possibilities to treat polyps in the mid-small bowel in patients with polyps. DBE has changed this approach and now it is possible not only perform endoscopic surveillance and diagnose these lesions, but also resect them.

One of our adult patients investigated for abdominal pain and anemia presented with occult blood. Endoscopy and colonoscopy did not reveal any pathological findings. During enteroscopy, an ulceration crater in the jejunum of 8-9 mm diameter covered with white exudate was noted. Biopsy evaluation was reported as low differentiated metastatic carcinoma.

Fry et al[16] reported a relative incidence of 9.6% for small bowel tumors encountered during DBE in a series of 40 patients. Nakatani et al[17] reported 10 years DBE experience with 705 patients. All patients were investigated for obscure gastrointestinal bleeding and 12 intestinal tumors were identified. According to the above mentioned study, detection rates for intestinal tumors with DBE, CE and CT were 92%, 60% and 67%, respectively. Considering adult small bowel tumors, probably one of the major benefits of DBE may be defined as diagnostic and/or therapeutic capability without the need for surgery.

Initially, studies about DBE in childhood were limited to case reports, which were followed by center reports. To date, there have been seven studies about DBE procedures in childhood. In 2007, Leung[21] performed DBE in 15 pediatric patients; five of whom were < 10 years old. Liu et al[22] performed DBE with a diagnostic rate of 77.8% in 31 pediatric patients aged 3-14 years. In 2010, Lin et al[23] reported 13 successful DBE procedures in 11 pediatric patients ranging from 8 to 20 years. Thomson et al[24] and Nishimura et al[25] reported DBE in 14 and 48 pediatric patients, respectively. In 2012, Shen et al[26] reported 35 DBE procedures performed in 30 pediatric patients, whereas Uchida et al[27] performed 17 DBE procedures to 12 children. Evaluation of obscure gastrointestinal bleeding, surveillance and treatment of polyposis syndromes, investigation of abdominal pain, chronic diarrhea, and suspected mucosal inflammation comprised the indications in all the above-mentioned pediatric DBE patients. Reported complications encountered in these patients were post-polypectomy bleeding, sore throat, abdominal discomfort, and oral secretion aspiration. One intestinal perforation was reported after resection of a Peutz-Jeghers polyp in a 3-year-old boy during enteroscopy. Reviewing the studies and case reports, it seems that the younger children with lower weight have a higher possibility of complications such as perforation. In our study, perforation occurred in an adult patient with diffuse angiodysplasia after APC. Postprocedural sore throat and abdominal discomfort were noted in all our pediatric patients, whereas abdominal discomfort was the major complaint in adult patients.

As a result, many centers have begun to use DBE widely in adults and children. DBE is a safe method for small bowel lesions in children, as in adults. Interventional procedures are also as safe in pediatric as adult patients; however, larger trials are needed to reach a firm conclusion.

Small bowel diseases are encountered frequently in adults and children. For diagnosing small bowel disease, endoscopy, barium series, ultrasound, and computed tomography were used before advanced techniques such as capsule endoscopy and double balloon enteroscopy (DBE). Segments of the small intestine that cannot be reached are now viewed via DBE and progress has been made in diagnosis and treatment of lesions in this region.

Studies about DBE in childhood were limited to case reports, which were followed by center reports. To date, there have been seven studies about DBE procedures in childhood. This is believed to be the first comparison of DBE in pediatric and adult patients.

DBE is a reliable method in children as well as adults. Diagnostic and therapeutic use of DBE will gradually increase in the future.

The study is interesting in that it evaluated the use of DBE in children, which has not yet been universally adopted. It appears to be safe and clinically effective.