AIM: To evaluate the feasibility of a new computed virtual chromoendoscopy (CVC) device (M i-scan) in the diagnosis of gastric neoplasia.

METHODS: Patients with superficial lesions no larger than 1.0 cm found during high definition endoscopy were included. Those with advanced or obviously protruded or depressed lesions, lesions larger than 1.0 cm and/or lesions which were not amenable to observation by zoom function were excluded. The endoscopist was required to give the real-time descriptions of surface pit patterns of the lesions, based on surface pattern classification of enhanced magnification endoscopy. According to previous reports, types I-III represent non-neoplastic lesions, and types IV-V represent neoplastic lesions. Diagnosis with M i-scan and biopsy was performed before histopathological diagnosis. Magnified images of gastric lesions with and without enhancement were collected for further analysis. The diagnostic yield of real-time M i-scan and effects on magnification image quality by tone enhancement (TE), surface enhancement (SE) and color enhancement (CE) were calculated. The selected images were sent to another endoscopist. The endoscopist rated the image quality of each lesion at 3 levels. Ratings of image quality were based on visualization of pit pattern, vessel and demarcation line.

CONCLUSION: Although digital enhancement improves the image quality of magnification endoscopy, its value in improving the diagnostic yield seems to be limited.

From January 1st to March 31st 2012, consecutive patients who underwent high definition gastroscopy in Shandong University Qilu Hospital were recruited into this study. Patients aged 18-80 years, having superficial lesions with diameter less than 1 cm were included. Those with advanced or obviously protruded or depressed lesions, lesions larger than 1.0 cm and/or lesions which were not amenable to observation by zoom function (poor preparation, difficult positions, and non-cooperation of patients) were excluded. This study was approved by the local ethics committee (Ethics Committee of Shandong University Qilu Hospital) and adhered to the Declaration of Helsinki for Medical Research involving Human Subjects-Ethical Principles for Medical Research Involving Human Subjects. All the patients who participated in this study have provided their written informed consents.

The instruments applied in this study were an EG-2990Zi endoscope (Pentax, Tokyo, Japan) and an EPK-i endoscopic system (Pentax, Tokyo, Japan). This high definition endoscope incorporated surface enhancement (at +2, +4 and +6 levels), color enhancement (+4, +5 and +6 levels) and tone enhancement functions. It is also equipped with an adjustable image magnification in a continuous range up to 100-fold. The diameter and the length of the insertion tube of this instrument are the same as those of a standard upper endoscope. To achieve the maximum magnification, a transparent hood was attached to the distal tip of the endoscope to fix the distance between endoscope and gastric mucosa at 2 mm.

All the patients underwent routine preparation before the procedure. The detected lesions were observed with magnification endoscopy in white light (MWL) mode and in enhancement (M i-scan) mode consecutively. The endoscopic procedures were performed by an experienced endoscopist who was familiar with magnification endoscopy diagnosis of early gastric cancer. The endoscopist was required to give the real-time descriptions of surface pit patterns of the lesions, based on surface pattern classification of enhanced magnification endoscopy. The surface pattern classification includes 5 types: type I, small round pits of uniform size and shape; type II, slit-like pits; type III, gyrus and villous patterns; type IV, irregular arrangement and size; and type V, destructive pattern. According to previous reports, types I-III represent non-neoplastic lesions, and types IV-V represent neoplastic lesions[7]. Real-time diagnoses to determine neoplasia or non-neoplasia were not required from the endoscopist. Instead, the diagnoses were made by another investigator according to the diagnostic strategy and real-time description above. Images of MWL [without tone enhancement (TE), surface enhancement (SE) and color enhancement (CE)] and i-scan (with “g” TE, +2 SE or +4 CE) were collected and stored on USB devices during the procedures. Four best quality images per lesion were selected and sorted randomly by the investigator.

The selected images were sent to another endoscopist who did not participate in any of the endoscopic procedures. The endoscopist was kept blind to the clinical and endoscopic information of the patients. The endoscopist rated the image quality of each lesion at 3 levels. Ratings of image quality were based on visualization of pit pattern, vessel, and demarcation line[22], which are key parameters to detect and characterize the gastric neoplasia. Rating scales of image quality were: pit pattern, 0 for unassessable, 1 for fine, 2 for excellent; vessel, 0 for invisible, 1 for visible, 2 for clearly visible; demarcation line, 0 for unassessable, 1 for fine, 2 for clear. The endoscopist then recorded the descriptions of the still images according to the same standards as applied in the real time observation[7].

The lesions were routinely biopsied, and the specimens were placed in 10% formalin solution and processed in the routine manner. The slices were examined by an experienced pathologist who had specific training in gastrointestinal pathology. The pathologist was kept blind to the clinical and endoscopic information of the patients. The histology report was based on the WHO (World Health Organization) classification of gastrointestinal tumors. The study flow diagram is illustrated in Figure 1. 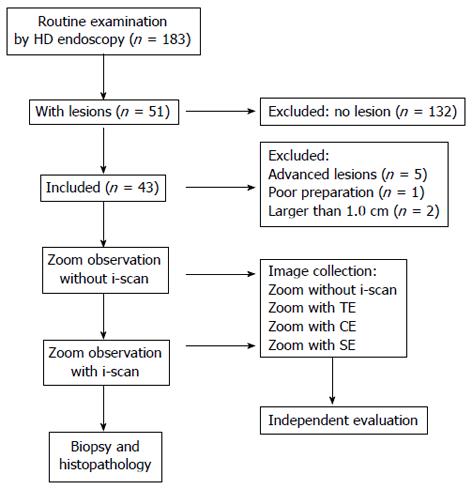 When the histopathology was re-classified into 2 categories (as non-cancerous lesions including inflammation, atrophy, metaplasia and LGD, or cancerous lesions including HGD and cancer) and the pit patterns re-classified into 2 categories as described above, sensitivity, specificity, PPV, NPV and likelihood ratio of M i-scan regarding gastric neoplasia were 100%, 77.1%, 50%, 100% and 4.37% respectively. Kappa value calculated from agreement between M i-scan and histopathology was 0.557 (moderate agreement). The diagnostic yield after re-classification is shown in Table 2.

Descriptions of the still images based on lesions demonstrated that diagnosis by MWL revealed a sensitivity, specificity, PPV, NPV and LR of 87.5%, 71.4%, 41.2%, 96.2% and 3.06%, respectively. Although M i-scan with TE and SE slightly increased the diagnostic yield, there was no significant difference (P > 0.1). M i-scan with CE did not change the diagnostic yield by MWL. M i-scan with SE perfectly matched the results of real-time descriptions. Representative images showing image quality differences among different modes are illustrated in Figure 3.

Detection and characterization of early gastric cancer by dyeless virtual chromoendoscopy, such as NBI and computed virtual chromoendoscopy (CVC), are preferable for the endoscopist, because of time, labor and potential risks reduction[31,32]. Virtual chromoendoscopy with magnification is thought to be the dream team, since the former provides the detection “red flag” followed by real-time characterization by the latter. It was reported that real-time characterization of Barrett’s esophagus[33,34], gastric cancer[35,36] and colorectal adenoma[37,38] can be improved by dyeless virtual chromoendoscopy, such as NBI or FICE[25-29,39]. In this pilot feasibility study, we aimed to evaluate application of M i-scan in the diagnosis of small superficial gastric lesions, both in real-time investigation and post-endoscopy still image analysis. The preliminary results showed that M i-scan is helpful for the in vivo prediction of small gastric superficial lesions with excellent sensitivity and NPV, acceptable specificity and LR, and poor PPV. The post-endoscopy still image analysis showed that M i-scan with TE and SE can slightly increase the image quality.

One feature of M i-scan is to mimic the surface enhancement of EME by acetic acid spraying. In this study, the still image analysis showed that SE significantly improves visualization of surface pit pattern and demarcation line compared to MWL. Although there were excellent sensitivity and NPV, and acceptable specificity results, the PPV was poor, just as the results of enhanced magnification endoscopy[7]. This is partly due to the low percentage of neoplastic lesions in the sample (18.6%, 8/43). On the other hand, erosion is sometimes difficult to be differentiated from neoplasia by surface pit pattern evaluation, as in both lesions surface pits could be lost. In these cases, evaluation of microvessel pattern in addition to surface pit pattern may be helpful. However, observation of microvessels is not satisfactory by M i-scan. Although still image analysis shows that TE significantly improves the visualization of microvessels, which only happens in cases with visible microvessels (visible to clearly visible), visualization of those cases with invisible microvessels (41.2%) remains unchanged.

This study has several limitations. Firstly, this is a feasibility study with small sample size and no sample size calculation. Secondly, the detection rate of small superficial gastric lesions was not evaluated. There has not been any report on the detection rate of small gastric lesions by CVC yet. In our own practice, CVC is not suitable for screen gastroscopy with insufficient luminous intensity. Thirdly, only one endoscopist performed the real-time and still image analysis, so there was no interobserver agreement analysis. However, the perfect match between surface classification of real-time and still image with SE suggests an excellent consistency, which should be validated in future studies. Fourthly, there was no comparison between M i-scan and magnification chromoendoscopy with indigo carmine or other contrast agents. And finally (the last may not be the least), gold standard histopathology was only performed by biopsy. Although we only included lesions smaller than 1.0 cm to minimize the heterogeneity, a discrepancy between biopsy and autopsy still remains.

In conclusion, real-time prediction of the histopathology of small superficial gastric lesions by M i-scan is feasible. Although digital enhancement increases image quality, its value in the diagnosis of gastric neoplasia seems to be limited.

Magnified chromoendoscopy is a promising tool in the surveillance and diagnosis of gastric neoplasia. Enhanced magnification endoscopy is superior to conventional endoscopy with detailed surface characterization.

Dyeless virtual chromoendoscopy with magnification might be preferable for reduction of labor and health risks. The endoscope used in this study is a magnification endoscope with both color and surface enhancement.

To date, this is the first endoscopic device with surface enhancement mimicking acetic acid spraying enhanced magnification endoscopy. With the surface enhancement, the gastric pit patterns can be classified into 5 categories according to the classification from enhanced magnification endoscopy, which enables the detailed characterization of the gastric mucosa. With classification of gastric pits, different common gastric pathologies such as atrophy, intestinal metaplasia and neoplasia can be identified in real-time procedures or by still image analysis. The margin of gastric lesions can be more easily identified although the differences were not significant.

Although digital enhancement improves the image quality of magnification endoscopy, its value in improving the diagnostic yield seems to be limited.

This is a quite interesting study on virtual chromoscopy on gastric neoplasia. However, data are limited.