Gastrointestinal arterio-venous malformations are a known cause of gastrointestinal bleeding. We present a rare case of persistent rectal bleeding due to a rectal arterio-portal venous fistula in the setting of portal hypertension secondary to portal vein thrombosis. The portal hypertension was initially surgically treated with splenectomy and a proximal splenorenal shunt. However, rectal bleeding persisted even after surgery, presenting us with a diagnostic dilemma. The patient was re-evaluated with a computed tomography mesenteric angiogram which revealed a rectal arterio-portal fistula. Arterio-portal fistulas are a known but rare cause of portal hypertension, and possibly the underlying cause of continued rectal bleeding in this case. This was successfully treated using angiographic localization and super-selective embolization of the rectal arterio-portal venous fistula via the right internal iliac artery.The patient subsequently went on to have a full term pregnancy. Through this case report, we hope to highlight awareness of this unusual condition, discuss the diagnostic workup and our management approach.

Core tip: We present a rare case of persistent rectal bleeding due to a rectal arterio-portal venous fistula, in the setting of portal hypertension. Through this case report, we hope to highlight awareness of this unusual condition, and discuss the diagnostic workup and our subsequent management. We believe that this is the first of such cases reported in the literature.

Arterio-venous malformations occurring in the gastrointestinal tract are a known cause of gastro-intestinal bleeding and can often be missed especially in the presence of other pathology. They can lead to persistent symptoms if left undiagnosed and untreated. We present a patient who had portal vein thrombosis, portal hypertension and continued to have rectal bleeding in spite of a patent spleno renal shunt to highlight awareness of this unusual condition.

A 33-year-old Chinese lady presented with multiple episodes of haematemesis when she was nine years old.She was seen in a secondary hospital and diagnosed to have portal hypertension secondary to portal vein thrombosis (PVT), a possible sequelae of a neonatal umbilical infection. The portal hypertension resulted in her having episodes of bleeding esophageal varices that were treated endoscopically during her childhood years. On clinical examination, she had splenomegaly but no stigmata of chronic liver disease. Investigations revealed that she did not have any liver cirrhosis or prothrombotic disorders. Liver function tests were normal. Radiological investigations confirmed the PVT and splenomegaly. More than twenty years after her initial diagnosis, she started to develop intermittent episodes of rectal bleeding which was attributed to rectal varices. She was anaemic (haemoglobin level 7.0 g/dL) and required intermittent blood transfusions for her symptoms. Her splenomegaly led to consumption thrombocytopenia (platelet levels ranged from 74-103 × 109 g/L) and she subsequently sought a second opinion at a tertiary centre, after much investigation including a contrast enhanced computed tomography scan, upper gastrointestinal endoscopy and a colonoscopy.

Pre-operative investigations were reviewed and showed PVT, splenomegaly and a dilated inferior mesenteric vein all the way down to the pelvis. Colonoscopy reported that there were large rectal varices. Based on these investigations, we presumed that the rectal varices were a result of left sided portal hypertension with the pressure transmitted down the inferior mesenteric vein, and thus performed a splenectomy and an end-to-side proximal splenorenal shunt for portal decompression.

After surgery, the patient continued to have rectal bleeding during her follow-up. A flexible sigmoidoscopy was performed and this revealed almost circumferentially dilated pulsatile submucosal vessels at the lower rectum. These were not reported in the colonoscopy that the patient underwent previously in the secondary hospital. A multiphasic computed tomography mesenteric angiogram confirmed a rectal arterio-venous fistula. On the arterial phase of the scan, there was evidence of arterio-venous shunting as evidenced by the dilated superior rectal vein draining into the superior mesenteric vein, with arterial feeders from the internal iliac arteries (Figure 1). A diagnostic catheter angiogram was performed to confirm the complexity of the feeder vessels and assess the potential collateral damage to rectal mucosa that could occur with angioembolisation. This revealed that there were two major arterial feeders arising from the anterior division of the internal iliac arteries on both sides which were supplying the arterio-portal fistula. There was a single tortuous drainage vein into the inferior mesenteric vein (Figure 2). 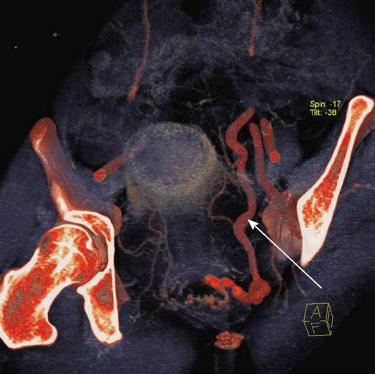 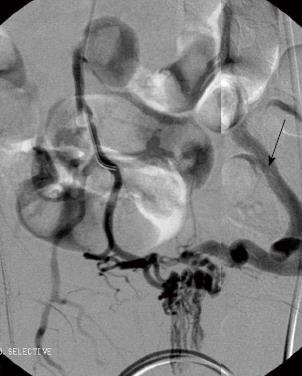 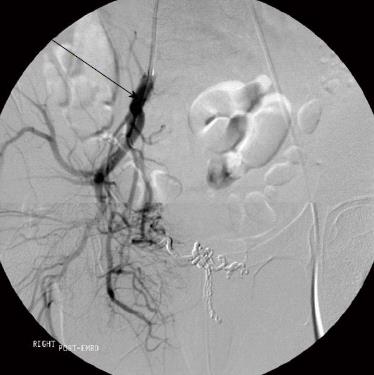 Arteriovenous malformations (AVMs) in the gastrointestinal tract are a known cause of gastrointestinal bleeding, and are usually difficult to diagnose. In the literature, it has been reported that the highest frequency of gastrointestinal AVMs occur in the right sided colon[1]. Arteriovenous malformations in the rectum are rare and it is often difficult to distinguish between bleeding from the AVM and bleeding from haemorrhoids, leading to diagnostic delays and even unnecessary procedures being performed for haemorroids[2].

Arterio-portal fistulas are a type of arteriovenous malformations defined as abnormal communications between the systemic arteries and the portal circulation[3]. They can be congenital or acquired. Congenital causes include arteriovenous malformations, ruptured aneurysms and hereditary telangiectatic diseases where there might be multiple arterio-portal fistulas present[4-7]. The majority of them are a result of penetrating or blunt trauma to the vessels which can be iatrogenic[8]. Most commonly, arterio-portal fistulas originate from the celiac or splanchnic circulation in particular the hepatic artery or splenic artery due to their close proximity to the portal and splenic veins. Rarely, they can be found to arise from the superior mesenteric or inferior mesenteric arteries[3].In our patient, the arterio-portal fistula arose from the internal iliac arteries and this is believed to be the first such case reported in the literature.

Portal vein thrombosis is a known cause of extra-hepatic presinusoidal portal hypertension. In neonates, this can be caused by umbilical infection, often as a result of umbilical vein catheterisation. The infection spreads along the left portal vein to the main portal vein causing thrombosis[8]. Due to the increase in portal resistance, collaterals arise from the high pressure veins in the portal system to the low pressure veins in the systemic circulation. The reversal of blood flow towards the systemic venous circulation leads to formation of varices at the oesophago-gastric region, along the falciform ligament at the umbilicus, in the retroperitoneum via the veins of Retzius and at the anorectal region where the superior haemorrhoidal veins decompress into the middle and inferior haemorroidal veins of the systemic circulation. Our patient presented with bleeding esophageal varices at an early age and this lead to her diagnosis of PVT. The leading cause of mortality in portal hypertension is bleeding esophageal varices[9]. Anorectal varices rarely bleed, likely due to the rich plexus of veins around the rectum which shunts away most of the blood.

In our patient, we offer two possibilities to account for her condition. The first is that she has a congenital pre-existing arterio-portal fistula between the rectal artery and the haemorrhoidal veins. However, when the patient first presented with rectal bleeding in the setting of portal hypertension, the most likely diagnosis of bleeding ano-rectal varices was made and she was treated with the aim of reducing her portal pressures, which was the presumed cause of the ano-rectal varices. In retrospect, this was a wrong postulation. The rectal bleeding did not resolve despite the splenorenal shunt and only on further investigations did we discover the arterio-portal fistula which had initially masqueraded as bleeding ano-rectal varices. Awareness of this entity as a possible differential diagnosis for bleeding ano-rectal varices is important. Initial investigation with a dynamic computed tomography scan with arterial and portal venous phase would have brought the diagnosis to light.

The second possibility is that the arterio-portal fistula was formed due to unintended or unnoticed trauma to the rectal wall. The left sided portal hypertension led to the formation of dilated portal vasculature in the rectum.These rectal varices are in close proximity to the branches of the arteries supplying the rectum, like the middle rectal artery in this case. An episode of unsuspecting trauma to the rectal wall possibly during defecation, led to the formation of the abnormal vascular communication between the middle rectal artery and the rectal varices, propagating the formation of an arterio-portal fistula

Multiphasic contrast enhanced computed tomography scan of the abdomen and pelvis helped to clinch the diagnosis of the arterio-portal fistula in this case, as contrast was seen on the draining dilated superior rectal vein in the arterial phase of the scan. This distinguishes it from a simple rectal bleeding secondary to rectal varices.In the setting of portal hypertension, awareness of the possible diagnoses is critical.

In the era prior to interventional radiology, arterio-portal fistulas were usually treated by open surgical excision. With the advent of super-selective angiographic catheterisation, embolisation is now the definitive treatment of choice for patients if the expertise is available[3].Inadequate imaging especially in the setting of presumed portal hypertension has led to the delayed diagnosis of this arterio-portal fistula and local transanal treatment could have been catastrophic. Endoscopic ablation of the nidus of dilated collaterals in the rectum using sclerosant or banding could have led to massive haemorrhage from high pressure arterial bleeding if it was simply treated as for rectal varices following portal decompression.