METHODS: Randomized controlled trials published from 1990 to 2012 comparing EPBD with EST for CBD stone removal were evaluated. This meta-analysis was performed to estimate short-term and long-term complications of these two treatments. The fixed random effect model or random effect model was established to analysis the data. Results were obtained by analyzing the relative risk, odds ratio, and 95%CI for a given comparison using RevMan 5.1. Statistical significance was defined as P < 0.05. Risk of bias was evaluated using a funnel plot.

CONCLUSION: Although the incidence of pancreatitis was higher, the overall stone clearance rate and risk of bleeding was lower with EPBD compared to EST.

Core tip: A meta-analysis was performed to evaluate the outcomes of endoscopic sphincteropapillotomy (EST) and endoscopic papillary balloon dilatation (EPBD) from previously published reports. Fourteen randomized trials involving 1975 patients were analyzed. Of those, 980 were treated with EPBD and 995 were treated with EST. Differences were observed between the treatments in total stone clearance, short-term complications, and long-term complications. Compared to EST, the overall stone clearance rate was lower, and the incidence of pancreatitis was higher with EPBD. Thus, EPBD may decrease the incidence of long-term complications and be more suitable for patients who have a high risk of bleeding.

Along with the advance of endoscope technology and related instruments, endoscopic sphincteropapillotomy (EST) had become the first choice for common duct stones. But it was associated with some short-term and long-term complications such as pancreatitis, bleeding, cholangitis, perforation of the bile duct, narrow nipple, and sphincter loss of function. Endoscopic papillary balloon dilatation (EPBD), as a replacement for EST, was first reported by Staritz et al[1]. Compared with EST, EPBD is a less complicated procedure, and the incidence of short-term complications, such as bleeding and perforation, are decreased, while the function of the Oddi sphincter (OS) is protected. In a multicenter random control study, 117 patients who were definitively diagnosed with bile duct stones were treated by EPBD; after treatment, the incidence of pancreatitis among those patients reached 15.4% and two patients died from post-treatment complications[2]. Thus, a heated dispute still remains in the medical community as to the safety and application of EPBD. In the present study, a meta-analysis was performed to evaluate the curative effect and safety of EPBD relative to EST by systematically reviewing published randomized trials.

Articles were retrieved when they met the inclusion criteria. Two reviewers (He L and Zhou DC) applied the inclusion criteria independently to the retrieved articles as defined in the protocol. Any differences were resolved by discussion. Each included study was critically evaluated for its study quality, based on the criteria used by the Cochrane Collaboration, and level of evidence according to the standards of the Hierarchy of Evidence. One reviewer (He L) extracted information on data extraction sheets and a second reviewer (Zhou DC) checked them.

All data were calculated using RevMan5.1. Relative risks (for dichotomous outcome measures), odds ratio (OR) and weighted mean differences (for continuous outcome measures) with 95%CI were calculated. Statistical significance was defined as P < 0.05. If the outcome could not be calculated or the incidence was too small, a qualitative evaluation was given by a detailed explanation. A heterogeneity test was conducted according to the value of I2, χ2 and P. If heterogeneity was positive, then a sensitivity analysis was carried out. Any article that showed positive heterogeneity was excluded. Risk of bias was evaluated using a funnel plot.

After the initial screening, 178 relevant articles were considered for review. Of these, 163 articles were not in accordance with the defined inclusion criteria. Among the remaining 15 articles, one was excluded based on positive heterogeneity[3]. A total of 14 articles were included in this meta-analysis with available data from 1975 patients summarized in Table 1[4-16]. 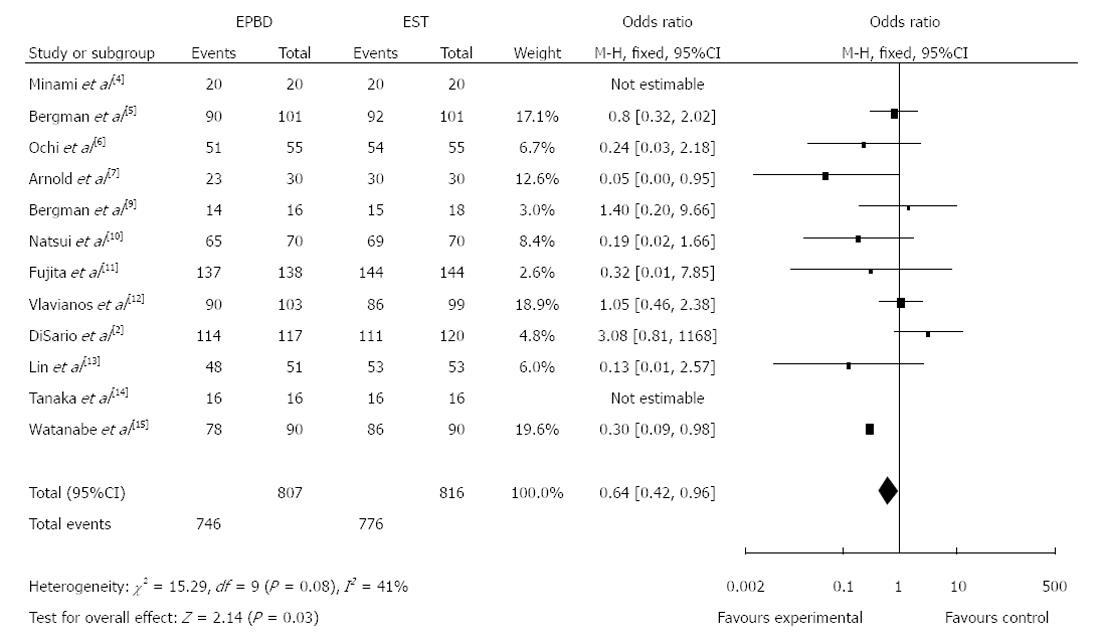 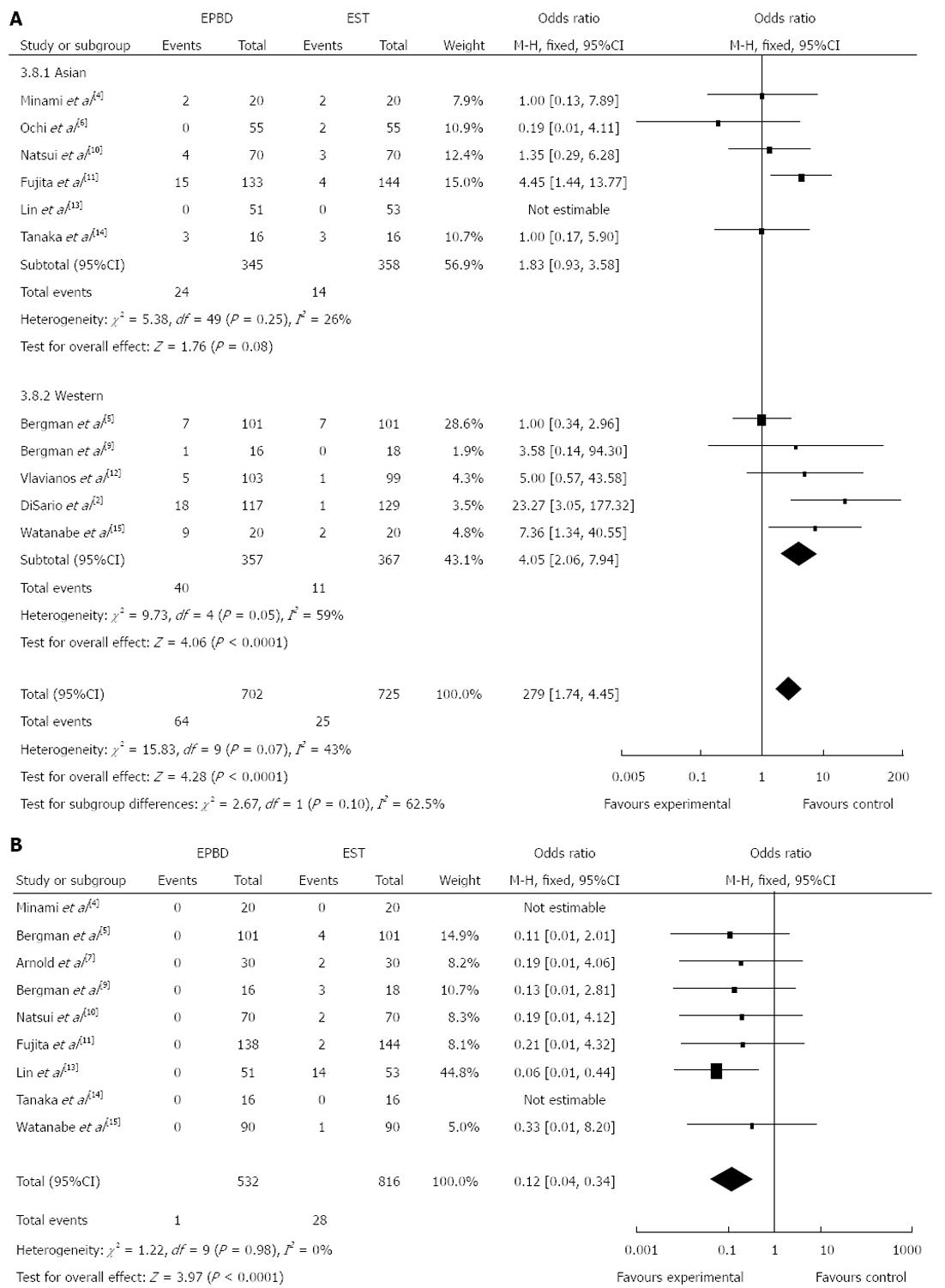 A funnel plot analysis (Figure 5) was symmetrical on the whole, demonstrating that there was no significant publication bias. In addition, the included studies were of high quality and generally had a low risk of bias for selection, performance, attrition, and reporting as seen in Figure 6. 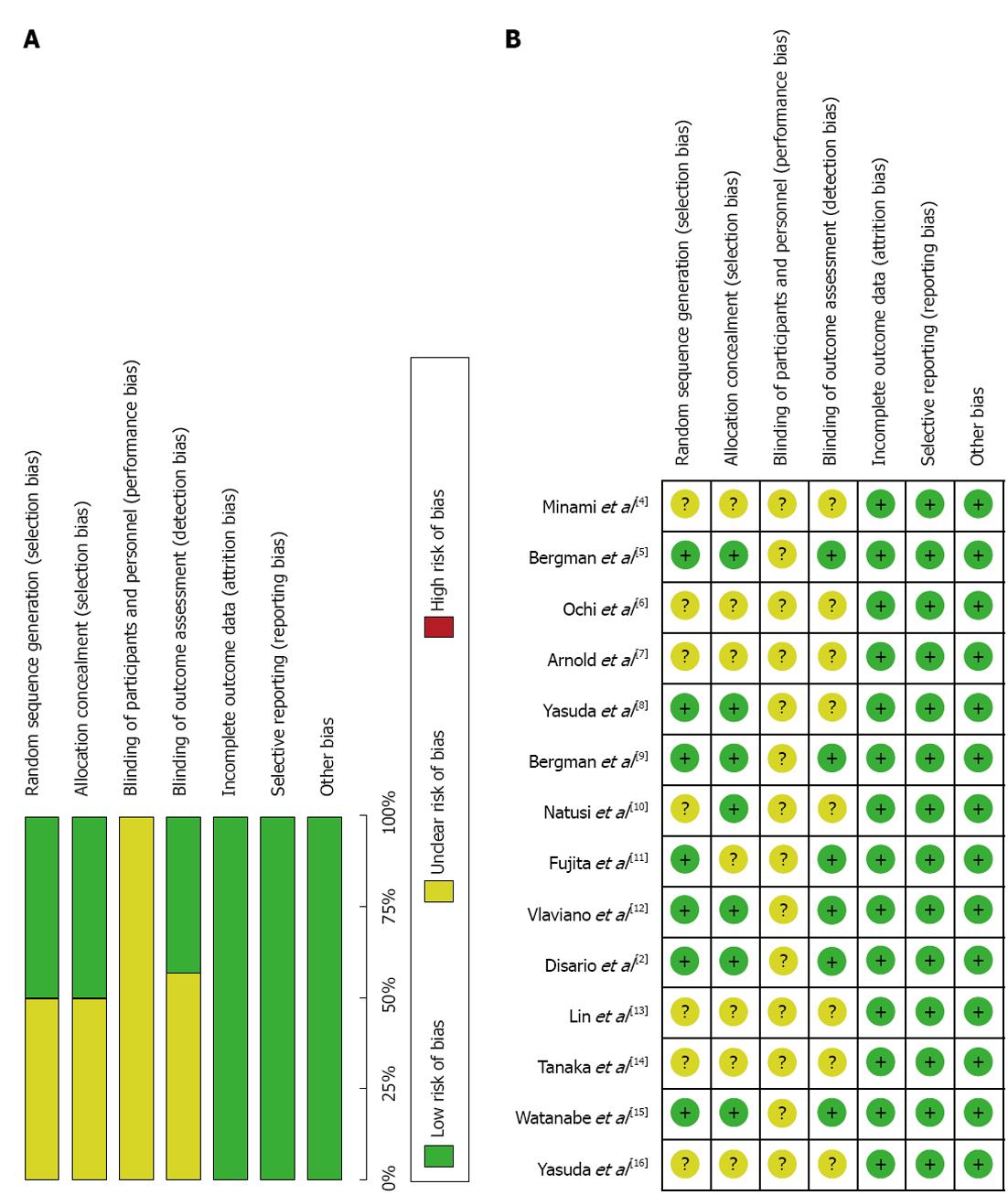 Figure 6 Risk of bias summary (A) and bias assessment for each individual study (B).

However, allocation concealment was only performed in the 5 studies[5,9,12,15,16]. Some outcomes were reported based on the intention to treat using assigned randomization at the beginning of the study[5,9,11,12,15]. In other studies, there was no detail given about randomization. A double-blinding method was not applied in any of the included studies. The main observational outcomes reported were the overall clearance of stones and stone clearance at the first attempt, both of which were reported by all studies. Completed data for the other outcomes was not available.

Meta-analysis is an accepted method that can evaluate controversial issues met in clinical practice, by analyzing high quality randomized controlled trials in quantification. Studies from many different countries were included in this analysis, and the differences between EPBD and EST were evaluated systematically to produce meaningful results.

The results indicated that EST increased the overall clearance of stones compared to EPBD, but that the stone clearance at first attempt was similar. It is generally acknowledged that EPBD is less likely to clear big stones than EST because its inflation into the papilla is smaller. In our analysis, however, we have defined the stone diameter as part of the exclusion criteria. Some studies were excluded if the smallest stone was larger than 12 mm[4], 15 mm[6], 20 mm[7], or 14 mm[11]. Two studies were excluded because the total number of stones was more than 10[6] or 5[7]. Stone extraction basket usage was more frequent when patients were treated with EPBD than EST, especially when the diameter of stones was larger than 8 mm[4], 10 mm[5,6], or 12 mm[10].

In the matter of safety, our results suggest that there was no significant difference in short-term complications between EPBD and EST. However, the incidence of long-term pancreatitis was higher after EPBD. This phenomenon may be due to the poor outflow of pancreatic juice caused by hydrops or spasm of the OS after EPBD. The risk of pancreatitis after EPBD is also a highly disputed issue, especially in America. EPBD has been abandoned by many endoscope doctors because they believe that this technology increases risk of long-term pancreatitis[17]. Conversely, most researchers in Asia and Europe maintain that there is no direct consequence between pancreatitis risk and EPBD and report that pancreatitis usually occurs in the light or medium stage[5,6,10,13,14]. A retrospective study by Tsujino et al[18] showed that among 1000 patients treated by EPBD, only 48 of them (4.8%) experienced light to moderate pancreatitis and only one patient (0.1%) experienced serious pancreatitis, but was fully recovered 8 mo after treatment.

Compared to EST, the incidence of bleeding during operation was significantly lower in EPBD, possibly due to the protection of the sphincter of Oddi during EPBD that is not incised directly as in EST. This advantage promotes the application of EPBD for patients with poor blood clotting abilities. A previous study of 98 patients who were diagnosed with CBD stones experiencing liver cirrhosis was carried out by Tsujino et al[18]. In that report, bleeding only occurred in one patient after the EPBD procedure, even though 31 of these patients were in C-stage of Child-Pugh. Moreover, when faced with atypical anatomy, such as duodenal diverticulum or Billroth-II gastrectomy history, EPBD is more suitable than EST because EPBD can expand the OS more easily. In addition, Bergman et al[9] has reported that for patients with Billroth-II gastrectomy history, the amount of bleeding was significantly decreased after EPBD (EPBD vs EST: 2% vs 17%, P = 0.03).

Based on the results of this analysis, compared to EST, EPBD decreased the incidence of long-term cholecystitis and the recurrence of stones in CBD, but there were no significant differences in the duration of long-term cholangitis or recurrence of stones. Some research has suggested that EST could lead to some serious side effects, such as exhaustive, non-reversible loss of function of the OS, although pneumobilia and bile regurgitation exists in nearly 50% of patients and biliary bacterial disease exists in nearly all patients[19]. Some complications may be continuously affected by these conditions, such as with acute cholecystitis and cholangitis. Our analysis showed discordant results with long-term cholangitis, but this may be due to the limited sample size and short follow-up.

A study by Natsui et al[20] determined that EST was correlated with bacterial colonization in bile duct, which could lead to chronic inflammation and fibrosis of the bile duct system. Research by Kurumado et al[21] suggested that destruction of the sphincter of Oddi could even increase the risk of bile duct cancer. A retrospective study by Kojima et al[22] found that recurrence of CBD stones was higher after EST than EPBD (17.0% vs 6.8%, P < 0.05), and the sphincter of Oddi function was protected in 70% patients after EPBD, decreasing the recurrence of stones. Another study reported an 8.8% recurrence rate of stones in 837 patients after 4.4 years of follow-up where mechanical lithotripsy usage and subsequent cholecystolithiasis were considered risk factors for recurrence[18].

In summary, in a comparison of the two treatments, EPBD and EST, the overall stone clearance rate of EPBD was lower and the incidence of pancreatitis with EPBD was higher. EPBD has the advantage of decreasing the incidence of long-term complications, and for patients who have a high risk of bleeding, EPBD may be more suitable.

To date, endoscopic sphincteropapillotomy (EST) and endoscopic papillary balloon dilatation (EPBD) are the primary choices for the removal of common duct stones. As a replacement for EST, EPBD is a less complicated procedure, has fewer short-term complications, such as bleeding and perforation, and protects the function of the Oddi sphincter. However, a heated debate still remains as to which is the better procedure.

In this report, a meta-analysis was performed to evaluate the curative effects and safety of EST and EPBD by systematically reviewing newly published randomized trials.

A greater understanding of the advantages and disadvantages of EST and EPBD treatments for the removal of common biliary duct stones allows clinicians to make appropriate treatment decisions for patients.

The authors performed a systematic meta-analysis to investigate the curative effect and safety between EST and EPBD. Compared with EST, in spite of the overall stone clearance rate of EPBD is lower, and the incidence of pancreatitis in the EPBD is higher. EPBD has the advantages to decrease the incidence of long-term complications. For patients experiencing a greater risk of bleeding, EPBD may be more suitable.