Core tip: This report presents a patient with metastatic hepatocellular carcinoma localized to his mediastinum. The metastatic tumor grew rapidly, with α-fetoprotein (AFP) elevation rates correlating with the size of the tumor and tumor growth. We used several sessions of transarterial embolization to control this metastatic tumor. After every successful intervention, the tumor had been stabilized and AFP levels were decreased significantly, resulting in a survival time of the patient that is much longer when compared to the mean survival times of others with similar diagnoses. Transarterial embolization could be an alternative treatment choice for patients with mediastinal metastasis of hepatocellular carcinoma.

Liver cancer in men is the fifth most frequently diagnosed cancer and the second most frequent cause of cancer death worldwide. In women, it is the seventh most commonly diagnosed cancer and the sixth leading cause of cancer death[1]. Although advances in treatment of hepatocellular carcinoma (HCC) have resulted in prolonged survival of HCC patients, the incidence of extrahepatic metastasis associated with HCC has also risen[2]. Patients with extrahepatic spread have a poor prognosis[3]. Current managements for these patients are oral sorafenib and possibly transarterial chemoembolization (TACE) for the hepatic tumors if the patient has enough remaining liver function[4]. There are few studies examining the efficacy of locoregional management for extrahepatic metastasis. Furthermore, there are even less reports of lymph node-directed therapy in distant lymph node metastasis[5]. In this report, a 71-year-old patient with symptomatic isolated progression of mediastinal lymphadenopathy of HCC was treated with transarterial embolization (TAE). The symptoms were controlled and survival time was longer than expected.

A 71-year-old man visited the Taichung Veterans General Hospital for the management of his HCC. His HCC tumor was 3 cm, localized to the right lobe, and diagnosed by elevated α-fetoprotein (AFP) levels and hypervascular appearance on abdominal computer tomography (CT). The patient was a hepatitis B carrier with a class A Child-Pugh score and had early stage HCC as assessed by the Barcelona Clinic Liver Cancer staging classification (stage A). However, this patient did not want to receive curative surgery due to old age and personal preference.

He received TACE treatment twice during the first year following his HCC diagnosis. His serum AFP level decreased from 1171 to 14.92 ng/mL following this TACE therapy. One year later, his serum AFP level increased again, but an abdominal CT scan and angiography of the liver did not reveal definite hepatic hypervascular tumors. Two years after the diagnosis of HCC, he started to experience hoarseness due to left vocal cord paralysis. A chest CT scan revealed a 5 cm tumor over the aortopulmonary window of the mediastinum (Figure 1). Metastatic HCC was identified pathologically with endosonography-guided fine needle aspiration. After discussions with the surgeon, radiation oncologist and interventional radiologist, he refused surgery and radiation.

Figure 1 A chest computer tomography scan of the aortopulmonary window of the mediastinum revealed a 5 cm metastatic lymphadenopathy (m). A: Transverse view; B: Sagittal view.

Transarterial embolization of mediastinal tumor was adopted as the treatment modality. Although available now, molecular targeting agents for HCC were not yet a standard care option for patients at that time. The TAE procedure was performed as follows: the first branch of the right superior bronchial artery was identified as the main artery supplying the left hilar metastatic lesion during angiography. Lipiodol was administrated via this artery as the embolizer, and a chest CT scan verified the metastatic lymph nodes were mostly occupied by lipiodol (Figure 2). His AFP level decreased from 17089 to 1061 ng/mL and this TAE session was considered successful. There were no adverse effects like cough, chest pain, fever or dyspnea. Thereafter, he received another four sessions of TAE via several supplying arteries for viable or recurrent components. AFP levels decreased following each successful TAE, but these levels would rebound quickly due to recurrence of the tumor. During the 16-mo follow-up period, his AFP level was approximately 1000-4000 ng/mL. In addition, he began to have night coughs. On the sixth session of TAE, embolization was performed via a small branch of the left branch of internal mammary artery identified by high-resolution chest CT (Figure 3). AFP levels decreased significantly to 16.64 ng/mL and this session was considered successful and the patient remained in stable condition for seven months with no TAE-related complications. However, several months later, the patient began to experience progressive night cough and elevation of AFP levels. A chest CT scan showed progression of mediastinal tumors (Figure 4). A seventh TAE for recurrent mediastinal lymphadenopathy was performed for controlling of tumor. However, his lung condition deteriorated progressively eventually causing him to expire due to pneumonia-related respiratory failure. The patient’s survival time since the initial diagnosis of mediastinal metastasis was 32 mo. During the follow up period, his hepatic tumor remained well embolized and his liver function remained stable without evidence of decompensation.

Figure 2 First session of transarterial embolization for mediastinal tumor. A: An angiogram of the right superior bronchial arterial branch showed a metastatic hepatocellular carcinoma (M) in the left hilum supplying by the first branch of right superior bronchial artery. Embolization was performed by lipiodol only; B: Chest computer tomography (CT) scan: Lipiodol retention in posterior portion of the mass (T) over aortopulmonary window region and decreased in size, but the anterior portion of the mass (M) over aortopulmonary window region increased in size as compared with previous CT. 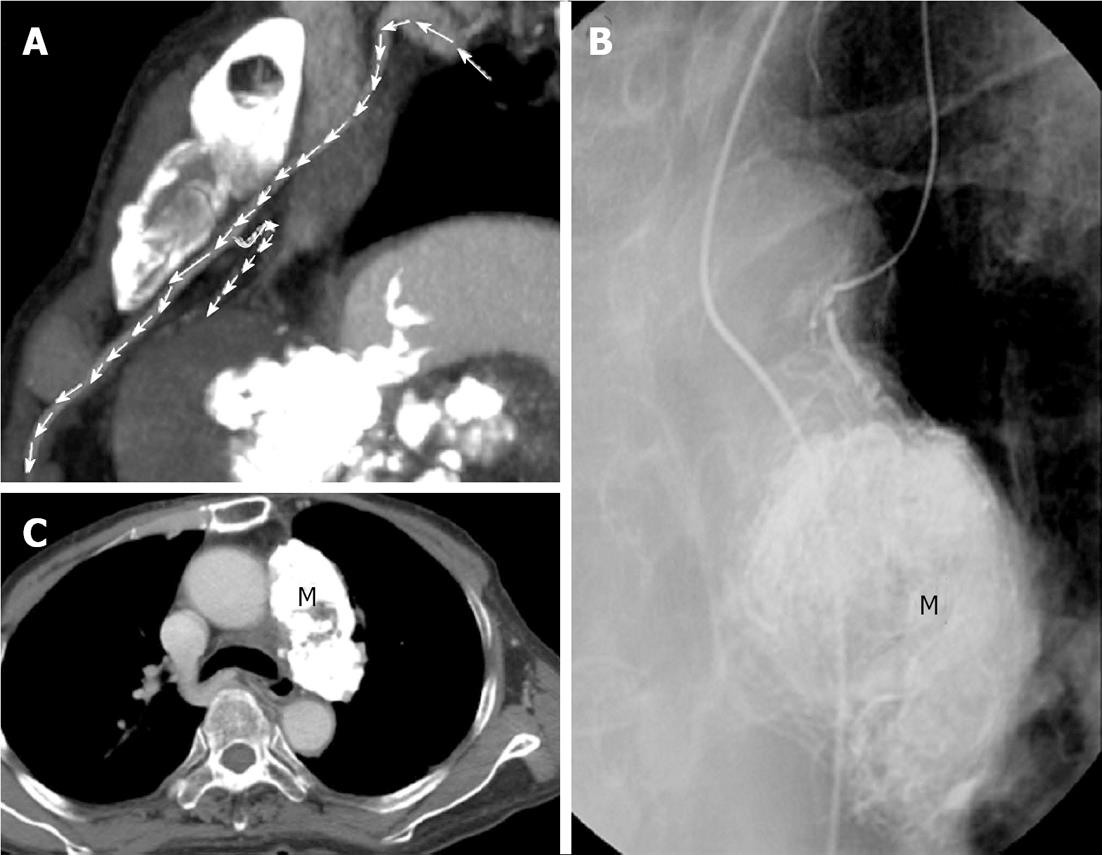 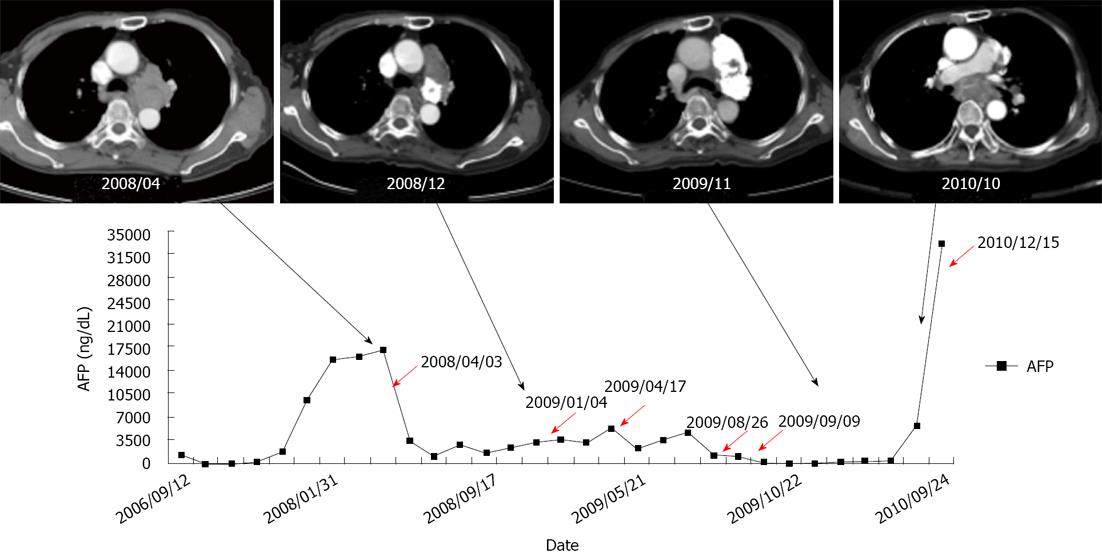 Figure 4 Alpha-fetoprotein levels in time course of treatment. Every session of transarterial embolization is shown with a red arrow. The computed tomography (CT) images represented the progression of mediastinal tumor and treatment response of transarterial embolization. The CT image on the far right was taken about three months before death of the patient. The tumor compressed the left bronchus, which may explain the cause of the patient’s pneumonia.
DISCUSSION

The natural course of HCC is unique. Unlike cancers of the colon, breast, lung, and others, whose causes of death are typically due to systemic processes with development of disseminated diseases, HCCs usually present as local lesions and subsequent development of systemic diseases are relatively uncommon[6]. The causes of death from HCC may not only be due to progressive cancer, but may also be due to liver failure.

Current management of metastatic HCC is TACE for primary tumor control and possible chemotherapy, radiation or molecular targeting with sorafenib for extra-hepatic lesions[4]. Some evidence suggests that treatment of extra-hepatic metastasis of HCC can significantly improve the prognosis of patients whose hepatic lesions are under control[7,8].

Previous studies indicate that surgery for HCC-associated pulmonary[9], adrenal[10] and local lymph node metastasis[11] may be beneficial when added to these traditional treatments. Many effective locoregional therapies for extrahepatic metastasis have also been reported, including irradiation for bone[12], lymph node[13], brain[14], and adrenal[15] metastases, and percutaneous ablation for adrenal[16] and bone metastases[17]. Further, TAE has been used as a therapy for adrenal metastasis[18] while this is the first report of TAE for mediastinal metastasis.

The most common sites of lymph node metastasis of HCC are locoregional lymph nodes including paraaortic, portohepatic, periceliac and peripancreatic nodes. The most common site of HCC-associated distant metastatic lymphadenopathy is the mediastinal lymph nodes[19]. Because lymph node metastasis or dissemination itself is not the usual cause of death[5], there are relatively few studies examining the management of metastatic lymph nodes. Lymph node metastases that cause agonizing pain, or rarely life-threatening conditions like pericardial or esophageal invasion[20], may be indications for locoregional treatment such as radiotherapy or surgical resection.

Excellent radiotherapy responsiveness was reported in patients whose intrahepatic HCC was concurrently under control[13]. However, radiation at the mediastinum is associated with cardiovascular toxicity, which may present with acute pericarditis, restrict cardiomyopathy, ischemic heart disease, congestive heart failure and valvular heart disease[21]. Moreover, radiation therapy at the mediastinum is also associated with a 5%-10% risk of symptomatic radiation pneumonitis[22]. Subtle lung function impairment induced by radiation injury may further reduce the capacity of a patient to deal with future cardiopulmonary stress. Surgical resection may be an option if the patient has good liver function and isolated lymph node metastasis[23]. However, the existence of possible occult metastasis and the variable degree of hepatic decompensation in HCC patients greatly reduce the benefits of surgery.

Currently, the mainstay treatment for metastatic HCC is sorafenib[4], while options including heavy ion or proton radiotherapy also remain. TAE for mediastinal metastatic HCC may be an alternative option for certain patients with localized metastatic lymph nodes. Furthermore, TAE does not cost more than the other treatment modalities. In this report, the patient did not present significant side effects during several sessions of TAE and had satisfactory control of his tumor. However, several challenges associated with performing TAE in the mediastinum remain including: the considerable challenge of locating the supplying vessels, the close proximity to many critical arteries in this part of the body such as the spinal cord artery, and the risk of reflux of embolizer to other vital areas. Above all, the key challenge to providing a safe and successful TAE is selection of the supplying artery. Thus, it remains unclear whether this technique can be widely used.

In conclusion, this report showed that the use of TAE for treatment of a metastatic mediastinal HCC provided temporal tumor control and increased survival time. In the right environment, TAE should be an alternative option for well-selected patients with mediastinal metastasis of HCC.