The differential diagnosis of acute abdomen is typically extremely broad in range, with vasculitis posing a rare but potentially life-threatening cause of acute abdomen. Here, we report a case of acute abdomen with bowel wall thickening limited to jejunum, accompanied by unexplained renal dysfunction. Later, the patient was diagnosed as having polyarteritis nodosa based on surgically resected jejunal necrosis. Despite aggressive treatment, including the use of steroid pulse therapy and continuous hemodiafiltration, the patient died. Although polyarteritis nodosa is extremely rare in patients with acute abdomen, acute abdomen is relatively common manifestation of that. And it is reported that involvement of small intestine suggests poorer prognosis. Our case highlights the importance of vasculitis as a differential diagnosis of patients with atypical acute abdomen. In this report, we not only review possible clues that might have led to an earlier diagnosis in this case, but also attempt to draw some lessons for treating similar cases in the future.

Core tip: Our case shows the importance of vasculitis, including polyarteritis nodosa, as a differential diagnosis in case of acute abdomen. Here we provide comprehensive review of gastrointestinal organ involvement in Polyarteritis nodosa, and concluded that gastrointestinal lesions, especially small intestinal lesion, is relatively common manifestation and that suggests high mortality. Then we draw two findings, bowel wall thickening limited to jejunum and unexplained renal dysfunction, as possible clues that might led us to earlier diagnosis in this case. Additionally, we discuss possible relationship between pathophysiology of intestinal ischemia and radiological findings.

Polyarteritis nodosa is a systemic vasculitis affecting medium- and small-sized arteries[1,2]. The affected sites can include the kidneys, gastrointestinal tract, heart, peripheral and central nervous system, and skin. Accurately diagnosing the disease is difficult because there are no known markers, making biopsy a mandatory procedure. Here we report the case of a patient with acute abdomen diagnosed as polyarteritis nodosa based on surgically resected jejunal necrosis.

A 70-year-old female with a history of diabetes mellitus, hypertension, and gallbladder stone visited the emergency department at our institution complaining of severe abdominal pain. Upon examination, she appeared slightly distressed; her temperature was 36.6  °C, blood pressure 153/101 mmHg, pulse 100 beats/min, and oxygen saturation 98% on room air. Epigastric tenderness without rebound or guarding tenderness, and pitting edema of all extremities were noted. The laboratory findings were remarkable for elevated white blood cell count (20650/μL), C-reactive protein (8.62 mg/dL), and impaired renal function (BUN 70.2 mg/dL, creatinine 2.63 mg/dL). Urinalysis showed 1+ protein and 2+ occult blood. Although her platelet count had fallen to 8.6 × 104/μL, coagulation tests were normal. Serologies for hepatitis B virus, hepatitis C virus, anti-nuclear antibodies, cytoplasmic-Anti-Neutrophil Cytoplasmic Antibodies (ANCA), and perinuclear-ANCA were also negative. Abdominal computed tomography (CT) without contrast showed bowel wall thickening almost limited to jejunum, a stone at the neck of gallbladder, and a moderate amount of ascites surrounding the liver and the Douglas’s pouch (Figure 1). Based on these findings, the patient was admitted to our institution with a diagnosis of acute abdomen, and intravenous sulbactam/cefoperazone was started. 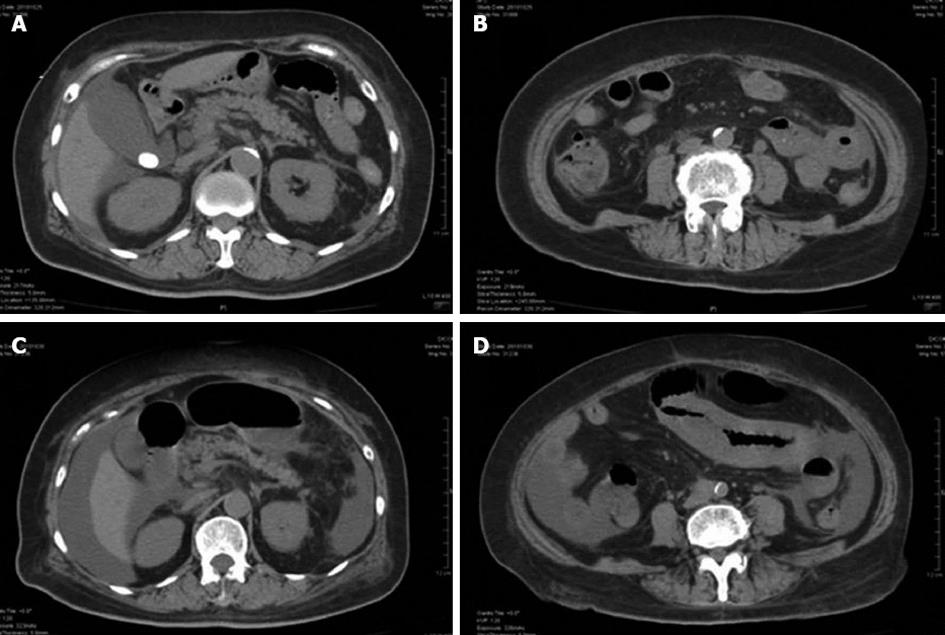 Although her abdominal pain improved spontaneously after admission, her response to the antibiotic was minimal and her inflammatory reaction remained high. On day 6 following admission, the patient complained of severe abdominal pain. An emergent CT showed deterioration of the edema in the jejunum and the ascites (Figure 1). Although her antibiotic regimen was switched to imipenem/cilastatin, no improvement was observed. In light of these findings, an emergent laparotomy was carried out with tentative diagnoses including a serious intestinal infection refractory to antibiotics, a thrombosis or occlusion of the mesenteric vasculatures, and an intestinal lymphoma. Laparotomy findings included hemorrhagic ascites measuring more than 2000 mL, and a swollen, dark red jejunum. Twenty centimeters of the jejunum was resected, and an end-to-end anastomosis was conducted. The pathology was consistent with a diagnosis of polyarteritis nodosa (Figure 2). The pathological finding of a post-surgical skin lesion on her forearm was also consistent with the diagnosis.

Figure 2 Pathological specimen from the resected jejunum showing fibrinoid necrosis of the arterial wall and infiltration of inflammatory cells around the arteries. A: Hematoxylin and eosin staining. B: Elastica van Gieson staining. Original magnification ×100.

On day 17 following admission, steroid pulse therapy (methylprednisolone 1000 mg/d for 3 d) was prescribed, followed by a maintenance dose of steroids (60 mg/d for 8 d). Although her inflammatory reaction and renal function initially improved, the patient suffered a relapse of disease activity and her general status deteriorated despite continuous hemodiafiltration and extensive use of antibiotics including ceftriaxone and ceftazidime. On day 32 following admission, an acute onset of left hemiparesis was observed, with normal head CT findings (Figure 3). At midnight of the same day, sudden respiratory arrest occurred. Although cardiopulmonary resuscitation was performed immediately after arrest, the patient died. An autopsy was not performed. The clinical course is summarized in Figure 4. 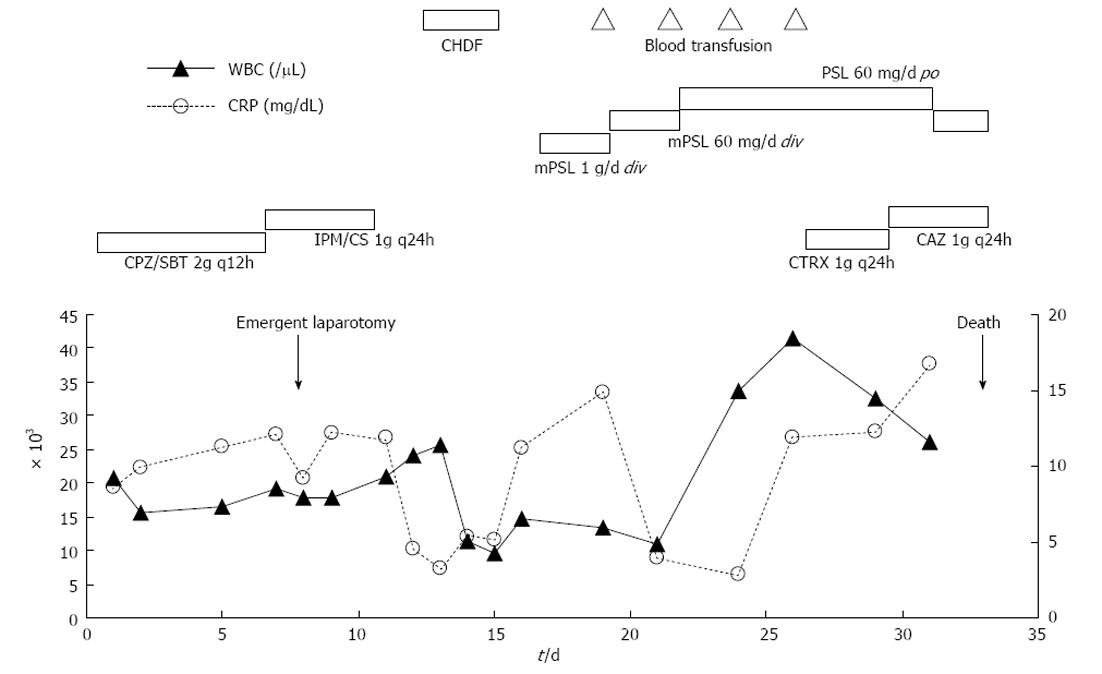 Figure 4 Clinical course of the patient. Cefoperazone/sulbactam (CPZ/SBT) was started at day 1 and switched to imipenem/cilastatin (IPM/CS) at day 7. Ceftriaxone (CTRX) was started at day 26 and switched to ceftazidime (CAZ) at day 29. Steroid pulse therapy [methylprednisolone (mPSL) 1 g/d for 3 d] was started at day 16, and changed to maintenance dose of mPSL (60 mg/d) at day 19, then that was switched to oral steroid (PSL 60 mg/d) at day 22. According to deterioration of general status, steroid was again administered intravenously since day 31. Continuous hemodiafiltration (CHDF) was performed from day 13 to day 15, and intermittent blood transfusion was done at day 19, 21, 23 and 26. WBC: White blood cell; CRP: C-reactive protein.
DISCUSSION

Polyarteritis nodosa is a type of vasculitis affecting medium- and small-sized arteries. Epidemiologic studies of polyarteritis nodosa have generally been difficult to interpret because they have typically included patients with microscopic polyarteritis and other possible diseases as well. Recent studies, however, have estimated the prevalence per one million adults to be approximately 30 in France and Sweden[3,4]. Possible symptoms of polyarteritis nodosa include weight loss, livedo reticularis, testicular pain, myalgias or muscle weakness, mono- or polyneuropathy, hypertension, and renal dysfunction[1]. Unfortunately, no definitive diagnostic marker has ever been identified, and diagnosis is most often confirmed by biopsy. The prognosis of polyarteritis nodosa depends on the existence of serious organ involvement; in this regard, Guillevin et al[5] have established 5 risk factors leading to higher rates of mortality. These include proteinuria > 1 g/d [relative risk (RR) for death was 3.6], renal insufficiency with serum creatinine > 1.58 mg/dL (RR = 1.86), gastrointestinal tract surgery (RR = 2.83), cardiomyopathy (RR = 2.18), and central nervous system involvement (RR = 1.76). When none of the 5 prognostic factors is present, the mortality rate at 5 years is 11.9%. However, when more than 3 factors are present, the mortality rate is as high as 45.95%.

In the case of the 70-year-old female patient described here, we needed 6 d before a laparotomy was carried out and 16 d before a definitive diagnosis of polyarteritis nodosa could be made. Reviewing our case retrospectively, there were some findings inconsistent with a typical intestinal infection. First, the findings were remarkable for the presence of renal dysfunction with proteinuria and microscopic hematuria. Second, her abdominal pain and intestinal edema were so severe and resistant to antibiotics. Additionally, in our case, bowel wall thickening was limited to jejunum. We believe that such situation is very unlikely and there is no typical etiology that could explain the symptoms and findings. If we had considered these findings more carefully, we might have suspected vasculitis, or other connective tissue diseases as a differential diagnosis. Nevertheless, since a biopsy remains indispensable for the diagnosis of polyarteritis nodosa and the patient’s possible biopsy site was limited to the intestine at that time, we believe that a correct diagnosis was extremely difficult to ascertain in her situation.

Following diagnosis, we performed steroid pulse therapy (methylprednisolone 1000 mg/d for 3 d), followed by a maintenance dose of steroids (60 mg/d for 8 d). Although her inflammatory reaction and renal function initially improved after beginning pulse therapy, the patient subsequently worsened. Although repetitive steroid pulse therapy or another type of immunosuppressive therapy might have been effective in this case, as has been described in the literature[9], we unfortunately did not have sufficient time to start such a treatment before the patient died.

Intestinal ischemia has generally been diagnosed by CT, and bowel wall thickening is one of the most reported findings in that situation[10]. Recently, magnetic resonance imaging (MRI) has begun to be regarded as an alternative modality to detect intestinal ischemia. In vivo study with animal model showed that bowel wall thickening was absent from arterial mesenteric ischemia, and bowel wall with reduced thickness resembling sheets of paper is rather observed 2-4 h after the onset, when evaluated by MRI[11]. CT findings in our case are possibly late findings after arterial occlusion, findings caused by reperfusion, or that suggestive of venous infarction. Advances in imaging modality would further clarify the relationship between pathophysiology of intestinal ischemia and radiological findings.

At approximately 12 h before death, a left hemiparesis was observed in our patient, although a head CT revealed no obvious findings. It is difficult to state the cause of the patient’s left hemiparesis since she died before a more thorough investigation could be conducted, but it is possible that it stemmed from complications of polyarteritis nodosa, including brain infarction and polyneuropathy[12-14].

In conclusion, we have reported here a case of acute abdomen diagnosed as polyarteritis nodosa based on surgically resected jejunal necrosis. Vasculitis cannot be ruled out as a differential diagnosis in cases of acute abdomen, especially if the patient exhibits atypical findings, such as unexplained renal dysfunction or severe bowel wall thickening limited to small intestine. Additionally, it is worth noting that vasculitis cannot be ruled out even though serum markers, including ANCA, are negative, since there are no definitive diagnostic markers for polyarteritis nodosa.