Angioleiomyoma represents a benign stromal tumor, which usually occurs in the subcutaneous tissue of the extremities, although its occurrence in the gastrointestinal tract is very rare. A case of rectal angioleiomyoma in a 40 year-old female patient is described here. Six months earlier, the patient suffered from periodical prolapse of an oval tumor from the anus, along with difficulties in bowel movement. A transanal extirpation of the tumor was performed. This is the first reported case in the English literature of a patient presenting with prolapsed angioleiomyoma of the rectum. During the immediate postoperative period, as well as 6 mo later, the patient had an unremarkable postoperative recovery.

Angioleiomyomata are a vascular variant of leiomyomata, which are benign tumors of smooth muscle. Angioleiomyoma of the large bowel is an extremely rare benign tumor. This is the first reported case in the English literature where a patient presenting with perineal discomfort/tenesmus and symptoms with a rectal mass passed via the anus had underlying angioleiomyoma.

A 40 year-old woman presented to an examination complaining of pain-related difficulties, feelings of pressure, and a prolapsing rectal tumor during defecation. The patient’s difficulties began three years earlier, in the form of a sporadic feeling of discomfort in the anus and an occasional tumor prolapse 3 cm × 2 cm in size, which was spontaneously moving back inside. During the last six months, the tumor has grown up to 7 cm × 5 cm × 6 cm, and had been permanently falling out and hardly withdrawing. Due to bowel movement and personal hygiene problems, the patient came to the proctology unit.

On admission, the woman was hemodynamically stable and the laboratory analyses were within the normal limits, except for a slightly lower level of calcium ions (2.17 mmol/L) and slightly increased chloride (106 mmol/L). She was examined at the Proctology Section of the General Surgery Clinic. The tumor was 7 cm × 5 cm × 6 cm in size, “stuck out” from the anus, had an intact smooth surface, and was painless on palpation, on a 3 cm wide pedicle, and reducible (Figure 1). 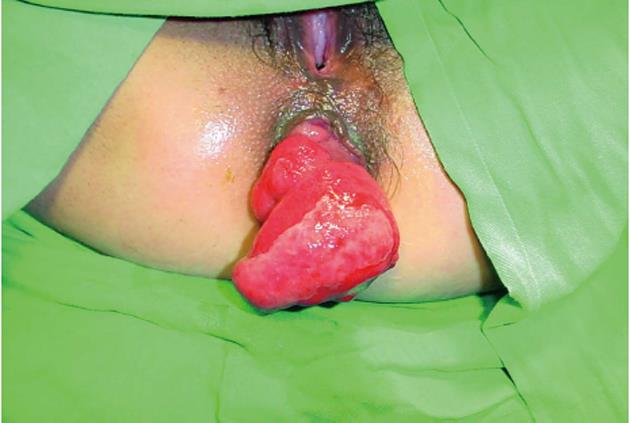 Figure 1 In situ prolapsed angioleiomyoma of the rectum. 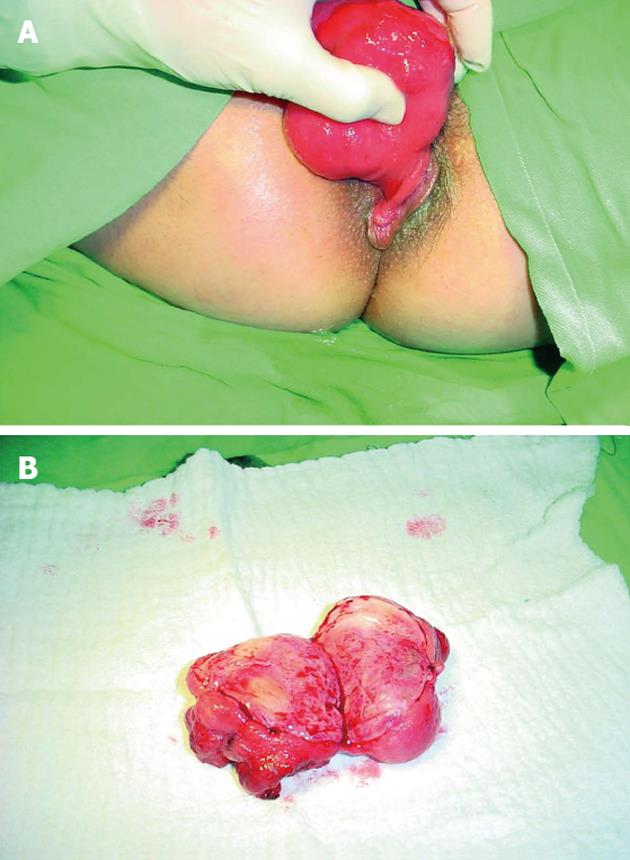 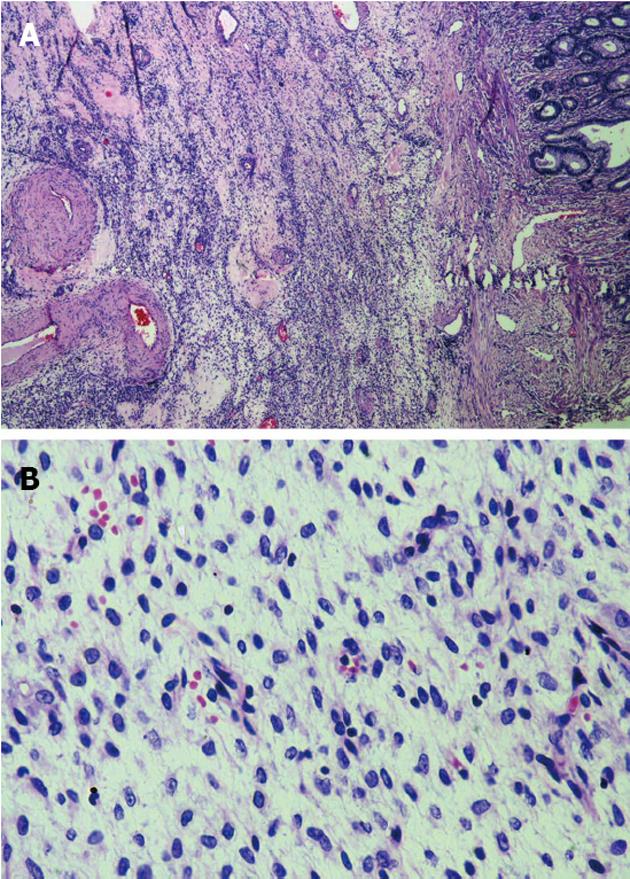 Results of immunohistochemical analyses revealed that the angioleiomyoma was negative for C-kit and CD34, and positive for smooth muscle actin and desmin (Figure 4).

Primary leiomyomata are very rare in the gastrointestinal tract; mostly appearing in the stomach and small intestine. They are much less frequent in the esophagus and colon. Leiomyomata in the anorectal region make up 3% of all gastrointestinal benign tumors of smooth muscles (i.e., they appear in 1 out of every 2000-3000 rectal neoplasms)[1,2]. The first rectum leiomyoma was described by Vander Espt in 1881[3]. With regard to macroscopic appearance, colon leiomyomata can be sessile (i.e., peduncular, intraluminal, intramural and extraluminal). The clinical picture goes mainly without symptoms, except in the case of large tumors, which present occasional bleeding, a palpable and often prolapsing mass, and occasional pain in the last part of the colon[1,4].

In 1995, Ezinger divided all leiomyomata into three groups: superficial, vascular (i.e., angioleiomyomata) and deep leiomyomata[5]. Angioleiomyomata are benign tumors of smooth muscle with expressed abnormal small blood vessels with thickened walls. They usually occur on the skin or in the subcutaneous tissue of the lower extremities, representing one out of five characteristic painful skin lesions, together with angiolipoma, glomus tumors, spiradenoma, and neurinoma[6]. Cases of localization have also been described, including the mouth cavity, female reproductive organs, scrotum, and kidneys[7-11]. They originate from the muscularis mucosa or muscularis propria of the rectum wall. Pathophysiological division includes 4 types of angioleiomyomata: (1) capillary/solid, which are characterized by the existence of stratified smooth muscle fibers that surround a few thin vascular small channels; (2) venous, with numerous vascular small channels with thickened walls; (3) cavernous, with wide vascular small channels, surrounded by a thin layer of smooth muscle cells; and (4) combined capillary and venous angioleiomyomata[5,12].

The presence of angioleiomyomata in the gastrointestinal tract is exceptionally rare, although in the literature there are several publications which describe cases with complications, such as bleedings, volvulus, peritonitis, and perforation[13-16]. In the English literature, there are no data about the existence of rectum angioleiomyomata, making this the first described case.

Considering the nature of the tumor, the treatment implies that its transanal extirpation was a minimally invasive procedure.

Prolapsed peduncular intraluminal rectal angioleiomyoma represents an exceptionally rare type of tumor, which has now been described in literature for the first time. Its treatment implies transanal extirpation with further patient follow-up.

We would like to express our gratitude to Mrs. Gorjana Djordjevic for her meticulous proofreading and assistance with the English text.