AIM: To investigate the effect of surgery and chemotherapy for gastric cancer with multiple synchronous liver metastases (GCLM).

RESULTS: Twenty patients underwent gastrectomy and hepatectomy and completed their perioperative chemotherapy and hepatic arterial infusion before and after surgery. Ninety-four patients had no aggressive treatment of liver metastases because of technical difficulties with resection and severe cardiopulmonary dysfunction. In the surgery group, there was no toxicity greater than grade 3 during the course of chemotherapy. The response rate was 100% according to the response evaluation criteria in solid tumors criteria. For all 114 patients, the overall survival rate was 8.0%, 4.0%, 4.0% and 4.0% at 1, 2, 3 and 4 years, respectively, with a median survival time (MST) of 8.5 mo (range: 0.5-48 mo). For the 20 patients in the surgery group, MST was 22.3 mo (range: 4-48 mo). In the 94 patients without aggressive treatment, MST was 5.5 mo (range: 0.5-21 mo). There was a significant difference between the surgery and unresectable patients (P = 0.000). Three patients in surgery group were still alive at the end of the cut-off date.

CONCLUSION: Perioperative weekly DCF and SP achieved a good response, and combined with surgery, they could improve prognosis of GCLM.

Core tip: We investigated the effect of surgery and chemotherapy for gastric cancer with multiple synchronous liver metastases (GCLM). Perioperative weekly docetaxel, cisplatin and 5-fluorouracil and S-1 and cisplatin achieved a good response, and combined with surgery, they could improve prognosis of GCLM.

Surgery for gastric cancer with multiple synchronous liver metastases (GCLM) is a major challenge to every surgeon; not only because of coexisting factors, but each GCLM patient has his/her own clinicopathological features. It is difficult to determine the suitable candidates for treatment. At present, the justification for surgical resection is still controversial[1], and the prognosis is dismal. In contrast, for patients with colorectal carcinoma with liver metastases, a second liver resection is safe and feasible. Hepatic resection has been widely accepted as a potentially curative approach in patients with liver metastases of colorectal carcinoma[2].

One study demonstrated that patients with GCLM limited to one lobe, who underwent radical gastrectomy with D2 lymphadenectomy, had the most favorable outcomes following hepatic surgical treatment[3]. A further study found that the number of metastases was no longer considered to be an important predictor of long-term survival[4]. Some positive effect of liver resection in these patients seemed to imply that hepatic surgical treatment should be recommended for appropriate GCLM candidates[5-7]. The United Kingdom myoblast autologous grafting in ischemic cardiomyopathy (MAGIC) trial of perioperative chemotherapy in gastric cancer found that perioperative systemic chemotherapy improved 5-year survival from 23% to 36%[8], compared with surgery alone. What is the optimal dosing appropriate for Chinese patients, and how do we schedule perioperative chemotherapy that could improve tolerability while maintaining efficacy? In our previous pilot study, we found that liver resection combined with a weekly docetaxel-based regimen (docetaxel, cisplatin and 5-fluorouracil, DCF) were well tolerated, with a good response. In the present study, we assessed more GCLM patients who underwent aggressive treatment, in comparison with non-surgical treatment.

From July 2007 to October 2012, 1821 patients with gastric cancer were treated in Beijing Cancer Hospital of Beijing University and Qingdao Municipal Hospital. Only patients with adenocarcinoma were enrolled in this study. Among these patients, 114 developed multiple liver metastases. The inclusion and exclusion criteria are described in our previous study[9]. Patients had adequate physical condition and received two course of preoperative chemotherapy. After effective screening with preoperative chemotherapy, 20 patients underwent curative gastrectomy and hepatectomy for GCLM. Two regimens of perioperative chemotherapy were used. Twelve patients received the S-1 and cisplatin (SP) regimen: 40 mg S-1 orally, twice daily for 3 consecutive weeks, and 60 mg/m2 cisplatin intravenously on day 8, followed by a 2-wk rest period, within a 5-wk cycle[10]. Eight patients received the DCF regimen: 20 mg/m2 cisplatin over 1 h; 20 mg/m2 docetaxel, over 30 min; and 350 mg/m2 5-fluorouracil over 15 min on day 1. This was administered weekly for 6 wk, followed by a 2-wk break[9].

According to the Japanese Research Society for Gastric Cancer guidelines, our surgical procedure was total or subtotal gastrectomy, at a minimum of 5 cm clearance. Hepatic resection with D2 lymphadenectomy was performed[11].

After surgery, two courses of chemotherapy (SP or DCF regimen) were administered. After completion of chemotherapy, patients without other distant disease, except for hepatic metastasis, underwent hepatic arterial infusion (HAI). If liver lesions progressed in the course of postoperative chemotherapy, HAI was commenced immediately. Safety evaluation was standardized by the National Cancer Institute Common Terminology Criteria for Adverse Events version 4.0 (May 28, 2009). Evaluations were classified by the Response Evaluation Criteria in Solid Tumors (RECIST) guidelines[12]. The study was approved by the medical ethics committees of Qingdao Municipal Hospital and Beijing Cancer Hospital. Written informed consent was obtained according to the principles of the institution.

Evaluation of patient survival was by follow-up contact using telephone and outpatient records. All patients were assessed every 3 mo during the first year and every 6 mo thereafter. Patient follow-up lasted until death or the cut-off date of October 1, 2012. Three patients (2.6%) were lost to follow-up, and survival information was censored at their last visit. Four (3.5%) patients were still alive and were censored at the cut-off date. The median follow-up period for the 114 patients was 10 mo (range: 2-53 mo).

Statistical analysis was performed with SPSS version 13.0 (SPSS, Chicago, Illinois, United States). For univariate analysis, binomial and categorical data were evaluated by cross-linked tables and the Fisher’s exact test. Results were regarded as being statistically significant when P < 0.05. For survival analysis, the Kaplan-Meier method was used.

The mean age of the 114 patients was 56.7 years (range: 33-75 years), and the male to female ratio was 3.1:1. Twenty patients underwent gastrectomy and hepatectomy. These 20 patients completed their perioperative chemotherapy and HAI before and after surgery. The other 94 patients were not considered for aggressive treatment of liver metastases. In most cases (n = 91), the reason for deciding against aggressive treatment was patient refusal; the remaining three were not eligible for surgery due to severe cardiopulmonary dysfunction. There was no perioperative mortality. There were no obviously different clinicopathological characteristics between patients with and without hepatectomy.

There were 12 male and eight female patients in the surgery group. The median age of this group was 54 years (range: 31-74 years). Seventeen patients had a lymph-node-positive stage of the primary tumor, and only three had no lymph node involvement. There were 13 patients with distal gastric cancer, seven had proximal gastric cancer, and nine had bilobar metastases. The clinicopathological characteristics of the patients who underwent hepatectomy are listed in Table 1.

The patients in the surgery group finished two courses of SP or DCF chemotherapy before the operation. In the two courses of chemotherapy with different regimens, no patients had toxicity greater than grade 3. The most common adverse effects in the two regimens were diarrhea, nausea, leukopenia, neutropenia and thrombocytopenia, at grade 1 or 2 intensity. Most adverse effects could be modified by premedication, such as dexamethasone and antiemetics. Granulocyte colony-stimulating factor support was given to 12 patients. Response to treatment was assessed by monthly magnetic resonance imaging or computed tomography. All patients achieved a partial response according to the RECIST[12] criteria (Table 2). The response rate was 100% according to the RECIST (Figures 1 and 2). There was no treatment-related mortality. 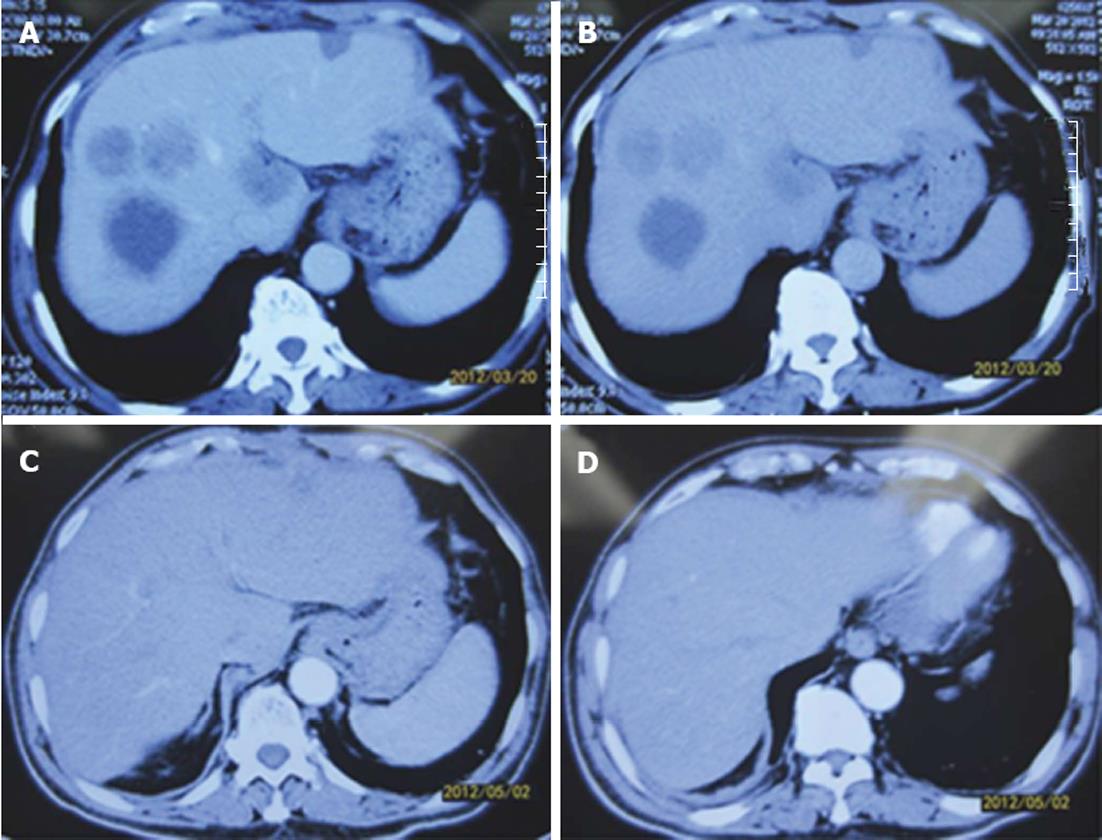 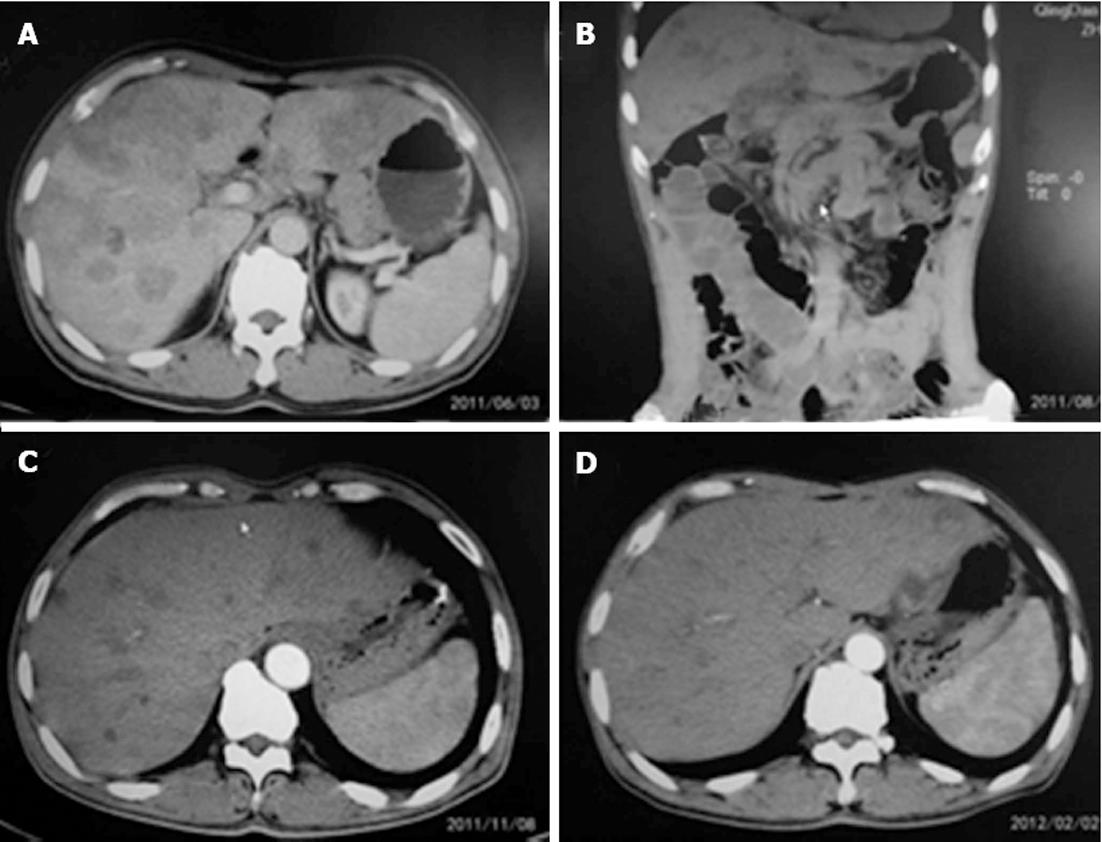 We performed gastric and liver resection only in cases that were potentially curative. The common complications in the perioperative course were impaired wound healing (surgical therapy in two patients), and pleural effusion in four. Fourteen patients underwent major hepatectomy (hepatic resection of more than three segments: hemihepatectomy in 12 and trisectionectomy in 2); and the remaining six patients underwent minor hepatectomy (sectionectomy in 2 and limited resection in 4). The types of hepatectomy were classified according to the Brisbane 2000 terminology[13]. 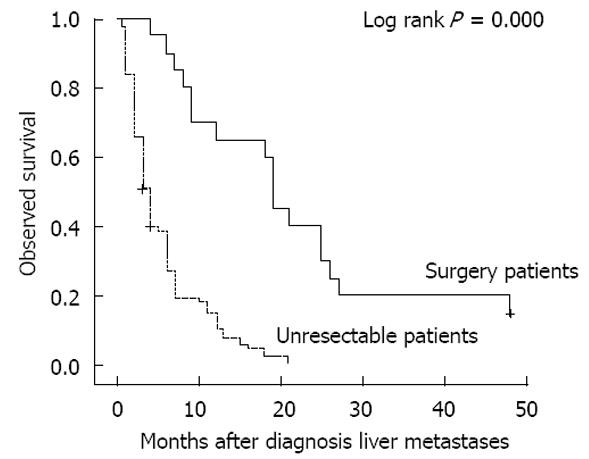 Liver metastases is reported to develop in 5%-9% of patients with gastric cancer[15]. One study has shown that only a limited number of GCLM patients are eligible for surgical treatment[4]. After the promising results of the MAGIC trial, in Europe, current practice for treatment of GCLM patients has become surgery with perioperative chemotherapy[10,16]. However, the optimal surgical strategy for GCLM remains a matter of debate. Only some patients with GCLM are ideal candidates for hepatectomy, therefore, many patients are unsuitable for surgical resection, either due to other distant metastases, extensive lymph node metastases, multiple bilateral metastases, or comorbidity.

Some researchers have reported that even a generous surgical margin may not be essential for curative hepatic resection of liver metastases, because recurrence is strongly associated with systemic spread rather than local invasion[6]. This conclusion highlights the essentiality of perioperative chemotherapy. GCLM recurrence after surgery is most likely due to occult metastatic disease in the tumor bed and at distant sites, so locoregional resection alone is not a complete 100% successful procedure. Therefore, multimodality approaches using systemic chemotherapy or radiation, or a combination of both have been used in an attempt to improve outcomes following surgery, especially in patients with multiple metastases.

However, adequate chemotherapy can lead to intolerability and morbidity and mortality. In the present study, we wanted to explore some safe and effective regimens available to Chinese patients with GCLM. We investigated the safety and efficacy of liver resection combined with perioperative S1 regimen in patients with GCLM. We performed a retrospective analysis based on recent prospectively collected data. S-1 is an orally active combination of tegafur (5-fluorouracil prodrug), gimeracil (an inhibitor of dihydropyrimidine dehydrogenase, which degrades fluorouracil), and oteracil (which inhibits phosphorylation of 5-fluorouracil in the gastrointestinal tract) in a molar ratio of 1:0.4:1. S-1 has been the standard regimen for adjuvant chemotherapy for advanced primary gastric cancer[18], and its mild side effect profile and ease of administration make it a preferred choice. The DCF regimen has major myelotoxicity[19-25]. However, weekly DCF in our study was well tolerated, and both the regimens were well tolerated and achieved a good response. All GCLM patients with adequate physical condition obtained a benefit from preoperative chemotherapy, which assisted with their subsequent surgical procedure. Appropriately modified chemotherapy is necessary for the improvement of the GCLM resection rate and complete elimination of micrometastases[26-31]. In our initial results, weekly DCF yielded an unexpected high response as preoperative chemotherapy for GCLM[9]. We found that S-1 combined with cisplatin also yielded a high response and had better applicability. These modifications of altering the dose and frequency of the cytotoxic agents are an individualized approach for treatment of GCLM. Our aim is to improve the generally poor prognosis of this aggressive disease and further phase II and III trials are warranted to confirm the feasibility and efficacy of preoperative chemotherapy for GCLM.

Liver metastasis is a fatal event in gastric cancer patients, and remains a major cause of cancer-related death. Surgery for multiple liver metastases from gastric cancer (GCLM) has favorable outcomes. However, the efficacy and safety of perioperative chemotherapy is still a matter of debate.

The glycosylated and myristoylated smaller surface antigen trial was conducted to compare gastrectomy with metastasectomy plus systemic therapy versus systemic therapy alone. The results of this trial showed that aggressive surgical resection in combination with systemic chemotherapy may improve the outcomes of the patients with metastatic gastric cancer.

In a previous pilot study, the authors found that liver resection combined with weekly docetaxel-based chemotherapy were well tolerated and had a good response. In the present study, the authors found that perioperative weekly docetaxel, cisplatin and 5-fluorouracil (DCF), and S-1 and cisplatin (SP) in patients with GCLM who underwent aggressive surgical treatment could improve prognosis and overall survival.

The study results suggest that perioperative weekly DCF and SP could be used to treat GCLM patients who underwent aggressive surgical treatment.