Colonic metastasis from other organs is very rare. Here we report the case of a 62-year-old man with a history of pancreatoduodenectomy for stage IIB pancreatic head cancer performed seven years back. He presented with abdominal distension and pain. Under the preoperative diagnosis of bowel obstruction, surgical treatment was performed, and a circumferential lesion causing bowel obstruction of the ascending colon was detected. A right hemicolectomy with lymph node dissection was performed. The specimen showed a 5-cm wall thickening with a cobble-stone like appearance of the ascending colon, which morphologically appeared scirrhous. Histological examination revealed cancer nests invading from the subserosa to the muscular and submucosal layers of the colon. Immunohistochemical analysis of the tumor cells demonstrated positive staining for cytokeratin 7, but negative for cytokeratin 20, which was the same as the previous pancreatic cancer specimen. These pathological and immunohistochemical features strongly supported the diagnosis of colonic metastasis from the pancreas. Thereafter, the patient received systemic chemotherapy, but unfortunately, he died 14 mo after the surgery.

A 62-year-old man underwent a pancreatoduodenectomy in May 2001 for pancreatic head cancer. The pathological diagnosis was a well-differentiated adenocarcinoma with strong fibrosis, which was defined as a scirrhous type. There was invasion into the pancreatic duct and lymph node metastases. The stage of pancreatic cancer was T2N1M0 stage IIB, as per the American Joint Committee on Cancer staging system 7th edition[4]. Follow-up regimen of pancreatic cancer was examinations of computed tomography (CT), ultrasonography and the biological marker every 6 mo. During the seven years of follow-up, he showed no signs of recurrence. In July 2008, he began complaining of abdominal distension and pain. A CT of his abdomen revealed ascending colon wall thickening with luminal narrowing (Figure 1A). There were no other obvious signs of recurrence of pancreatic cancer or ascites. Both chest CT and abdominal ultrasonography also revealed no obvious sign of recurrence. In addition, a contrast examination of the patient’s alimentary tract revealed stricture of the ascending colon (Figure 1B). The levels of the biological marker carbohydrate antigen 19-9 (CA19-9) were within the normal range for seven years post-pancreatoduodenectomy; this time, the levels were elevated to 1886.6 U/mL. The carcinoembryonic antigen levels were normal. At this time, a colonoscopy was not performed because of fear of precipitating an overt obstruction. Conservative therapy did not improve the bowel obstruction, thus surgical treatment was performed in August 2008, under the presumptive diagnosis of either an adhesive intestinal obstruction or colon cancer. Intraoperative findings revealed a 5-cm mass in his ascending colon, which was causing the bowel obstruction. Neither peritoneal dissemination nor any other lesions could be observed in the abdomen, including the residual pancreas or liver. With an intraoperative diagnosis of a tumor in the ascending colon, a right hemicolectomy with adjacent lymphadenectomy was performed. The specimen revealed a 5-cm wall thickening with a cobblestone-like appearance of the ascending colon (Figure 2). The tumor was morphologically scirrhous and infiltrated the colon wall, as seen in gastric linitis plastica. Histological examination revealed cancer nests with glandular structures from the subserosa invading into the muscular and submucosal layers of the colon (Figure 3).

Figure 2 A pathological specimen showing a 5-cm wall thickening and a cobblestone-like appearance of the ascending colon.

Figure 3 Histological findings revealed the cancer nests invading from the subserosa to the muscular and submucosal layers of the colon. A: × 4; B: × 10.

Immunohistochemical staining of the colon tumor as well as the previously resected pancreatic tumor was positive for cytokeratin 7 and negative for cytokeratin 20 (Figure 4). These pathological and immunohistochemical features strongly supported the diagnosis of a tumor in the ascending colon originating from the pancreas and was not a primary adenocarcinoma of the colon. In addition, infiltration of the lymphatic vessels and metastases were observed in two of the 28 dissected lymph nodes. However, the patient had an uneventful postoperative course and was discharged on the 12th post-surgical day. The CA19-9 levels decreased to 840 U/mL after surgery; however, the levels elevated to 8200 U/mL two months later. He was treated with seven cycles of gemcitabine (1000 mg/m2) after pancreatoduodenectomy; nevertheless, his condition deteriorated and he died 14 mo after surgery. 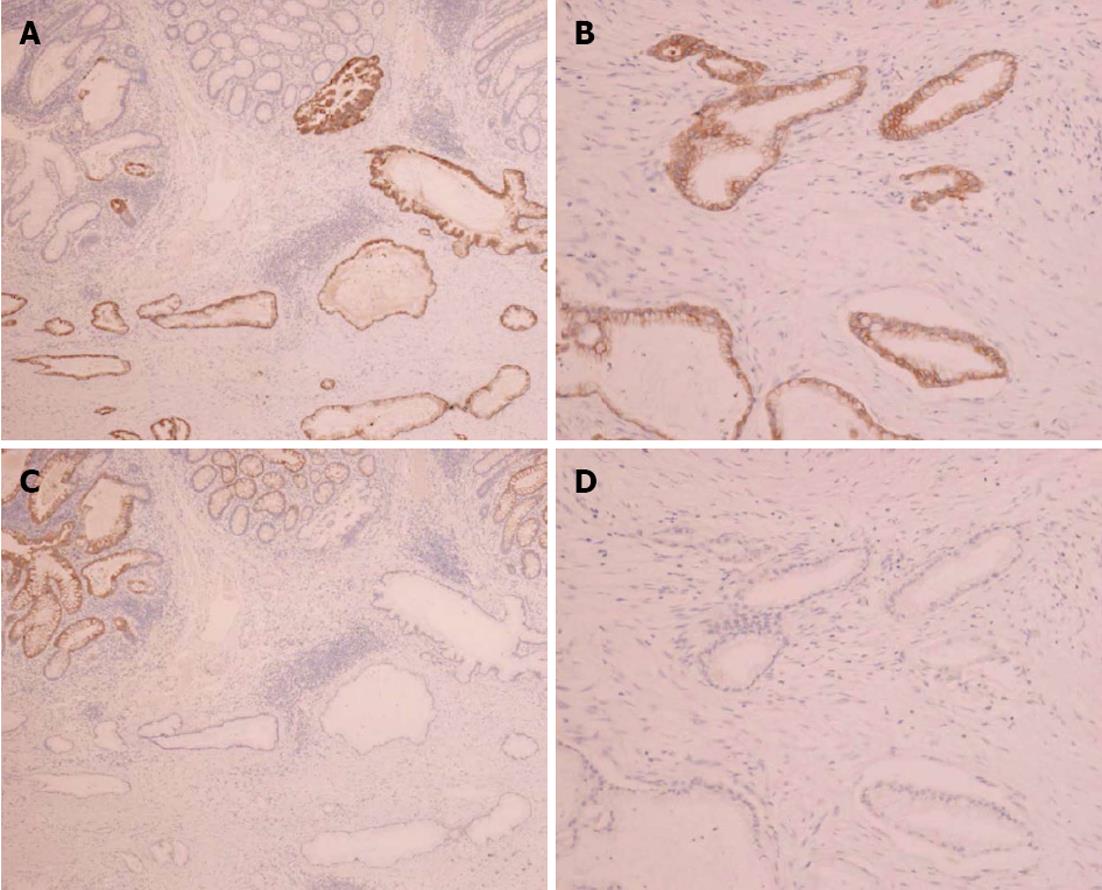 Pancreatic cancers are very aggressive. Less than 10%-15% of cases present with tumors those are localized to the pancreas at the time of diagnosis. The overall survival rate of advanced pancreatic cancer cases is < 5% at five years with most patients dying within the first year[5]. Pancreatic cancer commonly spreads to the liver, lungs, abdomen, regional lymph nodes and peritoneum. Postoperative colonic metastasis from pancreatic cancer is extremely rare, as only two cases have been reported previously in the English literature[2,3].

Colonic metastases from other organs are rare. However, with regard to treatment and prognosis, a correct diagnosis is very important. Colonic metastases from other organs typically present scirrhous morphology[6] and the tumors infiltrate the colon wall in a manner similar to gastric linitis plastica. Specific immunohistochemical staining is useful to diagnose primary tumor sites. Cytokeratin is an intermediate filament protein; cytokeratin 7 is expressed in epithelial cells of the kidney, prostate, pancreas, ovary, lung, and breast, but not in the colon or gastrointestinal tract. However, cytokeratin 20 is expressed in all cases of colorectal carcinomas, 62% of pancreatic carcinoma cases, and 50% of gastric adenocarcinomas[7]. Thus, a combination of cytokeratins 7 and 20 is very useful to distinguish metastatic colon cancer from ovarian[8], breast[9], and primary colon cancers. In two cases, cytokeratin 7 positivity and cytokeratin 20 negativity strongly indicated metastases.

However, in the present case, it was unclear as to how the pancreatic cancer metastasized to the colon. Invasive cancer nests in the muscular layer were conspicuous and the lymph vessels were filled with tumor cells. Only 2 of 28 lymph nodes were positive for metastatic carcinoma. On the basis of these observations, not lymphatic spread but peritoneal (drop-down) metastasis from the pancreas to the colon was assumed as the most likely pathway.

In conclusion, the present report describes a case of colonic metastasis from pancreatic cancer after a pancreatoduodenectomy. Immunohistochemical staining by cytokeratins 7 and 20 were very useful to distinguish metastatic tumors from primary tumors. To our knowledge, this is the third report documenting pancreatic adenocarcinoma metastasizing to the colon by probable lymphatic spread.