RESULTS: Twenty-one patients (87.5%) underwent distal pancreatectomy and 3 patients (12.5%) underwent total pancreatectomy using RAMPS. Nine patients (37.5%) underwent combined vessel resection, including 8 superior mesenteric-portal vein resections and 1 celiac axis resection. Two patients (8.3%) underwent combined resection of other organs, including the colon, stomach or duodenum. Negative tangential margins were achieved in 22 patients (91.7%). The mean tumor diameter for all patients was 4.09 ± 2.15 cm. The 2 patients with positive margins had a mean diameter of 7.25 cm. The mean number of retrieved lymph nodes was 20.92 ± 11.24 and the node positivity rate was 70.8%. The median survival of the 24 patients was 18.23 ± 6.02 mo. Patients with negative margins had a median survival of 21.80 ± 5.30 mo and those with positive margins had a median survival of 6.47 mo (P = 0.021). Nine patients (37.5%) had postoperative complications, but there were no postoperative mortalities. Pancreatic fistula occurred in 4 patients (16.7%): 2 patients had a grade A fistula and 2 had a grade B fistula. On univariate analysis, histologic grade, positive tangential margin, pancreatic fistula and adjuvant therapy were significant prognostic factors for survival.

CONCLUSION: RAMPS is a feasible procedure for achieving negative tangential margins in patients with carcinoma of the body and tail of the pancreas.

Distal pancreatectomy, originally described at the Mayo Clinic in 1913, has been the standard procedure for carcinoma of the body or tail of the pancreas[1]. This traditional approach is, however, associated with a high tangential margin positive rate and is not based on the physiologic lymphatic drainage of the pancreas[2]. So far, there has been little progress in overcoming these shortcomings. Radical antegrade modular pancreatosplenectomy (RAMPS), which was first introduced by Strasberg et al[3] in 2003 as a surgical treatment for carcinomas of the body and tail of the pancreas, is known as a feasible procedure for achieving a higher rate of negative tangential margins than the traditional approach. RAMPS is performed in a right-to-left fashion after early ligation of blood vessels, whereas pancreatosplenectomy is performed in a left-to-right fashion. In fact, RAMPS improves the tangential margin negative rate and provides better surgical exposure, especially in obese patients[3].

The operation was performed according to the procedure introduced by Strasberg et al[2]. After dissection of the gastro-colic ligament, we entered the lesser omentum and dissected the celiac axis, hepatic artery, and trunk of the splenic artery to divide the splenic artery. The neck of the pancreas was divided using electrocautery, and the pancreatic duct stump was ligated. After we divided the neck of the pancreas, the vertical plane of dissection reached the level of the aorta where the left renal vein was exposed. The left adrenal vein was ligated and divided when a posterior RAMPS was performed. During lymph node dissection, we removed regional nodes along the common hepatic and celiac artery. The soft tissue to the left of the hepatoduodenal ligament and superior mesenteric artery was also dissected. Lymph nodes along the splenic artery and splenic hilum were removed en-bloc with the specimen. Removal of the nerve plexus and lymph nodes was performed in the same manner (Figure 1).

We performed adjuvant concurrent chemoradiation therapy (CCRT) on all patients without severe medical comorbidities or poor physical status. Several studies have demonstrated the positive effects of CCRT[7-17]. Twenty patients (83.3%) underwent adjuvant CCRT using multiple-field techniques. The initial irradiated field, which was defined as the tumor bed plus regional nodes, received 45 Gy in 25 fractions using a 4-field technique (anteroposterior, posteroanterior and paired laterals) with 15-MV X-rays. The tumor bed boost field received an additional 5.4-10.8 Gy in 3 to 6 fractions of 1.8 Gy. Concomitant 5-fluorouracil-based chemotherapy during radiotherapy was given to all patients. Patients were followed every 3 mo with CT scans and tumor marker levels to detect recurrent disease.

The χ2 test, the independent t test, the Kaplan-Meier method with the log-rank test and a Cox regression model were used for statistical analysis. A P value of less than 0.05 was considered significant. SPSS® version 19.0 (Chicago, IL, United States) was used for all statistical analyses. This study was approved by the Institutional Review Board of the National Cancer Center in South Korea.

The mean age of the total 24 patients was 60.00 ± 7.79 years with a male:female ratio of 1.18:1. The mean operative time was 305.42 ± 155.68 min. One patient required a blood transfusion during surgery. Three patients (12.5%) who had cancer in the body of the pancreas with diffuse infiltration into the head and tail were converted to a total pancreatectomy. Nine patients (37.5%) underwent combined vessel resection, including 8 superior mesenteric-portal vein (SMV-PV) resections and 1 celiac axis resection. Two patients (8.3%) underwent combined resection of other organs, including the colon, stomach or jejunum. Posterior RAMPS, including resection of the adrenal gland, was performed in 5 patients (20.8%).

Histopathologic examination showed that 21 cases (87.5%) were T3. As for histologic grade, moderately differentiated adenocarcinoma was found in 17 patients (70.8%). The mean number of retrieved lymph nodes was 20.92 ± 11.24 and node positivity was observed in 17 patients (70.8%). The pancreatic parenchymal resection margin was negative for all patients with a mean distance of 16.52 ± 13.8 mm. Negative tangential margins were obtained in 22 patients (91.7%). The mean tumor diameter of all patients was 4.09 ± 2.15 cm. Two patients with positive tangential margins had a mean tumor diameter of 7.3 cm (Table 1). Among 9 patients with combined vessel resection, 1 patient had no evidence of vascular invasion on pathology.

Nine patients (37.5%) had postoperative complications (Table 2). Pancreatic fistula occurred in 4 patients (16.7%): 2 patients had a grade A fistula and 2 had a grade B fistula. Intra-abdominal fluid collections and grade B pancreatic fistulae were treated with percutaneous drainage and intravenous antibiotics. Patients with PV-SMV thrombosis were treated with percutaneous thrombectomy and stenting. There were no postoperative mortalities. 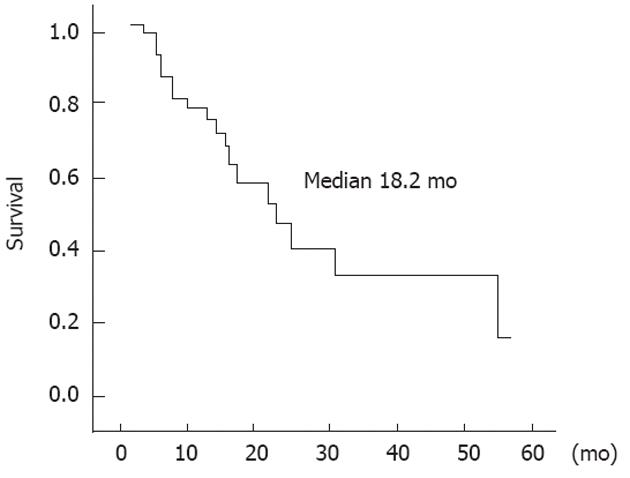 Celiac axis resection (Appleby operation) was performed in 1 patient who died of recurrent disease 12.5 mo after surgery. Three patients who underwent total pancreatectomy had a median survival of 21.23 ± 4.25 mo which was similar to the median survival of all patients in this study. One patient was free of cancer at his last visit, while the other 2 patients had local or systemic recurrence.

Because carcinomas of the body and tail of the pancreas are often found in a larger size than those of the head, unresectable cases are more common and the recurrence rate after resection is also higher[18-22]. The goals of pancreatic cancer surgery are to obtain tumor-free margins and perform a sufficient regional lymphadenectomy. However, conventional distal pancreatectomy, which is performed in the left-to-right direction along the anterior border of Gerota’s facia, is inappropriate for achieving this goal because the tumor easily infiltrates the retroperitoneum and spreads to lymph nodes at an early stage. There have been few surgical methods to overcome these limitations. Yang et al[23] introduced retrograde distal pancreatectomy, which cuts the neck of the pancreas first and proceeds with dissection in the right-to-left direction. This procedure is a useful method for exposing the portal-superior mesenteric vein junction, which helps to avoid operative injuries. RAMPS was introduced with the theoretical advantages of obtaining a higher rate of negative tangential margins and a higher lymph node count. Therefore, we applied RAMPS to all distal pancreatectomy cases.

The margin-negative rate of RAMPS reported by Strasberg et al[2] and our institute was 91% and 91.7%, respectively, which is higher than the margin-negative rate of conventional distal pancreatectomy (70% to 80%)[5,7,8]. In our study, only 2 patients showed positive resection margins. These 2 patients had a lower median survival than patients with negative margins (6.47 mo vs 21.80 ± 5.30 mo, P = 0.03). The first patient with a positive tangential margin underwent posterior RAMPS and was stage T3N1 with a tumor size of 10.5 cm. He received adjuvant CCRT after recovering from grade B pancreatic fistula, but had multiple liver metastases at follow-up and survived 6.5 mo. The second patient underwent anterior RAMPS with combined jejunal resection due to gross invasion. He had stage T3N0 disease with a tumor size of 4.0 cm. He had both local recurrence and distant metastasis after adjuvant CCRT and survived 19.0 mo.

Radical antegrade modular pancreatosplenectomy (RAMPS) is known as a feasible procedure for achieving a higher rate of negative tangential margins than the traditional approach. Although RAMPS is widely performed, there have been few studies on its clinical outcomes.

RAMPS was first introduced in 2003 as a surgical treatment for carcinomas of the body and tail of the pancreas.

RAMPS seems to be a feasible procedure for achieving negative tangential margins for patients with carcinoma of the body and tail of the pancreas.