Spontaneous hemoperitoneum (SP) is defined as the presence of blood within the peritoneal cavity that is unrelated to trauma. Although there is a vast array of etiologies for SP, primary hepatocellular carcinoma and hepatic adenoma are considered to be the most common causes. Hepatic metastatic tumor associated with spontaneous rupture is rare. SP from hepatic metastatic trophoblastic tumor may initially present with a sudden onset of abdominal pain. Abdominal computed tomography (CT) plays an important role in establishing the diagnosis of SP, indicating its origin and etiology, and determining subsequent management. Herein, we report an uncommon case of hemoperitoneum from spontaneous rupture of a hepatic metastatic trophoblastic tumor in a young female patient. Interestingly, the contrast-enhanced CT findings demonstrated hypervascular hepatic masses with persistent enhancement at all phases, which were completely different from the common appearances of hepatic metastases. For SP resulting from hepatic metastatic tumors, surgical intervention is still the predominant therapeutic method, but the prognosis is very poor.

A 24-year-old girl was admitted to our emergency department because of sudden onset of abdominal pain, and emergent non-enhanced CT scan showed intrahepatic multiple lesions associated with rupture and bleeding into the peritoneal cavity (Figure 1). Three months ago, she underwent splenic repair, and her family could not tell about the specific cause even after she was discharged from the hospital. She had a history of pregnancy and abortion two years ago. Physical examination on admission was unremarkable except for mild epigastric tenderness and longitudinal abdominal scar. At exploratory laparotomy, there was dark red blood in the abdominal cavity. After cleaning of the blood, multiple cystic masses bulging from the surface of the liver were found, one of which was ruptured and then removed for pathological analysis. Her serum beta human chorionic gonadotropin (β-HCG), alpha-fetoprotein (AFP) and cancer antigen-125 (CA-125) levels were 94 mIU/mL (reference range: 0-6 mIU/mL), 1.01 ng/mL (reference range: < 7.0 ng/mL) and 46.86 ng/mL (reference range: < 3.4 ng/mL), respectively. Post-operative contrast-enhanced CT of abdomen showed multiple hepatic hypervascular masses keeping the similar enhancement with abdominal aorta in all phases (the diameter of the masses ranged from 0.8 cm to 2.8 cm) and arterioportal shunts (Figures 2, 3A and B). CT scan of the chest and pelvis revealed no abnormalities. Histopathological examination confirmed the tumor to be predominantly composed of mononuclear epithelioid cells with pink cytoplasm and large, irregularly shaped nuclei with prominent nucleoid (Figure 4). Immunostaining was positive for placental alkaline phosphatase (Figure 5), while negative for HepPar-1, smooth muscle actin. Hepatic metastatic trophoblastic tumor was diagnosed by histopathological examination and immunohistochemical analyses. No abnormality was found in the all-round gynecological checkup, especially in the uterus. The patient refused to chemotherapy and died a month later despite of receiving supportive treatment. Her family refused the autopsy. 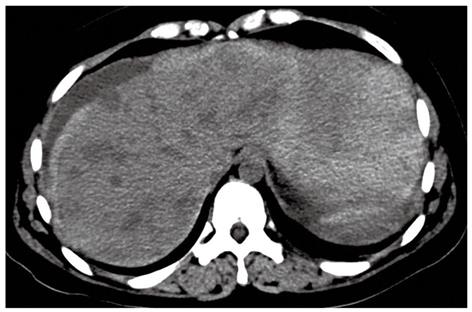 Figure 1 Axial computed tomography showing multiple hypodense nodules in the liver and hemoperitoneum around the liver and spleen. 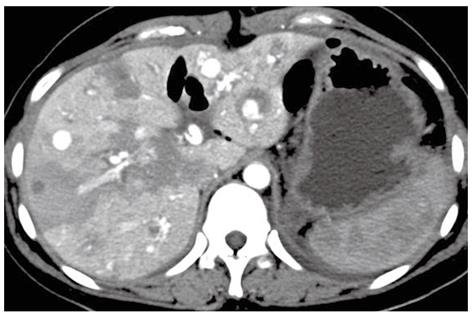 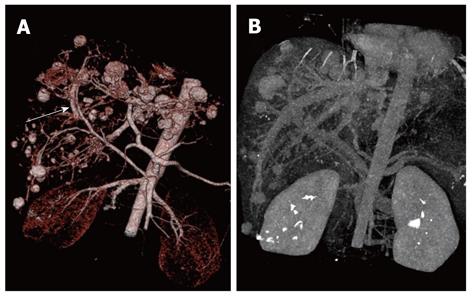 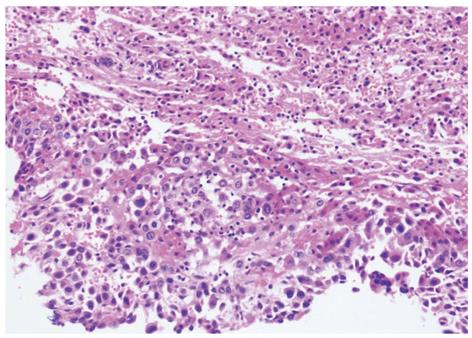 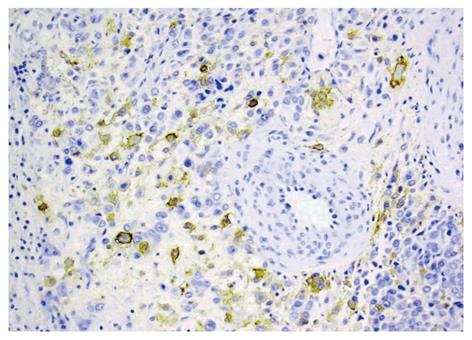 SP, an uncommon cause of acute abdominal pain, is defined as the presence of blood within the peritoneal cavity that is unrelated to trauma. Its occurrence may be catastrophic. There are various causes for SP, such as hepatic, splenic, gynecological and vascular involvement, and altered coagulation status[1,2]. Therefore, underlying causes must be identified if the patient survives the initial events. As for hepatic causes, previously undetected liver lesion may be a relatively common cause of spontaneous rupture leading to hemoperitoneum, and unnoticeable minor trauma may be the precipitating factor. Hepatic adenoma and HCC developed from cirrhosis are the most common causes for SP[3,4], however, hepatic metastatic tumor associated with SP is rare, as most of them tend to be less invasive, and have less blood vessels and less propensities to penetrate the liver capsule as compared with HCC. In our case, hepatic metastatic tumor associated with SP was due to the rupture of hepatic metastasis of a trophoblastic tumor with hypervascularity, which was seldom found responsible for SP in clinical practice.

The mechanism for the rupture of hepatic metastasis remains unclear, but the large lesion adjacent to the liver capsule is at the greatest risk due to direct pressure against the capsular surface, especially in increased intra-abdominal pressure. Acute hemoperitoneum as a result of hemorrhage from liver metastasis is an uncommon but a terminal event. In a large report of 70 patients with SP, metastatic disease was only found responsible for one case[5]. Those metastatic lesions may include colon, lung, renal cell, testicular tumors, and Wilm’s tumor[6-8]. So, a thorough search should be made for evidence of a primary tumor that may have metastasized to the liver. However, hepatic involvement from trophoblastic tumor accounts for only 10% of the patients and occurs in the late course of the disease. Regression of a primary tumor after it has metastasized is not uncommon, and one-third of cases manifests as complications of metastatic diseases[9].

The available imaging modalities used for the diagnosis of SP include sonography, CT and magnetic resonance imaging. Meticulous imaging technique and careful observation of key imaging features are important for accurate characterization of the organ origin of the spontaneous bleeding. Currently, CT scan is the most frequently used modality in evaluating the patients with suspected hemoperitoneum[2,10,11]. Emphasis should be laid on detecting hemoperitoneum, then localizing the source of bleeding and finally detecting the primary cause. On CT imaging, the appearance of blood within the peritoneum varies depending on the site and the extent of bleeding, and the age of blood. If the time interval between bleeding and imaging is several hours, high attenuation clot may be seen. Over the next few days, the attenuation of the blood decreases, which becomes similar to simple fluid after 2-3 wk. High attenuation clots may appear at the site of the bleeding and suggest a clue as to the site of the bleeding origin. Once the presence of hemoperitoneum has been identified or active bleeding is controlled, a comprehensive search should be made further for an underlying cause. This may start with a careful evaluation of the liver and spleen, because they are the most common organs responsible for spontaneous bleeding. If the SP is derived from a hepatic or splenic cause, the peritoneal blood may be centered around the responsible lesion[12,13], as described in our case. Although hepatic metastases can come from many locations of the body, SP secondary to metastases exhibit similar findings on non-enhanced CT scan.

Dramatic advance in multi-detector technology has significantly improved the accuracy of CT and dynamic contrast-enhanced CT scan which can identify imaging characteristics of intrahepatic lesions, especially the rare appearances from uncommon disease entity. Metastatic tumors of liver present with intra-liver occupied lesions on unenhanced CT scan, including multi-nodules similar to the “bull’s eye” sign, homogenized low-density mono-nodule, equal- or high-density mass and cystic lesion. Appearances of dynamic contrast-enhanced CT scan for these disease entities may have variant enhancement patterns according to the vascularity of the primary tumor and are often classified as hypervascular, hypovascular and nonvascular metastases. Most of hepatic metastatic tumors show mild enhancement in the portal phase and delayed phase consistent with hypovascular lesions, while there were typically unusual presentations in our patient, which showed the synchronized enhancement with abdominal aorta in all phases. The similar case is extremely rare in the reported literature. Therefore, for a female patient in child-bearing age who presents with SP and unusual contrast-enhanced CT findings similar to our patient’s, we should be alert to the possibility of the spontaneous rupture of metastatic trophoblastic disease in the liver, even though the primary lesion is not found on that occasion.

Prognosis of patients with rupture hepatic metastasis of trophoblastic disease is extremely poor, and the choice of treatment depends on the tumor size, tumor location, severity of bleeding and the general condition of the patient. Surgery and embolisation with or without chemotherapy are the mandatory therapeutic choices[14,15]. Because of the severe condition of our patient, transcatheter arterial chemotherapeutic embolization is abortive.