Ischemic colitis is a rare complication of interferon administration. Only 9 cases in 6 reports have been described to-date. This report describes a case of ischemic colitis during pegylated interferon and ribavirin treatment for chronic hepatitis C, and includes a review of the relevant literature. A 48-year-old woman was treated with pegylated interferon α-2a and ribavirin for chronic hepatitis C, genotype Ib. After 19 wk of treatment, the patient complained of severe afebrile abdominal pain with hematochezia. Vital signs were stable and serum white blood cell count was within the normal range. Abdominal computed tomography showed diffuse colonic wall thickening from the splenic flexure to the proximal sigmoid colon, which is the most vulnerable area for the development of ischemic colitis. Colonoscopy revealed an acute mucosal hyperemic change, with edema and ulcerations extending from the proximal descending colon to the sigmoid colon. Colonic mucosal biopsy revealed acute exudative colitis. Polymerase chain reaction and culture for Mycobacterium tuberculosis were negative and the cultures for cytomegalovirus, Salmonella and Shigella species were negative. After discontinuation of interferon and ribavirin therapy, abdominal pain and hematochezia subsided and, following colonoscopy showed improvement of the mucosal ulcerations. Ischemic colitis cases during interferon therapy in patients with chronic hepatitis C reported so far have all involved the descending colon. Ischemic colitis is a rarely encountered complication of interferon administration in patients with chronic hepatitis C and should be considered when a patient complains of abdominal pain and hematochezia.

Pegylated interferon (IFN) combined with ribavirin is currently the standard treatment for chronic hepatitis C (CHC) and can achieve sustained virological response in approximately 55% of genotype-I hepatitis C virus (HCV) infections[1]. The side effects of this combination treatment result in premature treatment termination in 10%-15% and dose adjustment in 32%-42% of patients[1]. Therefore, physicians need to be well aware of both the common and uncommon side effects of treatment. Ischemic colitis is a rare complication of interferon administration[2]. Only 9 cases in 6 reports (one in Japanese[3] and 5 in English[2,4-7]) have been described to date. This report describes a case of ischemic colitis during pegylated interferon and ribavirin treatment for CHC and includes a review of the relevant literatures.

A 48-year-old woman was admitted for the evaluation of acute abdominal pain and hematochezia. The patient had been treated with combination therapy of pegylated IFN-α 2a (180 μg/wk) (Pegasys; Roche, Basel, Switzerland) and ribavirin (1000 mg/d) (LG Ribavirin; LG Life Sciences, Seoul, Korea) for CHC, genotype Ib. A qualitative HCV test was initially obtained using reverse transcription-polymerase chain reaction (RT-PCR) (Abbott Laboratories, Abbott Park, IL, United States), and the serum HCV viral load was 1.67 × 106 viral copies/mL. The serum HCV RNA level decreased to undetectable levels after 12 wk of treatment. The treatment process was uneventful until 16 wk of therapy. At week 16, the patient complained of mild epigastric discomfort and nausea, which resolved spontaneously a few days later. Three weeks later, at week 19 of therapy, the patient complained of severe abdominal pain with hematochezia, but she remained afebrile. Small amounts of bloody stool were passed 2-3 times per day. The patient denied recent travel or additional medications such as antibiotics or non-steroidal anti-inflammatory drugs. The patient had no history of diabetes mellitus, hypertension, inflammatory bowel disease, atrial fibrillation, valvular heart disease, coronary artery disease, or hypercoagulable conditions. She was a non-smoker, and her family history was unremarkable.

Physical examination revealed direct tenderness on the left lower quadrant of the abdomen. Blood pressure was 114/76 mmHg, pulse 80 beats/min, respiration rate 20/min, and body temperature 37.9  °C. Complete blood count revealed a hematocrit of 26.9%, hemoglobin 8.7 gm/dL, platelets 115  000/μL, and white blood cell count 4700/μL with differential counts within the normal range. C-reactive protein was slightly elevated at 0.7 mg/dL (normal < 0.4 mg/dL). Serum electrolytes, liver profile, renal function tests, amylase, and lipase were within normal limits. The coagulation profile was within the normal range, with a prothrombin time of 11.2 s and an activated partial thromboplastin time of 23.9 s. Upper endoscopy was performed 6 mo prior to admission, which documented a healing stage small gastric ulceration at the antrum. Helicobacter pylori infection was documented by histological examination and was successfully eradicated with antibiotic therapy at that time. At admission, upper endoscopy was negative for an active bleeding source, and colonoscopic examination revealed acute hyperemic mucosal changes with edema, erosion, and ulcerations. Acute inflamed, friable mucosal changes extended from the sigmoid colon (Figure 1A) to the proximal descending colon (Figure 1B). The rectum showed relatively normal mucosa. Colonic mucosal biopsy revealed acute exudative colitis compatible with a diagnosis of ischemic colitis (Figure 1C). On the biopsy specimen, staining for cytomegalovirus showed no positive cells, and staining for acid-fast bacilli was negative. Tuberculous nucleic acid was undetectable by polymerase chain reaction. A serum anti-Streptolysin O test was negative. Bacteriologic culture studies of stool and colonic fluid were negative for Mycobacterium, Salmonella, and Shigella species. Abdominal computed tomography showed circumferential wall thickening and pericolic fat infiltration from the descending colon to the proximal sigmoid colon, a well-known predisposing area for the development of ischemic colitis (Figure 2). The findings from colonoscopy, computed tomography, and pathology were all compatible with the diagnosis of ischemic colitis. 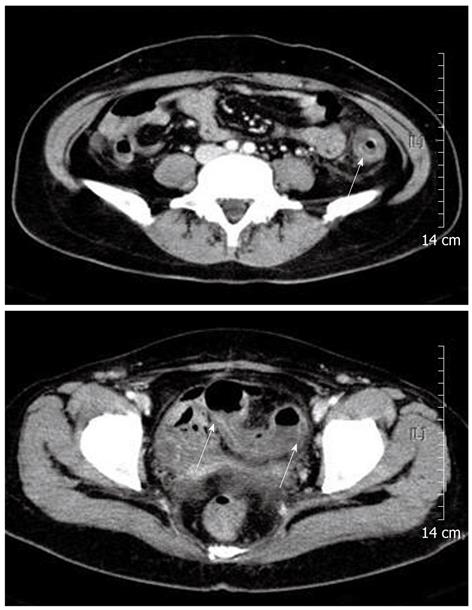 After IFN and ribavirin treatment were discontinued, the patient’s abdominal pain decreased and hematochezia resolved. One week later, subsequent colonoscopy showed marked improvement in ulceration and mucosal edema. Serum HCV RNA remained undetectable for up to 3 mo after cessation of treatment, but reappeared 1 year later. The reappearance of serum HCV RNA suggests that the antiviral treatment for CHC was not successful.

In current standard combination therapy of pegylated IFN and ribavirin in CHC patients, more than 50% of sustained virological response is expected. However, a large proportion of the patients are not eligible for the treatment or drop out early during the treatment due to side effects.

The side effects of IFN and ribavirin combination therapy are mostly associated with IFN administration, while hemolytic anemia is attributable to ribavirin[1]. Side effects associated with IFN treatment have been described not only in CHC, but also in chronic hepatitis B[8], chronic myeloid leukemia[9], metastatic renal cell carcinoma[10], and multiple myeloma[11]. Flu-like symptoms such as general malaise, fever, arthralgia, headache, and hematologic abnormalities such as leukopenia and thrombocytopenia are frequently observed early adverse effects of IFN-α administration[2]. Although the severity of these symptoms is directly related to the dose and frequency of IFN administration, remarkable individual variation has been observed[2]. Among the various gastrointestinal side effects of IFN-α, ischemic colitis is rarely reported during treatment of CHC, occurring in less than 1% of patients[12]. Other than ischemic colitis, microscopic colitis[7] and ulcerative colitis[13] have also been reported.

Nine cases of ischemic colitis related to IFN therapy in CHC have been reported in 6 studies, and the most common symptoms were abdominal pain and lower gastrointestinal bleeding such as melena and hematochezia[2-7]. The descending colon was most frequently involved in all ischemic colitis cases associated with CHC (Table 1). In reported cases, hematochezia and melena appeared between week 4 and 34 of IFN treatment, and the mean duration of IFN treatment before the occurrence of ischemic colitis was 14 wk. The characteristics of this case correspond well with those of previously reported cases in terms of symptoms, location, and period of duration.

The etiology of ischemic colitis is not yet clearly elucidated. The mechanism of IFN-induced ischemic colitis is thought to be associated with immune modulation of cytokine networks. Sparano et al[10] documented the role of interleukin-2 (IL-2) and IFN-α in the development of colonic ischemia. They suggested that a disordered coagulation cascade played a role in the pathogenesis of colonic ischemia, assuming that derangement of coagulation is mediated by tumor necrosis factor or its interactions with other cytokines[10]. IFN therapy also induces an increase in plasma-activated complement C5a, a potent intravascular aggregator of granulocytes, favoring the development of microthrombi in small vessels. IFN-induced vasculitic reactions, mediated by the deposition of immune complexes in the vasculature, may also play a pathogenic role in ischemia of various organs[14,15]. Thrombogenic effects of activated cytokines and immune complex-mediated vasculitic reactions may play a role in the pathogenesis of IFN-induced ischemic colitis[14]. The potential role of cytokines for the development of IFN induced ischemic colitis needs to be investigated further.

In conclusion, physicians should be vigilant of the various common and uncommon complications of both pegylated IFN and ribavirin. Ischemic colitis is a rarely encountered complication of pegylated IFN administration but it should be considered when a patient complains of abdominal pain and hematochezia.