Eosinophilic esophagitis (EE) is the most frequent condition found in a group of gastrointestinal disorders called eosinophilic gastrointestinal diseases. The hypothetical pathophysiological mechanism is related to a hypersensitivity reaction. Gastroesophageal reflux disease-like complaints not ameliorated by acid blockade or occasional symptoms of dysphagia or food impaction are likely presentations of EE. Due to its unclear pathogenesis and unspecific symptoms, it is difficult to diagnose EE without a strong suspicion. Although histological criteria are necessary to diagnosis EE, there are some characteristic endoscopic features. We present the case of a healthy 55-year-old woman with dysphagia and several episodes of esophageal food impaction over the last six months. This case report stresses the most distinguishing endoscopic findings-mucosa rings, white exudative plaques and linear furrows-that can help in the prompt recognition of this condition.

Eosinophilic gastrointestinal diseases (EGD) are rare conditions of growing interest due to their increasing diagnostic frequency in well developed countries[1]. Eosinophilic esophagitis (EE) is the most common EGD, and its clinical presentation varies extensively making the diagnosis difficult and clinical suspicion fundamental. Although not entirely clear, given that EE correlates with other atopic disorders and has a good response to corticoid treatment, it seems that its pathophysiological mechanism is related to a hypersensitivity reaction[1].

In this case report, through several expressive images, we highlight the set of endoscopic features which helped in the early recognition of EE.

A 55-year-old woman with no previous medical history presented with dysphagia and several episodes of esophageal food impaction over the last six months. Upper gastrointestinal (GI) endoscopy revealed scattered white plaques in the proximal esophagus (Figure 1A), a whitish exudate coating the mucosa in the distal part of the esophagus (Figure 1B), and characteristic images of concentric transient rings and linear furrows (Figure 1C). Biopsy specimens showed dense eosinophilic infiltrates, > 20 eosinophils/high power field (HPF) and microabscesses (Figure 2A and B). Gastroesophageal reflux disease (GERD) was excluded when no improvement was observed following the administration of a proton pump inhibitor (PPI). The patient started treatment with a budesonide inhaler twice daily (instructions to swallow) and experienced symptom relief.

Figure 1 A 55-year-old woman presented with dysphagia and several episodes of esophageal food impaction over the last six months. A: Scattered white plaques in the proximal esophagus; B: Whitish exudate coating the mucosa in the distal part of the esophagus; C: Concentric transient rings and linear furrows on esophagoscopy. 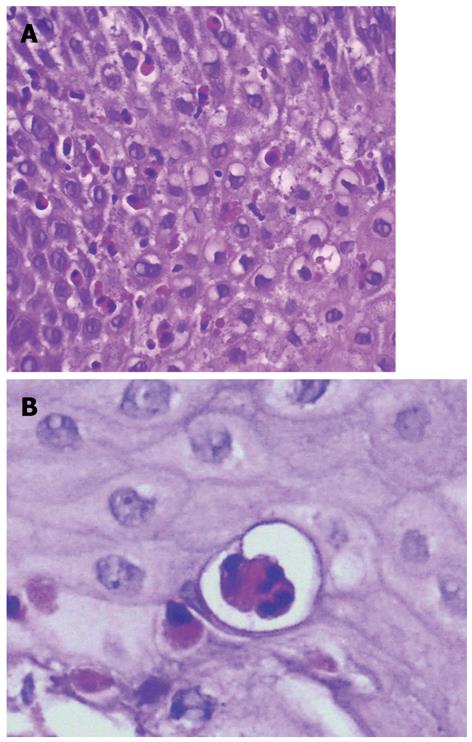 EE is part of a group of disease known as the eosinophilic gastrointestinal disorders. The pathogenesis of EE is not yet understood, although it appears to be related to a hypersensitivity reaction. Some studies suggest that increased mucosa permeability allows contact with potential allergenic digestion products leading to a consequent immunologic response[2]. EE tends to be a chronic disorder with intermittent or persistent symptoms, usually GERD-like complaints which are not ameliorated by acid blockade with PPI. Additionally, patients may present with symptoms of dysphagia or food impaction. Due to its unspecific esophageal symptoms, clinical suspicion is critical in the diagnosis of EE. Although endoscopy may be normal in one third of cases, images of mucosal rings, white exudative plaques and esophageal strictures are characteristic findings of this pathology. Nevertheless, multiple biopsies should be performed in different esophageal locations, as well as in the stomach and duodenum as the diagnosis of EE relies on histological criteria-one HPF must contain, at least, 15 intraepithelial eosinophils. Additional histological features include eosinophilic microabcesses[1,3].

To date, there are no large randomized controlled trials on EGD treatment. The majority of data are from smaller studies where corticosteroids play a role in the treatment of these disorders. Generally, oral or topical corticoid therapy is given to the patient for at least eight weeks followed by a gradual taper. The symptoms usually recur, suggesting the need for continuous therapy. Some case reports show evidence of better symptom control following maintenance treatment with mast cell inhibitors or leukotriene receptor antagonists, however, larger trials are needed[2,3].