AIM: To investigate the cytotoxic effects of spray-dried extracts of Phyllanthus niruri in combination with cisplatin on two cancer cell lines.

METHODS: Colorectal carcinoma (HT29) and human hepatocellular carcinoma (HepG2) cells were treated with spray-dried extracts of Phyllanthus niruri (SDEPN) either alone or in combination with cisplatin at different concentrations (0.5 mg/mL and 1 mg/mL) for 4 h and 24 h. To verify and quantify cancer cells treated with these products as well as identify the cell cycle stage and cell viability, we stained the cells with propidium iodide and assessed them by flow cytometry. The percentage of cells in different cell cycle phases was quantified and data were expressed as histograms. Significant differences between groups were determined using analysis of variance and Bonferroni’s test, as indicated. A value of P < 0.05 was considered to be statistically significant.

CONCLUSION: SDEPN is selectively toxic against two cancer cell lines. Moreover, SDEPN in combination with cisplatin induces a synergistic increase in the cell death of both HT29 and HepG2 cells.

Phyllanthus niruri has many effective traditional uses for a wide variety of diseases. Some of the medicinal uses have been supported in experimental models, suggesting that the plant extracts possess various pharmacological properties. Due to its impressive preclinical therapeutic potential, extracts of species of the genus Phyllanthus have been evaluated to treat hypertension, jaundice, diabetes, hypercalciuria, and urolithiasis[1]. Other studies revealed preclinical pharmacological activity and therapeutic potential of phytochemicals isolated from Phyllanthus niruri. The species has demonstrated an antimutagenic and anticarcinogenic action[2], antitumor[3], antioxidant[4], hepatoprotective[5,6] and antihyperuricemic properties[7], as well as antihyperlipemic activity[8,9].

More importantly, no side effects or toxicities have been reported for this herb after many years of research. Although extensive research has been conducted, there is still an abundance of unanswered questions regarding Phyllanthus niruri, particularly towards understanding the mechanism of biological activity of phytochemicals from the herb with emphasis on components that have anti-human immunodeficiency virus (HIV)[21] and anti-hepatitis B[22] properties. Phyllanthus niruri has been found to exhibit a marked inhibitory effect on the hepatitis B virus, as evidenced by its exhaustive utility in cases of chronic jaundice. However, to date, no research has focused on the identification and validation of active pharmacophores of Phyllanthus niruri that are responsible for the reported inhibitory effect of its aqueous extract on HIV[21]. Investigations have examined anti-HIV effects of the alkaloidal extract from Phyllanthus niruri on human cell lines. An alkaloidal extract of Phyllanthus niruri showed suppressive activity on strains of HIV-1 cultured on the huT-4 cell line[21].

Directed studies of botanical extracts may lead to the discovery of new agents with improved and intriguing pharmacological properties. This may be achieved by molecular modeling studies that assess the interactions of bioactive phytochemicals from Phyllanthus niruri with their respective molecular targets. Moreover, upon improvement of binding affinity to the specified target by virtual chemical modification of existing pharmacophores, new small molecules may be identified and synthesized in the laboratory[23].

Other species of the genus Phillantus, such as Phyllanthus polyphyllus and Phyllanthus emblica, have demonstrated growth inhibitory activity with a certain degree of selectivity towards the two cancer cell lines tested. It has been previously shown that cisplatin can inhibit the growth of colorectal carcinoma (HT29) and human hepatocellular carcinoma (HepG2) cells in a dose-dependent manner[20,24,25].

In this study, we investigated the antiproliferative or cell-killing activities of spray-dried extracts of Phyllanthus niruri on the human colorectal carcinoma HT29 and human hepatocellular HepG2 cell lines. In addition, we assessed the capacity of these extracts to potentiate the action of cis-diamminedichloroplatinum II (cisplatin).

To verify and quantify cells treated with SDEPN extract and to identify the cell cycle stage and cell viability, we stained cells with propidium iodide (PI). PI emits different fluorescence intensities depending on the phase of the cell cycle, which in turn are captured by the photomultiplier detectors in a flow cytometer (BD Facscanto II). Cancer cells were plated in 6-well plates at a cell density of 5 × 105 cells/well in 2 mL of medium. Cells were treated with SDEPN alone, cisplatin alone, or SDEPN followed by cisplatin. After 24 h, the cells were treated with a series of SDEPN concentrations (0-75 mmol/L) for 4 h or 24 h. After this incubation, the medium containing SDEPN was replaced with medium containing 2.5 or 12 μmol/L cisplatin. The cells were harvested by trypsinization when they reached approximately 80% confluence. The cells were placed in 70% ethanol and centrifuged for 5 min at 300 g. They were then resuspended in 200 μL of a PI solution (20 mL PBS, 20 μL 0.1% Triton X-100, 200 mg/mL RNase, and 20 μg/mL PI), placed in FACS tubes, and incubated for 30 min at room temperature protected from light. The labeled cells were captured with a FACScalibur cytometer (BD Bioscience, Franklin Lakes, NJ, United States) and analyzed with the software CELLQuest™ (BD Biosciences). The percentage of cells in different cell cycle phases was quantified and data were expressed as histograms.

All experiments were performed at least in triplicate. The significance of differences between groups was calculated by applying analysis of variance and Bonferroni’s test, as indicated. A value of P < 0.05 was considered to be statistically significant.

RESULTS
Cytotoxic effects of SDEPN on HT29 and HepG2 cells 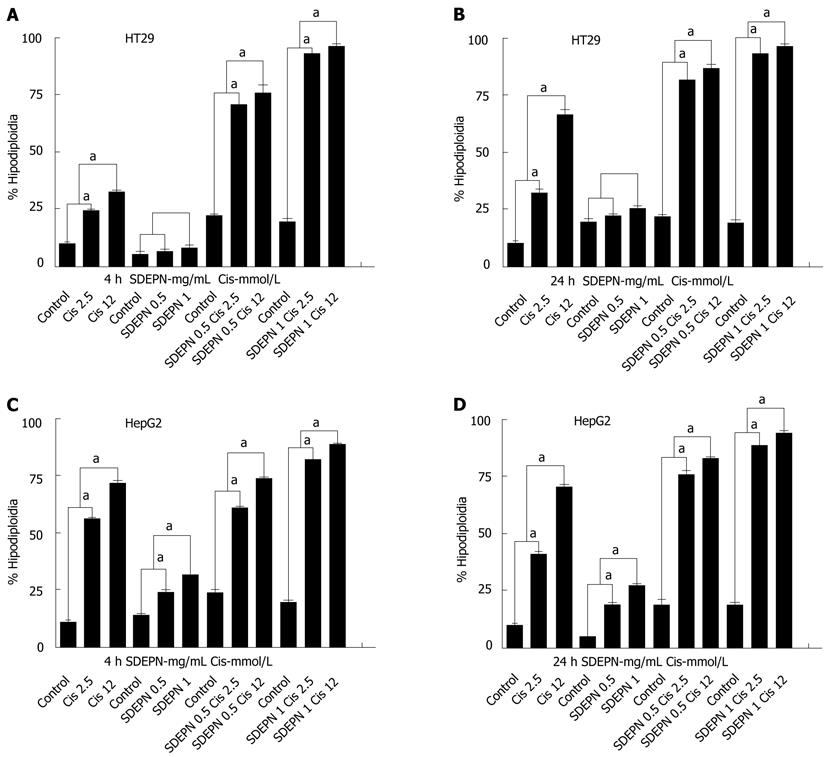 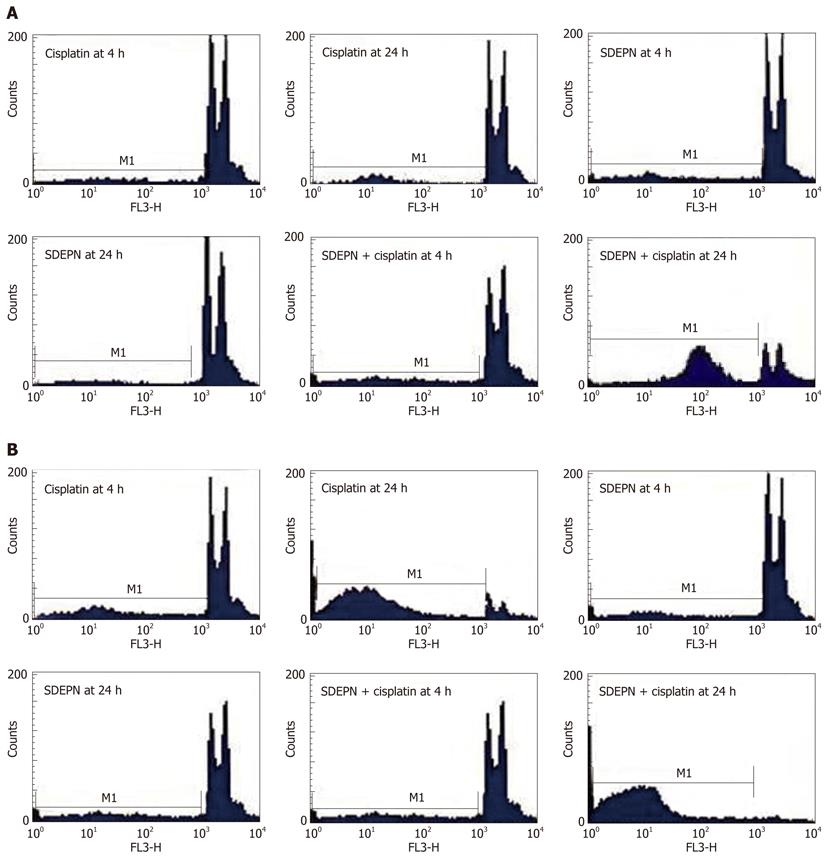 Figure 2 Effects of cisplatin, spray-dried extract of Phyllanthus niruri, or both on HT29 cells or HepG2 cells as assessed by flow cytometry. A: HT29 cells; B: HepG2 cells.
The effect of cisplatin on HT29 and HepG2 cells

Cisplatin is a well-known cancer therapeutic agent that causes high toxicity to normal tissues during cancer therapy, inducing cell death through interaction of the platinum complex with DNA molecules which induces crosslinking in DNA[28,29]. The platinum compound is used to treat various types of human solid tumors[30]. The major limitation to clinical use of cisplatin is the adverse effects, mainly nephrotoxicity, caused by the compound[31]. In addition to DNA interactions, cisplatin is capable of generating oxidative stress through mitochondrial dysfunction, which results in the increased production of reactive oxygen species (ROS)[32]. Therefore, our data show that HT29 cells are more resistant to SDEPN- or cisplatin-mediated cell death, and this resistance may be related to their ability to adapt to stressful conditions. In addition, HepG2 cells were more sensitive to both treatments, suggesting that these cells may be less adapted to stress. In this study we found that the combination of SDEPN with cisplatin induced growth inhibition and cell death at different dose levels in HT29 and HepG2 cell lines.

The mechanism of action of some plant extracts is still unclear, since they are not a single active ingredient but rather consist of multiple compounds that could potentially induce the observed effects[1,23]. Plant-derived polyphenols, including gallic acid[33,34] and tannins[35], were reported to be the main components of Phyllanthus niruri extracts[1]. Therefore, the effects of SDEPN may induce apoptosis and cell death in the cell lines used in this study through multiple pathways due to the multiple components present in the extract. The active ingredients in Phyllanthus niruri that exert anticancer effects may include polyphenols, such as gallic acid, flavanoids or tannins, which are abundant in the herb. However, the detailed mechanism responsible for the anticancer effect of SDEPN extract and identification of the actual functional components require further elucidation.

Our study provides corroborative evidence that SDEPN has selective cytotoxic effects against HT29 and HepG2 cells. Moreover, a synergistic effect was seen when the cells were treated with the extract in combination with cisplatin. This finding supports our hypothesis that combinations of plant extracts and chemotherapeutic agents may allow for a reduction in the dosage of the more toxic chemotherapeutic agent while retaining the therapeutic efficacy and minimizing toxicities. The induction of cell death by SDEPN may increase the sensitivity of HT29 cells to cisplatin-mediated cytotoxicity. Other species of the genus Phyllanthus have demonstrated growth inhibitory activity with a certain degree of selectivity towards the two cancer cell lines tested[20].

The findings of this study support our hypothesis that combinations of plant extracts and chemotherapeutic agents allow for a reduction in the dosage of the latter (i.e., cisplatin), while maintaining therapeutic efficacy. Moreover, the induction of cell death by SDEPN may be a strategy for increasing the sensitivity of HT29 cells to cisplatin-mediated cell death.

Phyllanthus niruri is a widespread tropical plant that is commonly found in coastal areas of Mexico, Argentina, and Brazil. In Brazil, some plant extracts have been distributed to patients by the Public Health Programme since 2010 as an adjunctive therapy for various diseases. The extract from aerial sections of Phyllanthus niruri was included in this list due to the long history of use in traditional medicine for the treatment of kidney and bladder diseases, intestinal infections, diabetes, and hepatitis B. Furthermore, this study has demonstrated an in vitro pro-death potential in cancer cells when Phyllanthus niruri is associated with cisplatin. In vivo studies are still needed to confirm our findings.

Currently, a variety of effective phytochemicals have been tested in cancer treatment, which are used alone or in combination with chemotherapeutic agents for treatment. A spray-dried extract from Phyllanthus niruri (SDEPN) was found to be selectively toxic against two cancer cell lines and induced an increase in cell death of HT29 and HepG2 cells when used in combination with cisplatin. HT29 cells did not undergo cell death when SDEPN was used alone. The mechanism of this effect is currently unknown, but may involve apoptosis, since a major component of SDEPN extract is gallic acid, which has been shown to induce apoptotic pathways.

In this report, the authors have demonstrated that combinations of SDEPN with cisplatin in HT29 and HepG2 cell lines have a more potent effect than either agent alone.

Spray-dried extract of SDEPN appears to be cytotoxic against hepatocellular carcinoma and less toxic against colorectal carcinoma. A combination of SDEPN extract with a chemotherapeutic agent may therefore enhance the efficacy of each component against these cancers. Future in vivo studies will be performed by our group to study the anticancer activity of SDEPN alone and in combination with cisplatin as well as the toxicity against normal tissues.

The manuscript is well written and the findings are interesting to some extent. However, some concerns need to be addressed.