AIM: To investigate the effect of alcohol on the metabolic syndrome (MS) and fatty liver in Japanese men and women.

METHODS: A cross-sectional study was conducted in a medical health checkup program at a general hospital. This study involved 18 571 Japanese men and women, 18-88 years of age, with a mean body mass index of 22.6 kg/m2. A standardized questionnaire was administered. The total amount of alcohol consumed per week was calculated, and categorized into four grades. Fatty liver was examined by ultrasound modified criteria of the revised National Cholesterol Education Program Adult Treatment Panel III and the new International Diabetes Federation.

CONCLUSION: Light to moderate alcohol consumption has a favorable effect for fatty liver, but not for MS in Japanese men and women.

The metabolic syndrome (MS) is defined by abdominal obesity, hypertension, elevated fasting blood glucose, and dyslipidemia[1]. Importantly, MS is a risk factor for the development of type 2 diabetes mellitus and coronary artery disease, and is associated with an increased risk of cerebrovascular disease and all-cause mortality[2]. The favorable effect of alcohol intake enhances insulin sensitivity, increases high-density lipoprotein-cholesterol (HDL-C), and contributes to a lower risk of type 2 diabetes mellitus[3-6] and cardiovascular disease[7-10]. Some reports have shown that the prevalence of MS is associated with alcohol consumption, irrespective of the amount consumed[11-13]. However, several studies have reported beneficial effects of alcohol consumption on MS[14-16]. Moreover, a study in Korean adults has indicated that light alcohol consumption is associated with a reduced prevalence of MS, whereas substantial alcohol intake leads to a dose-dependent increase in the risk of MS[17]. The effect of alcohol on MS in the general population has been inconsistent in the literature.

Fatty liver is closely associated with MS, and is considered the hepatic manifestation of MS[18]. Findings on the relation between alcohol consumption and fatty liver have also been inconsistent in the literature. Although alcohol consumption certainly may be a cause of fatty liver in some cases[19,20], it potentially plays a protective role against fatty deposition in the liver[21-25].

Therefore recent studies have implied the possibility that the effect of alcohol is different between fatty liver and MS, although fatty liver is closely associated with MS. However, the discrepancy of alcohol effect among the previous studies may be due to differences in the following cofactors: ethnicity, age, body mass index (BMI), drug usage, and lifestyle, such as alcohol consumption, smoking, and exercise. However, no large epidemiological study has investigated the effect of alcohol on fatty liver and MS at the same time.

We performed a cross-sectional study of participants of a medical health checkup program, including abdominal ultrasonography. The study was approved by the ethics committee of Murakami Memorial Hospital, Gifu, Japan. The program was conducted in the Medical Health Checkup Center at Murakami Memorial Hospital. The purpose of the medical health checkup program was to promote public health through early detection of chronic diseases and the evaluation of their underlying risk factors. Known as a “human dock”, medical services of this kind are very popular in Japan.

All of the subjects participating in such health checkup programs at Murakami Memorial Hospital between January 2004 and December 2009 were invited to join this study. Participants who tested positive for hepatitis B antigen or hepatitis C antibody and those who reported a history of known liver disease, including viral, genetic, autoimmune, and drug-induced liver disease, were excluded from the study[26]. We invited 22 119 participants in the health checkup program to enroll in the study. Of these, a total of 19 016 Japanese participants (11 295 men and 7721 women) were enrolled after giving informed consent. We excluded 123 participants (92 men and 31 women) with hepatitis C virus, 312 (214 men and 98 women) with hepatitis B virus, and nine (7 men and 2 women) who were diagnosed with other liver diseases. As a result, this study consisted ultimately of 18 571 participants (10 982 men and 7589 women). The mean age was 46.5 years (SD: 9.9; range: 18-88 years), and the mean BMI was 22.6 kg/m2 (SD: 3.3; range: 14.0-58.3 kg/m2).

The health checkup programs that were used for the collection of data included the following tests: eye examinations, urinalysis, blood-cell counts, blood chemistry, electrocardiography, chest radiography, barium examination of the upper gastrointestinal tract, and abdominal ultrasonography. The medical history and lifestyle factors of all participants, including physical activity and habits pertaining to smoking and alcohol consumption, were surveyed by a standardized self-administered questionnaire. When the participants had difficulty completing the questionnaire, trained nurses provided assistance. We undertook blood and urine examinations with MODULAR ANALYTICS (Hitachi High-Technologies Corp. Ltd., Tokyo, Japan).

Because preliminary studies indicated that the number in the excess alcohol consumption group was small (n = 22 and 24), we invited as many subjects as possible. Practically, we collected data for waist circumference from 2004. Then, we set the study period from 2004 to 2009.

The R version 2.4.1 (available from http://www.r-project.org/) was used for statistical analyses. Data was expressed as mean (SD). Two groups of subjects were compared by χ2 test. The significance of differences between non or minimal alcohol consumption and the others was determined by two-tailed, multiple χ2 tests with Bonferroni correction (P < 0.016 for three comparisons in four groups). The linear association of alcohol consumption with several parameters associated with MS was evaluated by Spearman’s rank correlation, and a P value < 0.05 was accepted as significant. We assessed the odds ratio (OR) of the alcohol consumption grade for MS and fatty liver using a multivariate logistic model while controlling for potential covariates. In a multivariate logistic model, we selected age, use of drugs that potentially affect MS, and lifestyle, such as alcohol consumption, regular exercise, and smoking as the potential covariates. The adjusted OR and 95% CIs were calculated. 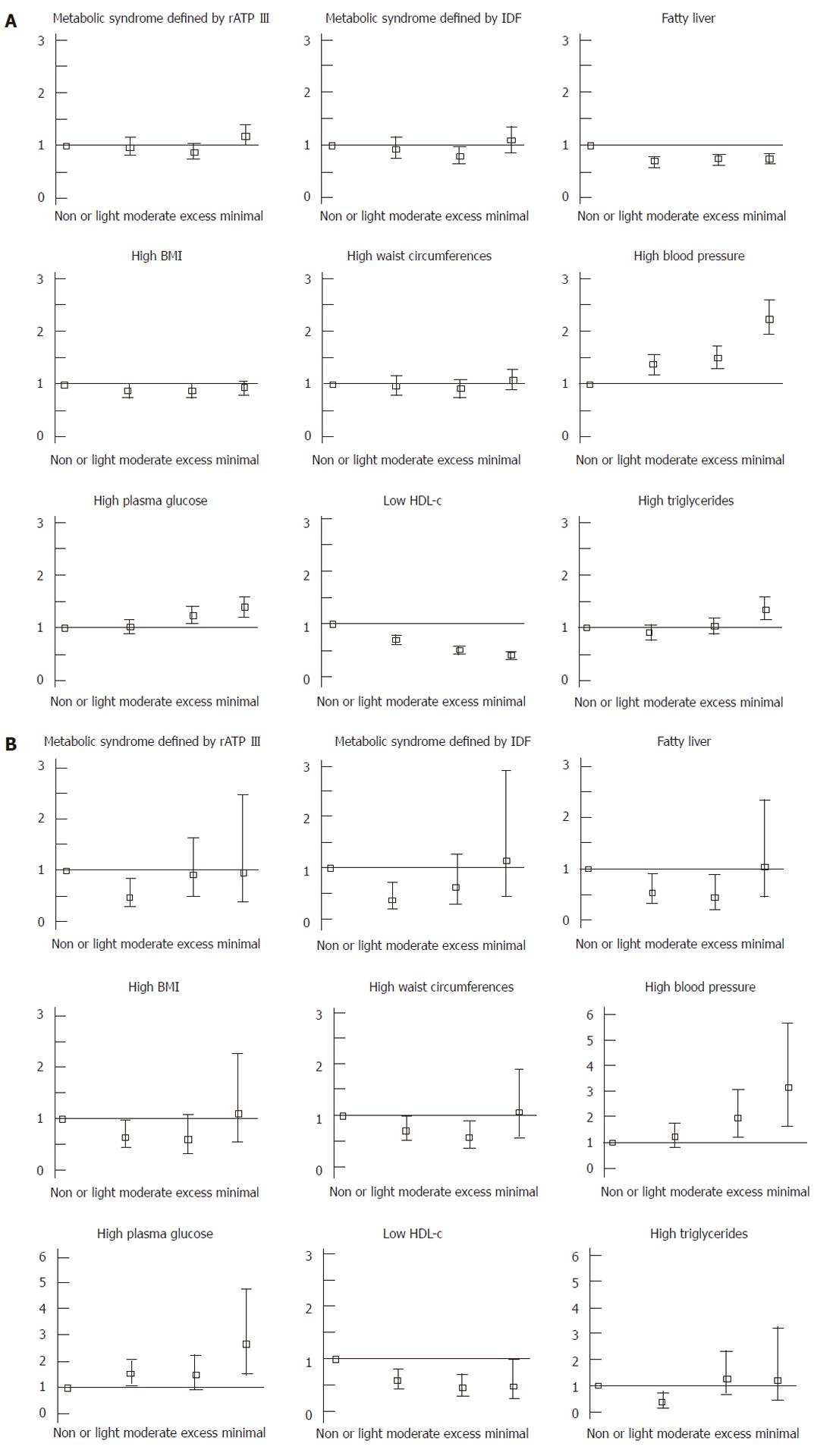 Figure 1 Adjusted odds ratio of the level of alcohol consumption for metabolic syndrome and fatty liver in men (A) and women (B). We assessed the odds ratio (OR) of the level of alcohol consumption for metabolic syndrome (MS) and fatty liver using a multivariate logistic model while controlling for potential covariates. In a multivariate logistic model, we selected age, usage of drugs that potentially affected MS, and lifestyle factors such as wine consumption, regular exercise, and smoking status, as the potential covariates. Bars mean the adjusted OR and 95% CIs. HDL-c: High-density lipoprotein-cholesterol; rATP III: Revised National Cholesterol Education Program Adult Treatment Panel III; IDF: International Diabetes Federation; BMI: Body mass index.

Previous studies have indicated that the presence of fatty liver is a strong predictor of MS[36], and fatty liver correlates with all the components of MS[37]. Among populations with no or light alcohol consumption, liver fat content in participants with MS is significantly increased up to fourfold higher than those without MS[37], and the incidence of fatty liver has been shown to be increased fourfold in men and 11-fold in women with MS[27]. Although fatty liver is considered to be a hepatic manifestation of MS, more than half of Japanese men and women with fatty liver were not diagnosed with MS.

Findings on the relation between alcohol consumption and fatty liver have also been inconsistent[19-25]. Fat deposition in the liver has been shown to be primarily due to an increased influx of fatty acids to the liver; most likely as a result of the increased lipolysis associated with obesity and insulin resistance, and as a result of increased hepatic de novo lipogenesis[50]. Reduced fatty acid oxidation and mitochondrial dysfunction and decreased export of fat further contribute to the accumulation of liver fat[51,52]. Alcohol-dehydrogenase-mediated ethanol metabolism generates a reduced form of nicotinamide adenine dinucleotide, which promotes steatosis by stimulating the synthesis of fatty acids and opposing their oxidation[53]. The hepatic lipogenic pathway is activated after the consumption of 24 g/d ethanol[53]. Sterol regulatory element binding protein 1c (SREBP1c)[54] and peroxisome proliferator activated receptor (PPAR)α[55], are altered with alcohol consumption. The involvement of AMP-activated protein kinase activity in the action of ethanol on the liver has been demonstrated in experimental models of ethanol-induced steatosis[56].

Thus, several pivotal factors in the pathogenesis of fatty liver may be common in both alcoholic and non-alcoholic subjects. Therefore, the possible mechanism by which alcohol has a protective effect against fatty deposition in the liver remains unclear. Our study also provides clear evidence that light to moderate alcohol consumption has a favorable effect on fatty liver.

Some limitations of our study should be noted. First, although ultrasonography has been validated for detecting fatty liver, it may give an incorrect diagnosis compared to liver biopsy[30]. Second, self-reported information regarding alcohol intake is frequently subject to underreporting, and misreporting could be a source of bias. However, the self-reported information regarding alcohol intake in our study was validated previously[27]. Third, the generalizability of our study to non-Japanese populations is uncertain.

We thank all of the staff members in the medical health checkup center at Murakami Memorial Hospital. The authors declare no conflict of interest associated with the manuscript.

The effects of alcohol on the metabolic syndrome (MS) have been inconsistent in previous studies. Fatty liver is closely associated with MS, and is considered to be the hepatic manifestation of MS. Findings on the relation between alcohol consumption and fatty liver have also been inconsistent.

The favorable effect of alcohol intake enhances insulin sensitivity, and increases high-density lipoprotein-cholesterol, which contributes to a lower risk of type 2 diabetes mellitus, and cardiovascular disease. Moreover, alcohol consumption plays a protective role against fatty deposition in the liver, although alcohol consumption certainly could be a cause of fatty liver in some cases.

The strengths of the study include its large sample size and validated questionnaire.