AIM: To assess B1a cell expression in the rectal mucosa of ulcerative colitis (UC) patients in comparison with healthy controls.

METHODS: Rectal mucosa biopsies were collected from 15 UC patients and 17 healthy controls. CD5+ B cells were analysed by three colour flow cytometry from rectal mucosal samples after mechanical disaggregation by Medimachine®. Immunohistochemical analysis of B and T lymphocytes was also performed. Correlations between, on the one hand, rectal B1a cell concentrations and, on the other, erythrocyte sedimentation rate and C-reactive protein levels and clinical, endoscopic and histological disease activity indices were evaluated.

CONCLUSION: B1a lymphocytes seem to be involved in the pathogenesis of UC, however, the role they play in its early phases and in disease activity, have yet to be defined.

The aetiology of ulcerative colitis (UC) is still unknown, but several studies have demonstrated that there is an abnormal immunologic response to gut antigens[1,2]. One of the mechanisms which protects the body against intestinal luminal antigens before a specific aggressive inflammatory response is unleashed, is the production of natural antibodies, in particular immunoglobulin A (IgA)[3,4]. A large proportion of IgA is produced in a T-independent way by B cells and in particular, according to several studies, by the B1 sub-population. The majority of B1 cells, also called B1a, express CD5 on their surface. In a previous study[5] we reported that B1a cell (CD5+CD19+) blood concentrations were reduced in UC patients with respect to those in healthy controls, and that the B1a cell rate was inversely correlated with erythrocyte sedimentation rate (ESR) and C-reactive protein (CRP) levels in UC patients. The aim of the present study was to analyse the rate and concentration of B1a cells in the rectal mucosa of UC patients, to compare these values with those found in healthy controls, and to assess any possible correlation with disease activity.

The study population consisted of 15 UC patients and 17 healthy controls. The study protocol was drafted in accordance with the Declaration of Helsinki and all of the patients and controls who participated signed informed consent statements. Patients taking immunosuppressive drugs or corticosteroids were excluded from the study.

The disease activity of the UC patients, undergoing ordinary follow-up colonoscopy, was classified in accordance with the Seo clinical score[6], the modified endoscopic Baron classification[7] and Geboes’ histological scoring[8]. Subjects who underwent colonoscopy as a cancer screening procedure and whose result was negative, were enrolled as healthy controls.

A cellular suspension, obtained by fragmentizing 4 rectal biopsies from each patient using a Medimachine (Consul TS, Rivalta di Torino, Italy), was used for flow cytometry. The method utilized was as follows: the collected rectal biopsies were placed in physiologic solution (Na 0.9%) and immediately processed. The biopsies were first washed twice with physiologic solution for 2 min each wash. Each biopsy was minced into < 1 mm3 pieces which were placed in a sterile microblade-equipped polyethylene chamber (Medicons, BD Biosciences, San Jose, CA, United States) with 1 mL phosphate buffered saline (PBS) 0.01 mol/L. The Medicons contain an immobile stainless steel screen with 100 hexagonal holes, each surrounded by six microblades. When the Medicons are inserted into the Medimachine the tissue comes into contact with the blades by means of a rotating element and is disaggregated. A micropump positioned under the screen forces the liquid to pass through the bore-holes, ensuring that the bore-holes remain clean. Medicons with 35 μm separator screens were used.

Fragments were dissociated 4 times for 20 s at a constant speed of 100 r/min. The suspension was filtered using filters with 30 μm diameter holes (Flicons, BD Bioscences, San Jose, CA, United States) and then analysed by flow-cytometry (Figures 1 and 2). 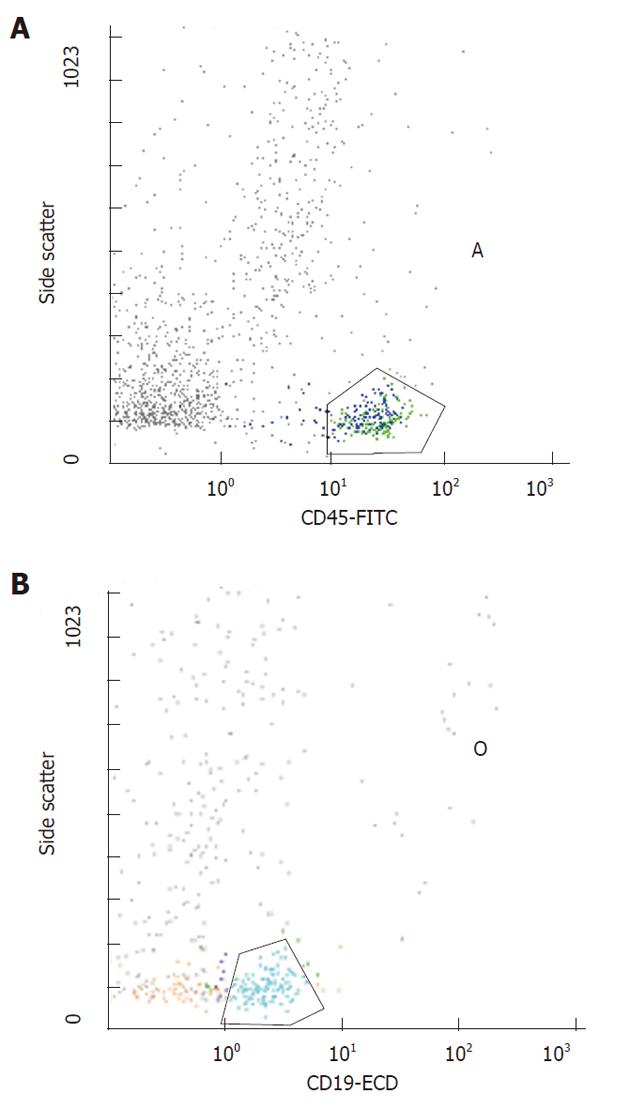 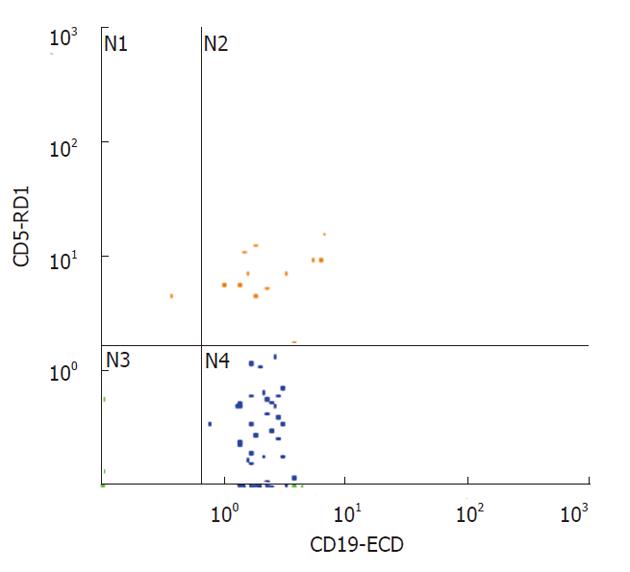 All mAbs were used at optimal saturating concentrations as recommended by the manufacturers. The cells were washed in a FACS buffer containing PBS/5% FCS/0.05% and sodium azide, then incubated with 10 mg of human IgG (Sigma Chemical Co., St. Louis, MO, United States) for 30 min at 4 °C-8 °C to block Fc receptors. Cells were washed to remove excess IgG and were triple-stained with either RD-1-conjugated mAb against CD5, or RD-1-control IgG mAb, ECD-conjugated mAb against CD19 or ECD-control IgG mAb and FITC-conjugated mAb against CD45 or FITC-control IgG mAb for 30 min at 4 °C-8 °C. Cells were washed twice, re-suspended in a FACS buffer and fixed with 1% paraformaldehyde. At that point, 2 mL of lysing solution (0.17 mol/L NH4Cl) were added and following 15 min of incubation, samples were analyzed by flow cytometry using a Coulter EPICS XL-MCL (Beckman Coulter Inc). Mononuclear cells were gated depending on their CD45 expression characteristics. Different subsets of cells (CD19) were then gated on the basis of fluorescence 1 and fluorescence 2 staining. An immunologic gate was performed on CD19+ cells to uncover CD5. Isotypic controls were used for all the samples. A two-colour flow cytometric analysis was similarly performed to study the T cells using anti-CD45 FITC mAb (Isotype IgG1, mouse, clone J.33, Beckman Coulter Inc.) and anti-CD3 Phycoerythrin-Cyanin 5 (Pc5) mAb (Isotype IgG1, mouse, clone UCHT 1, Beckman Coulter Inc.).

Two rectal biopsies from each patient studied underwent immunohistochemical analysis. Samples were fixed in 10% neutral buffered formalin, processed for embedding in paraffin wax, and cut into 5 μm-thick sections. Sections were dewaxed and rehydrated by routine protocols. For anti-CD3 immunohistochemistry, antigen unmasking was performed with 10 mmol/L sodium citrate buffer, pH 6.0, in a microwave oven at 96 °C for 30 min. Antigen unmasking was not necessary for anti-CD20 analysis. Sections were incubated in 0.3% hydrogen peroxide for 10 min at room temperature to remove endogenous peroxidase activity, and then in blocking serum for 30 min. Samples were incubated with primary antibodies at room temperature for 45 min. The primary antibodies used were: anti-CD3 (Polyclonal rabbit anti-Human, Dako, Milan, Italy) and anti-CD20 (Monoclonal mouse anti-human CD20cy, Dako) diluted 1:50 and 1:200, respectively. Sections were then washed three times in PBS for 5 min each wash, treated with secondary antibody (Envision System HRP, Dako) for 30 min at room temperature and developed in 3,3’-diaminobenzidine (DAB, Sigma-Aldrich, Milan, Italy). Finally, the sections were counterstained with hematoxylin.

ESR and CRP were measured using the Westergren method and immuno-nephelometry, respectively.

Results are expressed as mean ± SE. Statistical analysis was performed using Mann-Whitney U test for the comparison between the UC patients and controls and by Spearman’s Rank test for correlations. Statistical significance was set at P < 0.05. 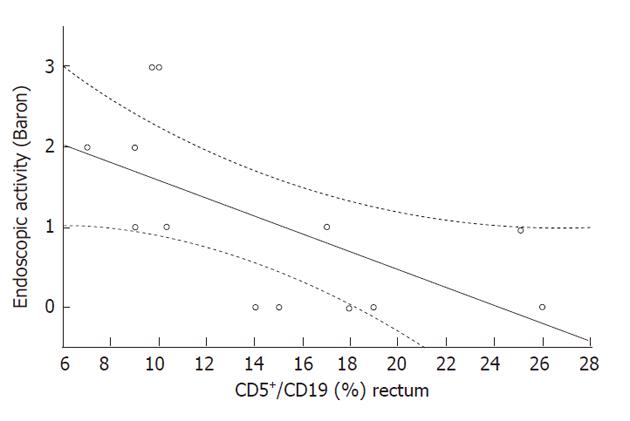 More than 80% of the body’s activated B cells are located in the gut, where a continuous interaction takes place between the immune system and the trillion bacteria that reside there[9].

IgA generation by B cells is an important mechanism that regulates this homeostasis, contributing to immune protection but without provoking inflammation. A large proportion of the intestinal IgA against cell wall antigens and proteins of commensal bacteria is specifically induced in response to their presence within the microflora, but is independent of T cells or germinal centre formation. This T cell-independent IgA production is derived from B1 lymphocytes which develop in the peritoneal compartment and are distributed diffusely in the intestinal lamina propria[10]. In mice, peritoneal B cells (B1 cells) do not differentiate during migration through the lymphoid organs and finally home to the gut lamina propria where they switch and differentiate to IgA+ plasma cells[11]. The physiological importance of B1 cells in the maintenance of homeostasis at the mucosal surface has been clearly demonstrated[12].

B cells in inflammatory bowel disease have not been as extensively studied as T cells[13], and data on the role of B1 cells in UC are particularly scanty. Except for a smaller sub-group called B1b, B1 cells are distinguishable from B2 cells by expressing CD5 on their surface[14]. Even in the absence of external antigen stimulation, B1 cells produce natural antibodies (Ab) that provide early, broad protection against pathogens[4]. B1 cells are also known to produce auto-reactive Ab, including Ab to cell membrane components, such as phosphorylcholine[15] and phosphatidylcholine[16] to immunoglobulins (rheumatoid factor) and to single-stranded DNA[17].

B1 cells were thus analysed for their role in auto-immunity and high circulating B1a lymphocyte levels have been reported in some autoimmune diseases, such as systemic lupus erythematosus, primary Sjogren’s syndrome[18], rheumatoid arthritis[19], multiple sclerosis[20] and anti-phospholipid syndrome[21]. In the light of recent findings, these cells, and in particular the CD5 molecule on B cells, seem to play a role in preventing autoimmunity[22].

In a previous study we reported that B1a cell (CD5+/CD19+) concentrations are reduced in the blood of patients with UC even after restorative proctocolectomy[5]. Moreover, B1a cell rate was found to be inversely correlated with ESR and CRP levels in UC patients, indicating that these cells play a protective role against inflammation. Low CD5+/CD19+ blood percentages in UC and in Crohn’s disease (CD) have also been reported by other authors[23,24].

Finding an increased concentration of B1a cells, but not a higher percentage within the whole B lymphocyte population, means that other B lymphocyte subsets were increased in the rectal mucosa of these patients. In addition, finding an inverse correlation between CD5+ B cells and endoscopic disease activity suggests that these cells are recruited to a relatively lower extent when the disease is more severe and possibly, at that point, a more specific immune reaction has already begun. As our findings seem to indicate that there is a loss of tolerance at this disease stage, further studies will clarify this point. The finding of an inverse correlation between rectal mucosa B1a cell rate and endoscopic disease activity is consistent with previous data concerning the inverse correlation of circulating B1a cell rate and blood ESR and CRP levels[5]. The former is a sign of local events, and the latter of a systemic imbalance.

Peterson et al[26] reported that the depletion of CD5+ B1 cells has different effects on the induction phase with respect to the effector phase of experimental autoimmune encephalomyelitis. During the induction phase it increases disease incidence, while in the effector phase it reduces disease severity. The role of CD5+ B cells in UC is not yet clear. It remains to be clarified if they play a protective role by producing polyspecific immunoglobulins, an unleashing role by producing autoreactive Ab, or if there is an even more complex modulating role that differs depending on the disease activity. The findings in this and other studies seem to indicate that their role in UC is not marginal, but more in-depth analyses are warranted to better define their function and to determine if and how their modulation has an impact on disease activity.

The authors are grateful to Linda Inverso Moretti for her assistance in editing the English version of this manuscript.

The aetiology of ulcerative colitis (UC) is still unknown, but several studies have demonstrated that there is an abnormal immunologic response to gut antigens.

B1 lymphocytes are important in maintaining mucosal surfaces in a state of homeostasis, and it has been found that B1 cell concentrations are reduced in the blood of patients with UC even after restorative proctocolectomy. In the present study, B1a cell expression was assessed in the rectal mucosa of UC patients and compared with that in healthy controls using three color flow-cytometry.

The findings in this and other studies seem to indicate that B1a lymphocytes play a role in the pathogenesis of ulcerative colitis and their modulation could have an impact on the control of disease activity.

B1 lymphocytes are distinguishable from B2 lymphocytes because they express CD5 on their surface. Even in the absence of external antigen stimulation, B1 cells produce natural antibodies that provide early, broad protection against pathogens. B1 cells are also known to produce auto-reactive antibodies. CD5 is a 67 kD trans-membrane glycoprotein that interacts in the B lymphocyte with the B cell receptor, negatively regulating growth signaling.