Autoimmune pancreatitis (AIP) represents a chronic disease of the pancreas with a presumed autoimmune etiology. There are characteristic serologic, morphologic, clinical and pathologic features, specifically, lymphoplasmacytic infiltration with parenchymal fibrosis. Some patients develop comorbid involvement of the biliary tract characterized by steroid responsive stricturing, a condition that has been termed IgG4-associated cholangitis (IAC). Steroid therapy is the first-line and mainstay treatment for AIP but relapse is frequent on steroid withdrawal. Azathioprine has been used for patients who fail steroid tapering, but is not tolerated by some patients and may be contraindicated in patients with deficient thiopurine methyltransferase (TPMT) activity. The use of mycophenolate mofetil as a possible treatment alternative for autoimmune pancreatitis with IAC has been described once in the pediatric population[1] and has been mentioned in discussions of AIP[2,3]. However, there have been no case reports to date in an adult population. We describe a 65-year-old man with a history of AIP and IAC who failed multiple attempts at steroid tapering and was intolerant of azathioprine. This is the first case report of the use of mycophenolate mofetil in an adult patient with IgG4-mediated AIP and IAC.

A 65-year-old Caucasian male presented to another medical center for a routine colonoscopy. A chest radiograph obtained prior to the procedure revealed multiple nodules in the lower lung fields with pleural scarring and a small pleural effusion. A subsequent computed tomography (CT) scan of the chest revealed multiple pulmonary nodules in the right lower lobe, right lateral middle lobe, and left middle lobe, as well as intrathoracic lymphadenopathy. Because of concerns of malignancy, bronchoalveolar lavage was performed, which revealed infection with Aspergillosis fumigatus. The patient began treatment with micofungin.

At the time of bronchoscopy, the patient was also noted to be jaundiced. Laboratory findings revealed an elevated serum total bilirubin level of 4.8 mg/dL and an elevated conjugated bilirubin level of 4 mg/dL. Serum lipase was 16 U/L and serum amylase was 40 U/L, both within normal limits. CT scan of the abdomen revealed diffuse enlargement of the pancreas, evidence of cholelithiasis, as well as biliary ductal dilatation. An upper endoscopic ultrasound with fine-needle aspiration of the pancreas revealed ductal epithelium with fibrosis, inflammatory cells, and debris and no evidence of malignancy, suggestive of autoimmune pancreatitis. Endoscopic retrograde cholangiopancreatography (ERCP) revealed a stricture in the intra-pancreatic portion of the main bile duct, for which the patient underwent stent placement. Biliary ductal brushings revealed no malignant cells. The serum IgG4 level was elevated at 213 mg/dL. Treatment with a tapering course of prednisone for 6 weeks was initiated, with significant improvement in symptoms, reduction in the size of the pancreas on cross sectional imaging, and normalization of the liver enzymes.

After 3 mo, the patient presented to the same hospital emergency department with a relapse of jaundice, steatorrhea, and chills. The total bilirubin was 6 mg/dL, direct bilirubin was 5.2 mg/dL, aspartate aminotransferase (AST) was 122 U/L, alkaline phosphatase (ALP) was 557 U/L, and lactate dehydrogenase was 369 mg/dL. Ultrasound of the gallbladder showed development of mild intrahepatic biliary dilatation, possibly representing stent malfunction. CT of the abdomen revealed significant interval increase in the size of the pancreas. ERCP was performed with exchange of the common bile duct stent. Cholangiography revealed diffuse irregular stricturing of the common bile duct to the hilum of the liver. The patient was restarted on prednisone 40 mg daily. There was symptomatic and clinical improvement.

The patient was referred to our medical center to receive care closer to his home. He was taking 30 mg prednisone daily on presentation and reported feeling well. The biliary stent was extracted. His serum IgG4 level was elevated at 120 mg/dL. The other autoimmune work-up was negative: Anti-nuclear antibody IgG was not detected, Anti-neutrophil cytoplasmic antibody IgG was less than 1:20, f-actin antibody IgG was 15 units (negative), anti-mitochondrial M2 antibody IgG was 0.9 units (negative), and liver kidney microsomal antibody IgG was less than 1:20 (negative). Two months later, the patient presented once again with recurrent jaundice, fatigue, and discomfort. By this time, he had been tapered to a dose of 15 mg prednisone daily and had completed micafungin treatment for his pulmonary aspergillosis. Magnetic resonance imaging (MRI) of the abdomen with and without gadolinium revealed a diminished T1 signal and abnormal delayed enhancement in the pancreas. There was no pancreatic ductal dilatation, and the overall morphology was normal to mildly enlarged. The T2 signal was mildly elevated in the pancreatic parenchyma. The impression was of changes consistent with autoimmune pancreatitis. The MRI also revealed diffuse intrahepatic biliary ductal dilatation and intrahepatic ductal stenosis as well as periportal arterial blush enhancement and delayed uptake of contrast, consistent with active cholangitis. ERCP showed a single severe 18 mm stricture in the distal common bile duct with irregular stricturing of the bilateral intrahepatic ducts (Figure 1). A stent was placed in the bile duct. Biopsy of the pancreatic ampulla demonstrated chronic active inflammation with approximately 20-25 IgG4-containing plasma cells/high power field, consistent with the clinical impression of autoimmune pancreatitis (Figure 2). The patient was maintained on 15 mg prednisone and was started on 50 mg azathioprine daily in an attempt to transition to a steroid-sparing immunosuppressive regimen. However, he was unable to tolerate azathioprine due to debilitating nausea, fatigue, lethargy and diarrhea despite dose reduction, evening administration, and concurrent antiemetic therapy. 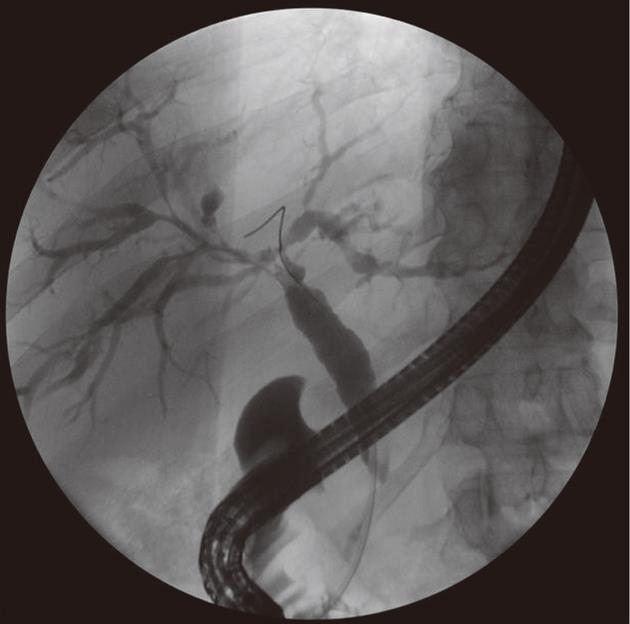 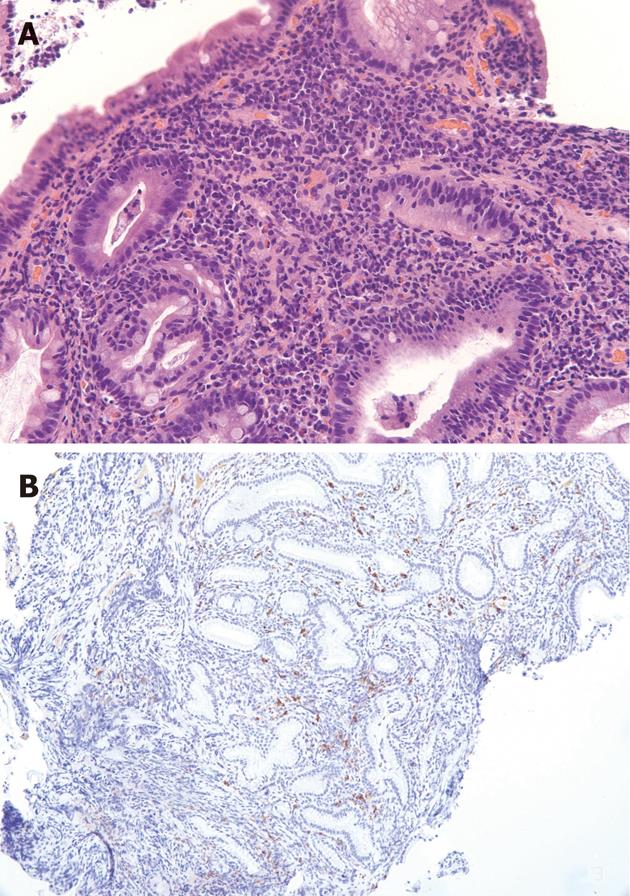 Over the next 6 mo, the patient underwent 2 additional biliary stent exchanges at 3-mo intervals. Brush specimens obtained from the common bile duct stricture were negative for malignant cells by cytology and fluorescence in situ hybridization analysis. The patient was maintained on 15 mg prednisone daily. Mycophenolate mofetil was discussed as an alternative immunomodulatory treatment and an alternative to long-term prednisone. The patient was initiated on mycophenolate mofetil at a dose of 750 mg twice daily.

The patient tolerated the mycophenolate mofetil without side effects. At this point, he was being maintained on mycophenolate mofetil and prednisone. After 3 mo on mycophenolate mofetil and prednisone, he had no jaundice or steatorrhea. His hyperglycemia was mild and his diabetes medications were being tapered, likely a result of the lower dose of prednisone required. He required 3 half-tablets of glipizide 5 mg per month to maintain normal serum glucose values. The serum AST level was 30 U/L, ALP level was 101 U/L, total bilirubin level was 0.7 mg/dL, albumin was 3.4 mg/dL, amylase was 43 U/L and lipase was 16 U/L. At the time of his last scheduled stent exchange, the stent had passed spontaneously and no procedure was performed. However, over this 3-mo period, he had several self-limited episodes of fatigue, malaise, and pruritus lasting 24 to 48 h, associated with transient elevations in his liver enzymes. He remained without a biliary stent and felt well overall. Given this course, the mycophenolate mofetil dosage was increased to 1000 mg twice daily and a steroid taper was again resumed, decreasing the dose by 1 mg per week from an initial dose of 15 mg prednisone daily. When the patient reached 10 mg prednisone daily, he experienced a recurrence of nausea and abdominal pain, as well as darkened urine. His total bilirubin was elevated to 9.5 mg/dL, AST 146 IU/L, and ALT 266 IU/L. His prednisone dosage was increased back to 15 mg per day and his symptoms again resolved. He is presently maintained on 15 mg prednisone per day and the mycophenolate mofetil is being tapered due to an inability to stop systemic corticosteroids. He is able to continue an active lifestyle working 12-14 h days on his farm. He is being considered for alternative immunomodulatory therapy.

Systemic corticosteroid therapy is the standard treatment for AIP with IAC[3]. AIP and IAC likely represent organ-specific manifestations of a broader systemic disease described as IgG4-related sclerosing disease. The disease process involves deposition of IgG4 antibodies into various tissues, causing fibrosis and organ dysfunction. Other proposed manifestations of IgG4-associated disease include Sjögren’s syndrome, primary sclerosing cholangitis, and retroperitoneal fibrosis[4]. There is a strong association between AIP and IAC, as was seen in our patient[5].

Although the response to corticosteroids is a defining feature of AIP, representing one of the 5 diagnostic criteria (histology, imaging, serology, other organ involvement and response to therapy) for the disease[6], relapse of biliary strictures after steroid withdrawal in cases of IAC is not uncommon. In one recent study of 53 patients with IAC, 54% of patients experienced relapse after steroid withdrawal[3]. In such cases, alternative treatment with immunomodulating medications such as azathioprine and 6-mercaptopurine has been proposed to avoid long-term steroid use and its associated consequences[3]. However, azathioprine and 6-mercaptopurine are not tolerated by all patients. In addition, reduced TPMT activity may be found in approximately 11% of the population, and undetectable enzyme activity in 0.3% of the population[7]. Patients with insufficient TMPT activity may develop bone marrow toxicity and myelosuppression[8]. In addition, while azathioprine and 6-mercaptopurine may be tolerated, not all patients started on these medications will be able to taper their steroid therapy. For these reasons, alternatives are being examined. For example, a patient refractory to steroid taper and 6-mercaptopurine was successfully managed with rituximab, experiencing cholangiographic improvement, normalization of liver enzymes, and resolution of extrapancreatic manifestations of IgG4 disease[2]. However, rituximab requires infusional therapy, is not indicated for AIP, and has a high cost, which limits its use in this setting.

In the case described herein, the steroid taper was not successful with the use of mycophenolate mofetil and the patient had recurrence of symptoms, jaundice and elevated liver enzymes; however, the medication may be efficacious in a subset of patients with refractory disease, and we believe that this merits further investigation in larger studies.