Percutaneous liver biopsy is the gold standard for the diagnosis of NASH[3]. However, histopathologic investigation has some limitations because of its invasiveness and high costs, especially in children; moreover, the histopathologic findings of NAFLD in children are somewhat different from those in adults, revealing portal inflammation and portal fibrosis mainly in pediatric NASH in contrast to lobular inflammation, perisinusoidal fibrosis, ballooning, and Mallory’s hyaline in adult NASH[4,5].

A total of 77 obese children with NAFLD under the age of 18 years who visited the Pediatric Obesity Clinic were included and divided into 2 subgroups according to the grading and staging of NAFLD. Obesity was defined as a body mass index (BMI) value higher than the 95th percentile for the child’s age and sex, and overweight as a BMI between the 85th and 95th percentiles. NAFLD was diagnosed on the basis of histopathologic findings compatible with NAFLD on liver biopsy[13]. This study was approved by the Institutional Review Board of the Seoul National University Bundang Hospital.

Percutaneous needle liver biopsy was performed in all patients. Histopathologic grades of steatosis, lobular and portal inflammation, and hepatocyte ballooning and the histopathologic stages of fibrosis were evaluated in each patient to diagnose NAFLD and to assess the stages of hepatic fibrosis[16]. The histological scoring system of Kleiner et al[13] was also applied to the liver biopsy specimens to assess the histologic stages of hepatic fibrosis and the NAFLD activity score (NAS). Fibrosis was staged as follows: stage 0: none; stage 1: perisinusoidal or periportal fibrosis (stage 1a: mild perisinusoidal; stage 1b: moderate perisinusoidal; stage 1c: portal/periportal; stage 2: perisinusoidal and portal/periportal fibrosis; stage 3: bridging fibrosis; stage 4: cirrhosis)[14].

Receiver operating characteristic (ROC) curves and the area under the ROC curve (AUROC) were applied to assess and compare the diagnostic accuracy of each noninvasive hepatic fibrosis scores.

Clinical data of the patients and the results of laboratory tests for obesity and obesity-related complications are listed in Table 1. None of these noninvasive clinical and biochemical parameters exhibited a significant difference between the 2 fibrosis groups based on histopathologic findings (Table 1).

The result of multivariate logistic regression analysis for clinical or biochemical factors to predict significant hepatic fibrosis in children with NAFLD is shown in Table 3.

Comparison of the diagnostic accuracy of the hepatic fibrosis scoring systems

ROC curves of the hepatic fibrosis scoring systems are shown in Figure 1. 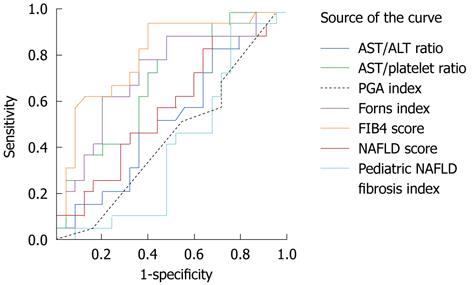 Due to the invasiveness of histopathologic diagnosis based on liver biopsy, noninvasive methods including the measurement of various clinical parameters or laboratory markers have been applied to clinical practice and research, mostly in adults, to facilitate the diagnosis of NAFLD and to predict hepatic fibrosis in obese patients.

To this point, a number of noninvasive hepatic fibrosis scores have been developed and applied to chronic liver diseases, such as hepatitis B, hepatitis C, alcoholic fatty liver disease, and NAFLD[22,23]. These scores include indices based on indirect biochemical markers and/or clinical parameters developed for adults, such as the AST/ALT ratio[10], APRI[17], PGA index[18], Forns index[19], FIB-4[20], and NAFLD fibrosis score[21]. These scores have been validated in a number of previously published studies in adults[22], but no validation studies have been performed in children with NAFLD, excluding the AST/ALT ratio, which did not differentiate hepatic fibrosis from no fibrosis in children[10].

FIB4, comprising age in addition to AST, ALT, and platelet counts, also differentiated significant hepatic fibrosis from mild fibrosis in our study, with the highest AUROC of 0.81. In previous studies on FIB4 in adult patients with NAFLD, the AUROCs of FIB4 were 0.802 and 0.86, respectively, which were higher than those of the AST/ALT ratio, APRI, NAFLD fibrosis score, and the BMI, AST/ALT ratio, diabetes score in both studies[26,27]. FIB4 was significant in distinguishing advanced fibrosis (stage 3 to 4) from mild fibrosis (stage 0 to 2) in these 2 studies[26,27]. These results were similar to those of our study, indicating that FIB4 had the highest AUROC among a variety of hepatic fibrosis scores using standard laboratory tests. Thus, FIB4 also appears to be a desirable noninvasive hepatic fibrosis score, even in children, with the application of age-appropriate cutoffs.

Because histopathologic findings of pediatric NASH are to some extent distinct from adult NASH[4,5], the application of noninvasive hepatic fibrosis scores to children with NAFLD should be considered from a different point of view. More validation studies may be required in the future to apply noninvasive hepatic fibrosis scoring systems to clinical fields in pediatric population.

Although liver biopsy is the gold standard for the diagnosis of nonalcoholic fatty liver disease (NAFLD), it has some limitations in children because of its invasiveness and high costs, and moreover, the histopathologic findings of pediatric nonalcoholic steatohepatitis (NASH) are somewhat different from adult NASH. Thus, noninvasive methods to predict hepatic fibrosis are required in children suspicious of NAFLD.

The study may represent a future diagnostics for NAFLD in pediatric population, suggesting APRI and FIB4 as noninvasive tools to evaluate hepatic fibrosis in children possibly instead of invasive liver biopsy.

In this study, authors investigate several non-invasive scores for liver fibrosis in children with established and histology-proven NAFLD. This study is of interest, as today only view reports about the diagnostic accuracy of these scores in children are available.