Esophageal duplication cysts are rare inherited lesions usually diagnosed in early childhood. Most of them are found in the mediastinum and manifest themselves as separate masses along or in continuity with the native esophagus. Their prevalence remains unknown and they are treated either surgically or endoscopically. In this report we describe a series of four adult patients in whom esophageal duplication cysts were localised intramurally as masses pressing on the esophageal lumen and who were diagnosed with endoscopic ultrasonography. All patients were initially referred to other centres for upper gastroduodenoscopy due to non-specific dyspeptic symptoms. After finding suspicious lesions in the esophagus their endoscopists referred them for endoscopic ultrasound examination at our centre. In two of the cases lesions mimicked esophageal varices and the other two submucosal tumours. In all four patients endoscopic ultrasonography has shown esophageal duplication cysts. Patients had no symptoms suggesting disease of the esophagus and required no treatment. As the true prevalence of esophageal cysts is unknown, it is very likely that in many patients, like in these four described by us, they may cause no symptoms, remain undetected and require no intervention. Increasing availability of new diagnostic modalities such as endoscopic ultrasonography may change the current view regarding the prevalence of esophageal duplication cysts and prove that they may, in fact, not be such rare findings.

Esophageal cysts are considered rare, usually described in single case reports, and their true prevalence remains unknown[2]. Up to 80% of cases are diagnosed during childhood[1-5]. Most of them are found in the mediastinum and manifest themselves as separate masses along or in continuity with the native esophagus. Intramural esophageal cysts are considered very uncommon in adults[6,7].

Symptoms are caused by compression or displacement of surrounding mediastinal structures and comprise dysphagia, respiratory distress, failure to thrive and retrosternal pain[7,8]. Malignant progression is considered extremely rare[9]. Diagnosis is usually made by computed tomography scan or endoscopic ultrasonography (EUS).

Treatment of symptomatic esophageal cysts can be either surgical or endoscopic. Surgical resection of the cyst is usually carried out in childhood or in adults, in cases of lesions impossible to treat endoscopically. Surgical treatment is currently moving from thoracotomy to less-invasive procedures, such as video-assisted thoracoscopic surgery[7] and to endoscopic treatments which, however, still remain challenging interventions[10].

We present a series of 4 patients with esophageal cysts which caused no symptoms and required no intervention.

All patients were initially referred to other centres for upper gastroduodenoscopy due to non-specific, dyspeptic symptoms. They gave no history of dysphagia. After finding suspicious lesions in the esophagus their endoscopists referred them for EUS examination. Written informed consent was obtained from each patient.

A 60-year old female: On endoscopy, multiple impressions, covered with normal mucosa and localized to the middle and lower third of the esophagus were seen (Figure 1A). They could be easily passed by the endoscope. No other abnormality was found on endoscopy. On EUS multiple cystic fluid-filled intramural lesions were detected (Figure 1B). They were avascular on Doppler study and their size varied from 3 mm × 5 mm to 11 mm × 25 mm. 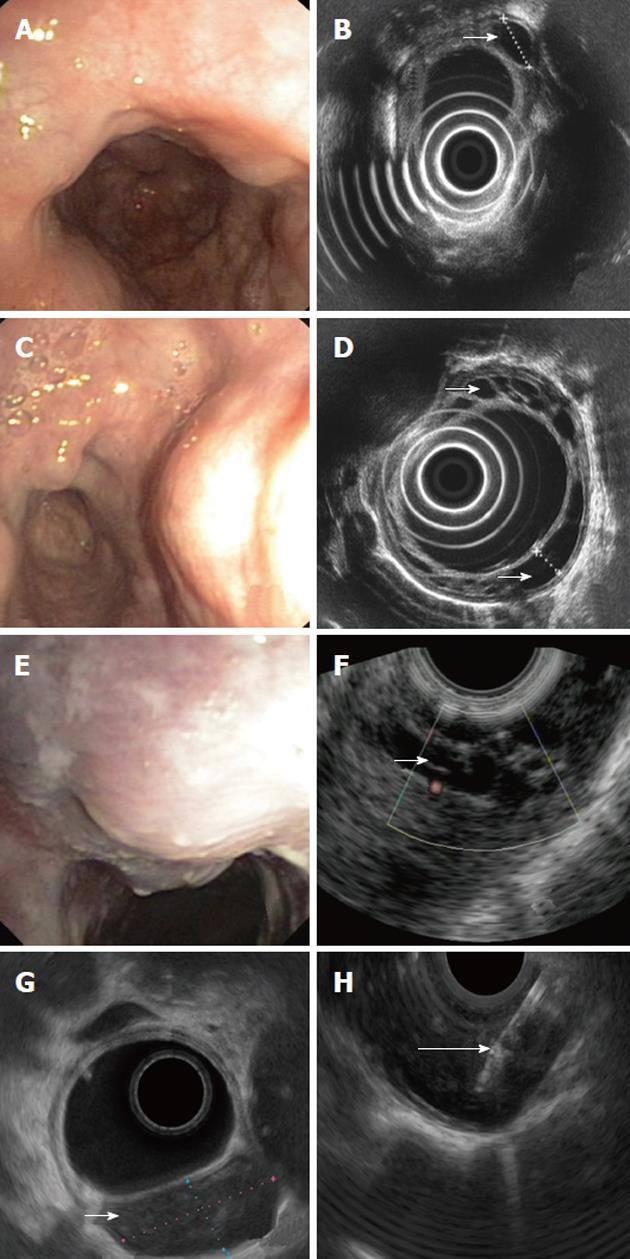 In this paper we describe a series of 4 patients who were referred to our centre for further investigation of esophageal lesions found on routine gastroduodenoscopy. In two cases, where there were multiple lesions, referring doctors suspected unusual looking varices or vascular lesions. In view of our interest in EUS of portal hypertension[11-13] a more detailed study of both the lesions and intrinsic para- and peri-esophageal circulation was performed. However, these patients had no clinical, laboratory or imaging features suggesting liver cirrhosis or portal hypertension. In the other two cases the initial diagnosis was submucosal tumours. These findings were expected to be confirmed using EUS. All these patients turned out to have esophageal duplication cysts.

Esophageal cysts do not usually communicate with the esophageal wall but occur as a separate malformation along or in continuity with the native esophagus. In the presented cases they were localized intramurally as a mass pressing on the esophageal lumen and this is why they resembled esophageal varices or submucosal tumours.

Treatment of esophageal duplication cysts in asymptomatic patients is controversial with no clear clinical guidelines. As all our patients remained asymptomatic we arbitrarily decided to schedule them for follow up EUS/gastroduodenoscopy in a period of 2 years. An earlier intervention will be performed if they become symptomatic.

As the true prevalence of esophageal cysts is unknown[2], it is very likely that in many patients, like in these four described by us, they cause no symptoms, remain undetected and require no intervention at all. Increasing availability of new diagnostic modalities such as EUS may change the current view regarding the prevalence of esophageal duplication cysts and prove that they are not rare findings.